Bright Raven Skies, the final book in Kristina Pérez’s Sweet Black Waves trilogy, is on the horizon, and we’ve got a look at the gorgeous cover reveal!

If you’re looking for a tale of epic magic, love, and adventure, then look no further than the Sweet Black Waves trilogy by Kristina Pérez. The second book in the series, Wild Savage Stars, hit store shelves in late August 2019, making way for the third and final book in this collection.

The Bright Raven Skies release date isn’t until August 25, 2020, so there’s quite a while to wait until you can get your hands on it, but that doesn’t mean we don’t have some great information for you, regardless. First up is the amazing cover for the conclusion to this trilogy.

Check out the cover for ‘Bright Raven Skies’ 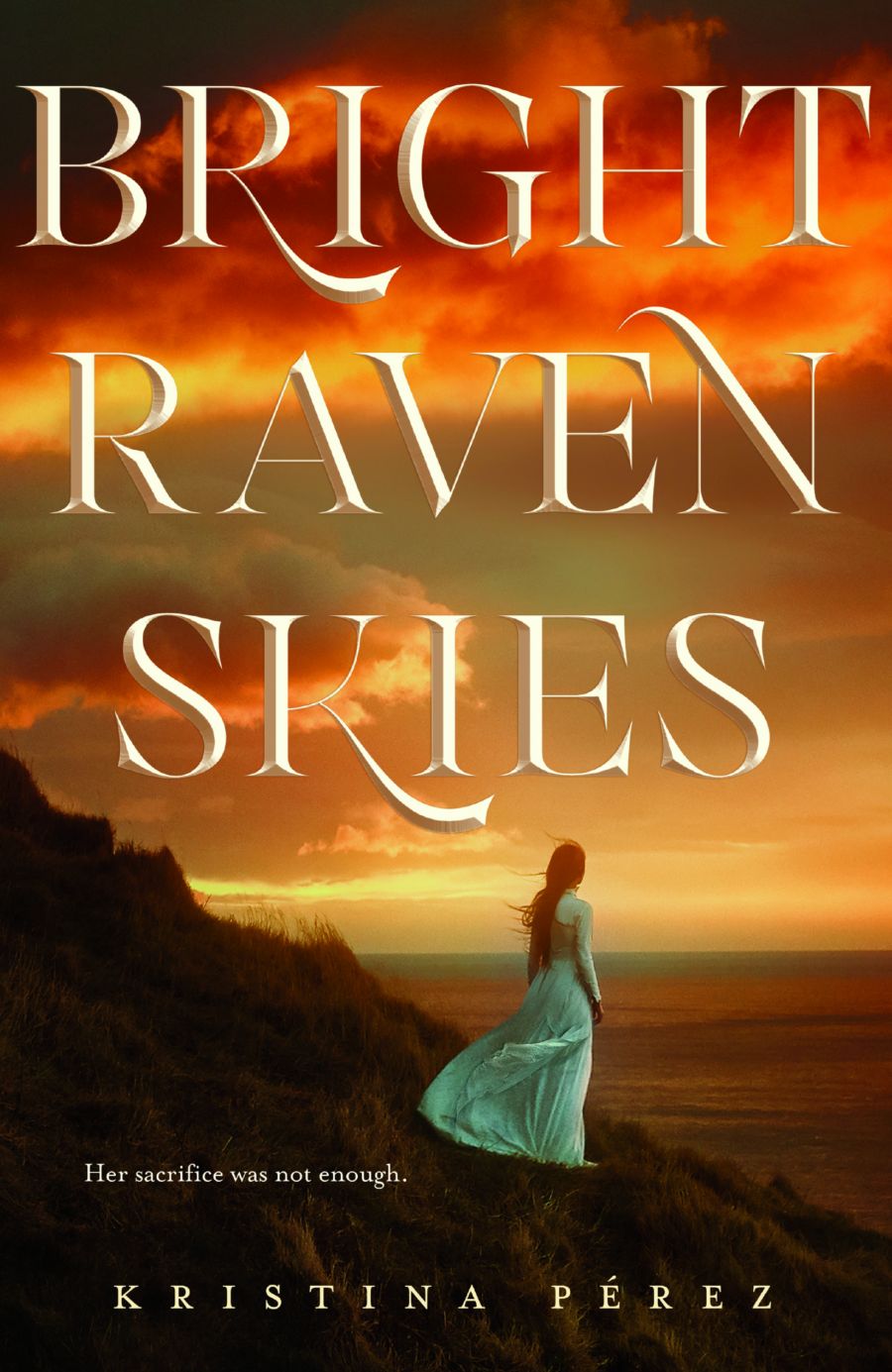 With orange-tinted clouds and a sweeping landscape, it’s hard not to get sucked into Bright Raven Skies’ cover. It’s only enhanced by the stoic figure of our heroine standing in a sea foam green dress on the edge of a cliff, overlooking the vista.

While we don’t yet have a sneak peek at the upcoming novel, author Kristina Pérez did join us to talk about the importance of myth and exactly which one inspired the Sweet Black Waves trilogy. You can also read the official Bright Raven Skies synopsis at the bottom of this article.

Who are the Mythmakers?

Some of my most vivid memories from growing up are of long drives in the family station wagon with my parents singing along to music from the 1960s –– their era, as they called it –– including “Love Potion No. 9,” penned by American hit makers Jerry Leiber and Mike Stoller.

The song tells of a man so unlucky in love that he seeks out a potion to help him find it. The spell backfires spectacularly and the hapless fellow ends up kissing everything he sees. Singing in the car, I learned the lyrics by heart, unintentionally, unconsciously. It wouldn’t be until years later that I realized the love potion in question was part of our Western cultural inheritance, which can be traced to the medieval legend of Tristan and Iseult, and even further back to Celtic mythology.

This is how myths are perpetuated. Like the troubadours singing of Tristan and Iseult’s doomed love –– and the love potion that caused it –– at the 12th-century court of Eleanor of Aquitaine, the crooners of the 1960s transmitted a part of their tale to a new generation nearly a thousand years later. As a kid, I absorbed the idea of a love potion uncritically, like a sponge, and it became part of my understanding of the world. Myths inspire us and terrify us in equal measure, they warn us of danger and give us hope; they drive at the most basic human emotions: the fear of death and the need for love.

The purpose of myth is to bring order to chaos –– to explain why the seasons change or assure us that the sun will rise again tomorrow. Myths help us navigate a universe that is fundamentally out of our control. French intellectual Roland Barthes argued that “myth is a language” and, indeed, we make references to myths in our every day speech.

Have you ever been warned, “Don’t open Pandora’s Box?” or “Don’t fly too close to the sun?” You might not remember the details of the myths behind the warnings, but you understand their meanings. Myths are instructional and so intrinsic to our behavior and societal structures that they are embedded into language itself. Myths are a shorthand we use reflexively to express ourselves and describe our experiences.

“Love Potion No. 9” has been the name of many perfumes for women since the song’s success because the marketing is implicit: Wear this fragrance and everyone will fall in love with you. Whether the consumer knows the perfume is referencing Tristan and Iseult is immaterial because the deeper meaning is understood. Never mind that both the medieval legend and the 1960s song are essentially warnings against using magic to coerce love, advertising agencies know the desire for “true love” is so ingrained in our culture, and has been held up as the pinnacle of female achievement for so long, that consumers are willing to take the risk. That is the power and pervasiveness of myth.

Which is why myth can also be dangerous. Myth is inherently political because it gives structure to our world: It tells us who should be in charge, who is central to the narrative, and who should be pushed to the margins. Myth is a language that can be weaponized to exclude those perceived as “other.”

As a storyteller, I must ask myself, “Whose purpose do these myths serve? Whose agenda do they advance?” The vast majority of our foundational Western myths from the Odyssey to King Arthur promulgate a white, male, heteronormative worldview. Therefore we, as creators, need to take stock and reevaluate these myths critically before employing their language in our own works.

In the Sweet Black Waves trilogy, I set out to retell the Tristan and Iseult legend from a feminist perspective and to give a voice to those too often silenced in myth: the women. Who are the mythmakers? We are.

Bright Raven Skies is the thrilling conclusion to the lush and heart-wrenching romantic fantasy trilogy about ancient magic, warring families, and star-crossed lovers.

To save the kingdom, Branwen embraced the darkest aspects of her magic. But she may have lost herself –– and the two people she loves most.

Tristan and Eseult are missing. As Branwen searches for them, she must hide the truth surrounding their disappearance from both the king and her lover. Above all, she must find the Queen and her Champion first.

New and old enemies circle Branwen, clamoring for power and revenge, and threatening to destroy the fragile peace that she has sacrificed everything to secure.

The release date for Bright Raven Skies by Kristina Pérez is August 25, 2020.