Those who binged Bridgerton have been eagerly awaiting to hear if Netflix would be renewing the Shondaland series can rest easy knowing a season 2 is officially on the way.

On Thursday (January 21) Netflix announced that it has officially renewed the hit period drama for a second season.

The online streaming giant unveiled the good news in the form of a special edition of one of Lady Whistledown’s society papers— which also clued fans into the fact that production on Bridgerton season 2 is gearing up tp start incredibly soon.

“The ton are abuzz with the latest gossip, and so it is my honor to impart to you: Bridgerton shall officially return for a second season. he incomparable cast of Bridgerton will return to production in the spring of 2021,” reads the announcement.

In addition, it also reveals that this time around, the story will revolve around Lord Anthony Bridgerton (Jonathan Bailey) who “intends to dominate the social season.”

“I have my pen ready to report on any and all of his romantic activities,” promises Lady Whistledown. “However, gentle reader, before you set the comments section alight with requests for more sordid details, know that I am disinclined to report on the particulars at this time. Patience, after all, is a virtue.” 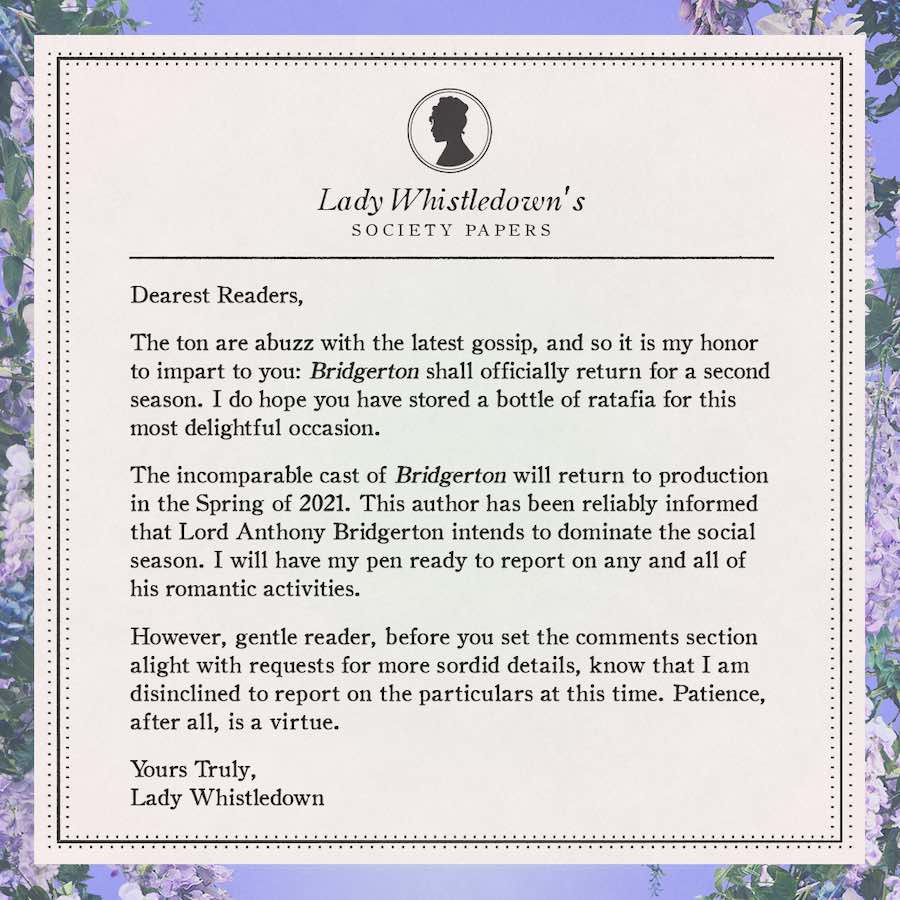 Shortly after news broke, Bridgerton‘s official Twitter account took to the internet to spread the good news with fans far and wide about season 2.

“Prepare for another social season,” tweeted the account. “Bridgerton is returning for season two, only on Netflix.”

Prepare for another social season. Bridgerton is returning for season two, only on Netflix. pic.twitter.com/yqapEULKz4

Currently, there’s no word on when we can expect Bridgerton season 2 to premiere.