All Eyes on Us by Kit Frick is Pretty Little Liars meets People Like Us. Check out an exclusive excerpt from this tense thriller!

It’d be bad enough if someone told you your boyfriend was cheating on you, but what if they took it a step further? How far would someone go to break the two of you up, and what would be collateral damage along the way?

Author Kit Frick shares with us an exclusive excerpt from her next novel, All Eyes on Us, from Amanda’s perspective. Here, she sets the scene:

For the past two weeks, small town queen bee Amanda Kelly has been receiving strange text messages — some flattering, some threatening — from someone masked behind a private number who wants to come between Amanda and her long-time boyfriend, real estate heir Carter Shaw. She’s convinced the messages are coming from Rosalie Bell, the girl Amanda suspects is trying to steal Carter away from her. As Amanda walks into school on this January morning with her best friends Trina and Adele, they’re in the middle of dissecting the latest messages when they’re interrupted by Ben Gallagher, a classmate on the fringes of their circle of friends.

And now, an excerpt from ‘All Eyes on Us’ by Kit Frick

We push through the main doors to Logansville South, and it’s like walking into a wall of sweaty boy sound. Half the wrestling team seems to be staging an impromptu match outside the auditorium doors, and a group of freshmen clog the hallway mouth, eyes fixed on their phones, too obsessed with completing this week’s Battle Pass challenge to notice we’re coming through.

“Watch it.” I shoulder one of the freshmen out of the way, in no mood for graciousness.

“Anyway,” Adele says when we’ve made it through the press of the main entrance, “I don’t buy it. She’s feigning ignorance on purpose.”

Suddenly Ben is walking with us like he’d been there all along. My already thin patience bottoms out.

“None of your business,” I snap at the same time Adele says, “Just some bitch who’s bothering Mandy.”

“Someone’s bothering you?” Ben’s face is filled with concern. He looks like he wants to hug me, but thankfully he thinks better of it and shoves his hands into his pockets. “Why would anyone bother you, Amanda?”

“Don’t worry about it. The situation is under control.”

We turn from the main hallway down the corridor that leads to my locker. I wish he would just leave. I wasn’t done debriefing with Trina and Adele, but I’m definitely not continuing this conversation with Ben Gallagher hovering.

“Isn’t the rest of the debate team waiting for you?” I put on my nicest voice, hoping Ben will get the hint.

He doesn’t. “Huh? We don’t have practice until Saturday.”

“Holy crap.” Trina stops in her tracks and flings out her long, skinny arms, pinning the three of us behind her.

I stare down the corridor toward a group of kids gathered in front of what might be my locker. Then again, it might be any locker in my alcove; it’s impossible to tell from here, especially with so many people milling around. Everyone is whispering and snapping pictures. All I can see for sure is that there’s something bright red on the floor, and everyone seems to be freaking out in a hushed, slow-mo kind of way.

I roll my eyes as he runs ahead of us down the hall like he’s acting out some video game. We ignore him and start walking. Whatever it is, it’s probably not a bomb. What does Ben think, he’s going to diffuse it before we arrive?

It’s obvious it’s my locker from the way people stare when I get close. A few people step aside, letting me in.

“What the hell?” My locker door is covered in blood. It’s streaked all down the gray paint and pooled on the floor in front. Resting in the middle are a dozen formerly white roses, now stained a sticky red, and a small teddy bear. Trina digs in her bag for her Canon and starts snapping photos.

Ben touches my elbow, and I flinch. “I don’t think it’s real blood,” he suggests. “It’s too bright. It looks like corn syrup mixed with red food coloring, like they did in old movies.”

“Thanks, Sherlock,” I spit. Then, I spin around and glare at all the shocked, vacant faces. “Who did this?” I shout. “Who saw something?”

No one says anything. They just stand there like a herd of big-eyed cows.

“Seriously? There are like eight hundred people in this school. No one saw who did this?” My locker alcove may be in a low-traffic zone, but this scene is unmissable.

My skin is hot; I can feel bright red blotches breaking out across my face and neck. This is not okay. This is taking things way, way too far. I reach down and snatch up the teddy bear. I need to throw something. I need everyone to get out of my face.

Adele lets out a shriek. The bow tied around the bear’s neck falls to the side, and its head plops down into the pool of fake blood, splashing sticky red syrup on our boots. Yellow stuffing pokes out where its head should be. I’m so startled, I drop the body, and it sprays us with even more syrup.

“Oh my god.” My hands are shaking.

“Who the hell did this?” Ben shouts into the crowd. No one answers.

About ‘All Eyes on Us’

PRIVATE NUMBER: Wouldn’t you look better without a cheater on your arm?
AMANDA: Who is this?

PRIVATE NUMBER: I’m watching you, Sweetheart.
ROSALIE: Who IS this?

Rosalie Bell is fighting to remain true to herself and her girlfriend — while concealing her identity from her Christian fundamentalist parents. After years spent in and out of conversion “therapy,” her own safety is her top priority. But maintaining a fake, straight relationship is killing her from the inside.

When an anonymous texter ropes Amanda and Rosalie into a bid to take Carter down, the girls become collateral damage — and unlikely allies in a fight to unmask their stalker before Private uproots their lives.

PRIVATE NUMBER: You shouldn’t have ignored me. Now look what you made me do…

All Eyes on Us by Kit Frick hits store shelves on June 4, 2019. In the meantime, you can pre-order it from Amazon, Barnes & Noble, IndieBound, and Book Depository, or add it to your Goodreads list. 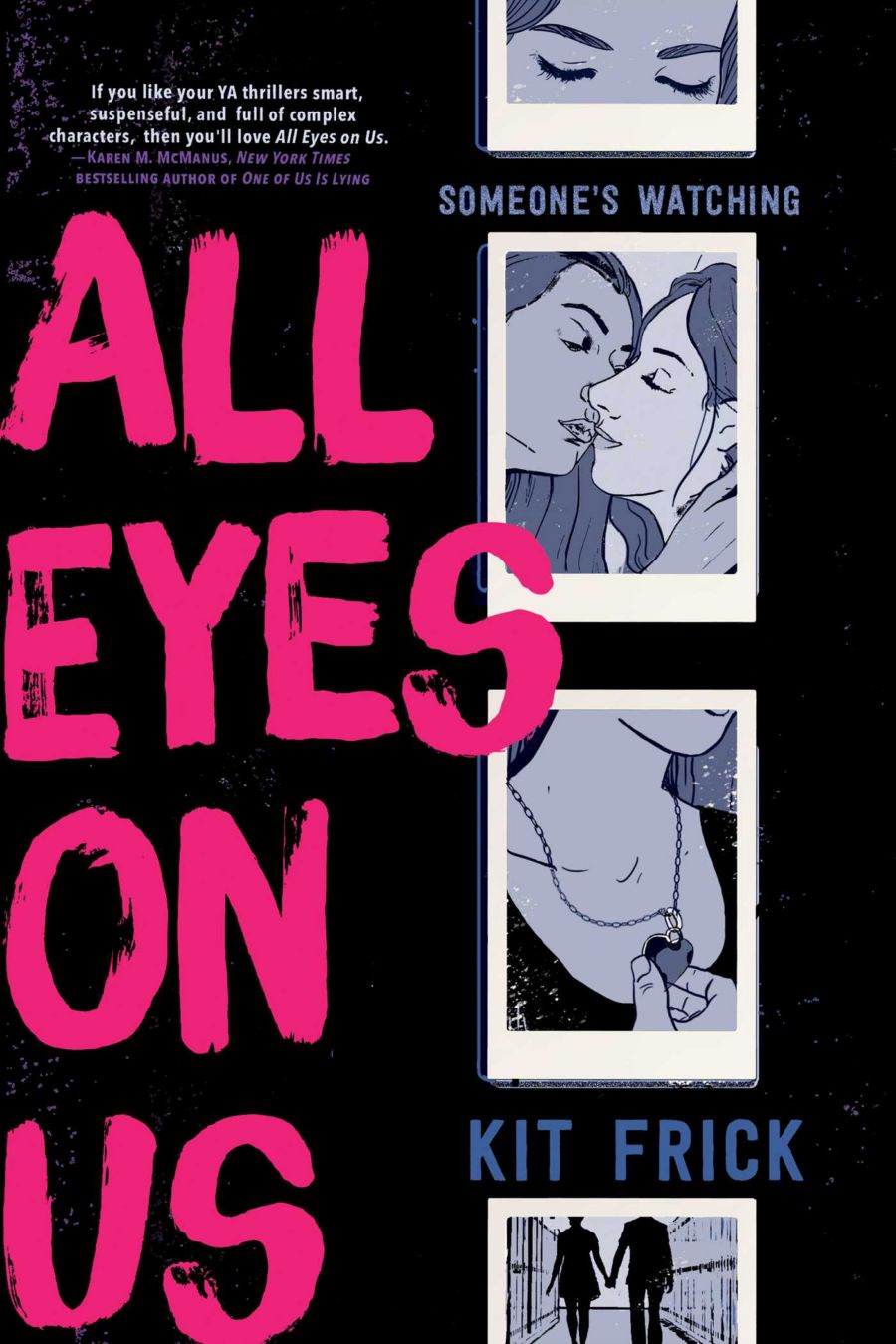