We use cookies to ensure that we give you the best experience on Hypable. If you continue to visit us, we will assume that you are happy with it.
3:45 pm EDT, June 3, 2019

Jeff Ward spills the beans on Deke’s return to ‘Agents of S.H.I.E.L.D.’

Deke’s back on Agents of S.H.I.E.L.D., and Jeff Ward gives his take on romance, adventures, and finding a place with the team.

Agents of S.H.I.E.L.D. 6×04, titled “Code Yellow,” served as a cheeky reintroduction to Deke Shaw — and the episode wasted no time in bringing back the derpy grifter fans know so well.

Picking up after a year on Earth in the present time, “Code Yellow” presents Deke as a startup entrepreneur making money off ideas cribbed from S.H.I.E.L.D. and from the future. FitzSimmons’ rather impossible grandson has adapted unnervingly well to modern life, but his happy bubble of video games and boba tea is emphatically interrupted when both Sarge and Team S.H.I.E.L.D. come knocking on his glass door.

Actor Jeff Ward takes us inside what it was like to flip the tables on Deke’s life once again, and what the rest of Agents of S.H.I.E.L.D. season 6 will hold for his irrepressible character.

“Code Yellow” is a really unique blend of comedy and drama. What was it like to film as your return episode?

It was amazing. Agents of S.H.I.E.L.D. is so deft with how they handle drama, comedy, action, all of these very different elements and how they marry them all really beautifully. Nothing ever feels out of place. And that’s how it was for this episode. It was so funny and it was so fun. The second I read it, I was just so excited.

How did you feel about Deke’s turn as an ’80s action star?

I grew up on everything from cheesy to very good action movies. Lethal Weapon and Die Hard, to the cheesiest Schwarzenegger… where he hits [the antagonist] with a steam pipe and tells him to “let off steam.” Those kind of those one-liners, I grew up on them.

So when it was a scene jam packed with one-liners, it then reveals itself to be almost a scene out of a John Hughes movie, it was so exciting and so thrilling, and really just fun. And kind of the stuff that you dream as an actor to be a part of, because it has all of those elements. Everybody was very excited for me to read the episode, and when I did read it and saw what we were doing, I was truly thrilled and it did not disappoint. So, I hope that comes through when you’re watching it, because it was a blast to make.

Put us in Deke’s mind for a minute. Did he really think he was going to get away with cribbing S.H.I.E.L.D. tech for his company? I think when he gets here and he starts exploring that, I really think that he quickly figures out that everything here’s about money. If you have money and you have the power and respect, I’m sure it crosses his mind that maybe that’s how you get a certain Inhuman girl to notice you.

So I think one thing sort of led to another, and next thing he knew, he became insanely successful, bigger than he planned. And so when S.H.I.E.L.D shows up, I feel like he’d say “It’s definitely a surprise,” but I think also from the way Coulson and Deke’s talk… I think that he quickly is like “Oh. Okay. I knew this day would come.” But now it’s actually here, it’s kind of like, “Oh, just give me a slap on the wrist.” Thinking that he’s talking to Coulson, [Deke thinks] he’ll be able to talk his way out of it. But actually this is not something that he can talk his way out of clearly.

And what’s the plan for Deke now that’s he back in S.H.I.E.L.D. custody? Will he rejoin the team, or try and get out as fast as possible?

Well, I think he’s trying to figure that out, because he doesn’t really belong there. He’s sort of a man without a country right now and is trying to figure out exactly what his place is, and who he is, and who he to these people, and who these people are to him. I think that he is going to probably take some time. Obviously where he’s from, always looking out for himself and survival was the most important thing. And now, it’s kind of like, is it the most important thing? He’s got to figure that out. So I think he’s going to be asking those questions the rest of the season.

What was it like to work with your boss, Maurissa Tancharoen, as a scene partner?

Oh, so amazing. So fun. Maurissa is so great. It was amazing, because she had to kind of step back. Every time we were figuring something out, we would — whoever it was, whether it was the director, the writer, somebody would give their suggestion for a solution to something, or an answer to a question, and [we] kind of had this weird question mark at the end of sentence, and we’d just look at Maurissa like, “Is that okay?” [And she’d say,] “I don’t know what do you think?” 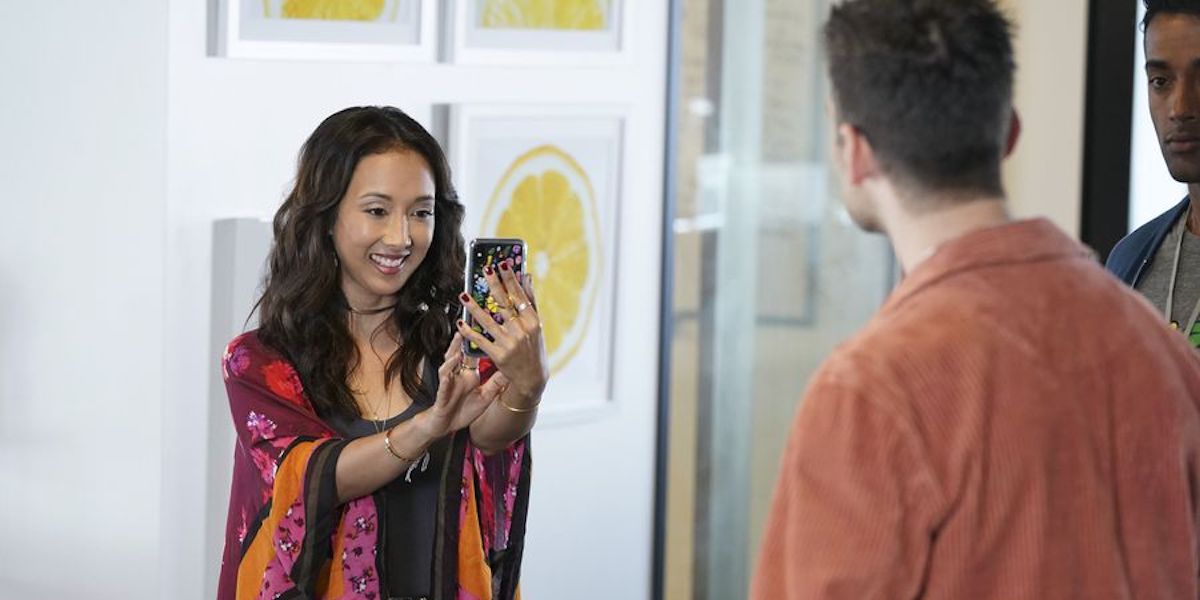 She did a really great job of letting everybody do their thing and she was like “I’m just here as an actor.” She would throw her two cents in if she needed to, but it was cool that she let everyone do their thing and just concentrated on playing Sequoia, which was just so much fun.

Everybody’s been waiting a long time for her to have a little cameo on the show. I felt very excited and very honored that I was the one that she was going to be acting with. It was awesome.

Agent Khan seems to have made a big impact on both Deke and Sequoia, can you tease if we’ll be seeing him again?

I would say keep your eyes peeled. I’d say you might, you might not. I mean- I just feel like, he’s a friend of Deke’s and it just would be so nice if he could get just a little bit more of a friendship from him.

That would be awesome. Deke doesn’t have many peers for several reasons.

That’s what I’m saying. That’s the best way — it would be a shame to lose him, you know. I hope they meet back up, and I think they might.

Daisy recently confessed that she wishes she had “her own Fitz.” Between Deke’s interest in her and genetic connection to Fitz, is that a sign that things may be moving forward romantically for them?

I, gosh, I hope so. Just for Deke’s sake, I really hope so because he’s got it bad!

And can you tease what fans can look forward to in the rest of season 6?

It’s very different I think than anything else the show has done. I think it turns ways that people won’t really see coming, and I think there’s also a lot of fun to be had. A lot of the other characters that are introduced this season are really fun and really great. Karolina Wydra is so excellent. She comes in in a few episodes.

I think specifically that Deke spends the rest of the season figuring out his place in the team, or whether it’s with the team at all, or on his own. I think he spends the season kind of figuring out what it is that he wants and who he is. And he kind of asks himself that, and finds out through spending some more time with the team, and seeing where that takes him. That’s some bit of season six.