The Agents of S.H.I.E.L.D. series finale wrapped up a few relationships, while leaving others to linger. The cast and crew shared their thoughts on ships, family, and what goes beyond.

There remains plenty to digest about the Agents of S.H.I.E.L.D. series finale, whether it be time-travel, adventures with potential “Agents of S.W.O.R.D.,” or simply how Marvel’s flagship show managed to predict that we’d all be communicating virtually in 2020.

But a pressing concern for many fans is the question of the show’s intense personal relationships, which were arranged in varying states of completion by the finale’s end. The team as a whole, of course, maintains their profound bond, even as they appear to be destined never to reunite in person. (Fate hack: Futuristic and way less awkward Zoom calls!)

On the romantic side of things, Chloe Bennet (and several of her co-stars) couldn’t be happier with Daisy’s choice of Daniel Sousa as her partner.

“He’s so stable, and so supportive, and so willing, and so understanding of who she is,” Bennet says. “[Daisy needs] that kind of stability in her life, and that support. And I think it doesn’t hurt that he’s a strapping young man!” 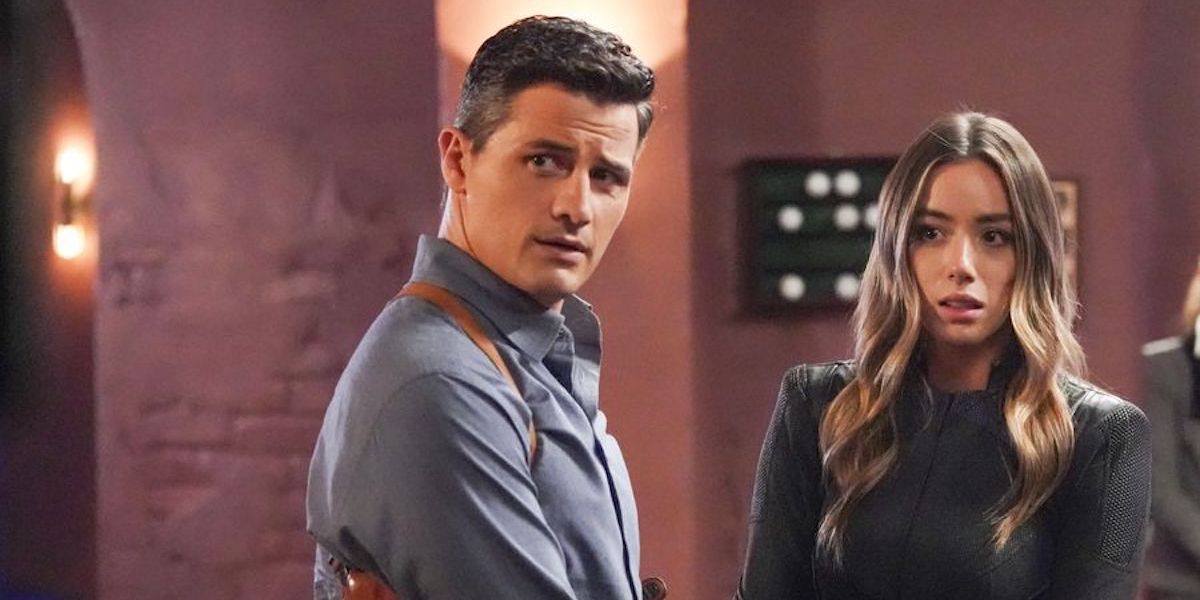 “She has become such a kind of a power house, physically,” Bennet continues. “I love that he kind of brings her down to Earth a little bit.”

For Enver Gjokaj, Sousa’s relationship to Daisy’s power was a crucial factor in their developing bond.

“They don’t seem to have a lot of [things] in common,” he notes, “But the fact that he’s attracted to strong women, and that he’s worked with strong women in his past, and that’s who he is — I think that becomes the foundation for a relationship. The fact [that Daisy’s power is] not threatening to him at all, that that’s actually a positive, that… made total sense to me.”

“And [Gjokaj] played it with such a quiet confidence, and just you’re so grounded,” Bennet continues. “Sousa is so grounded in himself, and he’s not threatened by her as an entity and by Quake, and it actually finds it slightly amusing. which I think is really sweet, actually.” 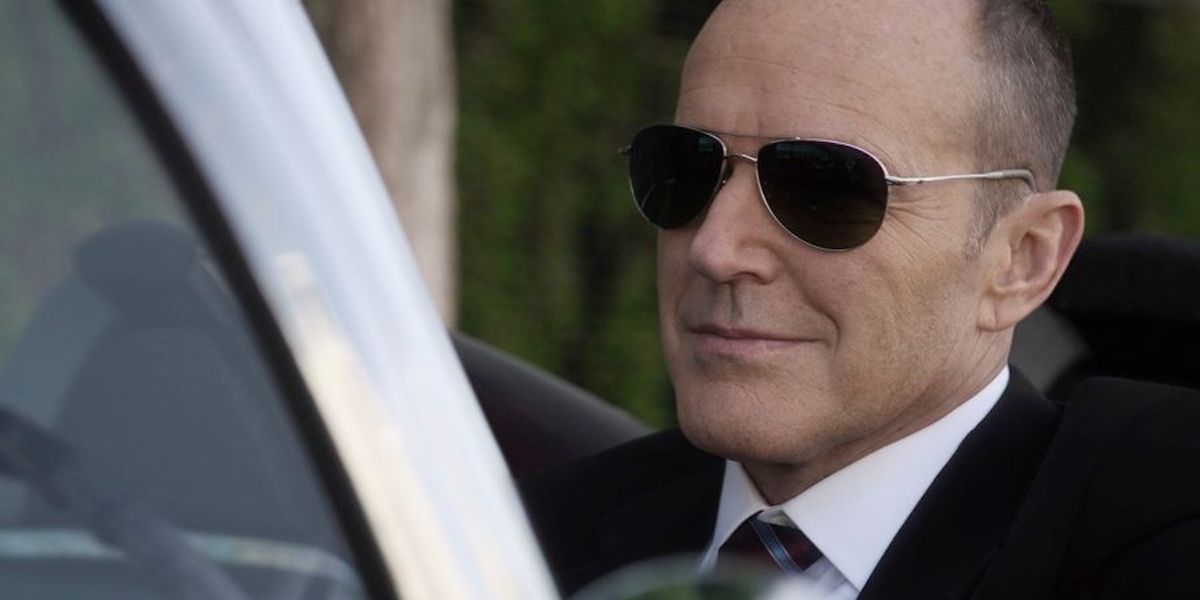 Clark Gregg also expressed a certain relief at Daisy’s choice, which he feels reflects maturity on the part of friend and castmate Bennet.

“One of the things that happens, especially when you do play a character for 200 years as I have… is that the life and art blend together,” he says, noting that it was challenging to repeatedly “watch Chloe/Daisy go through these various things and get her heart broken, and have people die.”

So “to have Enver show up and create — recreate — the new version [of Sousa], dealing with different kinds of stuff, was just cool!” Gregg says. The character’s new incarnation on Agents of S.H.I.E.L.D. was “tough. Not calling attention to himself. It felt so real, and I love so much what he did, and the way that [he and Chloe] just kind of quietly backed into this thing that everybody has been rooting for. [It’s] such a testament to their work in the chaotic final season, and how lucky we were to get Enver. It’s just facts!”

For their part, showrunners Jeff Bell, Maurissa Tancharoen, and Jed Whedon felt it was critical that their cast of female characters be seen as much more than partners in relationships, regardless of how matters concluded. 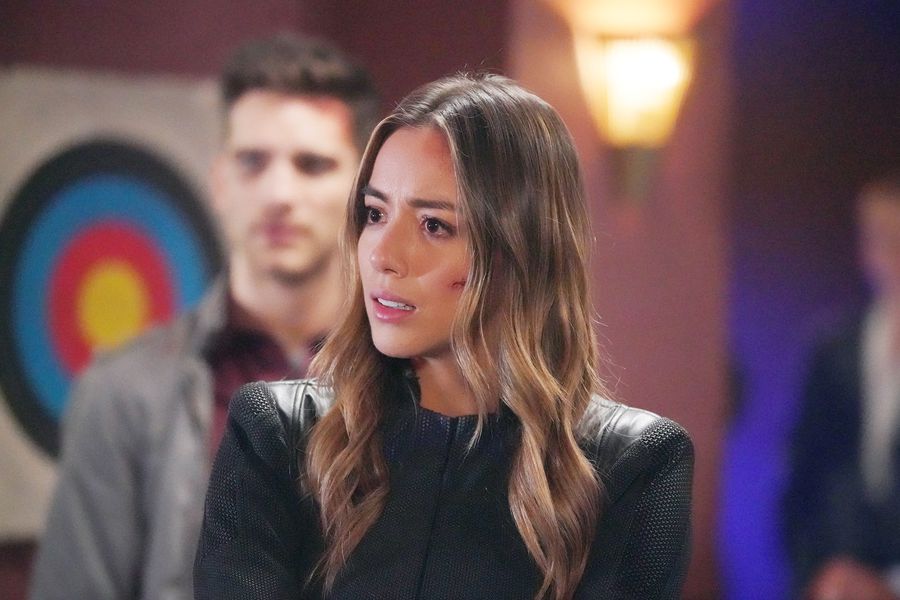 “They’ve had relationships [but] we never defined them by that,” says Bell. “But Daisy hasn’t had great luck in the past, bad things that happened or it hasn’t worked out. And so when Enver showed up, it was more than we could have imagined. We’d hoped that they would have chemistry, and the fact that it worked so well was great.”

Bell also observes that even more significant than the romantic developments was Daisy’s re-formation of a new kind of family for herself.

Related: The Agents of S.H.I.E.L.D. team reflects on that [SPOILER] final scene

It was important, he says to let Daisy’s sister “Kora come over at the end and [give] Daisy family to continue. So it wasn’t just ‘Now I have a boyfriend!’ It was like she had a new unit. I think that was something that happened organically through the force of the storytelling that was a nice thing that we hadn’t foreseen.”

“The whole drive of Daisy’s character arc was, she was in search for her identity. She was in search for her family and where she came from,” agrees Tancharon. “And what she stumbled upon was new one, and so at the end, it’s very clear that she is actually starting her own little family in space, with the man she loves and her actual sister.”

Where other connections are concerned, Tancharoen, Whedon, and Bell are content with varying degrees of resolution.

“Fitz and Simmons are a forever love,” Whedon says. “From the moment they auditioned, that was written in the stars. And you can feel Mack and Yo-Yo’s connection, and how proud they are of each other.”

Tancharoen feels similarly about May and Coulson’s connection, which echoes through the final scene of Agents of S.H.I.E.L.D., regardless of the pair’s particular romantic status.

“The way [May] looks at him as he’s speaking about what’s next, it’s very clear that all the love that they have for each other will remain, even though they will not be in each other’s lives the way once were,” Tancharoen observes. “I think that was the useful tool of jumping a year later, to feel that they have settled into their new lives without one another.” 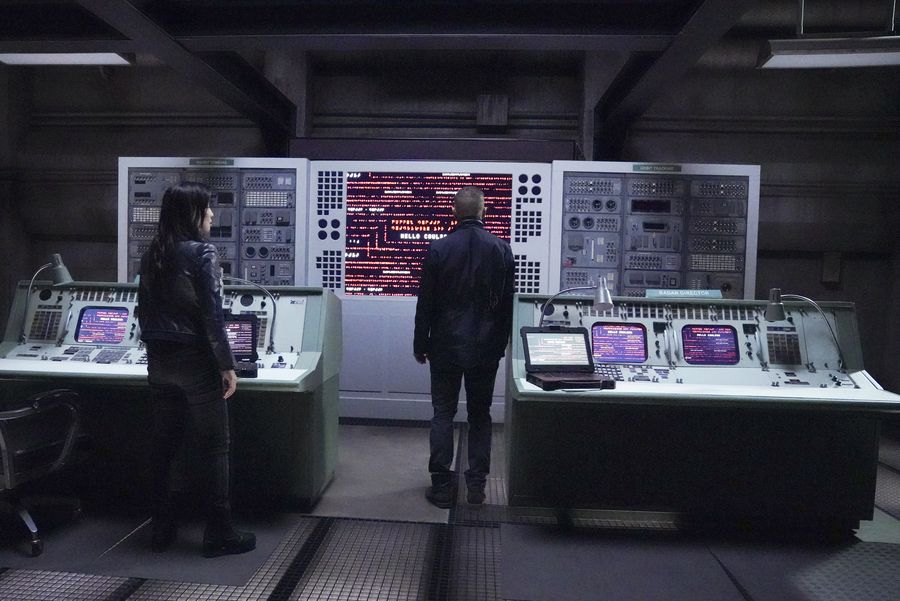 “But there’s still that longing, and then to put them in a room where it’s very clear that this bond will be there till the end of time, but they can’t touch one another –It’s a little awkward. I think we were really trying to hit the bittersweet of that, the grieving of what was while celebrating what is.”

“We watched the characters just grow up, and so there’s a lot of young love early on, and where you end is with fairly mature, complex relationships. And there is a nostalgia, or bitterness, or a comfort with it,” Bell adds. “May and Coulson — I call them the elder statesmen, though they’re not old — compared to everybody else, it was a different kind of love then a puppy love that we saw in other characters over the course of the seasons.”

“By season 7, I think everyone has matured into really interesting, complicated people, and they can get along with their differences and they don’t have to agree with everything, and everybody’s had conflict with everybody else. But at the end of the day, they come together.”

“One of the things that we like about how it goes, how it ends is, it sort of allows the fans to imagine what’s next,” Whedon says. “I think that we definitely had our own feelings and our debates over the years about different relationships, but I think you can get a real sense of the ground they stand on at the end.”