We use cookies to ensure that we give you the best experience on Hypable. If you continue to visit us, we will assume that you are happy with it.
9:00 am EST, February 21, 2020

Harry Potter Spells: A complete list of what they all do

Harry Potter Spells: A complete list of what they all do

Need to unlock a door? Disarm an enemy? Fix a broken object? There’s a Harry Potter spell for that! In the Harry Potter universe, there is a spell to fulfill any need, from the everyday to the extraordinary. Below is a list of all Harry Potter spells known to wizard and what they do. For your connivence, this spell list is in alphabetical order, from A – Z!

All Harry Potter spells: A list of what they do

Get practicing all of these Harry Potter spells — make sure you’re prepared to traverse the Wizarding World! And if you love Harry Potter, take our quick-and-easy 2-Question Sorting Hat Quiz, and brush up on your Harry Potter cast list!

You should also listen to MuggleCast, the weekly Harry Potter podcast discussing Fantastic Beasts, the original Harry Potter books, and so much more.

All of the spells below have been mentioned in either the book or film series. At the end of the list, you’ll find newer spells that’ve only appeared in the Fantastic Beasts film series.

– Accio: Summoning Charm; used to summon objects toward the caster (usually from a long distance)

– Aguamenti: produces a jet of water from the caster’s wand

– Avada Kedavra: the Killing Curse; causes a green flash of light; Harry Potter is the only known survivor of this curse; one of three Unforgivable Curses banned by the Ministry of Magic

– Bubble-Head Charm: creates a bubble of air around the caster’s head and mouth, acting as a breathing apparatus

– Cheering Charm: causes the person upon whom the spell has been cast to become happy and content

– Colloportus: used to magically lock a door and prevent it from being opened by non-magical means

– Confringo: Blasting Charm; causes items the charm comes in contact with to burst into flames

– Crucio: causes the victim extreme pain; one of three Unforgivable Curses banned by the Ministry of Magic

– Expecto Patronum: used to cast a Patronus (a physical manifestation of one’s most positive feelings), which guards against dementors and can be used for communications 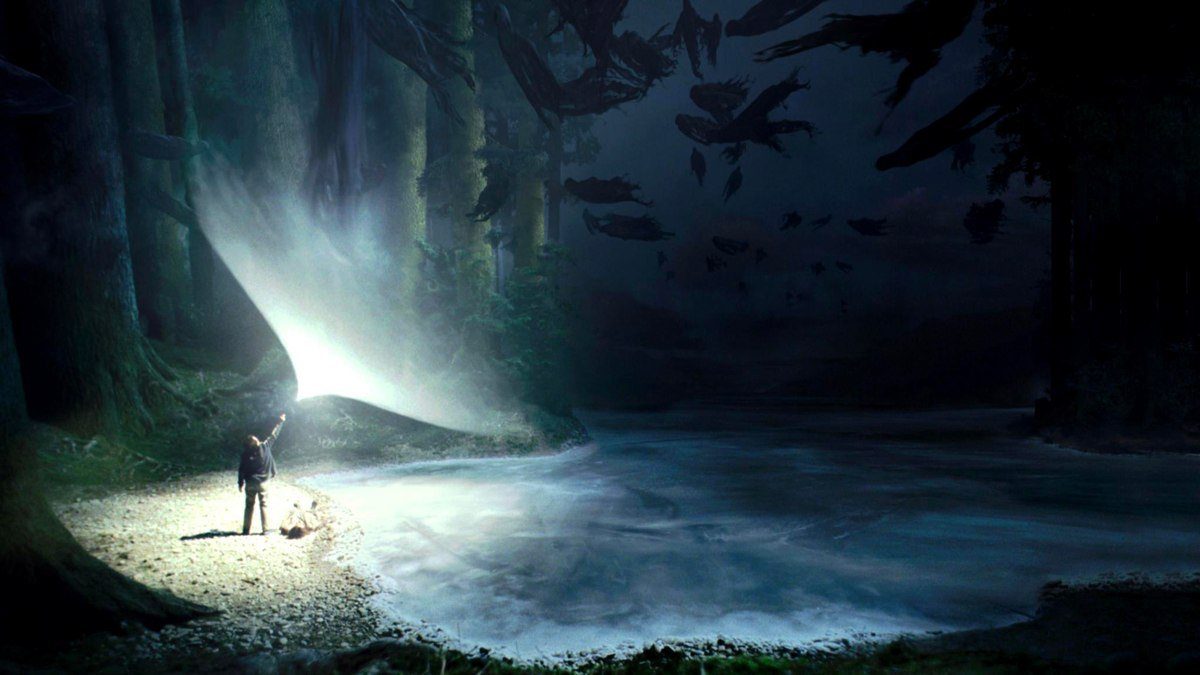 – Expelliarmus: used to disarm another wizard

– Impedimenta: Impediment Jinx; prevents the victim from approaching the caster (by knocking back, tripping, etc.)

– Imperio: removes the victim’s free will and ability to make decisions for him- or herself; one of three Unforgivable Curses banned by the Ministry of Magic

– Impervius: causes objects to repel outside forces, such as water

– Levicorpus: a nonverbal spell that causes the victim to be dangled upside down by his or her ankles

– Locomotor: causes an object to rise and move at the command of the caster

– Lumos: projects a beam of light from the user’s wand

– Muffliato: used to prevent conversations from being overheard by filling the ears of those nearby with an unidentifiable buzzing noise

– Reducto: Reductor Curse; breaks objects and in its strongest form has the ability to disintegrate them

– Rennervate: revives the victim of a Stunning Spell

– Relashio: causes the victim to release whatever they are holding

– Rennervate: revives someone who has been Stunned

– Revelio: a revealing spell; first used in the Fantastic Beasts film to reveal Graves is Grindelwald

– Riddikulus: spell used when fighting a Boggart; causes the Boggart to transform into something the caster finds humorous

– Sectumsempra: spell that causes deep gashes on the victim’s body

– Silencio: used to make something silent

– Stupefy: used to stun a victim

– Taboo: a jinx that can be placed upon a word so that when the word is spoken, a magical disturbance is created which alerts the caster of the Taboo

– Unbreakable Vow: causes the vow being taken by the witch or wizard to be inviolable with the consequence of death if it is breeched – Appare Vestigium: Tracking spell that “materializes as a swirl of gold” and shows “traces of recent magical activity.” Used by Newt to track beasts and Tina.

– Avenseguim: Takes an object owned by someone and turns it into a way to track that person down. Newt used the spell on the feather from Kama’s cap to find him.

– Finite: A spell to counter Protego Diabolica. Used by Flamel and friends. We’ve seen this one before, but not in this way.

– Nebulus: Creates a swirling fog. Used by Dumbledore to stay under cover, descends over London.

– Protego Diabolica: Creates a protective circle — those who are truly on Grindelwald’s side can walk through the flame. Notably, Rowling describes the flame twice as a “black fire,” but in the movie it’s blue.

– Ventus: A spell to create a hurricane-force wind, used by Newt to repel the Auror Stebbins.