Fast-paced and full of political intrigue and danger, Stacey Abrams’s newest thriller While Justice Sleeps is the perfect summer read.

With only a couple of weeks left in the court’s term, Supreme Court Justice Howard Wynn mysteriously winds up in a coma. Weirder still is his choice of legal guardian and decision-maker: His young clerk Avery Keene.

Tasked with not only the decisions around his medical care, she’s also sent on a perilous search by Justice Wynn to uncover the political scandal of the century. One that has left a slew of bodies in its wake and continues to threaten all those who even catch a glimpse of its many secrets.

Set up like a complicated in-progress game of chess with an outcome that only Justice Wynn knows, Avery must play to her strengths and figure out who she can trust in order to see justice done before she, too, is taken off the board.

I’ve never personally been a habitual reader of political thrillers, but Stacey Abrams, the incredibly impressive Georgia-based voting rights activist and politician, may have just made a fan out of me with While Justice Sleeps. This novel is a fantastic political thriller that’s easily accessible for those new to the genre as well as those who may not be well-versed in the ins, outs, and minutiae of politics. Abrams’s extensive knowledge of the system, its strengths as well as its vulnerabilities and loop holes, is on full display throughout the novel as she makes effortless work of distilling and conveying even the most complicated concepts and situations as they relate to the law and the inner-workings of the United States government.

I realize that that may sound a bit dull, but, in fact, at Abrams’s fingertips, it’s quite the opposite. She infuses such energy and stakes into even the most mundane aspects of government life, going into just enough detail in explaining concepts and how that detail affects the plot and the characters without overloading the reader with unnecessary bureaucracy. For instance, I’ve never found D.C. parties to be all that interesting (as, to me, it’s just a bunch of egomaniacs boasting to each other in a room), but Abrams writes those interactions with such nuance that even the slightest glance had me eager to read more.

It’s not just her depiction of governmental life and procedure that kept me turning the page, however; the intricate plot she has woven into While Justice Sleeps, with its many twists and turns, is perfectly-paced, never revealing too much or too little at any one time. And the sheer amount of meticulous planning and research that must’ve gone into the mystery? It’s astounding to me that so many seemingly random pieces come together in the way they do.

Did I become impatient at certain parts because I didn’t have the whole picture? Of course. But it was never ever to the point of frustration. Abrams always gives just enough to leave you wanting more.

As if the mystery and all of the clues themselves weren’t incentive enough to keep turning the page, the thriller aspect of the book is enough to keep your eyes racing down the page. There’s an element of paranoia that runs throughout the entirety of While Justice Sleeps, affecting each and every character as well as the reader.

To me, a large part of what makes this novel so thrilling is the fact that the drama and the danger feels far too real and probable, especially after living through the last five years as an American citizen. There’s so much under-handedness and two-facedness happening that it can sometimes feel overwhelming, if not unsettling. Certain characters are truly frightening because you know their real life counterparts are out there, deeply seated in the US government, and so the way these characters seek and kill for power and for the sake of feeling self-righteous will absolutely make your skin crawl. Yes, Avery Keene’s work and moral compass lend hope to the idea that not everyone connected to politics is terrible but… she almost seems more like the exception than the rule. 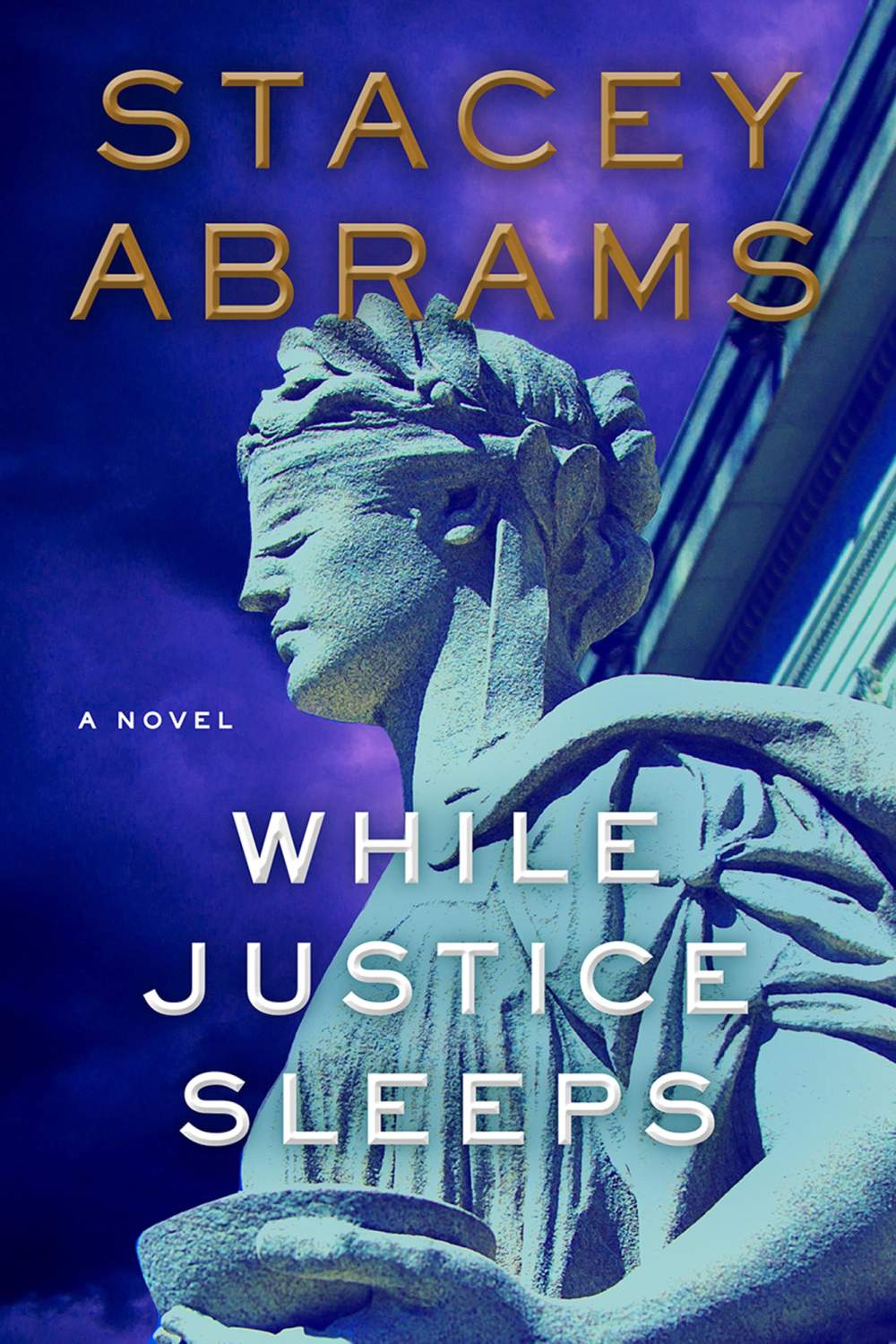 But what a wonderful exception she is. Avery is such a dynamic and root-worthy protagonist with a great balance of strengths and shortcomings. Her eidetic memory is convenient, sure, but she’s in no way infallible. She makes mistakes but owns up to them and always strives to do what’s best for the greater good. She’s also incredibly compassionate and will do anything those she loves, even if they may not deserve it. Not only that, but she seeks out and relies on the strengths of others, knowing her limits and when to allow her friends to help her. She’s one of the most dynamic protagonists I’ve read in a long while.

While she’s a fantastic character in her own right, I love Avery Keene even more when she’s paired with other characters, especially her friends. While Justice Sleeps has a really likeable and relatable group of people that become almost close-knit friends by the end. (And, I mean, in the face of a murderous conspiracy, it’s no surprise that this group bands together the way that they do.) They’re a great mix of personalities–an ex-military analyst, a whip-smart lawyer, a supportive but practical medical professional, and even a seasoned FBI agent–that play off of Avery so well. Separate, they’re all great at what they do, but, when together, they complement each other so well and bring out different facets of each other that would’ve otherwise remained dormant.

Honestly, I’d love an entire series of novels about Avery and her friends, but I’d also hate it because I wouldn’t want to witness them continually tortured and being put in danger like this again and again just for my pleasure. (I guess I’ll just have to settle for watching them in the upcoming TV adaptation based off of While Justice Sleeps!)

I haven’t read Stacey Abrams’s other books, political or romance, but she has such a skillful way with words that I want to seek out the rest of her works immediately. (Not to give anything away, but after reading While Justice Sleeps, I can’t wait to read how she writes romantic stories.) Her writing makes reading fun and engrossing, even when murder and/or bureaucracy is the subject.

Even if you’re not usually a reader of mysteries or political thrillers, I highly recommend picking up a copy of Stacy Abrams’s newest novel While Justice Sleeps. Full of suspense, realistic dangers, and characters you can’t help but want to spend time with, this book is the ideal summer read. It may not take your mind off of larger real-world issues, but it will give you hope for justice and equity being served by those with compassion and fairness in their hearts.

If you’ll pardon the pun, Stacy Abrams’s While Justice Sleeps is one book you won’t want to sleep on.

While Justice Sleeps by Stacy Abrams is now available from Amazon, Barnes & Noble, The Book Depository, or your local bookstore. Also, don’t forget to add it to your Goodreads “to read” list!

Schitt’s Creek may be over, but these Moira Rose quotes are still as iconic as the woman who uttered them.

Get a taste for what’s in store in The Mysterious Benedict Society by checking out the first trailer for the Disney+ series adaptation!

Jordan Fisher is gearing up to suit up for The CW’s The Flash, and now, fans can catch their first look of him in action as Bart Allen!

Henry Cavill in talks to star in ‘Highlander’ reboot

Lionsgate’s Highlander reboot might have just found its star in Henry Cavill.

The Last She cover reveal comes ahead of the novel’s launch in December. To prepare, check out these five fantastic dystopian novels.