We use cookies to ensure that we give you the best experience on Hypable. If you continue to visit us, we will assume that you are happy with it.
10:00 am EST, February 12, 2020

‘What I Like About You’ exclusive excerpt: When is a meet-cute not really a meet-cute?

Calling all meet-cute and rom-com fans! What I Like About You by Marisa Kanter is going to be your new book obsession and we’ve got an exclusive excerpt to tease you with.

Blogs, cases of hidden or mistaken identities, crazy meetings that you never thought would happen in a million years… What I Like About You has it all. Not only that, but it has it all just in this exclusive excerpt alone.

Honestly, if this excerpt doesn’t get you excited for this YA rom-com, nothing will. (It’s just that cute!)

Read an exclusive excerpt from ‘What I Like About You’

I feel it in my bones.

My cursor hovers over the email. It might seem small, waiting for a cover reveal, but it’s everything. Ariel Goldberg hasn’t released a new book in three years. In publishing, where so many popular authors are on a book-a-year schedule, this feels like a lifetime. Hosting a highly anticipated cover reveal like this one? One that should probably go to a major media outlet? It’s exactly what One True Pastry needs to keep the momentum, to rise above the everyone-has-one kind of blogs out there, to be noticed by industry professionals and impress NYU admissions.

Now that the email is here in front of me though, and I have the power to click . . . I almost don’t want to know. I thought no email was worse than a rejection. I take it back. Why did I ever think I wanted something in writing telling me I’m not good enough?

I wait a full minute, then click on the email before I change my mind.

I’m Alyssa Peterson, Ariel Goldberg’s publicist. I’m so excited to confirm that Ariel would LOVE for One True Pastry to host the exclusive cover reveal for Read Between the Lies.

I reread confirm and love twelve times before I am convinced that’s really what it says.

I got the Ariel Goldberg cover reveal. Me, Kels from One True Pastry.

I slam my computer shut.

The sound reverberates through the silence.

Sorry, I mouth to the person sharing my table, trying to contain the stupid smile that must be spreading across my face. I make eye contact with him and for the second time in literally thirty seconds, I don’t believe what I’m seeing. I blink once.

“Good news?” he asks—but really, he’s trying not to laugh.

How am I speaking? How am I breathing?

He isn’t a hallucination.

I don’t know how to explain it so it makes sense. Nash. It’s me, Kels. We were just talking about how I’ve never seen Lord of the Rings and oh, by the way, I got the cover reveal! I’m Kels— except I’m not Kels, I’m Halle. But . . . you can call me Kels. Though everyone else will probably call me Halle, so that could get weird. But yeah! Wow! Hi!

He’s so boyish in person. Without the thick black hipster glasses he wears in his Twitter picture, he looks younger. His dark hair is longer, too, falling into his eyes. His eyes. I knew they were brown, but they also have specks of gold—I had no idea. I don’t think I’ve ever thought of him as a height, but he’s tall and all limbs. I mean, Kels knows he runs track. But now I see it, you know? I see how all the pieces fit together and become Nash IRL.

His voice is a melody I never imagined I’d hear. And I almost don’t understand why he’s introducing himself, but of course he has no clue who I am. Why would he? My current picture is an artsy photograph of the back of my head, my hair long and blowing in the wind. My face is always obscured in posts. It helps to mold my persona, a version of me that is cooler and more mysterious than I am in real life.

I’m Kels. That’s what I should say.

“Halle” is what comes out.

It’s the truth, but it feels like a lie.

“Cool.” He smiles, and my God, it’s so much better than the smiley-face emoji. “Are you just visiting?”

I shake my head no because words are stuck in my throat.

Oh, thank God. I don’t have to tell him. He knows.

“It’s not weird that I know that, I swear. I’m in his art history class. First class was supposed to be tonight, but he postponed it. Said his grandchildren were moving in. We don’t get too many new people in Middleton, so I kind of put two and two together.”

I exhale, not sure whether to feel relieved or disappointed.

Wait. Nash is in high school, I thought. We’re working on college applications—not in college classes. Next year it’s supposed to be us, meeting as freshmen at NYU, spending time in every bookstore downtown between classes and exploring the rest of the city on the weekends. If Nash takes classes with Gramps at UConn, if Nash is in college—well, that calls into question pretty much everything I know about him. Oh God, what if Nash is a catfishing liar?

He looks at me funny and I can already feel my neck flush pink.

“Oh. No, I’m not—MHS doesn’t have any art history classes, so your grandfather offered to let me into his. But yeah, high school. I am in it.”

Breathe. Nash is just perfectly nerdy and not a creep.

MHS. Middleton High School. As in my new high school.

“Cool. Where’d you move from?”

“New York. Upstate,” I lie without flinching, the words flying out of my mouth before I can even think them through. I have never been to upstate New York in my life. I don’t know why I say this. As far as Nash knows, Kels is moving from an army base in Georgia to North Carolina. Kels is comfortably in the South— hundreds of miles away from Nash.

“Well, welcome to Middleton,” he says. He looks down at his watch and frowns. “I have an ungodly stack of books to check out before the library closes, but I’ll see you around?”

He stands up as I nod, swoops his messenger bag over his shoulder, and is gone with a wave.

Oh my God. I knew Nash was from Connecticut but—I never thought to ask where.

I didn’t think it mattered, because it’s not like I planned on telling him that I—well, Kels—moved to Connecticut. Never did I ever think he’d be here, with me, in Middle-of-Freaking-Nowhere, Connecticut. Because who really lives here? No one I’ve ever talked to has even heard of this place.

If Nash knew Kels was in Connecticut, he’d want to meet. I wasn’t—I’m not—ready for that. We were supposed to meet in Washington Square Park, ready for orientation.

It was supposed to happen then, when I would be the closest version of Kels, for real, living the life Nash and Kels always talked about.

I glance at my phone-clock. Ollie texted me that dinner was almost ready fifteen minutes ago. I pack up my laptop and wipe the sweat beads off my forehead. Breathe in and out slowly to try to force my heart rate to recover.

Nash is here. In Middleton.

He has no clue who I am.

If I could never tell Nash who I really am online, where I’m the most confident, chill version of me, how can I ever form the words in person? 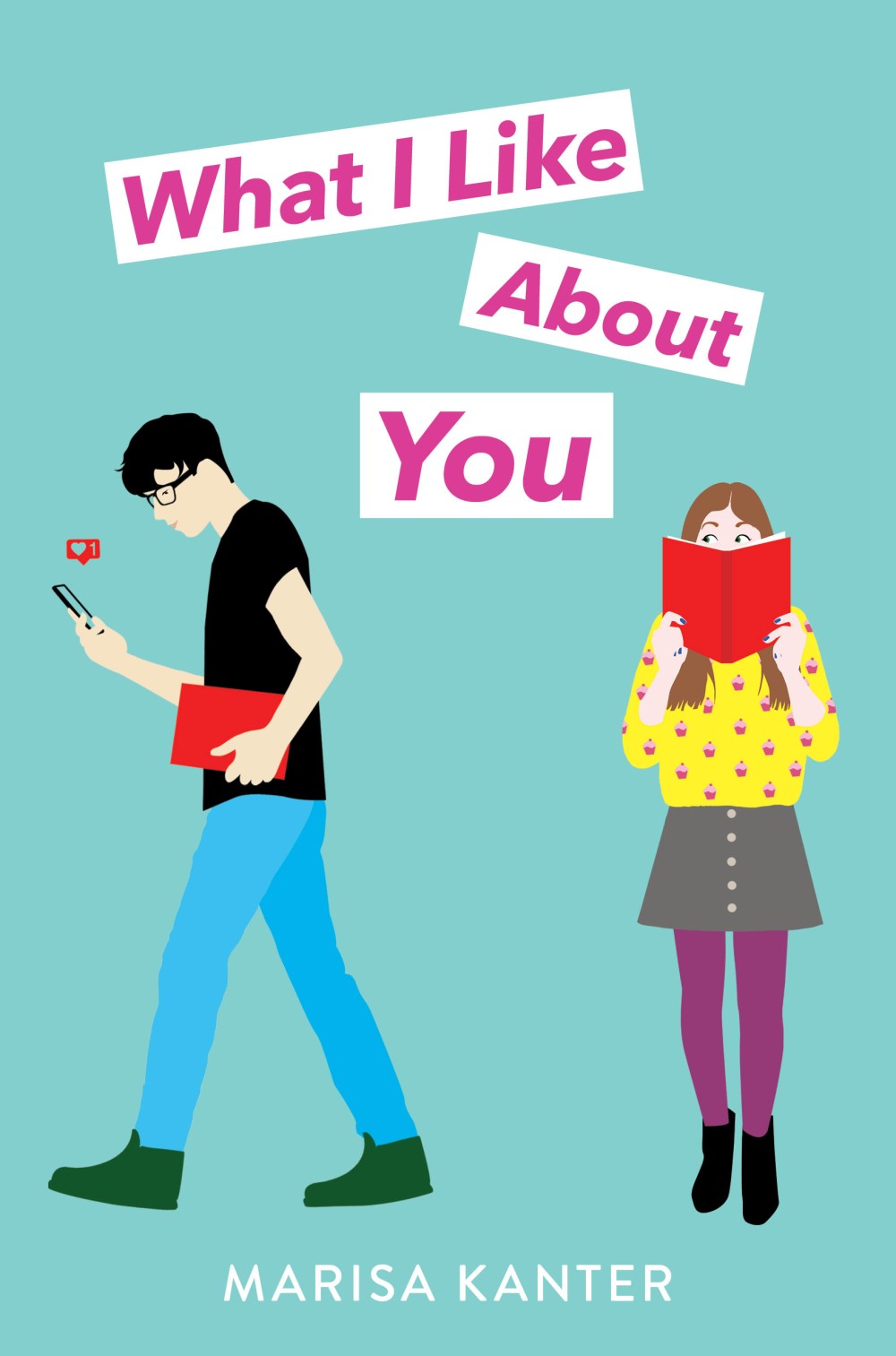 About ‘What I Like About You’ by Marisa Kanter

“Heartwarming, endearing, and sure to leave you swooning, What I Like About You shines with authentic characters you will absolutely fall in love with. This story is as sweet as the cupcakes you’ll be craving by the end!” —Rachael Lippincott, #1 New York Times bestselling author

Can a love triangle have only two people in it? Online, it can…but in the real world, its more complicated. In this debut novel that’s perfect for fans of Jenny Han and Morgan Matson, Marisa Kanter hilariously and poignantly explores what happens when internet friends turn into IRL crushes.

Is it still a love triangle if there are only two people in it?

There are a million things that Halle Levitt likes about her online best friend, Nash.

He’s an incredibly talented graphic novelist. He loves books almost as much as she does. And she never has to deal with the awkwardness of seeing him in real life. They can talk about anything…

Except who she really is.

Because online, Halle isn’t Halle—she’s Kels, the enigmatically cool creator of One True Pastry, a YA book blog that pairs epic custom cupcakes with covers and reviews. Kels has everything Halle doesn’t: friends, a growing platform, tons of confidence, and Nash.

That is, until Halle arrives to spend senior year in Gramps’s small town and finds herself face-to-face with real, human, not-behind-a-screen Nash. Nash, who is somehow everywhere she goes—in her classes, at the bakery, even at synagogue.

Nash who has no idea she’s actually Kels.

If Halle tells him who she is, it will ruin the non-awkward magic of their digital friendship. Not telling him though, means it can never be anything more. Because while she starts to fall for Nash as Halle…he’s in love with Kels.

What I Like About You by Marisa Kanter will be available on April 7, 2020. You can preorder your copy now from Amazon, Barnes & Noble, The Book Depository, or Indiebound. Also, don’t forget to add it to your Goodreads “to read” shelf!

‘Nancy Drew’ season 2, episode 8 review: Completely out of the blue

Lizzo is teaming with Amazon Studio to make a leap into the world of television— beginning with an unscripted series.

Those itching to experience the big screen adaptation of In the Heights can now look forward to watching the movie a bit earlier than expected.

Daniel Radcliffe to star opposite Bullock, Tatum in ‘Lost City of D’

Daniel Radcliffe will soon be sharing the big screen with Sandra Bullock and Channing Tatum.

‘Constantine’ reboot on HBO Max: Who should be cast as our young, diverse hero?

The Constantine reboot on HBO Max promises a young and diverse lead, but who could be cast to helm such an anticipated series?

‘Father of the Bride’ remake taps Andy Garcia to star

Warner Brothers’ Father of the Bride remake has found its star in Andy Garcia.