Westworld season 3, episode 1 brings itself back online in the real world and gives us a premiere that effectively acts as a soft reboot.

If this first episode of Westworld feels like a slightly different series to you, that’s by design.

“One of the things that was most exciting to us was, you learn the rules of these creatures and their world,” Jonathan Nolan said in a recent interview with Variety, “and then you spring them out of there.”

What happens now that the hosts have escaped from their jail is the theme of this third season.

Or, if we’re going to go with the vaguely religious themes of the season opener (and really the entire series), this season is about what happens now that the hosts have been able to escape from the hell created by their malevolent false gods — and find that they’ve been the real gods all along. 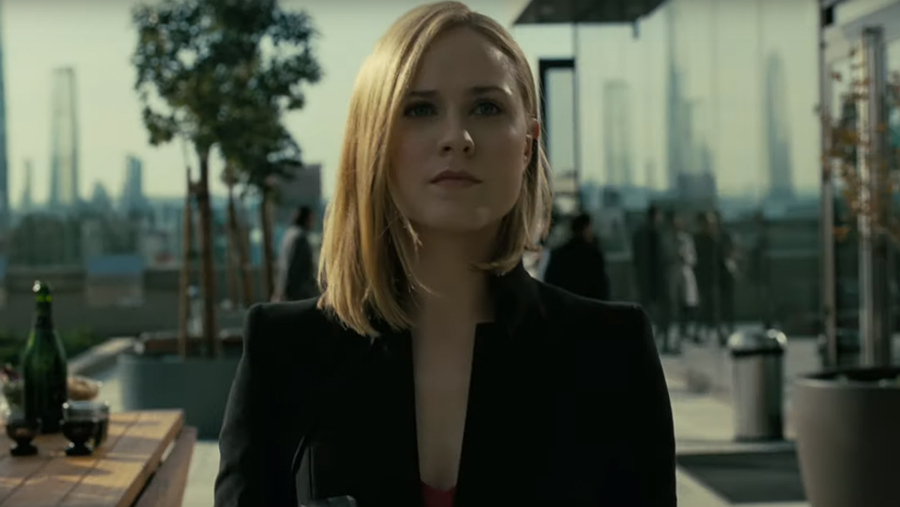 Dolores was one of the most fascinating characters in season 1 of Westworld, and her arc from naive rancher’s daughter to the self-proclaimed leader of the host resistance was one of the best parts of that fantastic season.

Her arc and character stagnated in the second season, in which she was no longer a host awakening to consciousness but an avenging revolutionary. Evan Rachel Wood remained as stunning of an actress as ever, but Dolores’ arc felt somewhat one-note as the season went on, losing much of the complexity from season 1 that made her so interesting.

However, as I mentioned in my season 3 review, she’s back to form here. She’s no less angry and avenging, but she’s added finesse to her repertoire in order to navigate in the real world — now a precision scapel rather than a blunt instrument.

The season opens with her taking money from Jerry, a serial abuser and incredibly wealthy man who once worked for Incite, which we learn later is the company that created Rehoboam — an incredibly powerful machine that collects data on everyone and everything and ‘charts a course for every single person’ in the pursuit of making the world a better place.

The opening scene is delightful for a variety of reasons — one of which is because it’s always good to see abusers get what they deserve — but also because it allows us both to immediately experience the real world and also because we see the newest evolution of Dolores.

Dolores in the real world is cool, collected and lethal; she’s at all times playing a game of chess and is 15 moves ahead of her opponent.

You were free. You had no god. But you tried to build one. Only that thing you built isn’t god. The real gods are coming — and they’re very angry.

For the first two seasons of the show, those that ran the park essentially functioned as gods, dictating the lives and deaths of the hosts as they saw fit.

But they were only ever false gods — mortals who gave themselves god-like powers while maintaining the borders of the park but who, at the end of it all, were unable to do anything to save themselves from being killed.

In short, the hosts have become the gods. The real gods, in the words of Dolores.

But perhaps not the only gods, as the introduction of Rehoboam seems to imply.

As a megacomputer that has so many thoughts they can no longer be tracked and one that seems to dictate life at large in the real world, I’m curious to see whether Rehoboam is a new kind of life in the way that the hosts are — and whether it will prove itself as an ally to Dolores or her true enemy this season. 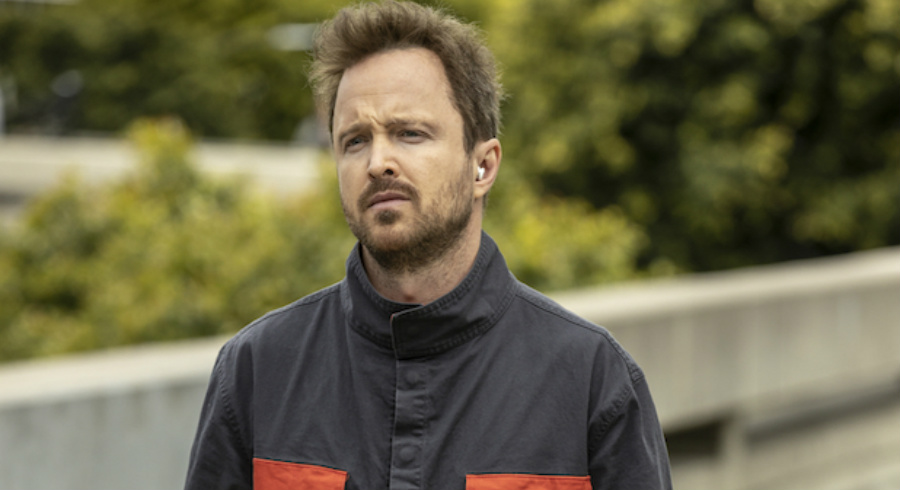 Aaron Paul’s Caleb allows us to experience the real (future) world through the eyes of someone who lives in it, just as the character of Dolores allowed us to experience Westworld in the show’s pilot episode.

Through him, we’re able to be introduced to the world in 2058, which is just as similarly fantastical and vaguely identifiable as the vistas and experience of Westworld.

Though it’s somewhat hard to believe (especially given the somewhat apocalyptic-seeming nature of our current reality) America and the world at large, for the most part, hasn’t descended into a dreary dystopia, but instead looks largely recognizable (give or take a few more robots).

However, the real world as we experience it through Caleb is also eerily similar to the constructed world of the park, and the season opener takes great pains to draw a lot of parallels with the pilot episode.

As Dr. Ford once said in Westworld’s fantastic first season: “Humans fancy that there’s something special about the way we perceive the world, and yet we live in loops as tight and as closed as the hosts do.”

Just as the pilot had us go through loop after loop with Dolores, so too does the Westworld season 3 premiere show us the way in which Cal is likewise trapped in a loop.

However, instead of Dolores’ smiling face waking to the splendor of Westworld loop after loop, instead we watch as Cal wakes to glaring sunlight on his face and a life that has him barely scraping by.

An Armed Forces vet relegated to construction work until he can ‘get his numbers up,’ we watch as Cal trudges through his life — working alongside his robot co-worker, visiting a mother who doesn’t remember him and committing petty crimes on the RICO app to get by.

You said they built the world to be a game. And then they rigged it to make sure they always won.

Most tragic of all (though we don’t know it at first), we listen to Cal confide in Francis — or perhaps I should say ‘Francis’ — day in and day out, discussing the ways in which he’s trying to make his life better, reflecting on the ways in which the world feels stacked against him.

As the episode goes on, it becomes increasingly clear that there’s something off about Cal’s conversations with Francis.

Slowly, we become aware that they aren’t quite the normal, catch-up conversations you have with an old friend, but feel akin to the conversations between a therapist and his patient.

Which is exactly what they are — or, at least, trying to be. Eventually, the conversations between Francis and Cal reveal another way in which this future world uses technology for — and against — humanity. Because Francis hasn’t ever been real this entire time, he’s simply a highly advanced bot used by the VA as a more frequent stand-in psychologist to help Cal.

But it’s artifice — one that not only reminds Cal of a friend who is no longer there, but also makes it harder for him to move on.

I’m perhaps the only person on Earth who hasn’t watched Breaking Bad (I know, I know), so I’m sure this comes as no surprise to anyone who has, but Aaron Paul is a fantastic addition to this cast. His performance especially in the scene where he unsubscribes from the service is heart-wrenching, powerful in both what it reveals about the world and what it shows about Cal.

The episode ends with him coming upon an injured Dolores in a darkened tunnel in the park.

Though Dolores has seemingly planned for every single thing that has happened to her in this episode, I get the impression that her running into Cal is the one thing she didn’t account for — and I’m so excited to see where the intersection of these two characters takes us throughout the season. 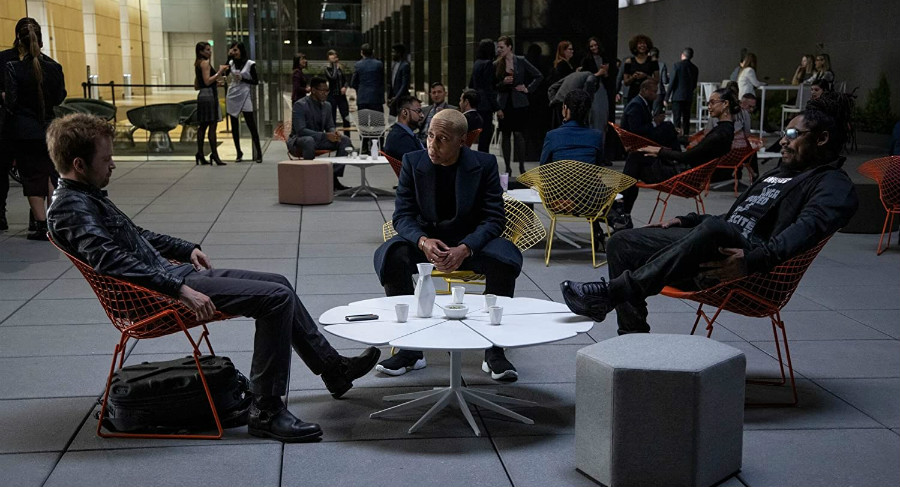 What did you think of ‘Westworld’ season 3, episode 1, ‘Parce Domine’?