Don’t expect a sophomore slump as Wayward Son hits the road with Simon, Baz, and Penny in the second installment of the Simon Snow series.

Simon Snow is on the couch. It’s where he is most days following the events of Rainbow Rowell’s Carry On, the first book in the Simon Snow series. Wayward Son picks up in the months after Simon lost his connection to magic, lost his title of the Chosen One, and lost his ability to appreciate anything more than midday cider and sweatpants.

The Simon Snow books are not a trilogy. In fact, when Rowell announced the title of the third book in the series along with a release date of “soon,” the author commented that she is not closing the door on Simon and Baz. “I just love writing them more than I’ve ever loved any other characters. So I don’t think I’ll ever say, ‘Oh, I’m done. I’m just never going to write Baz again.'” Rowell said in an interview with Vanity Fair. “But the plan is to write a trilogy, and then to write — I’ve already got another book idea that I want to do after that.”

And so, with three books planned for the Simon Snow series, the narrative in the second book could succumb to the dreaded sophomore slump. There are notable exceptions, but my impression of a second book in a trilogy are those which do more to service setting up a final installment than telling their own unique and compelling tale.

Mild spoilers for Wayward Son below. 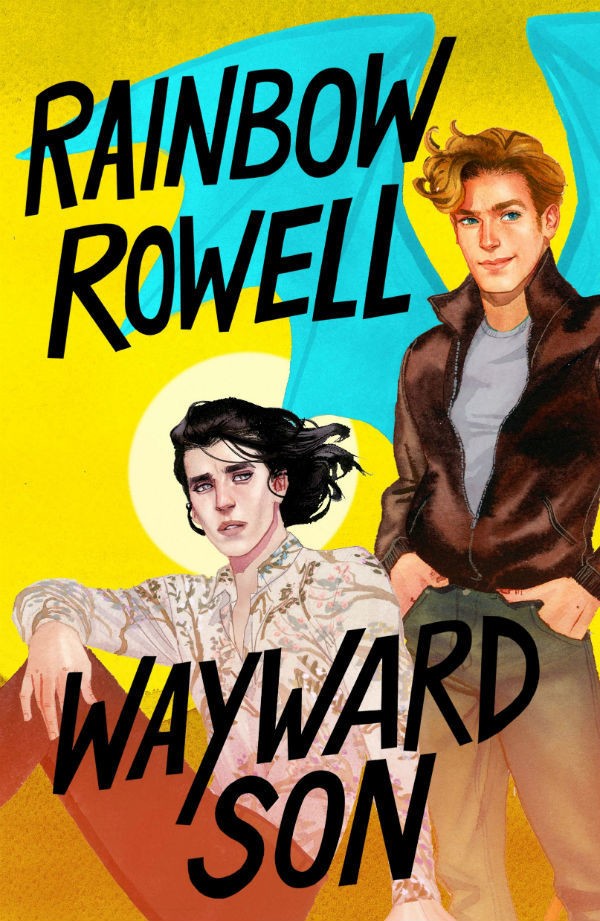 Stop One: ‘Carry On’ Capital

There is no happy ending in Carry On. There is, rather, a happy “pause.” A moment where exhaling in the arms of someone you’ve grown to love, surrounded by the people who support you, feels like the sweetest thing in the world.

But the dark shroud of reality is lurking just outside the door, waiting to get its claws in your back, seep into our hero’s mind with the relentless chant, “Who’s the Chosen One now? You’re not worthy of this love.” On repeat, seemingly forever.

Yikes. That’s not exactly where you want to see Simon Snow when you finally return to him four years after Carry On’s debut. But it is exactly where you find him. Starting the next chapter of his life with the company of Baz and his best friend Penelope does little to lift his mood from the events that led him to this point.

The Mage is dead, but Simon lost all of his magic, now has wings and a tail that must be concealed by his friends who still have their tether to the world that no longer feels accessible to him. He can’t pop into a store when he feels like it, but he can sit on the couch and ignore his studies and life.

His sullen mood does nothing for the company around him. Baz has seen the darkest and worst in people and when he tried to escape the life he felt relegated to it was Simon Snow who rescued him. Is it that obligation that is keeping Baz tied to Simon now? Or is it truly, undeniable love?

Same for Penelope. She conceals his wings, tries to provide a shoulder to lean on, all at the cost of expanding her world view outside the walls of the apartment. To help Simon she is hindering herself. So why doesn’t she take a break?

These are the pools of personal crises we find our trio in at the start of Wayward Son. There is little assurance given that any of them will emerge from the waters. These characters are drowning, and while occasional gasps of air keep them swimming, they need to fully break the surface.

This brings us to Agatha. The catalyst for getting Simon off the couch, for getting Penelope out of her own head, and for getting Baz where we never knew we needed him – behind the wheel of a convertible driving with his mother’s scarf tied around his head. A visual I will forever be grateful for.

The catalyst of the story is Agatha’s entanglement with a group of vampires who have broken off from society in an attempt to research how to obtain magic. Through her proxy, Ginger, Agatha finds herself thrown into their inner circle and ultimately trapped in a dead zone, unable to use the magic that she has been taking an extended vacation from.

Though not entirely certain that something is amiss, Penelope turns Agatha’s silence into a mission to 1) get Simon off the couch, 2) visit her boyfriend Micah, and 3) actually save Agatha when she does wind up to be in trouble.

There is enough mystery in the middle of the U.S. to keep the narrative moving – new mythos concerning dragons, new ways to conjure spells, new creatures and people who seek to know them. As much as you want to know about the dragons, there is nothing that can’t be left behind.

And Baz will be happy to leave it all behind – or will he?

Simon points out late in the novel that the discovery of one group of people might be enough to keep Baz at least considering the opportunity to stay in America, namely Vegas. Simon may have some work to do, Baz equally has to work through accepting that those around him do not see his need to feed as a disgusting habit that pushes him closer to an animal than a human.

While the sun, the wind, and the states Kansas and Illinois have all personally offended Baz during his stay, there is the appeal of learning about vampires who do not kill, who know how to keep their teeth in place, and can provide some mentorship that Baz does not have a whole lot of back home.

But his soft heart and foolish optimism (also things that he is personally not a fan of) keep him tied to the mission of putting his entire self out there for Simon Snow to take or leave.

There are several moment in Wayward Son where for split second the world seems to realign. As the chapters bounce between points of view of the characters, you see how the smallest action – a stolen glance, or brushing of fingers, stepping out of the shower – impacts or barely phases the others.

In the opening of the novel these moments are few and far between. But as our trio descends upon a Renaissance faire the world suddenly becomes a bit less oppressive and America becomes a little bit more tolerable. Simon doesn’t have to hide his wings, Baz witnesses Simon’s brief return to the master swordsman from the Carry On, and then, chaos.

A battle with rogue vampires inside fairgrounds on its surface does not scream refreshing. But it does more for Simon’s spirit than any snack from a gas station pit stop could. The adrenaline and the freedom that comes with acting not thinking pushes Simon back to Baz in an uninhibited way. A path that Baz has been waiting for Simon to venture down for a very long time.

It fades away, as all highs do, but the memory of that Simon still lurking inside of the boy who sits next to him, gives Baz hope.

Wrap it up, but pull the final thread

The story was never meant to end in America, a hero needs to go home. And home is at Watford. The pit stop took us through a network of hidden worlds that exist right beneath the surface of what people–err, Normals– are willing to pay mind to.

But back on their home turf is where this story needs to end.

Luckily, Rainbow Rowell did just that.

In the same Vanity Fair interview Rowell said, “I don’t think that you get much closure from Wayward Son.” You don’t say Rainbow…At least she goes on to add, “I am planning for Any Way the Wind Blows to give people closure on some big questions.”

This may not be the end of Penelope, Baz, Agatha, or Simon, but it does present the opportunity for answers and closure. It remains to be seen if the epilogue that opens Wayward Son will come to fruition.

Until then, you will not want to sit on the incredible fan art that has come out of this book. Th The beautiful rendering of Simon and Baz for the covers of Carry On and Wayward Son by Kevin Wada is only the tip of the iceberg. I cannot recommend following the tags on Tumblr or Instagram. You will not be disappointed.

Wayward Son by Rainbow Rowell is on sale now. Order it from Amazon, Barnes & Noble, IndieBound, and Book Depository, or add it to your Goodreads list!