We use cookies to ensure that we give you the best experience on Hypable. If you continue to visit us, we will assume that you are happy with it.
3:45 pm EDT, November 2, 2019

The sins of the varsity squad Titans have hung over this entire season, haunting the older members of the team and directly impacting the younger members.

That tension and history finally comes to a head in this week’s episode, and what Dick Grayson feared would happen…actually happens. I know, I’m shocked, too. Turns out that Dick told the rest of the Titans that Jericho was already dead when he met up with the Deathstroke all those years ago, and the knowledge that he’d lied and kept the secret to himself is enough to make his former teammates up and abandon him.

I’m of the opinion — and I think the episode itself supports this — that the varsity squad Titans are really just externalizing their own guilt and shame at what they did to Jericho and placing all the blame on Dick. I understand his former teammates and friends being angry that he kept this a secret, but their reaction seems overblown.

He didn’t plunge that sword into Jericho’s chest, and while I — as his friend and teammate — would be angry he’d lied, I’d also be more hurt that he felt he couldn’t be honest. All of the varsity squad are adults who have shown themselves capable of understanding nuance and complexity, so either there’s some darker force at play here (which could be, given that Trigon exists) or they’re externalizing their own guilt.

Whatever the case, all the Titans — varsity and JV squad — leave. Hank and Dawn return to Wyoming, only to realize that the same problems which have plagued them since we met them haven’t gone away. Rachel, in what was initially the most puzzling move of the episode, goes with Donna — but then lays into her pretty severely before escaping to go out on her own.

Jason and Rose leave together, because why not, I guess, and Kory — who I think was going to stay with Dick initially — is called away to deal with real adult problems that are more important than the angst the Titans continuously put themselves through.

That leaves Gar to hold down the home fort with Conner, and Dick to go off on his own searching for atonement. Neither of these things end up well, because of course they wouldn’t. That’s what happens when you leave a child at home to take care of a walking nuclear bomb so you can look for forgiveness when you’re a dramatic hero with a self-destructive streak a mile wide.

I know I spent a lot of time in my last review essentially gushing over Deathstroke, but in case I wasn’t clear, I want to say I think it’s clear Dick Grayson wasn’t at fault in Jericho’s death.

However, the fact that he bears the weight of responsibility for it and is haunted by it is why he’s a good man and a hero worth cheering for. He recognizes that he had a part to play in Jericho’s death even if it wasn’t his sword in the fledgling hero’s chest, and that his ruthlessness and manipulation made it possible for that confrontation to occur in the first place.

So, even though I think the last episode made a good case for sympathizing with Deathstroke, it’s still clear that Dick Grayson is the hero in this equation.

Still, him seeking atonement and redemption by finding Jericho’s mother and asking for forgiveness is a bit misplaced, and I was glad when the show didn’t have her forgive him. It’s not hers to forgive, after all, really, and Dick being forced to carry that burden will — hopefully — make him a better, more thoughtful hero in the long run.

However, what I want to talk about here is the non-violent confrontation between Slade and Dick. I’ve watched that scene in the living room between the two of them half a dozen times, and I’m of the opinion that Jericho is inhabiting Slade’s body. There’s a moment about halfway through their conversation — after Dick says that Jericho was too good for the both of them — where you see Slade begin to act strangely and Adeline try to rush Dick out of the house.

My theory — and the prevailing one on Twitter as well — is that the editing of Jericho’s death in the last episode is deliberate, and what we don’t see is Jericho leaving his body to inhabit his father’s. Jericho still being alive, in a way, through Slade, is the only reason it makes sense for Adeline to even let Slade back into her house.

I think those brief few moments where Slade seems to be struggling to speak is him and Jericho fighting for control.

My hope is that Dick figured this out somehow, and that his final moments in this episode where he lets himself get arrested are part of some sort of wider master plan to free Jericho from his father’s body.

Of course, that could just be my own optimism at play here. What’s more likely is that Dick Grayson is truly Bruce Wayne’s son and that he not only inherited the man’s flair for the dramatic, but his self-destructive streak. We’ll have to wait and see how it all shakes out.

While Dick is off getting himself arrested, Kory is dealing with a few problems that encompass an entire planet.

Even though it meant that we would be getting even fewer Dick and Kory crumbs than we’ve already gotten so far, I was happy to see Faddei return. First of all, he’s a handsome dude who’s charming and has great chemistry with Kory. I’m always here for that. Secondly, I like when Kory gets her own storylines divorced from all the baggage and angst of the Titans because she deserves it and I also deserve a break from the angst.

And because I like Faddei so much, I was very sad to see him get bodysnatched by Blackfire. It’s clear he really cared about Kory and they had a long history together. I wish he could’ve stuck around so we could watch him help Kory retake Tamaran. I also wanna say that upon rewatch, I absolutely loved seeing the exact moment Starfire realized it and just watching her rip on her sister in Faddei’s body.

With the threat of Deathstroke on hiatus — for now, at least — Titans has started to build out the storyline between Blackfire and Starfire, and here is where I’ll say go ahead and skip over the rest of this section if you’ve been enjoying this season of Titans so far because I’m about to launch into a pretty big criticism of season two.

Seeing the arc that they’re laying ahead of Starfire is exciting to me, but it’s also incredibly frustrating as well. Season 1 of Titans focused on building the core team of Dick, Kory, Gar and Raven, and I was really excited to see the show build that dynamic out and show the four as a team.

However, what we’ve gotten instead is almost a whole new show that focuses more on the original team from five years ago, rather than the team that the first season gave to us. Obviously I love Deathstroke and what he brings, but rather than splitting Kory off to do her own thing for most of the season, they could’ve instead narrowed the focus of this season to the core four from last year and made Kory and her history with Blackfire the central conflict of the season.

Doing so would still allow the show to introduce Conner, but it would also give the show more time to focus on plot points that have been thrown crumbs this season — the fallout of whatever happened between Trigon and Rachel, the JV Titans coming together as a team, Dick and Kory’s development, Gar as a character.

I love this show, as much as I criticize it, and I like the varsity squad Titans, but why spend an entire season developing the core four characters and their dynamic just to essentially ignore them in the second season? This storyline between Starfire and Blackfire is immediately engaging, and the more we learn, the more I’m convinced there’s enough there that it could’ve been the season’s central focus. 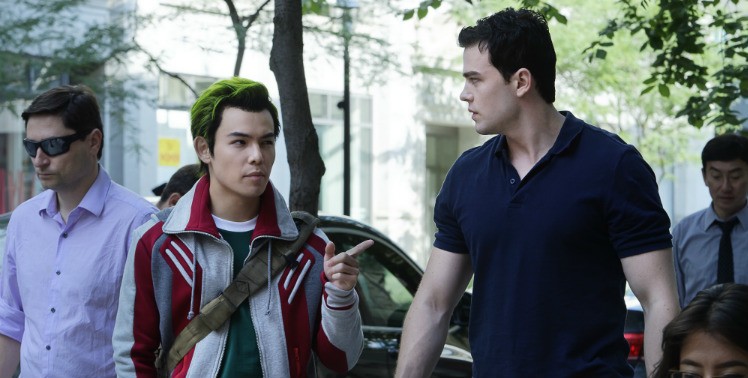 But back to the storyline that Titans season 2 is giving us, rather than the one I wish I had gotten.

After weeks — and really, a season and a half — of saying that Gar needed more screentime and deserved more of a robust storyline, I finally got my wish!

Gar is the purest, kindest character on this show, and I’m glad Ryan Potter has finally gotten an episode to shine. His scenes with Conner were some of my favorite this week, and I loved the genuine enthusiasm Gar has for being a hero and his utter belief in and faith in the Titans and Dick as the team leader.

Him and Conner together were like two puppy dogs, excited to be out and about together in the a new world. However, the thing with puppies is that you can’t really leave them alone. Not because they’re malicious, but because they lack the ability to control themselves. Conner is kind and sweet and enthusiastic, but he is too powerful and too lacking in maturity to navigate this world without proper supervision.

Gar’s excitement at having another hero around — especially one as powerful as Conner — quickly turns to dread, panic and fear when he realizes not only how powerful Conner truly is, but that he can’t control himself or be controlled.

The final shot of him, alone, crying in the Titans tower and trying to reach out to Dick broke my heart, and I really want to give credit here to Ryan Potter for being able to play Gar as both an excited teen who found a new friend and a lost and scared kid who just needs help but can’t find it.

I hope it’s not the last we see of him and Conner interacting, but I also hope some adult comes around soon to help my poor, sweet, sad green son.

What did you think of ‘Titans’ season 2, episode 9, ‘Atonement’?

by John Hansen
by Jay Snow