Amazon’s The Pale Horse follows Mark Easterbrook as he discovers he may be the next victim in a string of murders. Read our review.

Amazon and BBC One have once again teamed up to bring another Agatha Christie novel to life. In early 2019, it was The ABC Murders, and this year, it’s The Pale Horse.

Then, one day, a woman by the name of Jessie Davis (Madeleine Bowyer) dies, leaving behind a mysterious list of names inside one of her shoes. Inspector Lejeune (Sean Pertwee) begins an investigation, and soon it is discovered that most of the people on the list have died.

Mark does the absolute bare minimum to help Lejeune, even going so far as to hide his affair with a woman who was on the list. Instead, he embarks on his own investigation, and soon discovers that this conspiracy may go as far back as his first wife.

I described The ABC Murders as a satisfying, albeit empty, murder-mystery, and the same can be applied to The Pale Horse, which should come as no surprise, as Sarah Phelps wrote both of them.

While everything involved in the production — the setting, the cinematography, the clothing, the acting — is top-notch, something seems to be missing from the story. You spend most of the mini-series patiently waiting for Mark to unravel the mystery, only for him to discover there’s more string than he ever could’ve imagined. 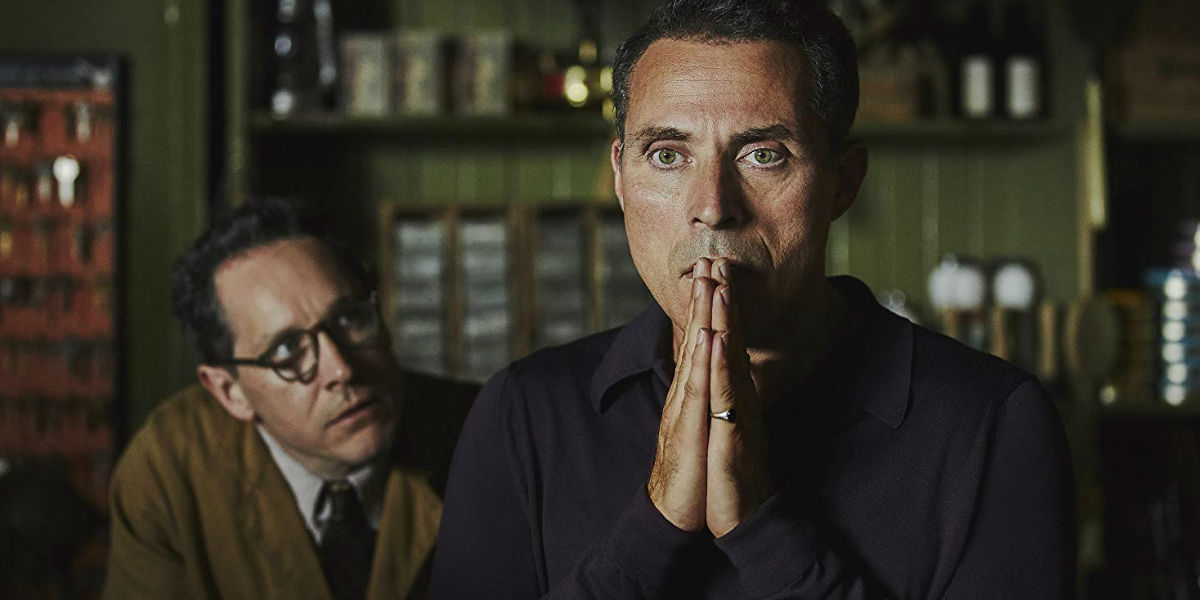 Of course, this is typically how mystery novels operate: You discover a body, you learn of a crime, you spend 90% of the book/movie/show trying to figure out what happened, and then everything is revealed in the final few scenes.

This formula works for some, though I’ve always struggled with it. Still, I can appreciate a good detective story, and while The Pale Horse will most likely keep your attention, the ending may not answer all of your questions.

But I’ll discuss that in depth later, under a spoiler heading.

For now, rest assured that Sewell and Scodelario carry this mini-series on their very capable shoulders. With only two one-hour episodes, The Pale Horse is, essentially, a movie. Anything longer than that would’ve invited more confusion via additional plot points, though the idea of fleshing out a few of those unanswered question is a welcome thought.

The Pale Horse is a slow decent into madness for our two main characters. At the start of the series, both Mark and Hermia do an excellent job of putting their best face forward. Neither one of them talks about their marital problems, and they certainly don’t let anyone else in on the idea that their life may not be perfect.

Once the investigation into the list is launched, however, we see the facade unravel. They are no longer dancing around the subject between the two of them, and neither of them are doing a good job of holding it together with other people. 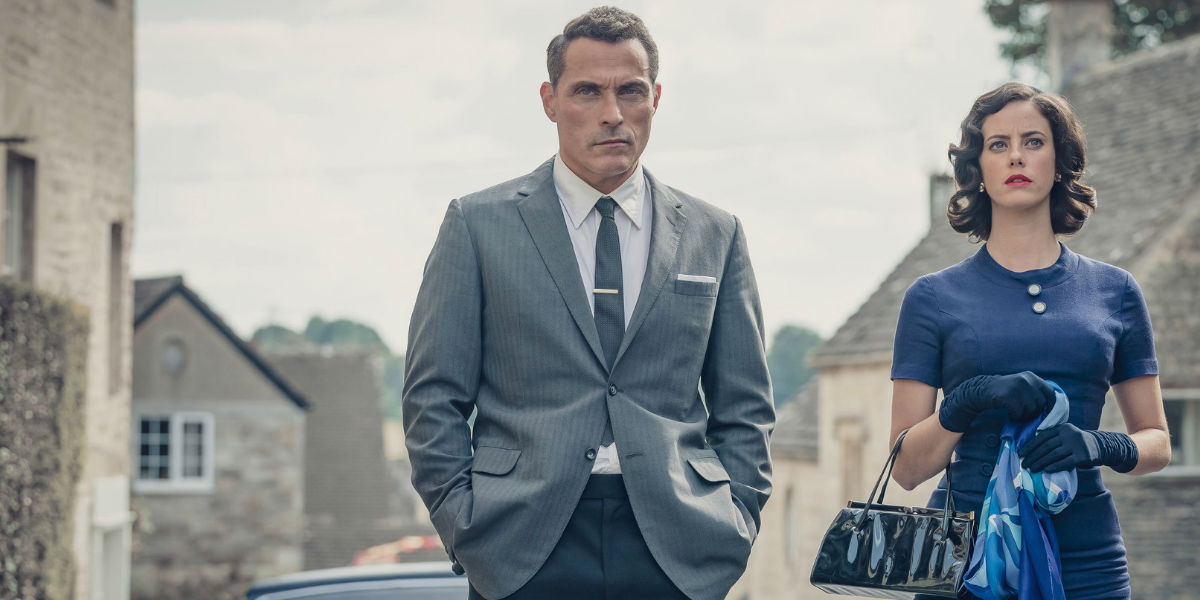 Scodelario especially did a fantastic job looking perfect on the outside just long enough to convince her friends she was fine, only to break down in private and reveal just how unstable she truly is.

Despite her being a large part of Mark’s life, however, Hermia is still only a supporting character. Her husband takes center stage, and the series is careful not to paint him as a hero or a villain.

I’ll admit that I haven’t read the original novel by Agatha Christie, but a quick skim through the synopsis tells me that quite a few changes were made in the adaptation.

I won’t argue the merit of whether this was necessary, but I will say that I found it interesting to follow Mark’s path, never quite knowing whether you should root for him or not. Every time you become sympathetic to him for the loss of his wife, you’re reminded of just how cold and calculating he can be.

Even the difference in Mark’s relationships with the women in his life between the book and the adaptation seem pointed, aimed at making Mark less of a hero and more of case study. You’re certainly not meant to like him, perhaps the intention is to hate him by the end, but most of all, it seems as though our purpose as a viewer is simply to observe.

Unfortunately for The Pale Horse, the target audience seems fairly narrow; those who don’t care for crime dramas and those who are massive fans of Agatha Christie’s novel would be better-suited to skip this one, while casual fans of the genre may not mind spending a couple hours watching this mini-series.

Spoilers ahead for The Pale Horse.

This series kept my attention long enough to get to the ending, but once all began to be revealed, that’s truly where the confusion settled in. 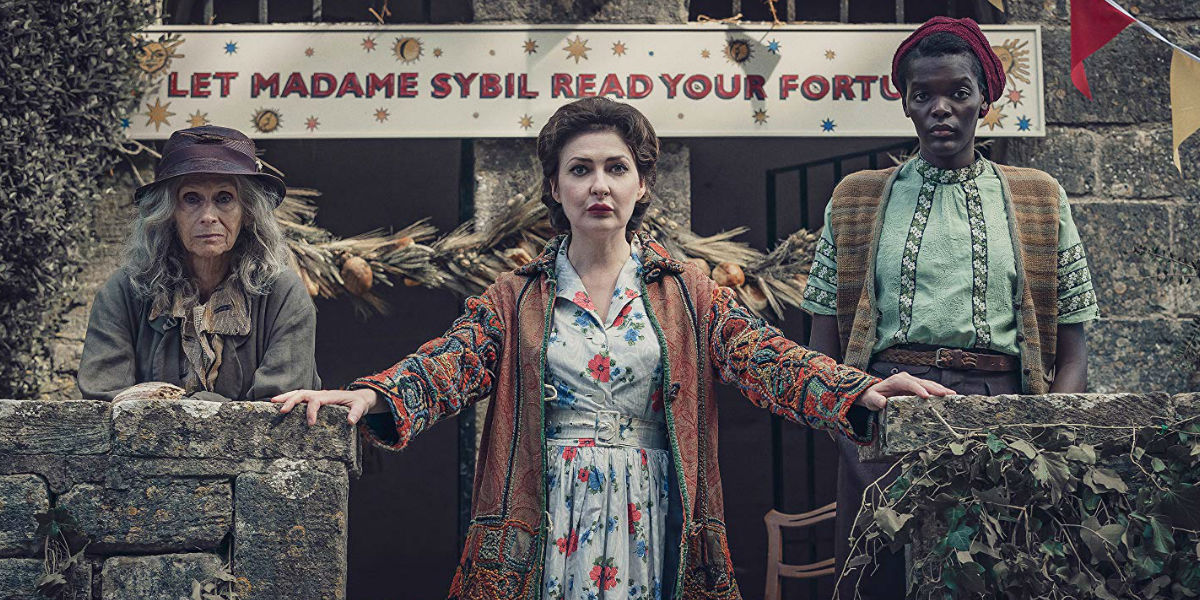 Throughout both episodes, we’re led to believe that the three mysterious women (Kathy Kiera Clarke as Sybil Stamfordis, Sheila Atim as Thyrza Grey, and Rita Tushingham as Bella Webb) connected to those who died are, in fact, witches.

Despite Mark’s disbelief, the surmounting evidence leads us to at least consider this could be a possibility. Though we later learn how Osborne chose and killed his victims, the three women appear to have some ability to see the future.

The final scene between Hermia and the witches is also interesting. She poses a single question about what will happen to Mark, and we see that he winds up back at the scene of his wife’s death. You have to wonder — is he dreaming or is he dead? Has he been poisoned, cursed, or sentenced to hell?

The series forces you to draw your own conclusion, and while I see the merit in doing so, it also feels like a misstep. When you’re reading or watching a murder mystery, you have one objective — whodunnit. There are other questions involved, such as how and why, but the point of those final few scenes is to definitively answer these inquiries.

The Pale Horse, instead, leaves one major aspect open to interpretation. Though this has a time and a place in other genres, I don’t believe it is at home here in an Agatha Christie adaptation.

‘Agatha Christie’s The Pale Horse’ is now streaming on Amazon