We use cookies to ensure that we give you the best experience on Hypable. If you continue to visit us, we will assume that you are happy with it.
5:45 pm EDT, June 19, 2019

With the announcement of a Hunger Games prequel coming in 2020, we’re taking a look at which familiar faces could feature, as well as the novel’s potential to expand the world of Panem further.

We’ve written extensively about the Hunger Games here at Hypable, exploring everything from how we’re more like the Capitol than we care to admit, to how it changed the world.

The story has always been ripe for expansion, and Lionsgate appeared primed to do so once the movies ended, with their own series of prequels planned. However, with the current political climate, and the very real parallels between our society and Panem, Suzanne Collins has opted to explore the events that led up to the Hunger Games trilogy herself, though she had previously stated that she was done with the world of Panem.

The timeframe that Collins is looking to explore is referred to as the “Dark Days” of Panem, set after the failed rebellion and destruction of District 13. The Treaty of Treason was put into effect, and the Hunger Games began. Those fledgling days of the Districts giving up their children to fight to the death in the name of “keeping the peace” likely went about as well as you might expect.

With that very specific scene set 64 years before Katniss and the second rebellion, we’re exploring which familiar faces we should expect to see, and what implications the story might have for revisiting the original trilogy. 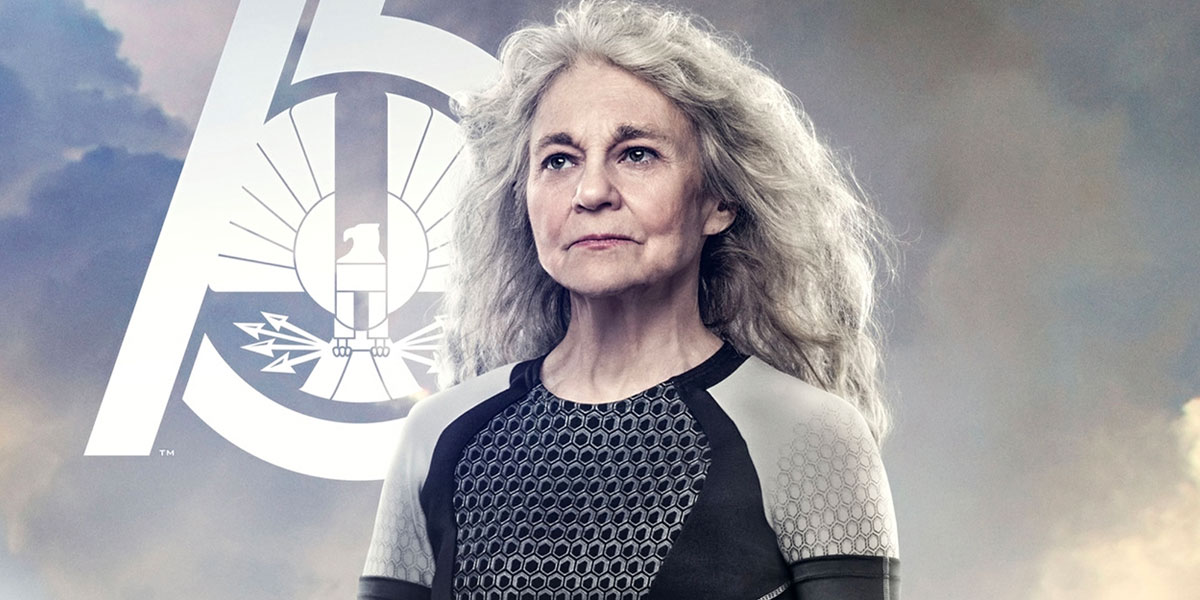 Perhaps the biggest known character to have an involvement in this story is Mags Flanagan. Mags was a pivotal piece of the original Hunger Games, though perhaps didn’t have as much narrative focus fleshing out her character as some might have hoped for. As the woman who all but raised Finnick Odair, and sacrificed herself so that the second rebellion might live on, she was a huge catalyst for pushing that story forward.

But Mags has always represented more than just that spark.

When the first rebellion flamed out, Mags was just five years old. Though young, she existed in a time before the Hunger Games came into being, and afterwards. Growing up in conjunction with the Games, with at least some awareness of what came before, would hugely shape the person that Mags was and is. But beyond that, there are so many questions still surrounding Mags, and her time in the Games.

Not least that Mags is from District Four, well-known in the novels for having Career Tributes. When that tradition started is less clear, just as we don’t know whether Mags herself was a Career, but knowing that District Four eventually sides with the second rebellion, it would make a certain kind of sense to weave that into her story. And, equally, would bookend her choosing to volunteer to save the life of Annie Cresta much, much later in the timeline.

The Panem prequel is, reportedly, set to take place around the 10th Hunger Games, one year before Mags becomes the respective Victor of her own, but that sets up the possibility of expanding the story out further, introducing the sentiment of the children caught in the in-between, the ones who saw life before, and life after, and how they might have to fight to win their world back for any future generations. There’s something genuinely compelling about the specific story that could center around Mags, and her involvement in the Dark Days.

One that would prove an interesting parallel to the only other character that we know was around during those very early days of the games. On the flip side of Mags’ story of rebellion and potential defiance is the one that features Coriolanus Snow, future tyrannical President of Panem, and the orchestrator of many of the horrors that Katniss and the second rebellion face.

Snow was born a year before the introduction of the Hunger Games, in the Capitol, meaning his trajectory was vastly different to that of Mags, and most of the other children caught up in the first years of the Games. He was never involved directly in the Games, and it could be an interesting angle to explore, that his life — as a child of the wealthy elite — never changed. He had no fear for his life or world, unlike the other children of Panem, and so his younger years and upbringing would look vastly different.

Running those two worlds parallel, ones of extreme change, fear, and fighting for survival, alongside the comfortable, carefree lives of the Capitol would act as a hyper-realized version of our current climate, but exploring those extremes in fiction has always led to more open and honest discussion. Particularly amongst those who will, eventually, be able to take that power back.

Using both Mags and Snow to re-introduce the audience to the story, as familiar and important players in the future of Panem, would serve to set up that world and give a strong foundation to build upon. But also, give a little more richness to — in Mags’ case particularly — someone we never quite learned enough about.

What are you hoping for from the Hunger Games prequel?