We use cookies to ensure that we give you the best experience on Hypable. If you continue to visit us, we will assume that you are happy with it.
10:49 pm EDT, September 26, 2019

The Good Place season 4 premiere, “A Girl from Arizona, Part One” is here at last, and while this might be the final act for Eleanor, Michael, and the gang, we’re gonna hold off the sads until the last possible moment. So without further ado…

What happened in ‘The Good Place’ season 4 premiere?

As the epic experiment gets fully underway, Eleanor struggles to keep a straight face while showing an elated Chidi the neighborhood. Michael gives the remaining Soul Squad a pep talk, while Sean praises the demons for their excellently awful achievements.

Eleanor introduces the next test subjects, Linda and Brent, to the neighborhood. Linda’s main trait seems to be that she is incredibly boring, while Brent is a scuzzy Good Old Boy. Eleanor unloads both on Janet.

The Soul Squad meets their new accountant at Mindy St. Claire’s house; the clock has begun, and they have one year to improve the humans and save humanity. Eleanor is not concerned about Simone, so they optimistically turn to the three unknown quantities. However, Simone quickly reasserts herself as a problem when she interrupts the welcome video and informs Eleanor that the Good Place is merely a construct of her dying mind — making her impossible to improve.

Jason suggests that they introduce Simone to Chidi. Eleanor resists until Simone turns up at the Welcome Party wearing two foam fingers and knocking over a tower of cupcakes (saddest moment of the episode) and then party guests. Michael reminds Eleanor of Chidi’s sacrifice and she agrees to match him with Simone. Unfortunately, Simone realizes that she knew Chidi in life, explains away his presence in her “brain jail,” and scares him off.

Meanwhile, Derrick wanders away from Mindy’s, sucking up to Janet and frustrating Jason. Jason tries to call a truce, but Derrick vows that Janet will be his. Jason kills Derrick with the reset plunger, and he turns up in the sky video. Janet becomes increasingly stressed and tells Jason that they will discuss their relationship later.

Eleanor and Michael try to tackle Linda on Flying Day, but she turns into the Karate Kid when they try and push her to… you know, DO something. It turns out that Linda is actually Shirtless Hot Demon Chris in disguise. The Judge is furious and installs Chidi as they fourth subject, delighting Michael.

Bad Janet shows up on the train to get Chris, taking the opportunity to thoroughly neg Eleanor. The train pulls away as Michael animates his message to Sean… but this is definitely To Be Continued.

The Good Place season 4 premiere, “A Girl from Arizona, Part One”, establishes one truth very quickly: Your confidence is seriously overblown.

The cards may be on the table for everyone (or at least, everyone who’s kept their memories) in both the Good Place and the Bad Place. The playing field might seem finally even, the only challenge the four sunny faces who will determine the fate of humanity. But even as Eleanor plows through Chidi’s orientation (and the knife-twisting moment where he forgets her name!) The Good Place season 4 premiere makes it clear that there are unpleasant surprises and foundational cracks entirely apart from the work of the great Experiment.

Sean’s attempt to sneak a demon into the scheme is the most obvious example of assumptions gone wrong, but there are plenty of other unsettling forces moving beneath the skin of the Soul Squad. Jason is, for once, unsettled and nervous as Derrick (rather frighteningly) threatens the un-relationship with Janet that he has likely taken for granted. Janet herself is uncharacteristically burdened by her responsibilities — holding this whole shebang together is evidently more of a challenge than she expected, a potential knot in the story to keep an eye on. 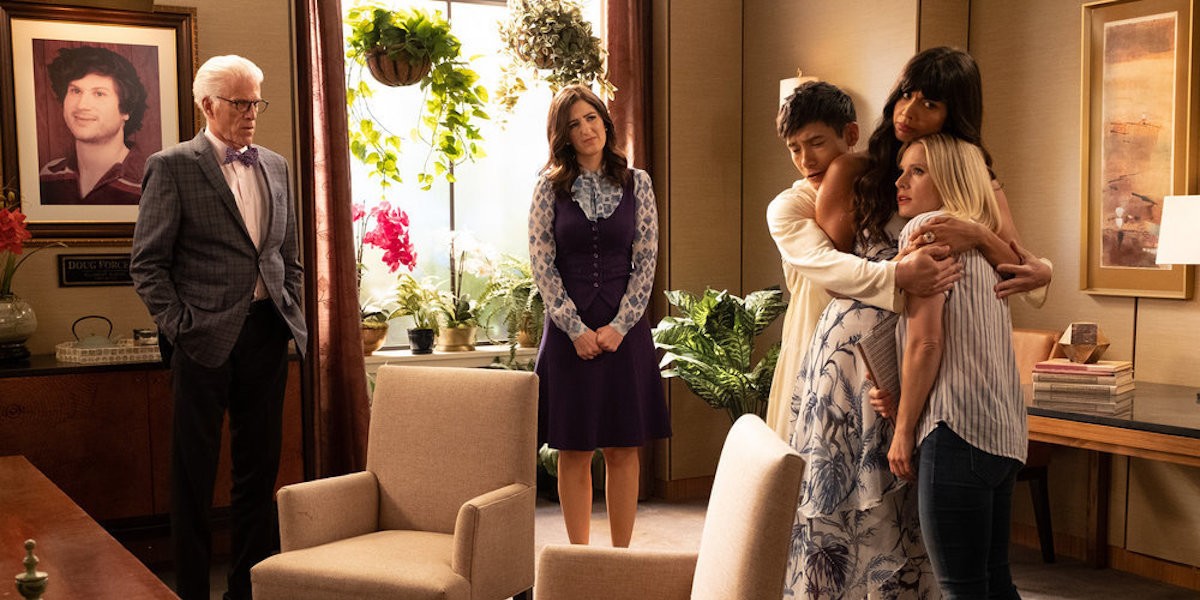 At the same time, Simone’s attempts to actively break the world she finds herself stuck in reveal the cracks in Eleanor’s confidence. Michael’s moving speech about Chidi’s sacrifice is well taken, but the fact remains that this is an awful lot to ask of Eleanor in the long term.

With Chidi now a subject in the experiment, the pressure of their interactions will only increase, and I have to wonder if the Judge is aware of the potential consequences of her edict. Eleanor has grown admirably flexible in her actions even as her morals have firmed up over the course of The Good Place, but that doesn’t mean she won’t eventually snap.

All of this, played through The Good Place‘s deceptively delicate hilarity, makes Michael’s unflagging optimism seem slightly frayed around the edges. It’s nice to see his confidence in the Soul Squad, but unless the group’s the underlying issues are addressed (an ongoing theme of the series) it seems like disaster might be nearer to hand then success.

Related: 34 The Good Place quotes to soothe your soul here in the Bad Place

Ironically, the only person who actually seems content in The Good Place season 4 premiere is Chidi, he of the eternal choice. But his short stint in paradise is probably over now that he is a piece in this game. Welcome back to your internal divisions, Professor Anagonye; at least you’re definitely not alone.

Michael: Tahani! So smart and sophisticated. She was the only one who was able to talk me out of that goatee.
Tahani: Well, I lost that battle with Robert Downey Jr., and I’ll be damned if I lose it with you.

Eleanor: Technically, the pride of Phoenix is a life-size statue of Alice Cooper made of cigarette butts. It’s outside City Hall. But thank you for the kind words.

Derrick: Janet is, and always will be, MY mommy-girlfriend.

Mindy St. Claire: You know, it’s bad enough that you guys have taken over my house for a year and I’ve had to move into the attic, but now I have to walk in to find Darth Vader’s turd in the middle of my living room!

The Judge: Sean, I don’t have time for this. I just started Deadwood, finally, and I need my daily dose of Timothy Olyphant. So I’m gonna make this short. If you so much as breathe on this experiment again, I will restart the entire thing from scratch — and then, I will personally rip off your eyelids and make you watch heartwarming videos of soldiers coming home to their dogs.

Eleanor: Did you put those trash cans there, just so you could crash into them?
Bad Janet: Wasn’t my fault, I was texting.

What did you think of ‘The Good Place’ season 4 premiere?