We use cookies to ensure that we give you the best experience on Hypable. If you continue to visit us, we will assume that you are happy with it.
2:00 pm EST, November 12, 2019

You guys aren’t even ready for these new Dragon Prince season 3 images.

Wonderstorm and Netflix’s dense mythological adventure, The Dragon Prince, returns for its third season on Nov. 22. Lucky fans at New York Comic Con were able to screen the premiere episode, “Sol Regem,” and learned a few very tantalizing tidbits about the upcoming story.

Now, a whole smorgasbord of beautiful new images from The Dragon Prince season 3 have been released — and while the trailer certainly has more information, some of these shots are Very Interesting Indeed. 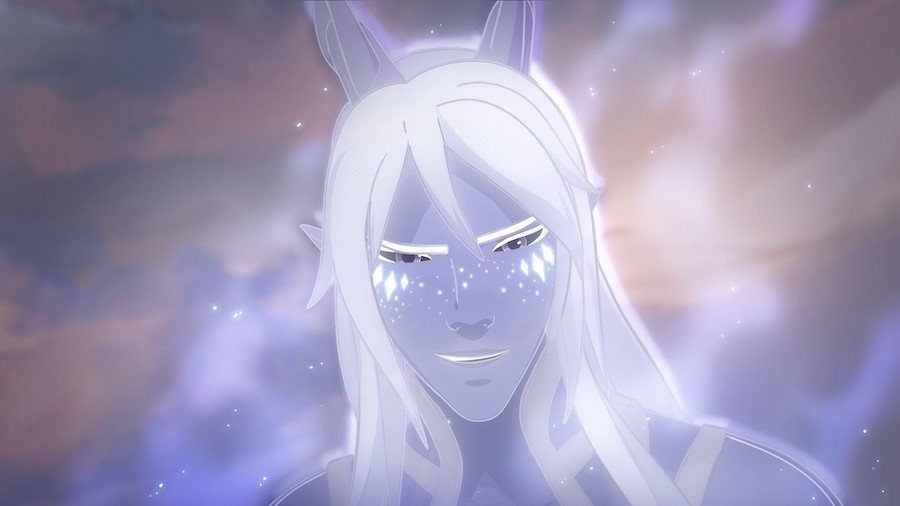 The first of The Dragon Prince season 3 images features everybody’s favorite super-mysterious Star-Touch Elf, world-dominating power magician, and dream boyfriend, Aaravos. There isn’t too much new information here, but it’s possible that Sir Sparkle may be able to shed his buggy carapace in Viren’s ear, and return in the disturbingly beautiful flesh. 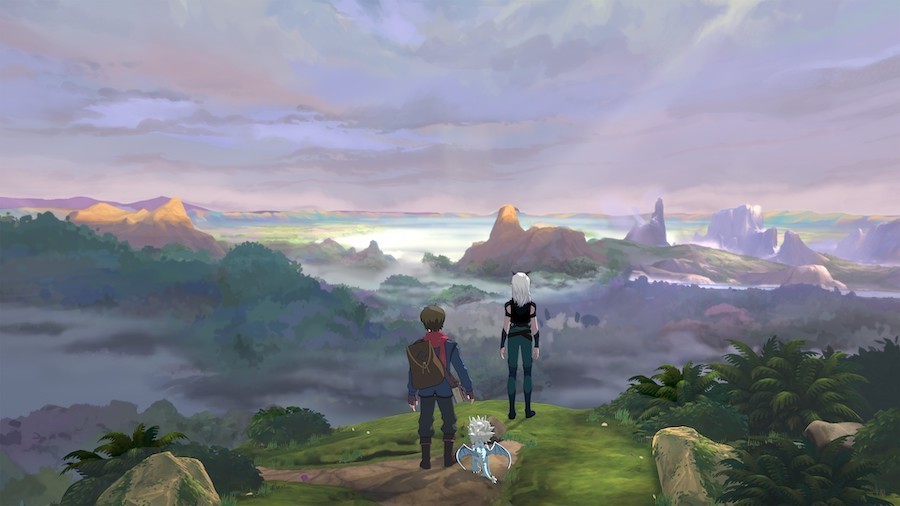 Next, Callum, Rayla, and Zym look out on a gorgeous vista of the magical land of Xadia. Thank goodness there definitely won’t be anything terrifying or dangerous out there! Smooth sailing ahead for Team Return Babby Dragon, and you can bet on that! 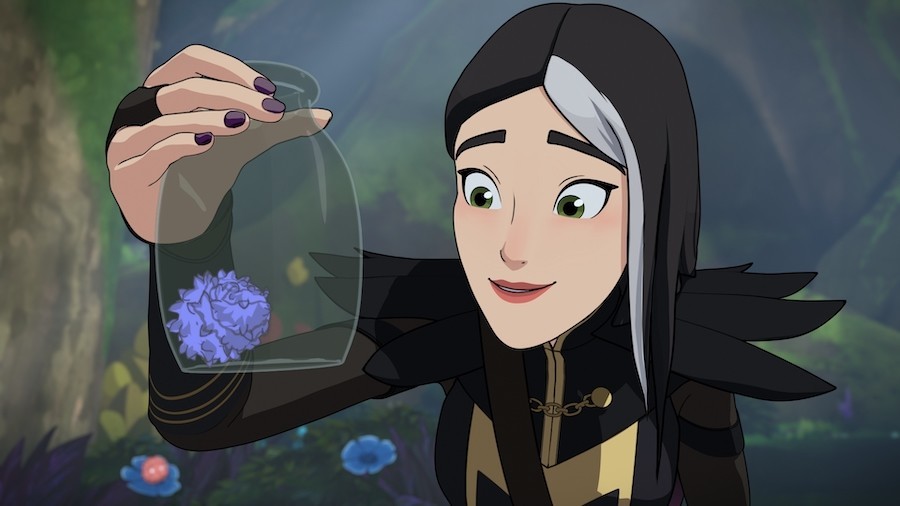 A wild Claudia appears! Last seen in season 2 using a tremendous Dark Magic spell to heal her brother Soren, Claudia is clearly still interested in her brand of magic in The Dragon Prince season 3.

Related: Everything we know about The Dragon Prince season 3 (and beyond!)

Tellingly, the silver streak in her hair has grown much more prominent, matching her father Viren’s snowy locks; let’s hope the similarities end there.

(They definitely won’t end there, will they?) 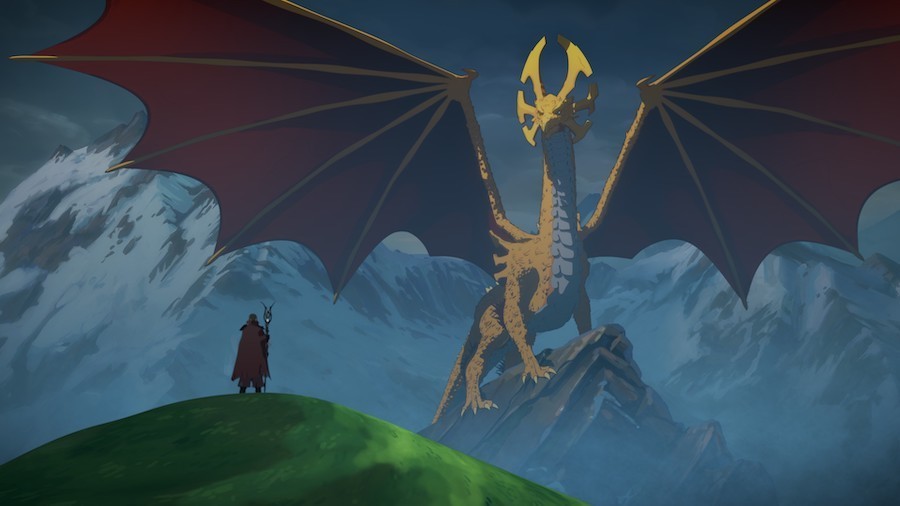 Here we have a confrontation between the Arch Dragon of the Sun, Sol Regem, and what we believe is humanity’s first Dark Mage. Sol Regem is looking a lot more spry than he is in the current-day story, so clearly the dragon has some unpleasant adventures in his future. 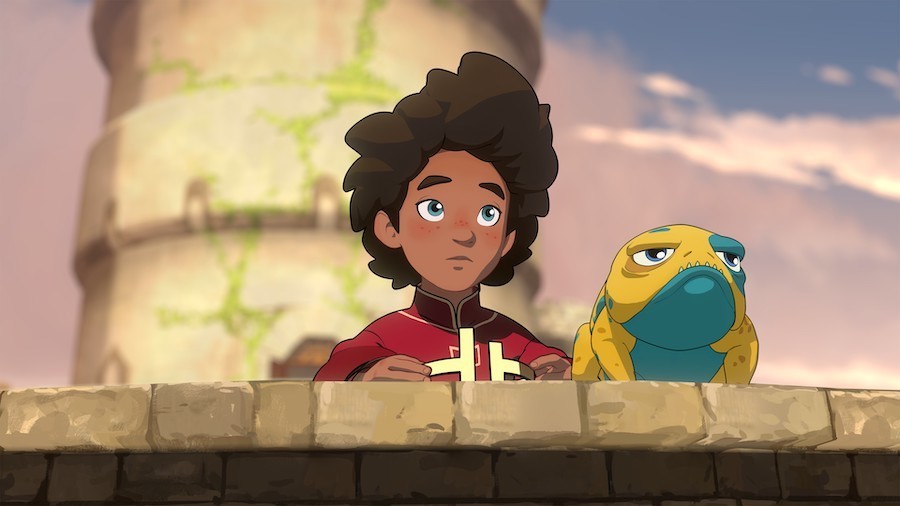 In this The Dragon Prince season 3 image, Ezran, who has returned to Katolis to take his place as king, contemplates his crown. It’s hard not to want to reach through the screen and give the kid a hug, but at least he has Bait to keep him company. 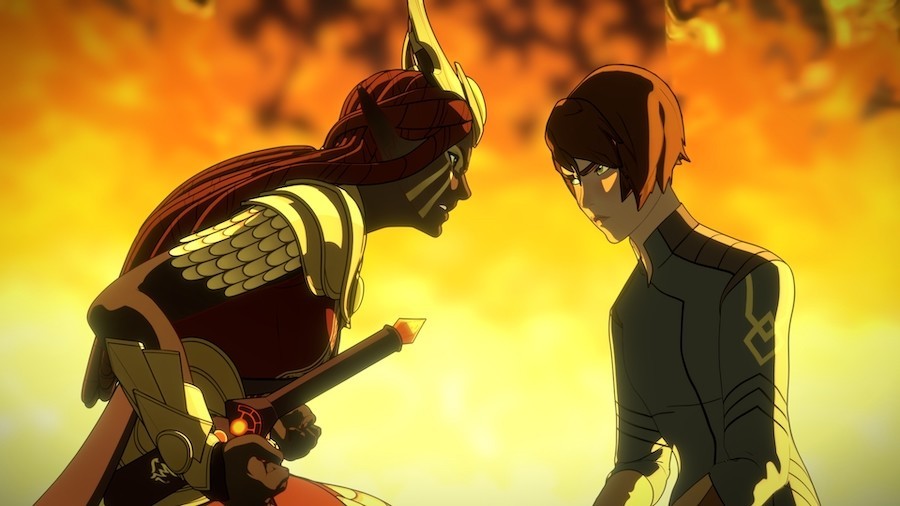 Ship Alert! General Amaya and the Sunfire Elf Janai face off again in the lava-filled Breach between Xadia and Katolis… except this time, Amaya is uncharacteristically unarmored. If the two are fighting, it’s not with weapons now — could there be hope for communication (and maybe more, okay I’ll stop now) between the two warrior women of opposing loyalties? 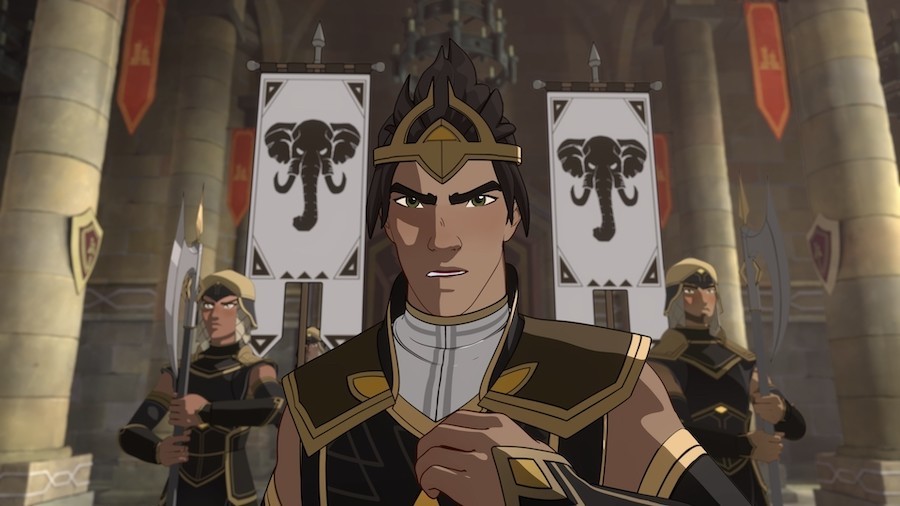 Hey, it’s a new guy! This The Dragon Prince season 3 image offers our first real look at Prince Kasef of Neolandia. Love the elephants, not so keen on the combative look on his face. Though perhaps, since Viren’s last act as a free man was to send shadow assassins against the other leaders of the human kingdoms, Kasef’s ire might be justified in this case. 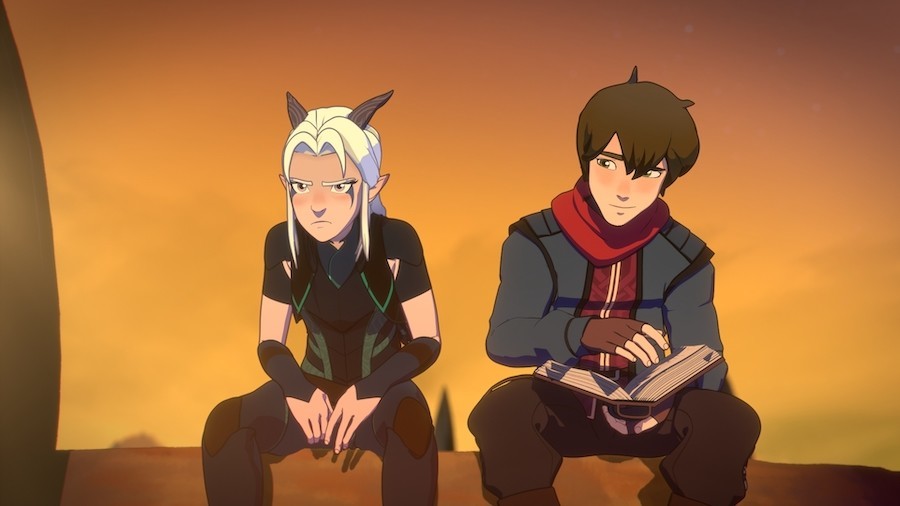 It’s time for another Ship Alert! Rayla and Callum share a moment in The Dragon Prince season 3. Maybe not a happy moment — Rayla looks pretty pissed, and Callum rather abashed — but hey, we’ll take what we can get. 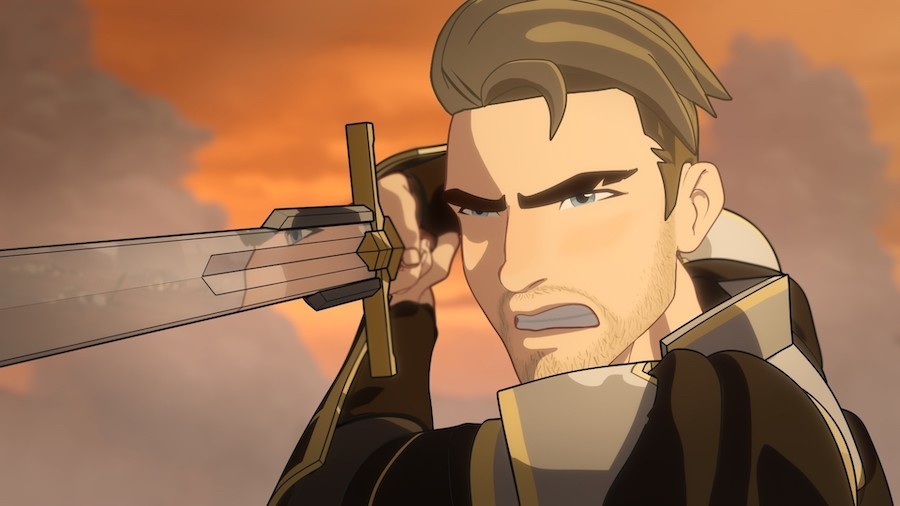 Ooooh brother. This The Dragon Prince season 3 image of Soren is guaranteed to thrill anyone invested in Soren and Claudia’s storyline.

Related: The Dragon Prince season 2 ending is way more important than it seems

The lovable (if sometimes violent) doofus Soren is looking distinctly ruffled in the image, with a beard growing in and a rather desperate determination in his eyes. We don’t know who Soren is threatening with that sword, but it’s clearly serious business.

Also, zoom in to see the reflection of his eye in the blade. Honestly, this show gives me chills sometimes. 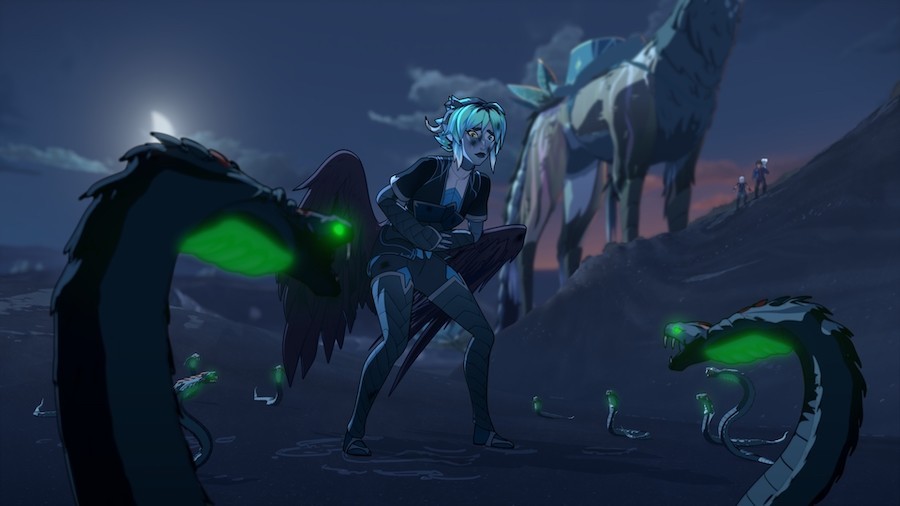 After Soren, we have another new character, designated as a Skywing Elf. Rayla, Callum, and Zym stand in the far background, watching as the luminescent elf is surrounded by scary glowing snakes. (What did I tell you? Xadia is FINE.) Could this be a new member of Team Return Babby Dragon, or is it a pit-stop on the way to completing their peaceful mission of getting Zym back to his mom? 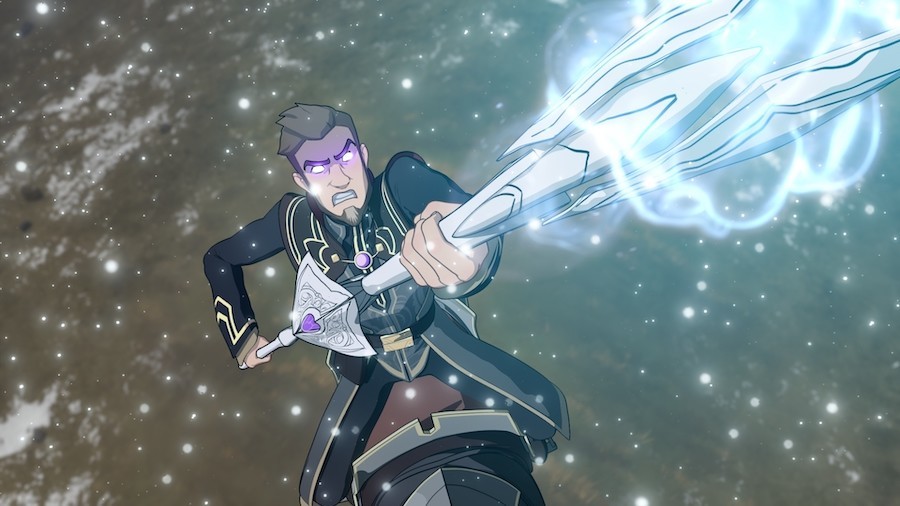 Uh-oh, Dad’s gone evil again. It’s possible that this The Dragon Prince season 3 image may be part of a flashback, as Lord Viren doesn’t look quite as magically messed-up as he does in the present day. But he’s definitely engaging in Dark Magic, and it’s looking more and more like The Dragon Prince doesn’t want us to separate the events of the past from the drama of the current action. 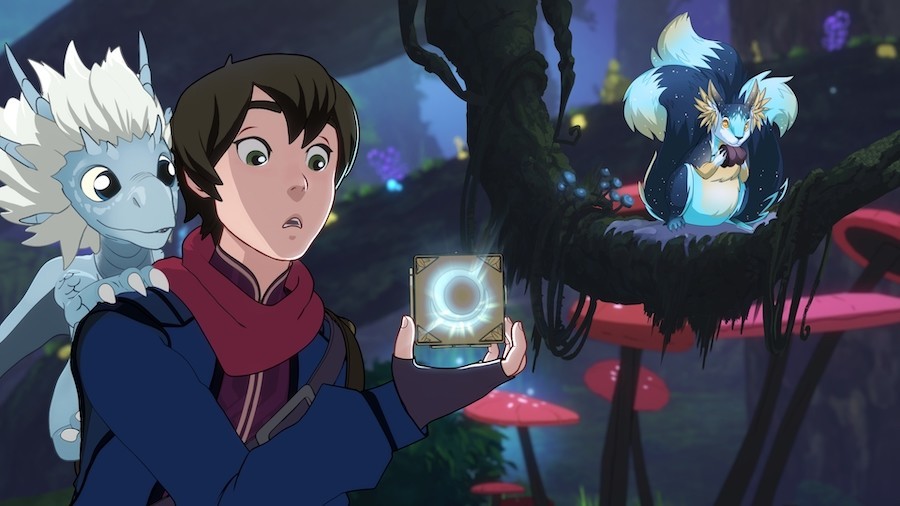 The last of The Dragon Prince season 3 images shows off more of the magic of Xadia. Look, it’s a glowing squirrel with three tails! Oh, and also the moon symbol on Callum’s Key of Aaravos has lit up. Zym seems pleased, at least… but is that really a good thing?

Luckily, we don’t have too long to wait to find out.

The new season opens as Callum and Rayla finally enter the magical land of Xadia, and begin the last and most dangerous leg of their journey to reunite Zym with his mother, The Dragon Queen. Meanwhile, Ezran returns to the kingdom of Katolis to take his place on the throne, only to be immediately pressured to go to war with Xadia. Lord Viren, who is imprisoned and desperate, begins to realize the power of his new ally — the mysterious Startouch elf, Aaravos.

Related: The Dragon Prince creators tease the past and future in their best season yet

In season 3, the series will reach its most epic heights yet. We will discover the wonders of Xadia, encounter heroes, old and new, and learn some previously untold history about how Zym ended up on this epic journey. Season 3 will introduce new iconic characters — good, evil, and of course layered and complicated. Long-held beliefs will be challenged, new magic will lead to incredible powers, and a momentous battle will be waged in the name of finally stopping a centuries-old conflict that has affected generations.

The Dragon Prince season 3 soars onto Netflix on Nov. 22.

Do you have theories based on ‘The Dragon Prince’ season 3 images?
Share this article: