We use cookies to ensure that we give you the best experience on Hypable. If you continue to visit us, we will assume that you are happy with it.
3:33 pm EST, December 22, 2020

Team StarKid’s ‘A VHS Christmas Carol’ and Tin Can Bros’ ‘Wayward Guide’ are a pair of holiday treats!

‘Tis the season for fans of Team StarKid, as both StarKid and the Tin Can Bros have recently released new content for us to enjoy!

A Christmas Carol is well-trod ground for adaptations on stage and screen, both musical and not – with A Muppets Christmas Carol obviously the best of the lot. So it seemed curious that Team StarKid, who has skewered more contemporary bits of pop culture in their shows like A Very Potter Musical and Twisted, would be gifting us with a brand-new musical adaptation of A Christmas Carol.

The show is billed as “A VHS Christmas Carol,” which turned out to mean that every single musical number is a spoof of classic 1980s songs, from workout songs to power ballads. This, then, was the hook: a spoof of the 1980s visual and audio aesthetic, built on the scaffolding of the classic story!

It works like gangbusters. ‘80s music lends itself well to intense feelings, so that provides a convenient shortcut for the emotional journey we’re supposed to accompany Scrooge on. It also helps that we are so familiar with the story, the show can just zip along. Unlike some of the works StarKid is known for, A VHS Christmas Carol embraces brevity: it zips from song to song without pause, merely some quick (musical!) narration, and clocks in well under one hour.

The show is written by Clark Baxtresser, who also serves as the narrator. Baxtresser is known for composing music for StarKid (and StarKid-adjacent) projects, but this is his first solo writing effort with the troupe, and it’s a very promising start. The music in this show is by far the catchiest Team StarKid has produced in many years; the cast recording is already available on iTunes and StarKid’s official store. Lauren Lopez recently said (while promoting another project) that for weeks, these songs have been the first thing running through her head when she wakes up – pretty soon we’ll all be unable to get them out of our heads. 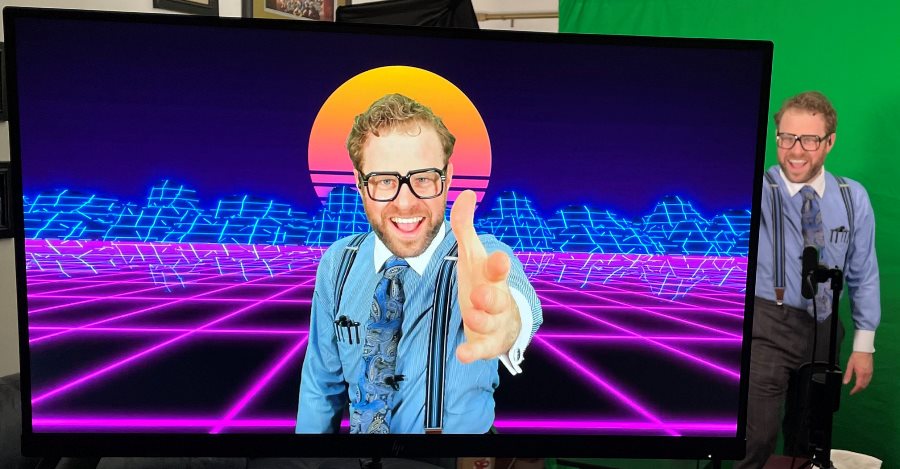 The cast features almost all the Team StarKid mainstays in roles of varying size, led by an incredibly charismatic Dylan Saunders as Scrooge. It’s clear just how much fun they are all having putting this together! And as a special treat to long-time StarKid fans, Britney Coleman and AJ Holmes make their triumphant returns to StarKid productions since the Very Potter trilogy! Coleman is belting her face off as Scrooge’s old flame Belle, while Holmes hams it up as Scrooge’s old boss and several other small roles, and it’s clear their respective successes on Broadway have honed their musical theatre chops in the years since we’ve seen them.

The format of paying homage to ‘80s videos allows A VHS Christmas Carol to make the most of the limitations created by the pandemic: trippy backgrounds, multiple giant heads singing on the screen, and dramatic crossfades provide welcome amusement, and a respite from the Zoom boxes that have been seared into our eyeballs.

December 12th and 13th saw live-ish performances (Team StarKid is as beset by technical difficulties and shoddy internet connections as the rest of us!), while the recorded version will be available to watch for the remainder of the month (and, if there’s any justice in the world, every holiday season for the rest of time!). Tickets can be bought on Team StarKid’s website for $12, and in this writer’s opinion, only a true Scrooge would balk at spending that for such a charming show.

Meanwhile, this past week saw the conclusion on YouTube of Wayward Guide for the Untrained Eye – a webseries by the Tin Can Bros (Joey Richter, Brian Rosenthal, and Corey Lubowich). If watching A VHS Christmas Carol reignites affections and nostalgia for Team StarKid, many members of the troupe can currently be seen in the webseries, alongside other regular TCB stars such as Mary Kate Wiles, Ashley Clements, and Gabe Greenspan. Even some old-time StarKids make an appearance: Carlos Valdes as the town drunk, and Darren Criss as Ryan Reynolds (no, not that one!). It’s a cast to die for!

Wayward Guide is a silly story about a small town besieged by werewolves, told through the lens of a brother-and-sister podcasting duo, and featuring a smattering of corporate intrigue as well. There are ten episodes of the series (usually about ten to fifteen minutes in length), all available on YouTube. Wayward Guide also serves as an interesting experiment in multimedia storytelling, since there is an accompanying podcast (the in-universe one being produced by the protagonists) that fans can listen to.

Wayward Guide is inspired by the game Ultimate Werewolf, which accounts for the somewhat odd pacing: it’s evocative of the game’s format, where everyone in town wakes up each day to find a werewolf attack had taken place, and debates what to do about it. Unfortunately, the pacing makes it hard to care about the characters, leaving the show to serve as surface-level humor without much emotional investment.

It’s at its best when it just deals with the crazy characters of the town, all werewolf drama aside, and just lets the highly talented cast chew some scenery. In those moments, it’s highly reminiscent of the (cruelly) short-lived sitcom Trial & Error, just with lots more werewolves!

Tin Can Bros have proven themselves very adept at crafting entertainment for the stage: both Spies Are Forever and Solve-It Squad were incredible shows. Their screen output has been far less engaging, and Wayward Guide is a firm step in the right direction: it’s absolutely worth a watch for the silliness on screen, and may become a perennial Halloween favorite. All ten of the episodes can be found at the Tin Can Bros’ YouTube channel.