We use cookies to ensure that we give you the best experience on Hypable. If you continue to visit us, we will assume that you are happy with it.
12:30 pm EDT, October 7, 2020

And so they’re back, one last time, for real this time. Hypable previewed Supernatural season 15, episode 14 “Last Holiday”, so if you’re keen to learn what the post-lockdown premiere looks like, read on.

The last time I wrote a spoiler preview for Supernatural (the mid-season finale!) I asked for time to please slow down to at least half-speed, to hit pause on the impending ending. And well… What can I say? Whoops.

When COVID-19 caused production to cease, the Supernatural cast were just two episodes shy of completing their epic saga. Rather than air all the filmed episodes as scheduled, The CW decided to yank the show off the air in March, holding back the completed episodes until after the show was able to film the elusive final two. After safety measures were drawn up and a strict quarantine was undertaken, the cast was able to return to set in late August to finish what they started, and on Friday September 11, the series wrapped for good.

So this has officially been the longest, most drawn out season of Supernatural ever, with Thursday’s return episode “Last Holiday” falling just two days shy of a whole year since the season 15 premiere. Can’t say this situation is exactly what I intended when I made that wish! But we’ve sure had a lot of time to reflect on the show and savor the goodbyes.

The CW will air the final 7 episodes during the show’s old timeslot – 8pm Thursdays – as a sort of season 15 2.0 situation. This was a smart move, because I get the feeling that if the show had been left hanging on episode 17 or 18 – at what is sure to be the crisis point of the core drama that will allow the story to be resolved once and for all – with only two episodes to come back to – the wait would have been agonizing and the payoff would be somewhat brief. This way, we get to immerse ourselves back into the rhythm of the Supernatural we know and love and gain back that momentum before the Really Big Stuff kicks off. 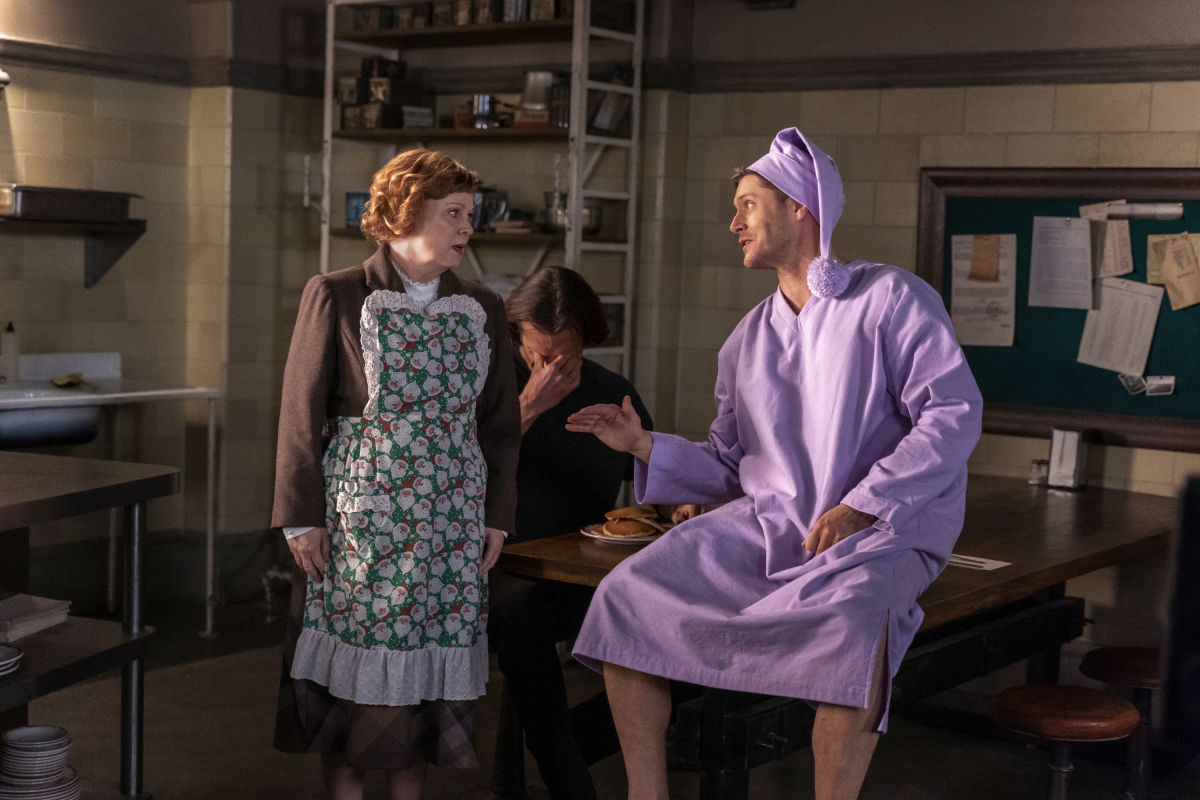 Although it wasn’t designed to be a hiatus-breaker, “Last Holiday” is actually an excellent episode to return on, for a number of reasons. Here’s what’s in store.

Spoiler Warning: This article contains generalized spoilers for Supernatural season 15 episode 14, “Last Holiday.” If you do not wish to be spoiled at all, do not read this article in advance of the airdate.

MAKING UP FOR LOST TIME – Sam (Jared Padalecki) and Dean (Jensen Ackles) discover a wood nymph (guest star Meagen Fey) living in the bunker who is determined to protect her family, at any cost. Eduardo Sanchez directed the episode written by Jeremy Adams (#1514). Original airdate 10/8/2020.

If you want to know what to expect from Supernatural’s fall 2020 return, here’s 10 teasers plus 15 single word clues from our advance viewing of Supernatural season 15, episode 14 “Last Holiday.”

by Kristen Kranz
by Karen Rought