We use cookies to ensure that we give you the best experience on Hypable. If you continue to visit us, we will assume that you are happy with it.
6:21 pm EDT, March 23, 2020

Supergirl season 5, episode 16 — on the heels of the news Alex received about Jeremiah on the previous episode — has Alex falling to a new low, desperate for a chance to escape reality and avoid her emotions.

On Supergirl season 5, episode 16, Alex Danvers finally becomes Supergirl, though not in a way anyone has anticipated since the beginning of the series. It’s an interesting route to achieve this long-awaited moment, and I have to say, I did enjoy it. Alex Danvers is one mighty hero, with or without her powers.

Meanwhile, Kelly is desperate to try to help Alex deal with her emotional turmoil, but has bigger issues to face when Alex is stuck in the virtual world because of a glitch that Obsidian North just won’t seem to fix. 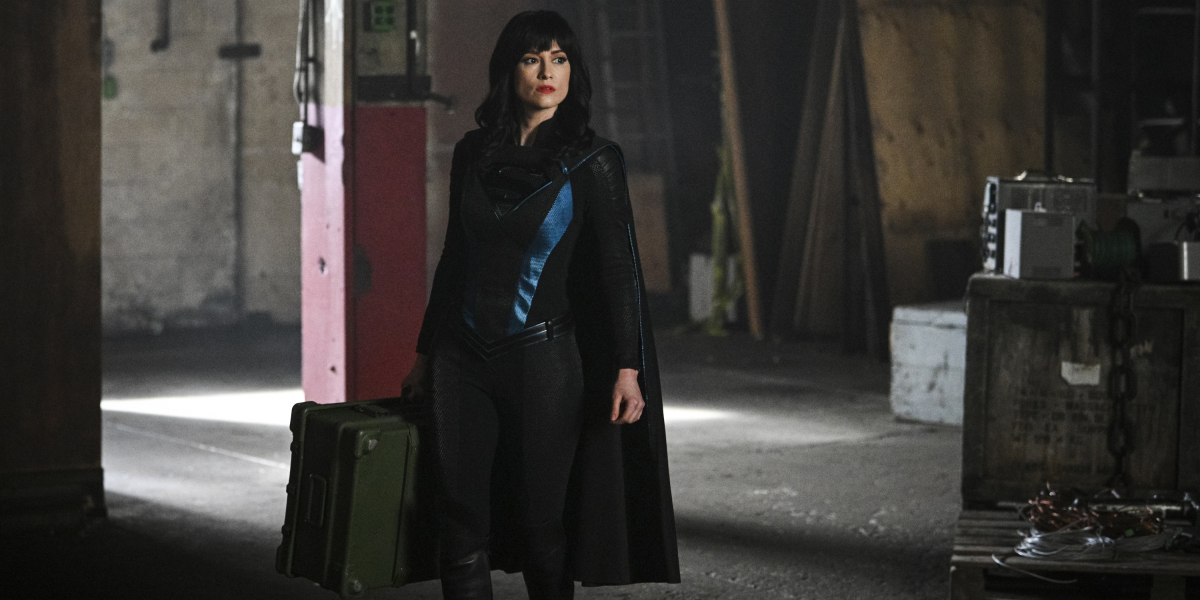 Supergirl season 5, episode 16 is one of my favorite episodes of the current season. Though it could have been a standalone episode, a lot of little moment lended a hand in setting up the big storyline of the season: Leviathan. I mean, it’s really way too late to just being seeing this little bit of progress on the virtual world, Leviathan, and Obsidian Platinum, seeing as we’re over 75% of the way done with season 5. But, nonetheless, great to see movement.

It’s also wonderful that for two episodes now, we’ve seen more focus on Alex and Kelly, both individually (a little) and their relationship with one another. This is the only canon couple on the show currently, and both characters fall to the wayside too much. Kelly’s limited time on-screen over half of the season has been driving me crazy, while Alex’s lack of an individual plot has also been grating at me.

These women — characters and actors — are too important and offer too much in terms of story and potential to the show to so often be pushed aside for plots revolving around characters we don’t need (like Lex Luthor). 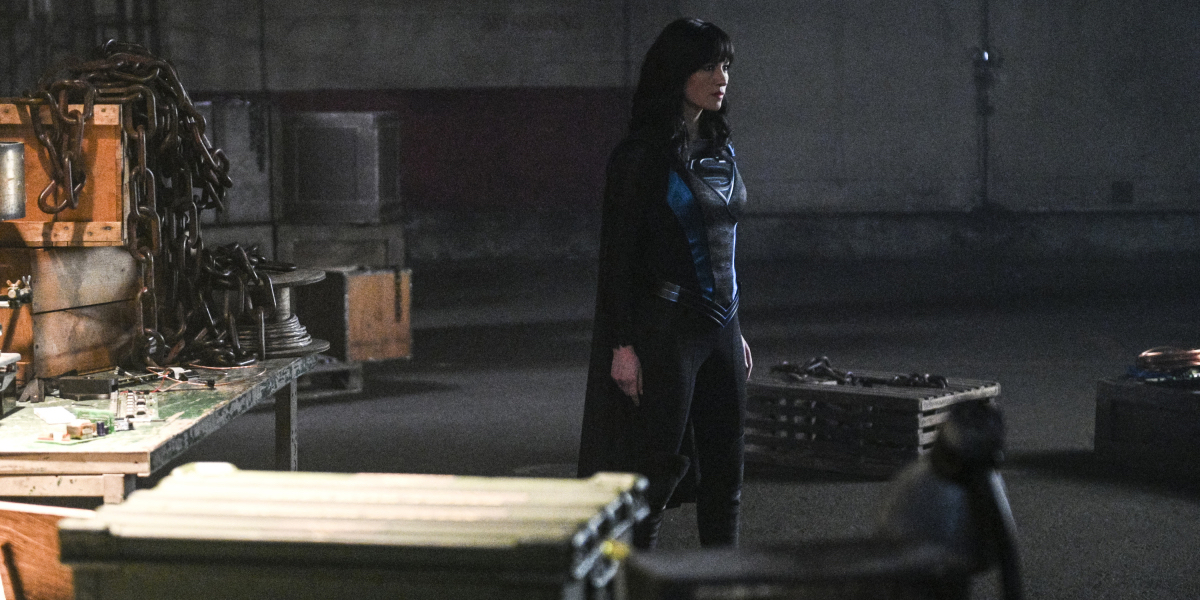 Watching Chyler Leigh and Alex Danvers take the reins is always a welcome change of pace. We rarely see the second leading lady take over for a little while anymore, which is absolutely criminal because of the complexity of Alex Danvers as a character and the talent that Chyler Leigh possesses.

Leigh gave an especially incredible episode as she channelled Alex’s grief, particularly in her first scene on the episode. Alex’s anger is understandable, though it’s heartbreaking to see how grief can cause you to lash out at those you love, even when they’re being nothing but supportive. Considering Kara was grieving as well, paired with Alex’s grief and anger, that scene and fight could have gotten even darker.

I thought Alex’s resentment toward Kara about what her life was like after Kara arrived had been dealt with in season 1, so it felt kind of out of place, but I guess there wasn’t much story to fall back on with Jeremiah and Alex due to his limited time actually appearing on the show.

Back to SuperAlex, it was killer to see Alex take on being National City’s savior, even if it wasn’t the real deal. I loved how comments were thrown in about how Kara makes it look so easy, and Alex finally got to learn more of what it’s like for her sister to have this burden of responsibility on her shoulders with powers that can save people that the police or DEO cannot.

I’d love to see a power swap in the real world. Maybe, since Melissa Benoist is pregnant, an alien could transfer Kara’s powers over to Alex for a few episodes and we can see a new Girl of Steel step up (of course, we’ll need this incredible black suit, too). I’m 100% for more SuperAlex in the future. Please give it to us! 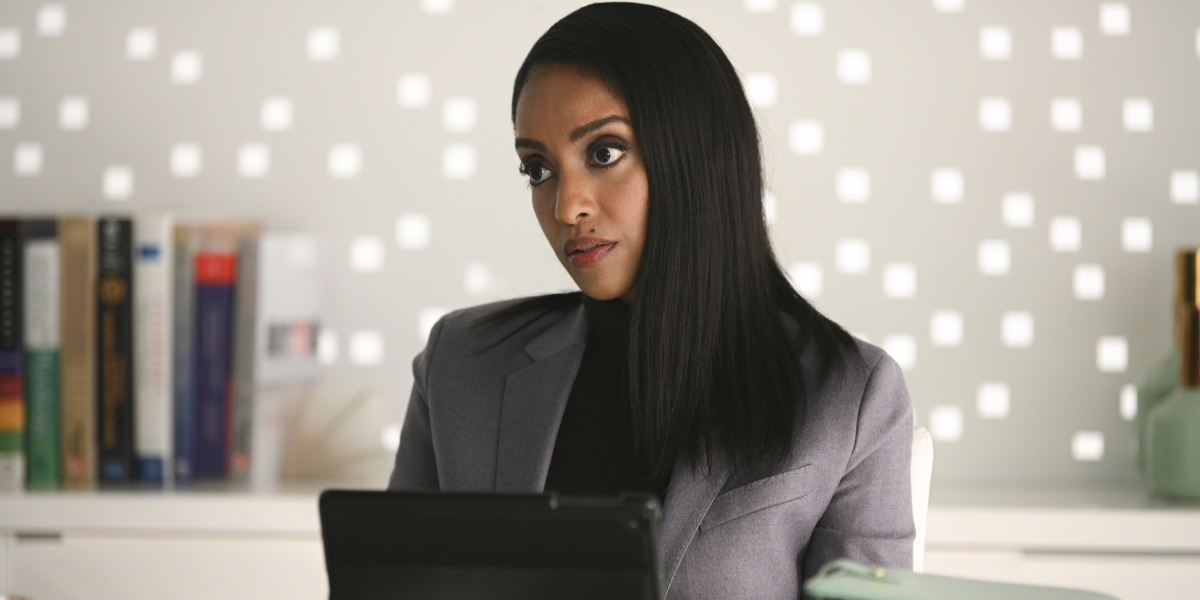 Oh, how I adore Kelly Olsen. She is truly the best addition to the show we’ve ever had, in my opinion (though Nia is a close second).

On Supergirl season 5, episode 16, I’m happy we were able to see a little more of Kelly at Obsidian North, as she begins to realize the project she’s helped to create isn’t, well, exactly what she had anticipated, and the glitches are really causing significant danger to anyone who dares to use the VR lenses.

Now that she’s aware of the glitch, and sees that Andrea isn’t doing much to combat it, it’s thrilling and worrisome to think of what Kelly might do to keep people safe. Even without the Guardian shield, she cares about others, and the primary reason she took this job was to help her therapeutic practices for veterans and those with mental health issues with virtual reality simulations. She’s a hero in her own way, and if this trend continues, we may get to see her step up (and I truly hope we do)! 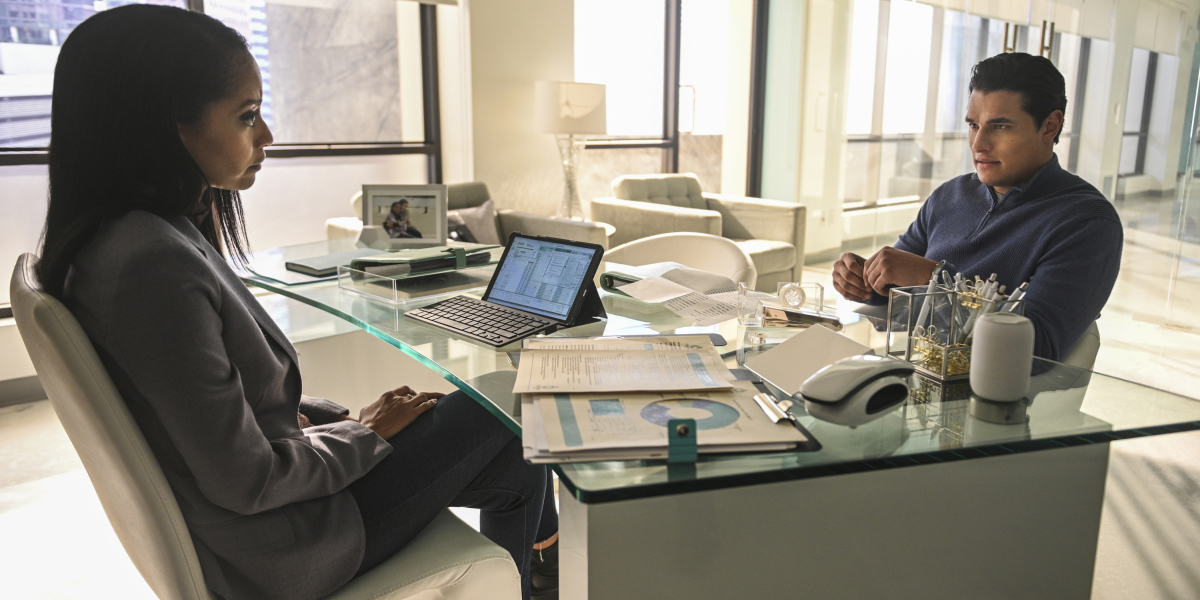 Additionally, Kelly and Alex’s relationship is one of the healthiest relationships we’ve ever seen on The CW, and I want more! Dansen is a beautiful, communicative, thoughtful, and well-matched couple, and their way of handling situations — at least the few we’ve been able to see — is incredibly telling of what a relationship should look like (and how the relationships other Supergirl characters have been in are not held to the same standards).

One of my favorite moments of the episode had to have been when Kelly, even without consulting anyone who has known Alex longer, knew exactly what to do in order to snap Alex back to reality and help her escape the virtual world. Only someone who truly knows their partner could do that… and she did it on her first attempt!

I love that we, the fans, now have a relationship on the show to point to as what we want the others to look like, especially anyone Kara is romantically linked to. There’s no excuse for poor development or unhealthy relationships (painted as perfect examples of love) when you have a relationship like Dansen. We’re going to hold the Supergirl writers to that (and request more Dansen moments and time on-screen for both characters). 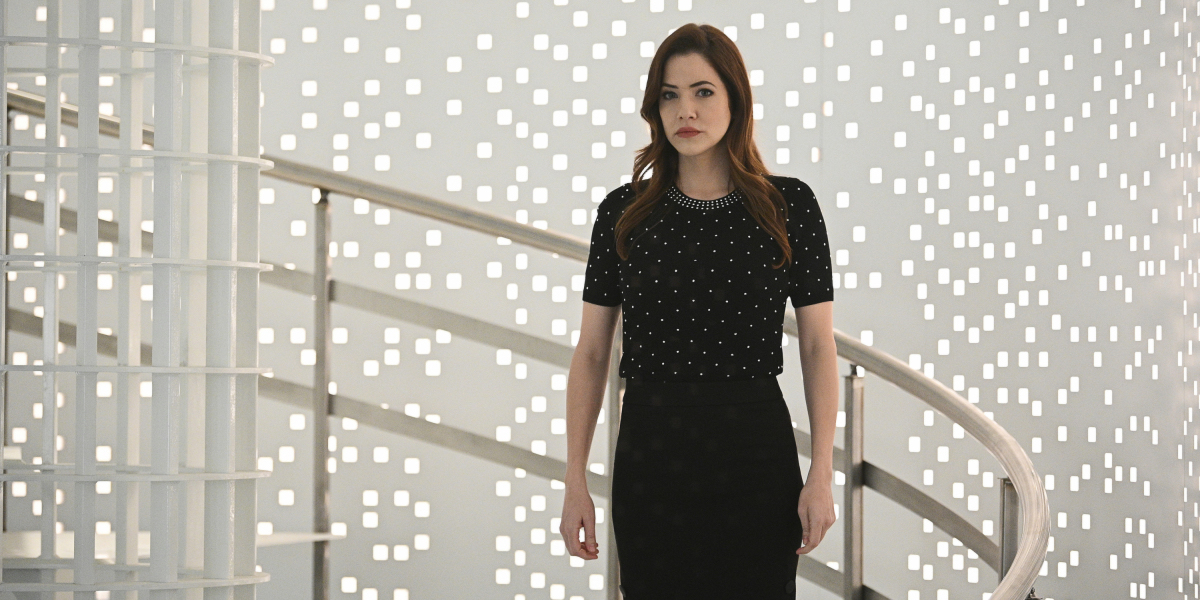 As much as I enjoyed Supergirl season 5, episode 16, I do feel like it could have been executed better. The virtual reality story didn’t really hold my attention as much as it could have because, even though it was the primary focus of the episode, it didn’t really feel like much happened. The big moments were in the real world, aside from younger Alex confronting her older self.

That said, it was really incredible to see Alex find her strength from within, not needing anyone but herself to remind her that she’s just as strong (mentally and emotionally) as Supergirl, and she can handle more than she thinks she can. It was moments like this that excited me for this Alex-centric, virtual reality episode… and I just feel like there could have been more.

I’m also trying really hard to like William, and this story he’s investigating is actually interesting, so it’s helping a little (as long as I don’t think about how I’d rather it were Nia and Kara investigating, but whatever). But being the side character in other characters’ stories isn’t really doing much to develop him individually, which makes it difficult to figure out who he even is.

Like we’re constantly being told, William’s a good guy, but this episode actually showed that a little (for one of the first times) with William and Kelly’s interactions and how perceptive he was about Kelly’s worry for Alex. I don’t know that I’ll ever support his relationship with Kara, but if they’re keeping him around, I really want to see William become an actual character, not just the outline of one. 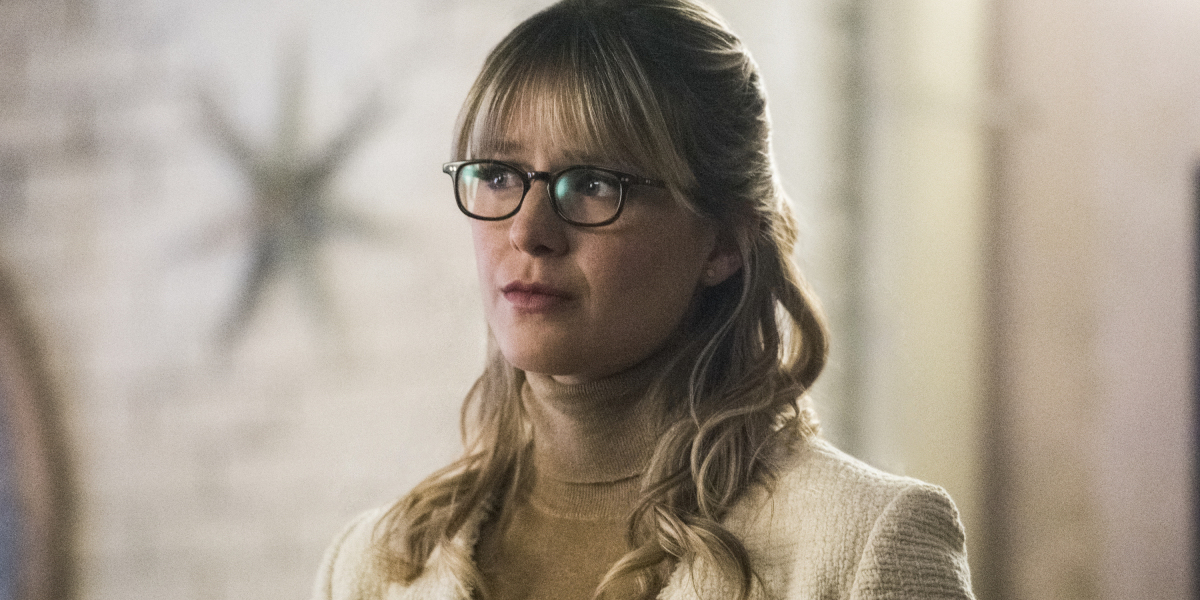 As for Andrea Rojas, I’m so confused. Are we supposed to like her? It’s clear fans should have some level of distrust for her, but from the end of Supergirl season 5, episode 16, it seemed like she was actually directing Eve to fix the glitch in Obsidian Platinum. It’s not like she would do that if she were on Team Leviathan, so what’s really going on?

I hope, on the next few episodes, it becomes very clear whether or not we’re supposed to support her or not, especially if (as confirmed by Julie Gonzalo on Twitter) she’s sticking around for season 6. I really, truly hope Leviathan is not a multi-season villain because this entire story surrounding them on season 5 has been disastrously terrible.

Lastly, poor Kara… I wish she had some more time to grieve since this is simultaneously the second and third parent she’s lost (because Alura turned out to be alive, but she thought her mother dead for decades). Kara never gets to experience and move past her trauma or grief, which has become very tiresome to watch. And this is no different.

Regardless of it being an Alex-centric episode, there was the ability to have one very strong scene with Kara and/or the Danvers sisters that wasn’t a fight, but we missed it. Who wants to bet it’ll never be revisited?

While Benoist and Leigh were stunningly excellent in Kara and Alex’s fight, where was the big moment for the sisters to come back together? Where was their mutual grief and sadness being talked about? Of course, Alex didn’t need to apologize to Kara because Kara knew what was going on right away, but there could have been more communication. This season has been really lacking on the Danvers sisters and their superior bond… Disappointed to say that Supergirl season 5, episode 16 wasn’t any different.

Supergirl continues Sundays at 8 p.m. ET on The CW! Production has currently shut down and the show is on an indefinite (as of now, there’s no return date for episode 17) hiatus. Stay tuned for updates!