We use cookies to ensure that we give you the best experience on Hypable. If you continue to visit us, we will assume that you are happy with it.
10:00 am EST, February 27, 2021

The SpongeBob Movie: Sponge on the Run taps into the wonderful life of Bikini Bottom’s absorbent and yellow friend as he sets off on another feature-length adventure, here’s our review!

“It’s a bit strange isn’t it? Each [sponge’s] life touches so many others, when he isn’t around he leaves an awful hole, doesn’t he?”

Optimism has been in short supply and for some watching a sponge who seems to be fueled by the power of simply looking at the world for all the good it has to offer can seem a bit exhausting. In fact, over the course of the past year I have found myself watching less and less of the nautical adventures than usual.

Instead, the cynicism and sharper wit of other animated shows (both for adults and not) have taken up a more permanent role in my viewing schedule. But every once in a while, that little yellow bundle of joy cracks a one-liner, or a struggling artist (ar-tea-st) emits a sigh so relatable that spending an afternoon in Bikini Bottom does make world does seem a little less bad.

The SpongeBob Movie: Sponge on the Run finally hits the new streaming service Paramount+ and video on demand after almost a full year after the decision to begin pushing the release date.

The SpongeBob franchise has struggled when it comes to full length features. Sponge on the Run meets the low expectations set by its predecessors clocking in a few more laughs per minute. One additional factor that does not work in the films favor is because of the shuffled release schedule, the first episode of the series Kamp Koral created from the movie’s script has already had its premiere in primetime on Nickelodeon.

Having tuned in to the first episode of Kamp Koral, the latest SpongeBob movie film feels much more like a backdoor pilot than a stand-alone feature. Regardless of that fact, the film was never going to win any major awards, but I was hoping for a bit more from the script as some sequences are nearly forgettable as soon as they happen. And despite some incredible zingers, the only meme to come from this is likely going to involve Keanu Reeves.

‘The SpongeBob Movie: Sponge on the Run’ Review 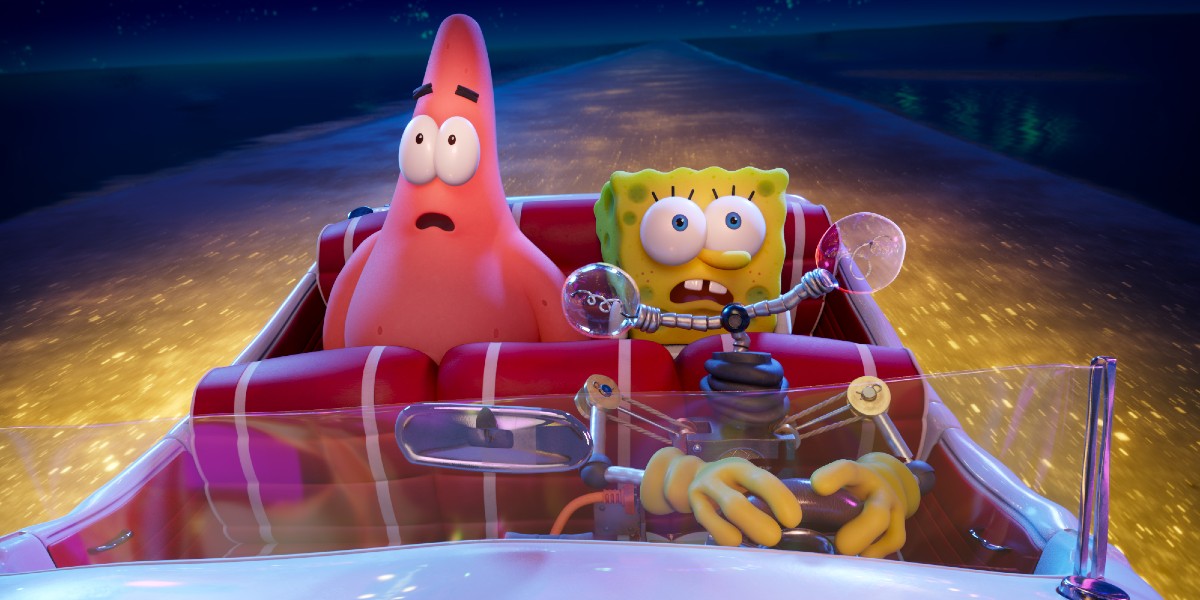 How do you sustain a series set in a town smaller than Bedford Falls for over 20 years? Give the town and the audience someone to care for, someone to root for, someone to complain about, and someone who they simply cannot live without. For It’s a Wonderful Life that person is George Bailey. For SpongeBob SquarePants it is the titular character.

There has never been a doubt that SpongeBob lives a “wonderful life.” He loves Bikini Bottom, he loves his job, he loves his pineapple house, his best friend, his neighbor, his favorite superhero duo, and even those who wrong him. He’s never out of second chances, never runs short on forgiveness, and is always, always there to lend a hand even if it makes the situation worse.

SpongeBob rarely, if ever, is downtrodden and out of willpower. When those waves of hopelessness do creep into his porous figure the mood becomes overwhelmingly melancholy and it is actually quite painful to watch. The series tries to offset these emotions with either overly ugly depictions of sadness or elaborate displays of tears, both of which are meant to elicit laughter rather than pity.

But sometimes, a few moments of raw emotion slip through the cracks. Those are the bits that keep me coming back. Because, let’s face it, after 20 years is anything the able to do anything too surprising?

The movie succeeds on two-fronts. The first is letting SpongeBob be both the unknowing damsel in distress and the hero of his own story. The second is keeping the characters true to form to help make that possible.

It sounds like a simple enough formula to create a franchise film out of, right? But SpongeBob has always suffered from trying to do too much with its story, ancillary cast, when everything that gives SpongeBob its appeal is already on the table. 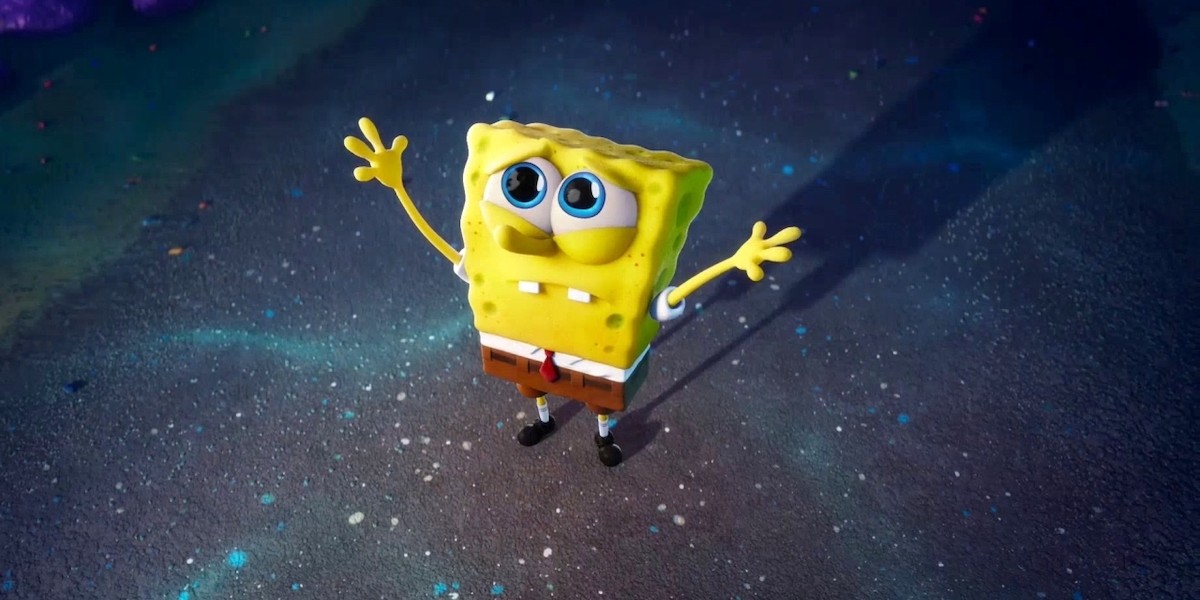 The franchise is no stranger to using mixed media across its films and specials. CG is the worst of the “enhancements,” but it appears to be the “future” of the franchise as Kamp Koral will use the style. The characters lose a bit of themselves as more detail is added in the 4K detail the animation process.

The sponge has been taken out of water in both 2D and CG to interact with the likes of Antonio Banderas, David Hasselhoff, and even the show’s voice cast Tom Kenny, Bill Fagerbakke, Rodger Bumpass, and more. Sponge on the Run follows the same tactic bringing along Keanu in the role of Sage, a spiritual guide trapped in a tumbleweed, as well as Danny Trejo as El Diablo a spirit who traps a town full of dancing zombie cowboys. The latter is unfortunately a wasted guest spot as he does less than Snoop Dogg who pops by for a musical number. It says something when the best part of the entire sequence is a conversation SpongeBob and Patrick have about curtains.

The crux of the story has little to do with zombies and cowboys and Keanu’s growing frustrations with the two anti-heroes he is trapped with for the length of the film. Karen, the long-suffering computer wife of the series’ villain Plankton, finally gets it through her husband’s tiny brain that his greatest hurdle in his quest for the Krabby Patty Secret Formula is not Mr. Krabs. Instead, Plankton needs to focus on the unintentional foil — SpongeBob.

Solution: remove the sponge, get the secret formula, all of Plankton’s wildest dreams come true. And he does just that…in the first 25 minutes of the movie. The scheme involves sending SpongeBob’s pet snail Gary to Poseidon to use for his skin care regimen (sure, okay). While SpongeBob is off playing hero trying to save his pet, the town of Bikini Bottom begins to slowly unravel. Without the town’s only fry cook, even Squidward has to admit that things seem a bit too glum. Even Plankton crawls back to his defeated nemesis and admits that he never gave much thought to what to do after he has it all. Sandy rallies the troops with even Squidward agreeing to save SpongeBob and maybe, if there is time, catch a glimpse of Squiddy G’s one-night-only show.

SpongeBob and Patrick could easily have a buddy movie — even poking fun at the familiar beats of one in jest early on — but instead the film spends time trying desperately to set up SpongeBob for an introspective journey. But how do you get a character coded to only ever look outward to take a moment to realize the role he plays in other people’s lives?

Send him to the Lost City of Atlantic City, a scary, vice-ridden cesspool of moral depravity — their words, not mine — and put on a casino-worthy show complete with heartfelt confessions from the crew of supporting characters.

Despite being told mostly through the lens of Kamp Koral interactions the climax was touching if a bit on the nose for the original concept of the film. Each character gets their moment in the spotlight to talk at SpongeBob, something that for as long as the show has been running, it has not found a minute to pay SpongeBob what he is due. 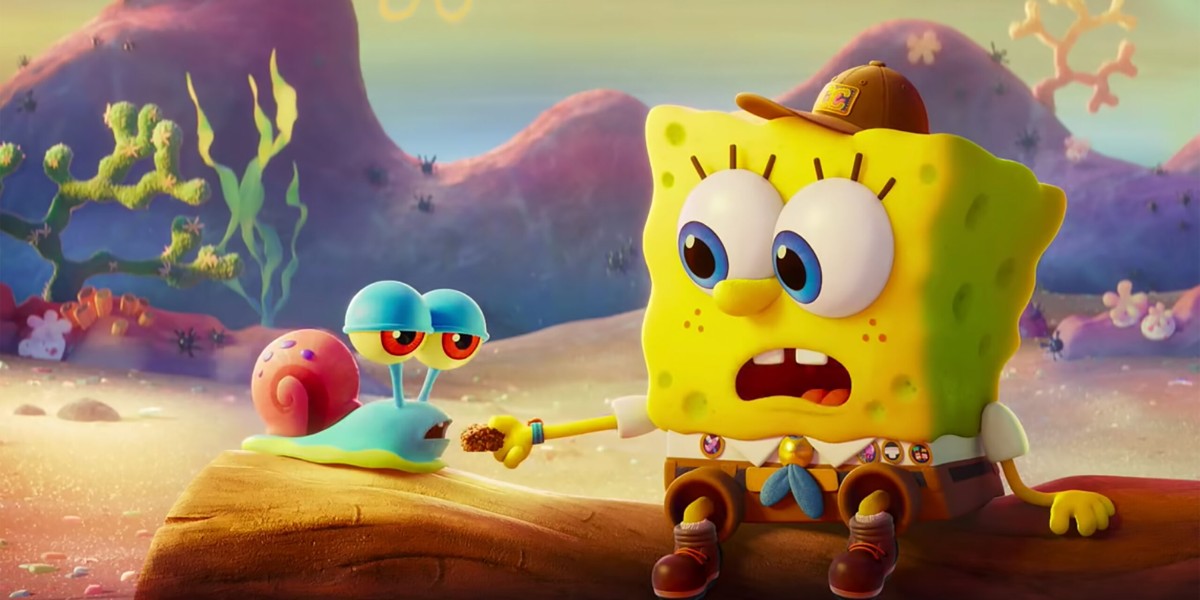 The heart of SpongeBob is in how he sees the world as a place of endless possibility to produce good. It is also how others fall into his orbit, using him as their sun. When things begin to cloud over, they miss the warmth he radiates. These stories all tie together the message that if you take a moment out of your day to be a friend, encourage someone else, make someone else the hero of their story, it will make a world of difference in ways you may be completely unaware of.

Once crew exit stage right ala The Birdcage and set things right in end, so ends another tale of the characters set down by the late creator Stephen Hillenburg two decades prior.

I don’t think that SpongeBob will ever be able to top the 20-minute tried and true standard. But so long as Nickelodeon keeps taking us to Bikini Bottom, whether in cinemas, the theater, or from the comfort of the couch, I’ll be ready to answer the call.

The SpongeBob Movie: Sponge on the Run is available to stream on Paramount+ and on video on demand March 4.