Leia Scott is a 26-year-old budding fashion designer who’s fresh off of a devastating divorce. If there are two things her failed marriage taught her, it’s that true love doesn’t exist and creating her own good fortune is far more satisfying than losing herself in another person. So she throws herself into her work, her relationship with her sister, and just trying to enjoy all that life has to offer a young, single woman. Including flings with super hot guys.

Enter Tarquin Balfour. Still reeling from having his heart broken, the former perennial player is hanging up his membership card and searching for “the one.” He’s saying goodbye to one-night stands and nameless women, and, instead, going after what he really wants: A partner who’ll love him for who he is, not what’s in his bank account.

Sparks fly almost immediately when Leia and Tarquin meet one New Years Eve while she’s visiting her sister in London. Unable to resist one another, they make the most of their time together until Leia has to return to New York City. The problem? Though he agrees to a fling with Leia, Tarqin will stop at nothing to make her see that they belong together. But first, he has to prove to Leia that he’s worth risking her heart for and breaking her promise to herself, which is easier said than done.

It’s a good thing he’s up for a challenge.

I just want to say up front that Jacquelyn Middleton is one of my favorite authors of all time. Full stop. So there was never any doubt that I’d love Say Hello, Kiss Goodbye, her fourth novel in the charming, heartfelt, and London-loving world she has created.

Middleton has a way of finding the hope and beauty in every situation and circumstance, always highlighting possibilities rather than settling for what’s probable. She takes real life and injects it with such love and wonder, while also grounding everything through explorations of mental health. Her books are a true joy to read and I’m so grateful to be able to jump into them when I need a bit of extra inspiration and hope.

(And, as a perpetually single thirty-year-old hopeless romantic who has searched for true love her entire life, I’ll take all the hope I can get!)

One of Middleton’s greatest strengths is the way in which she develops and humanizes her characters. She imbues them with so much heart and emotion that they feel like friends you’ve known your whole life, not just characters you met in the pages of a book. Say Hello, Kiss Goodbye‘s Leia Scott and Tarquin Balfour are no exception.

Although these two were introduced in two previous books in this world (Leia in Until the Last Star Fades and Tarquin in London Can you Wait?, to be exact), you don’t need to have read them to understand or grow to love these characters. In fact, I’ll admit that I was pretty indifferent toward them when they first debuted. Both were cogs in a sort of destiny machine, serving someone else’s story. But in Say Hello, Kiss Goodbye, that all changes.

Leia and Tarquin are both independent people with a lot of personality. They’re driven, outspoken, endlessly supportive of the people they care about, and, if I may, both very attractive people (inside and out). But neither is without their fair share of weaknesses and bits of brokenness. However, it’s all of these traits, together, that make them such a great match for each other. They complement each other’s strengths, sooth and validate each other’s weaknesses, and serve as a balm for their brokenness. It’s such a joy watching them together.

One of the largest contributing factors to my love of these characters and true enjoyment of this novel overall is its “open-door policy,” when it comes to both sex as well as mental health. While other books and stories (romance or otherwise) tend to shy away from those important aspects of the human experience, Middleton steers into them without hesitation.

Out of all of the novels she has written so far, Say Hello, Kiss Goodbye is by far the steamiest and most sexually frank. There aren’t any “fades to black” or reminiscing of sexual experiences after the fact. This story takes the reader through everything in real time: The emotional chemistry build up, the sweet and tender moments, the longing, the release. Everything.

By doing so, Middleton puts all aspects of her characters on display and provides crucial insight into what makes Leia and Tarquin really work as a couple. Sex is a natural and important part of any romantic relationship, and this book approaches sex scenes with both excitement as well as reverence. 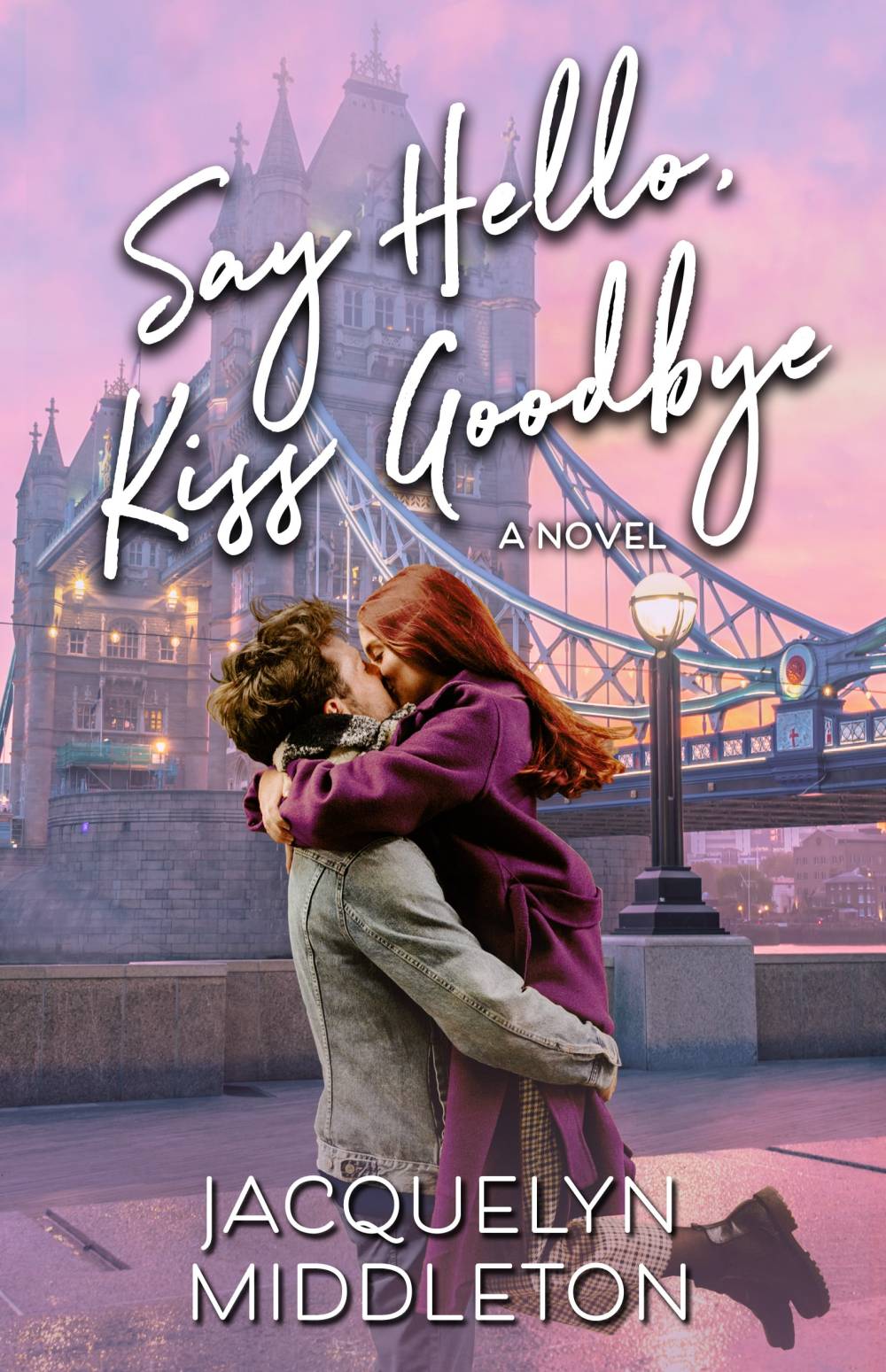 As a side note, I will say that there is a particularly steamy scene that takes place on the Tower Bridge. (You know, the one that people always mistakenly refer to as the London Bridge.) It caught me by surprise, but in the absolute best way possible and will be a scene that I’ll never ever be able to forget. In all of my years of reading, I’ve never read a scene that made my heart race as much as that one did. It’s that good.

Similar to the sex scenes, this novel is also very transparent about its characters’ struggles with mental health. While Middleton has openly discussed mental health in previous novels, Say Hello, Kiss Goodbye goes even further by pulling back the curtain on therapy sessions. Like the sex scenes in this novel, there are no “fades to black” when it comes to therapy or working through the lies of the mind. Many (like Tarquin at the beginning of the novel) view mental health as something that’s either not all that important or incredibly scary. But it’s neither of those things.

As someone who has struggled with her fair share of depression and anxiety and sees a psychologist regularly, I really appreciate the way Middleton normalizes mental health and works hard to break down the stigmas around it. One of the sequences in Say Hello, Kiss Goodbye that stood out most to me is one involving a walk-and-talk therapist session. I found myself relating to everything that character confessed, including their biggest fear (which directs most aspects of their life).

If nothing else, Say Hello, Kiss Goodbye is groundbreaking in the way it approaches mental health and makes the characters’ journeys feel that much more real. It’s the gold standard that all romance should aspire to.

In keeping with the themes of mental health and self-care, one more aspect of Say Hello, Kiss Goodbye that I loved and want to highlight is Leia’s gratitude journal. An activity suggested to her by her psychologist, Leia takes time every day to write down three things she is grateful for. Even if she has had the shittiest of days, this exercise promotes mindfulness and is just a great way to stay in touch with herself.

I can’t tell you how much I love this idea. Since the beginning of the stressful and chaotic mess that is 2020, gratitude and reflection have been on my mind quite a bit. In a time where we’re often reminded that nothing is permanent and everything can change in an instant, there’s a lot of calm and solace to be found in recollecting everything there is to be grateful for, down to the smallest (and even seemingly trivial) details.

And so I really connected with this assignment, so much so that I discussed it at length with my own psychologist and have embarked upon my own gratitude journey (recording my thoughts in a small pink notebook that Jacquelyn Middleton actually sent along with my copy of Say Hello, Kiss Goodbye). I’m so excited to see what comes of this new habit.

From the two main characters’ chosen career paths (upcycled fashion and abandoned property redevelopment) to their focuses on their own mental health to their struggles with taking a risk with love, Say Hello, Kiss Goodbye is all about the power of second chances. For people like Tarquin and Leia who have had their hearts broken and future plans destroyed, second chances come with a lot of risk of further devastation. But, as Say Hello, Kiss Goodbye demonstrates, the leaps of faith in giving second chances, both to yourself as well as others, can lead to something far better than you could’ve ever imagined.

Sexy, sweet, and overflowing with hope, Jacquelyn Middleton’s Say Hello, Kiss Goodbye is the perfect romance for the modern romantic. Filled with breathtaking moments, slow-burning “Will they? Won’t they?”s, and honest discussions of feelings and fears, this book will satisfy every craving while also leave you yearning for more.

Regardless of if you’ve read Jacquelyn Middleton’s previous novels, you won’t be able to help yourself from falling in love with this wonderful romance. Once you say hello to this love story, you’ll never want to say goodbye.

Say Hello, Kiss Goodbye is now available from Amazon and Barnes & Noble. Also, don’t forget to add it to your Goodreads “to read” list!