August Landry has always been a loner. It has just worked out better for her that way. However, after moving to New York City to finish college, she has no choice but to break that rule; first by becoming the fourth roommate to a group of tight-knit friends and then by meeting a mysterious girl on the Q train.

But meeting Jane is, quite possibly, the best thing to ever happen to August. She’s never looked forward to anything the way that she looks forward to her chance meetings with this gorgeous and charismatic girl on the train. But, as much as August loves seeing her crush on the Q, she soon realizes that their run-ins are more than coincidence: They’re magic.

No, really. Jane is a 1970s punk angel who has spent the last 50 years displaced in time and with her fate intertwined with the Q train. That is, unless August, serial cynic and lone wolf, can work together with all of her new friends, in between classes and shifts at the neighborhood pancake house, to figure out how to break Jane out of her time loop before it’s too late.

One Last Stop is a joyous adventure filled with memorable characters, a fascinating mystery, and mouth-watering depictions of breakfast foods. Basically, everything you could ever want in a rom-com.

But it’s so much more than that. It’s also an exploration of identity and just how much fear and hope are at odds with each other in our lives. It’s magical in all of the best ways. The ways that make your hopes soar and your heart race. The ways that make you suspend your belief while also lean into believing in the impossible.

I know that’s a lot to put on a single book, but it’s not just any book. It’s a Casey McQuiston book.

Like Red, White & Royal Blue, One Last Stop centers on the blossoming relationship between two twenty-somethings who each have their own struggles but find a much-needed escape, as well as a much-needed confidante and ally, in one another.

When we first meet August in One Last Stop, she’s very much a Veronica Mars-type: Deeply entrenched in a life-altering mystery with her single parent, but also looking for space to figure out who she is separate from that. She’s a textbook “Marshmallow” who pushes everyone away in order to save herself from pain, but she’s incredibly sensitive and a fierce friend to those she lets in.

August is a cynical loner who has purposefully gone through life without attachments. She learned early on that attachments and expectations only lead to heartache and pain. She’s also crippled by fear and questions of personal identity, aspects that make her a really relatable protagonist (especially in today’s world). But throughout the course of the novel, as she begins to open up to Jane and her roommates, as well as New York City itself, her more vulnerable and personable side shines through. The moments in this novel where she’s truly at ease and laughing with her friends are some of the most beautiful. Her journey is so much fun to witness.

And then there’s Jane. Strikingly beautiful punk rock-yet-incredible-softy Jane. Being stuck on a train for fifty years would drive even the most sane person off the edge and transform them into a cold-hearted person, but that’s not the case here. Though she has a tough exterior and constantly makes it clear that she doesn’t suffer fools, Jane is super compassionate towards everyone and constantly finds the positive (and potential) in almost every situation. She has an almost childlike wonder at times but a fierce protectiveness of others.

Honestly, I think this book’s one and only misstep is the lack of insight we, as readers, get into Jane’s perspective. Red, White & Royal Blue was very much equally Alex and Henry’s story whereas One Last Stop is really just August’s. There are moments toward the end that go a long way into humanizing Jane and elevating her from being an almost “Dream Girl”-like figure, but they feel a bit too little too late. That’s not to say that she doesn’t have an arc or that she’s simply an object of desire (because she very much does and is absolutely not), but I wish we could’ve gotten more from her perspective. 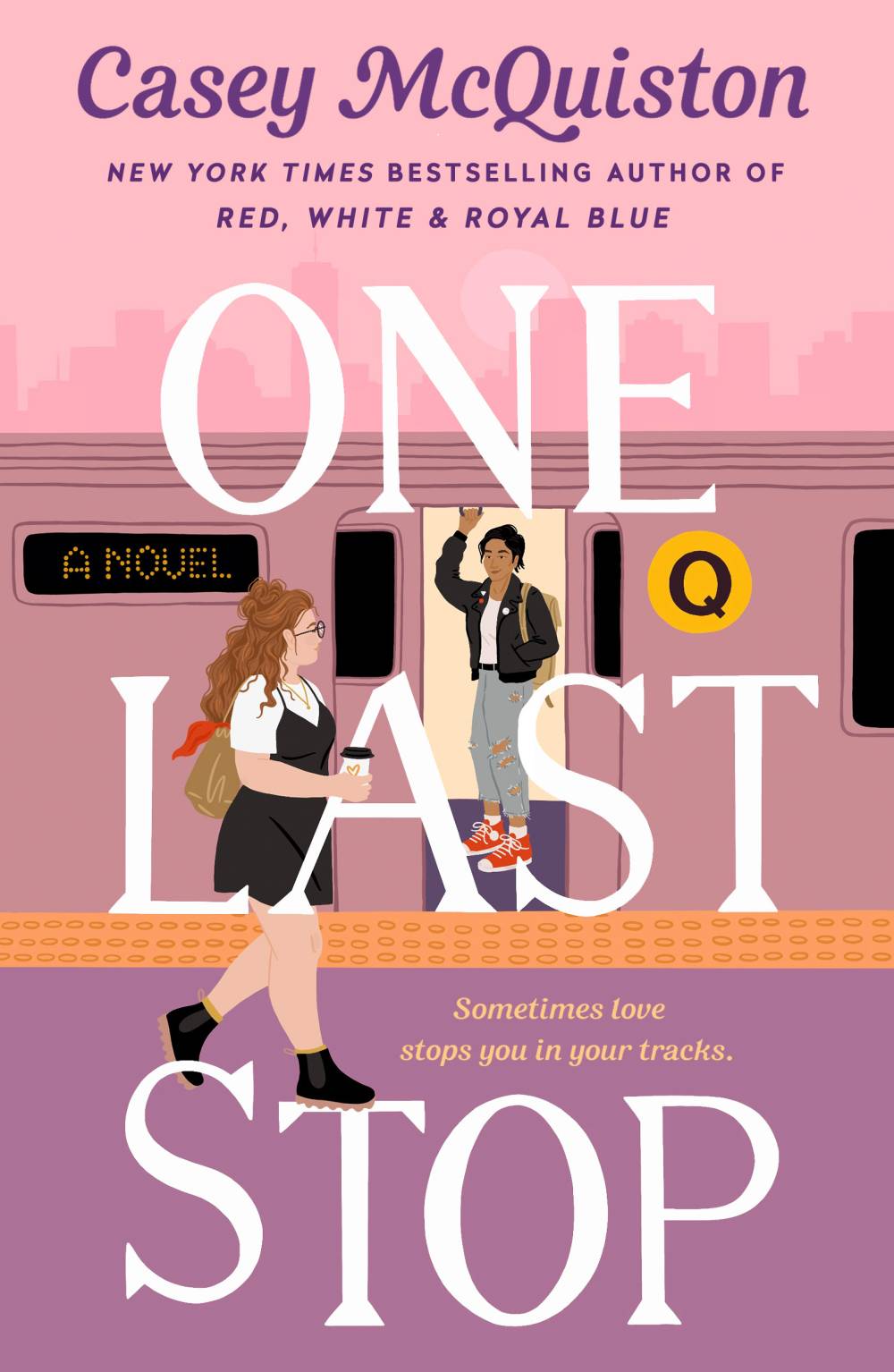 Though some things about Jane are a bit unclear, her affection for August is never in question. The chemistry between the two main characters is practically electric. There’s an immediate spark between the two of them that makes it impossible not to root for them. When they’re together, they have such an easy rapport that’s filled with humor and compassion and so much sexual desire. They’re nothing short of the perfect couple. (Aside from the time travel issue, of course!)

Obviously, their relationship isn’t without its obstacles, but what’s a rom-com without some tension? Because Jane is trapped on the train and August can’t feasibly ride it all day and all night, there’s the perfect amount of yearning for the two to be together (both by the characters themselves as well as the readers) baked in to the story. And with the threat of August’s plan to help Jane succeeding in a way that would separate the two, every moment the pair is together is filled with appreciation.

I could talk about August and Jane for a while longer, but also wanted to make sure to mention the colorful cast of friends and supporting characters, namely Niko (a budding psychic), Myla (a Black engineer-turned-artist), and Wes (a tattoo artist). Though they’re not the focus of the novel, all of August’s friends feel so life-like and nuanced from the very start. They’re incredibly intelligent, endlessly hilarious, and fiercely protective of those that they love.

Not only that, but they’re all beautifully queer. One of this book’s main strength is the way in which the characters never need to explain or justify their existence (as it should be). They are who they are, and references to their sexuality or identity are only made after we’ve known them for a while. Their sexual preferences and gender identities are important, sure, but they aren’t at all the most interesting aspects of who they are. All of these characters are just living their lives genuinely, openly, and lovingly.

On the flip side, though, One Last Stop doesn’t hold back when it comes to celebrating queer culture and the characters’ pride in themselves and their community. The first few lines of the story are part of Niko, Myla, and Wes’s ad for a new roommate, and they stipulate that the roommate must be queer & trans-friendly, which really serves as a stipulation for the entire novel. Expertly woven in with the time travel aspect of the story, his novel honors the history of the LGBTQIA+ community, as well as all those who fought to effect real change, revels in the freedoms and joys of the modern day, and looks ahead to the future with so much hope and excitement. It’s the perfect balance.

In addition to August’s core friends, One Last Stop takes New York City, a colorful personality in its own right, and makes it, too, a crucial character in the story. This novel takes some of the things people complain about most when referring to the bustling city (like the trains) as well as some of the most mundane and humdrum aspects of living there, and makes them mothing short of magical. This, mixed with mouth-watering depictions of fluffy pancakes and loaded breakfast sandwiches that will give the sandwich in Birds of Prey a run for its money, really makes the city come alive with each and every page turn.

A wonderfully delightful and endlessly swoon-worthy follow-up to her stunningly memorable debut, Red, White & Royal Blue, One Last Stop is an inventive exploration of fear, love, and identity. This book is everything you could’ve hoped for in a time-traveling queer love story. Casey McQuiston has done it again.

One Last Stop by Casey McQuiston is now available from Amazon, Barnes & Noble, The Book Depository, or your local bookstore. Also, don’t forget to add it to your Goodreads “to read” list!

by Michal Schick
by Kendra Cleary