We use cookies to ensure that we give you the best experience on Hypable. If you continue to visit us, we will assume that you are happy with it.
12:43 pm EDT, October 2, 2019

Shadow and Bone, based on Leigh Bardugo’s best selling GrishaVerse books, gave us our first look at the official cast.

And it is absolute perfection personified.

YA fantasy fans were absolutely thrilled when author Leigh Bardugo announced that Netflix would be adapting her novels into a series. However, the question was — which one? Both her GrishaVerse series of books — which includes the Shadow and Bone trilogy of Shadow and Bone, Siege and Storm, and Ruin and Rising, and the Six of Crows and Crooked Kingdom duology — are incredibly popular.

However, it ended up that fans of both series would be able to see their favorite characters on the small screen, as the official announcement came that Netflix would be adapting both GrishaVerse series into one, called Shadow and Bone.

That announcement was back in January, which means that us GrishaVerse fans have had very little to sustain them for quite some time. However, that information fast was broken today when Netflix and Leigh Bardugo gave us our first look at the official cast. Check them out below! 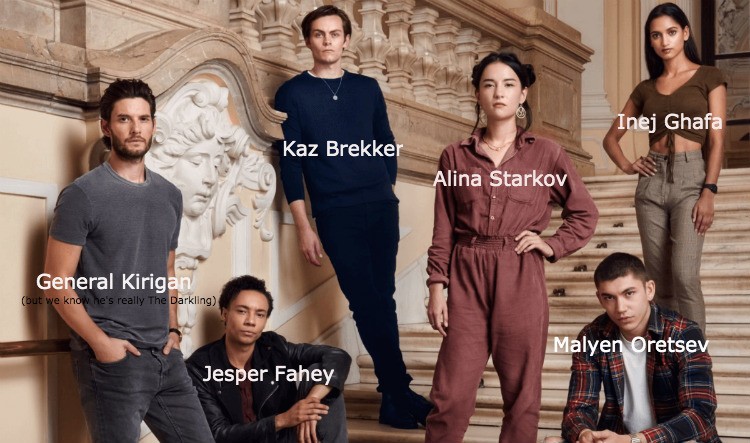 Not pictured, but still part of the cast are Sujaya Dasgupta (Press, Guilt), Danielle Galligan (Game of Thrones, Krypton), Daisy Head (Harlots, Guilt) and Simon Sears (Winter Brothers), though we have yet to know which characters they’re playing.

So far, Shadow and Bone boasts a fantastic looking cast in front of the camera and an impressive crew behind it as well.

Eric Heisserer, writer/producer of Arrival and writer of Netflix smash hit Bird Box, will serve as head writer, show runner, and executive producer. Stranger Things Shawn Levy will likewise be on the project as an executive producer, along with Leigh Bardugo herself!

And while we don’t know too much about the story right now, Leigh Bardugo stated in her newsletter that while the show “isn’t a perfect analog,” she’s been “thinking of Season 1 as getting Book One of Shadow and Bone and Book Zero of Six of Crows.”

We have no release date yet for Shadow and Bone, but another one of the executive producer’s confirmed that shooting is currently underway in Budapest, so hopefully we hear more soon!