We use cookies to ensure that we give you the best experience on Hypable. If you continue to visit us, we will assume that you are happy with it.
4:51 pm EST, March 11, 2021

On Nancy Drew season 2, episode 7, a disappearance at a local hotel widely known to be haunted brings Nancy, George, and Bess to an internal discovery and a shockingly human conclusion. Meanwhile, Odette’s ready to play.

Nancy Drew season 2, episode 7 plays with some classic themes and elements, while still delivering the writers’ own twists and turns. It’s a brave episode that, for the first time in a while, weens off of the supernatural to give our characters something a little more manageable to handle.

It’s the girls’ turn to team up, heading off to find a missing girl after Nancy is approached by college students, post-hazing gone wrong. But most of all, who doesn’t love a haunted hotel? 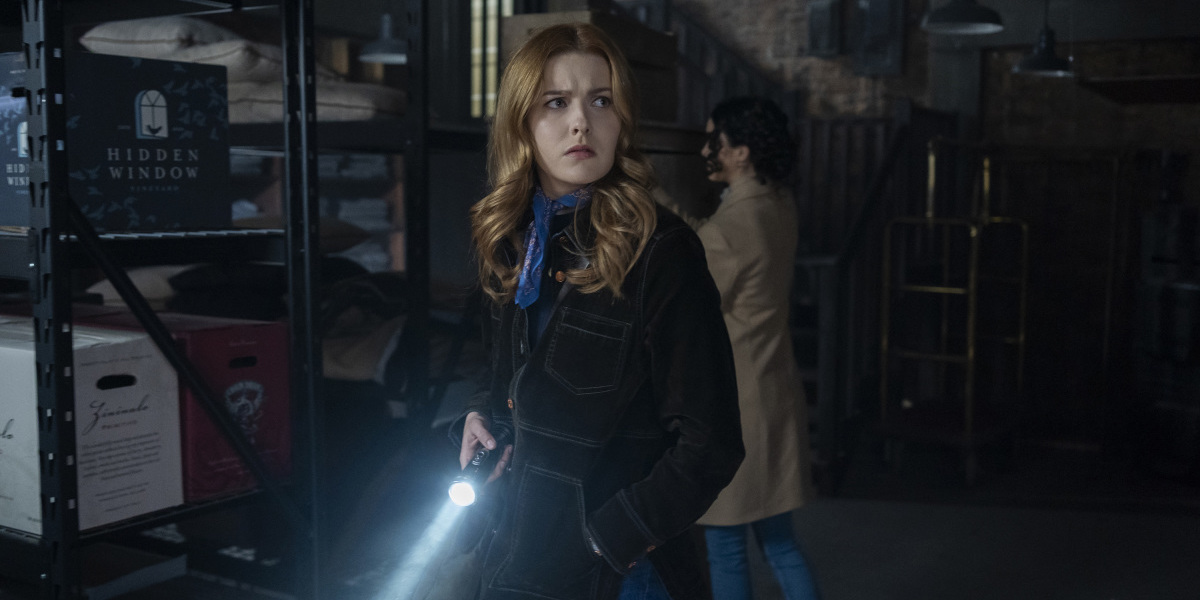 Honestly, I’m very happy with Nancy Drew season 2, episode 7. Something I’ve been missing so far this season is the more grounded, human element, leading the mysteries from a supernatural starting point to a satisfying, human end. We got a little of that with the Aglaeca’s demise, but it wasn’t the same as, say, when Owen died and it turned out that Josh was behind it.

With the Aglaeca being such a formidable foe and Nancy unwittingly releasing dozens of spirits on the unsuspecting residents of Horseshoe Bay on Nancy Drew season 2, I truly was not expecting the show to back off on the supernatural aspect so quickly, but am entirely pleased that was done. 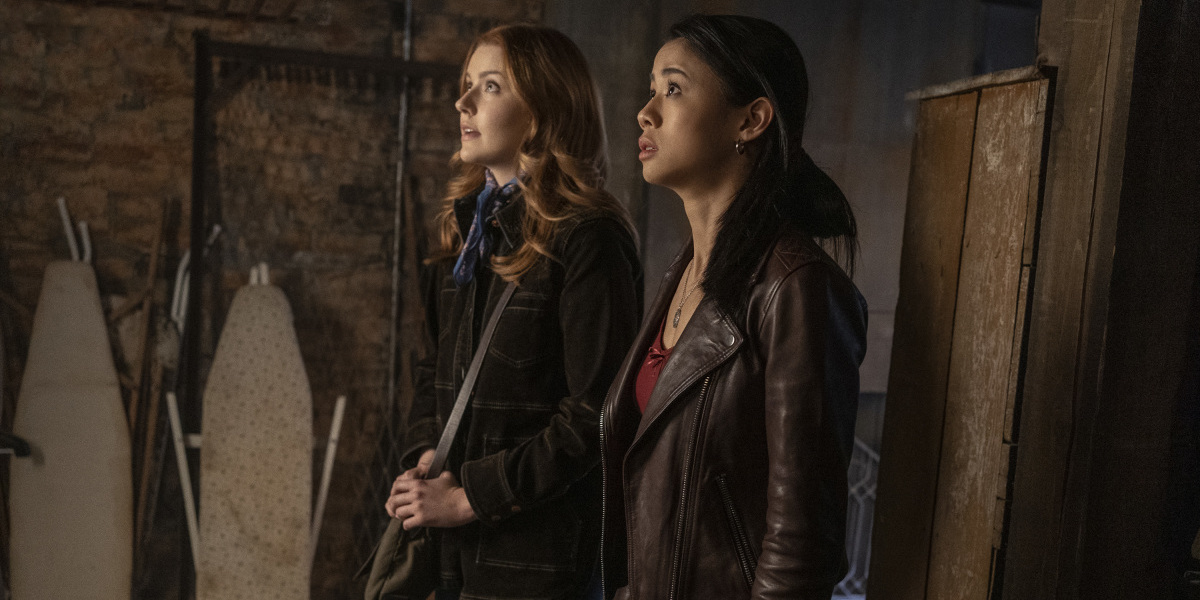 Honestly, nothing confused me more about Nancy Drew season 2, episode 7 than Odette yelling at George through the mirrors and then helping that girl out of the dumbwaiter. To see an antagonist stick around like this is usually quite disappointing, but Odette is actually interesting, and clearly there’s more story to be told than we could see from her Aglaeca form.

To say I have no idea where this story is headed would not be an understatement. At this point, I don’t even have fleshed out theories about what Odette’s endgame could be, nor what could help separate her spirit from George’s. But that makes the story even more exciting, as I’m counting on the writers to deliver something fantastic.

I really feel for George, though. As if dying wasn’t enough, she’s come back and doesn’t feel right in her body, partially because Odette’s taken up residence there as well. She’s got a lot to deal with, and with Nick pressuring her to open up (as if that wasn’t hard enough for her before), George is headed for a full-blown meltdown.

The aftermath of Odette for George is potentially the most exciting aspect of this story because who knows what this could do to George or how it could change her. She’s been very guarded and rough with the people who care about her, and maybe Odette’s horrifying past and George’s near-death encounter will show her that life is too short to push everyone away. 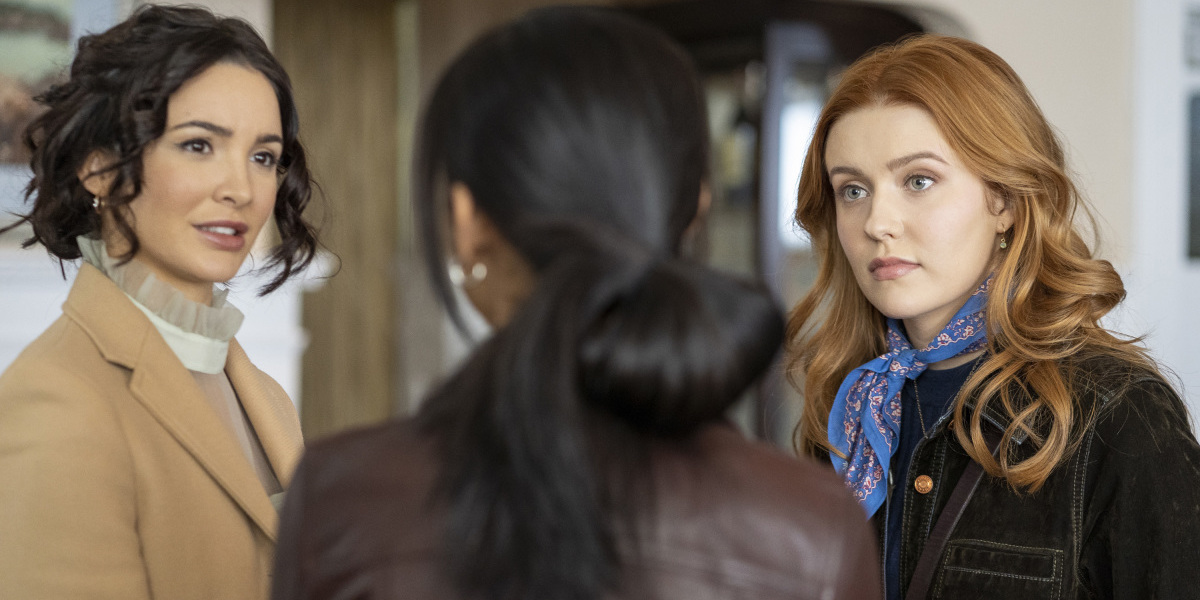 More exciting than the mysteries on this show is the dive into Nancy Drew’s headspace that we are fortunate enough to get every few episodes, as we see on Nancy Drew season 2, episode 7 with Nancy contemplating following through on her dreams of Columbia.

As Nancy listed everything she’s been through over the last few months of her life to the girl that ran away, it really sunk in how much shit the universe has thrown at Nancy. Losing her mother wasn’t enough, she had to discover her entire life she had been lied to by her and her father as well? Not to mention the million other things that anyone else would have struggled to handle alone, much less at the same time.

Nancy is such a beautifully complex woman, it’s hard to believe that she’s managed to stay this composed so far. It’s time for Nancy to fall apart for a little while before putting herself back together again, with the help of her friends. She did that a little at the beginning of the series as she struggled with her mother’s passing, but has Nancy even really dealt with that grief yet?

Nancy will consistently put everyone else and their problems, particularly if there’s a mystery to solve, before her own. She consistently shows up for everyone else when they need her, despite what she’s going through. I’m ready to see Nancy acknowledge this and take some time to discover what she wants, alone, and have her friends support her.

I’m still incredibly bitter about how they all blamed her for the Aglaeca coming after them when, if you watch episode 15 when the Aglaeca was first summoned, they practically forced her to let them take part in the ritual. She declined, unwilling to put them in harm’s way. None of them would have been willing to let Owen die for the Aglaeca’s toll either.

Anyway, I simply want to see the rest of them — aside from Ace who already has — start to make up for their obnoxiously shitty treatment of Nancy. They would all be dead if it wasn’t for Nancy, and it’s time for some acknowledgment and reparations.

As for the prospect of Columbia, it would certainly be interesting to see Nancy head off to college. It seems like the natural next step for her, as she attempts to find her new normal and get her life back on track.

If she does decide to attend college outside of Maine, we would certainly be subject to a time jump of some kind (whether the writers choose to come back the following summer when Nancy is visiting home or after she’s gotten her degree). 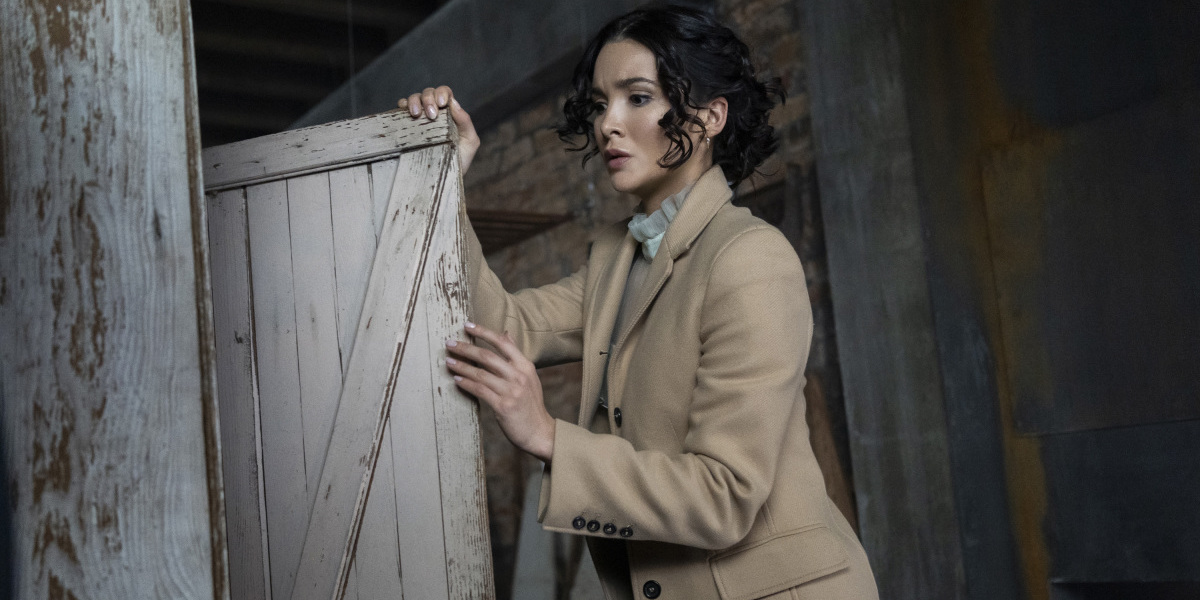 The mystery on Nancy Drew season 2, episode 7 turned out to be one of my favorites of the entire show, which I was not expecting. The kidnapped girl that turned out to have just run away because she didn’t like college was such an unexpected twist, but it worked perfectly. I love that not everything on this show has to be directly tied to the supernatural, even if there are supernatural elements involved (in this case, Odette’s appearance when the dumbwaiter crashed).

There were no life or death circumstances. The “mystery” was just a bunch of women with a lot going on, trying to find their way through it (and a hotel embracing capitalism and the people’s desire to believe something is special). It’s perfectly imperfect moment, and was worth every minute for the singular scene at the bus station.

I’d love to see more episodes like this, giving the characters a chance to exist in the non-supernatural world and face the challenges of normal life.

As for the mystery of the final moments, I’m quite intrigued to see where this thing with Odette is headed. It seems like Odette reacts the most to Bess, which is probably to do with her Marvin ancestry and could be putting Bess in a dangerous scenario.

Plus, Bess’ husband (uh, what?) is now in town, so where’s that headed? From the trailer of the following episode, it seems like Bess married him for money, but clearly that didn’t work out how she intended if she came to Horseshoe Bay in a van…

It’s disappointing though that Lisbeth is not currently in the picture because this could have been a great story to further develop their relationship. 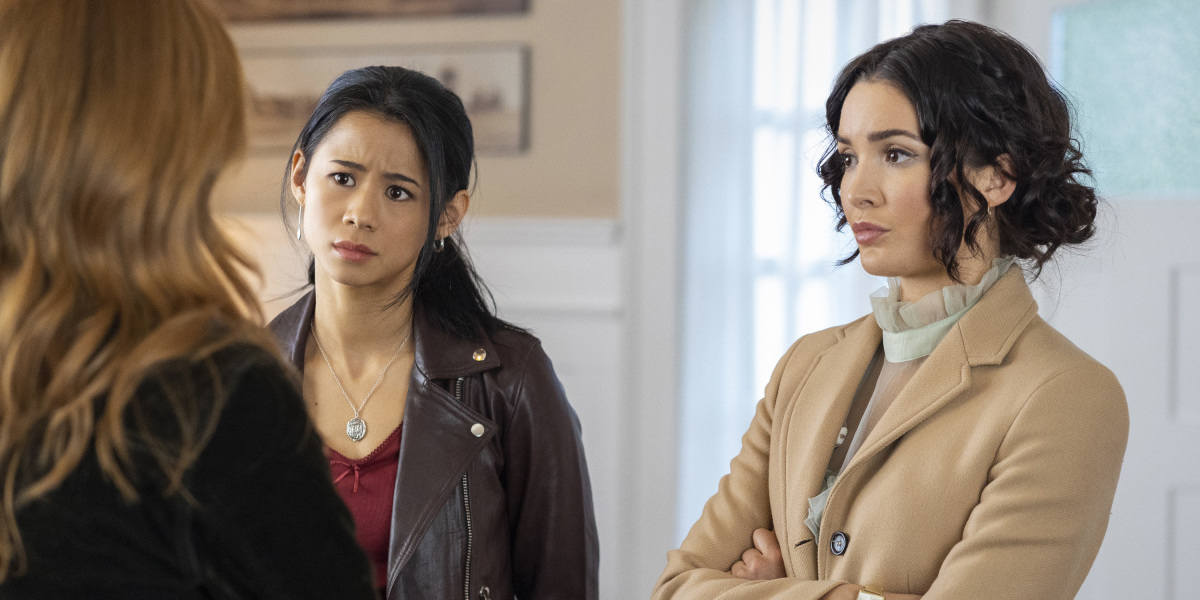 Ryan Hudson is the scourge of Nancy Drew, and I’m really hoping to see the end of his character (in one way or another) soon. There’s truly nothing interesting about this man, and I will absolutely never get over how he manipulated a 17-year-old George into being his mistress. It’s despicable, and there’s no “redeeming” him at this point.

Ryan working with Nick to take down his father is a good choice for Ryan to accidentally get himself taken down too. Or, better, to have Everett Hudson take out his son to save himself. I’m all for ridding ourselves of Ryan Hudson on Nancy Drew forever.

Aside from Nick working alongside Ryan, I’m glad he at least has a story and mystery of his own now. As I wrote in my last review, he’s just felt like George’s boyfriend over the last few episodes with nothing to do except obsess over George. It’s gotten tiresome, and Nick deserves better than to be reduced to a love interest. 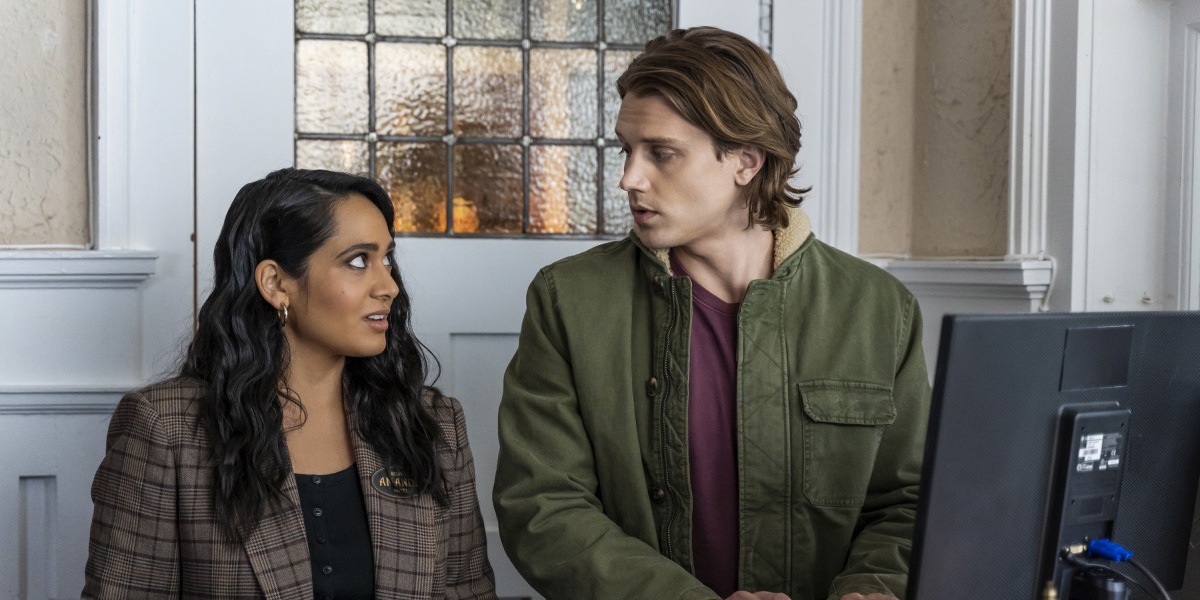 Lastly, the scenes with Ace, Nick, and the college girls were just delightful. Even though they didn’t really add anything to Nancy Drew season 2, episode 7, it made the episode more fun and human.

Ace’s flirtationship with Amanda Bobbsey is interesting, as it seemed like the writers were really headed toward romance with Nancy and Ace in the near future. Perhaps this will stir some feelings within the both of them and lead to something more, or maybe this is just where Ace’s love life is now headed. Personally, I think that would be great too.

If you’d asked me a few episodes ago, I would’ve said I don’t want to see Nancy and Ace together romantically. I still prefer them as good friends, but Ace is really the only one who treats Nancy right. So I’m down if it’s handled well and doesn’t increase the tension in the group that we’re already getting too much of with Nick and George’s relationship.

All in all, this was a wonderful episode that has me excited to see more of the growth that each of the characters are undergoing on a personal level. The Drew Crew could come out of the season fairly different (in a good way).

Nancy Drew continues Wednesdays at 9 p.m. ET on The CW! Keep checking back for news, reviews, and (sometimes) previews!

‘Falcon and the Winter Soldier’ finale review: A new beginning

Our Falcon and the Winter soldier finale review discusses the events of “One World, One People,” and its repercussions on the MCU.