We use cookies to ensure that we give you the best experience on Hypable. If you continue to visit us, we will assume that you are happy with it.
1:38 pm EDT, April 29, 2021

Nancy, Ace, and Amanda team up to investigate an incident for Carson, unexpectedly stumbling onto a larger (and supernatural) mystery involving a teenage girl on Nancy Drew season 2, episode 13, the show’s best episode of late.

Nancy Drew season 2, episode 13 delivers yet another mystery-of-the-week episode, as a girl named Birdie takes our characters on an interesting and fiery ride.

Meanwhile, George and Odette come to blows as George grows tired of the changes Odette is making to her life (and, notably, her wardrobe), which ends rather unexpectedly. 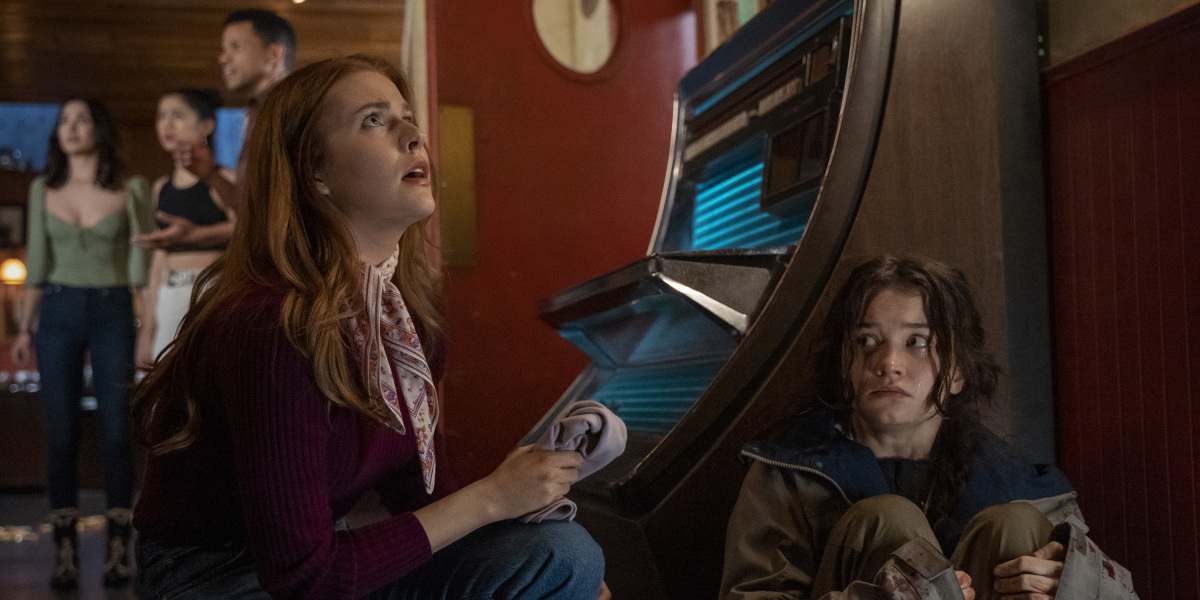 In an effort to be a little more positive, I enjoyed Nancy Drew season 2, episode 13 more than I have other episodes recently. I’m still missing some of the aspects of the show that were lost after last season, but the mystery of Birdie and the Fire Souls was actually quite interesting with a rather devastatingly shocking ending.

Birdie brought out a different side of Nancy, which was enjoyable to watch. The two could relate to each other on so many levels, particularly with the trauma of their past, and it was eye-opening to watch Nancy see herself in this young girl.

This really shows how Nancy could be a completely different person if any part of her past was timed differently, and Kennedy McMann (as always) did a wonderful job of portraying Nancy’s internal struggle about what to do with the Hudsons. 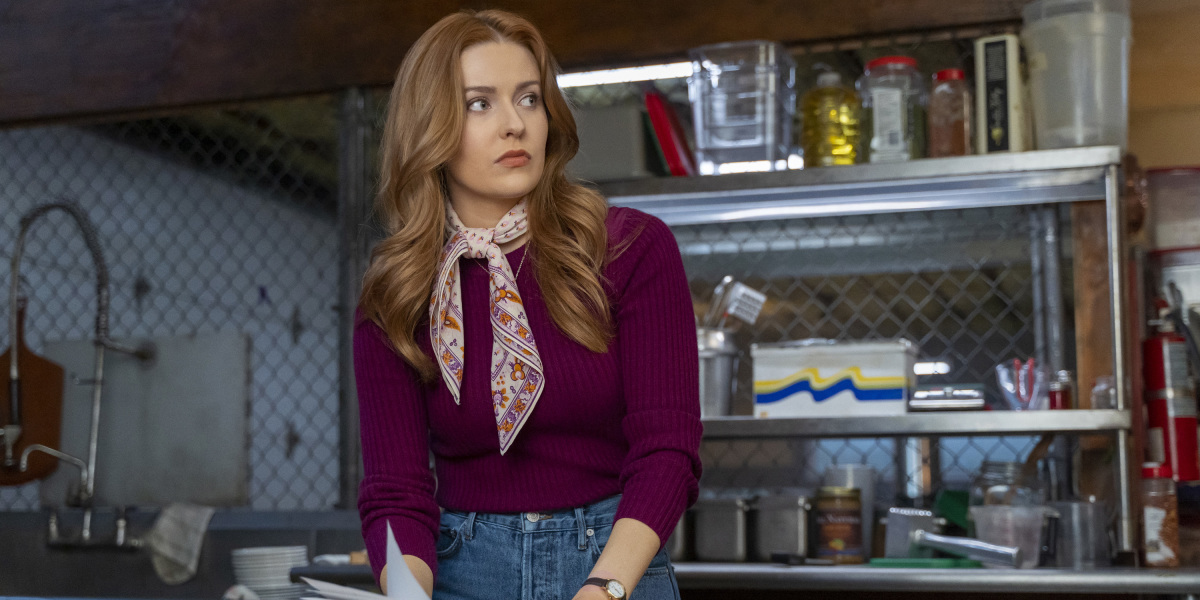 As for the mystery of Nancy Drew season 2, episode 13 itself, I wasn’t expecting the twist ending with Birdie’s uncle, Frank, being behind the accident that killed both of her parents. It’s certainly a heartbreaking ending for this girl, whose life has already been hard enough, but now she gets to pick up the pieces and move forward with her grandmother. (Almost just like Nancy and Carson’s situation.)

This mystery and the twists involved are the perfect example of the potential that is being wasted on this show. There’s capacity for a huge, eventful mystery, like Dead Lucy’s last season, to be explored for numerous episodes… but it’s being wasted on new mysteries every week that don’t get a chance to develop whatsoever.

It’s such a shame that the storytelling has devolved to only this type of episode, week after week, since the Aglaeca mess was over. It’s not really adding anything to the show to do this; in fact, I’d say it’s doing the opposite and taking away from the characters having as much space to breathe and develop lasting relationships of any kind. 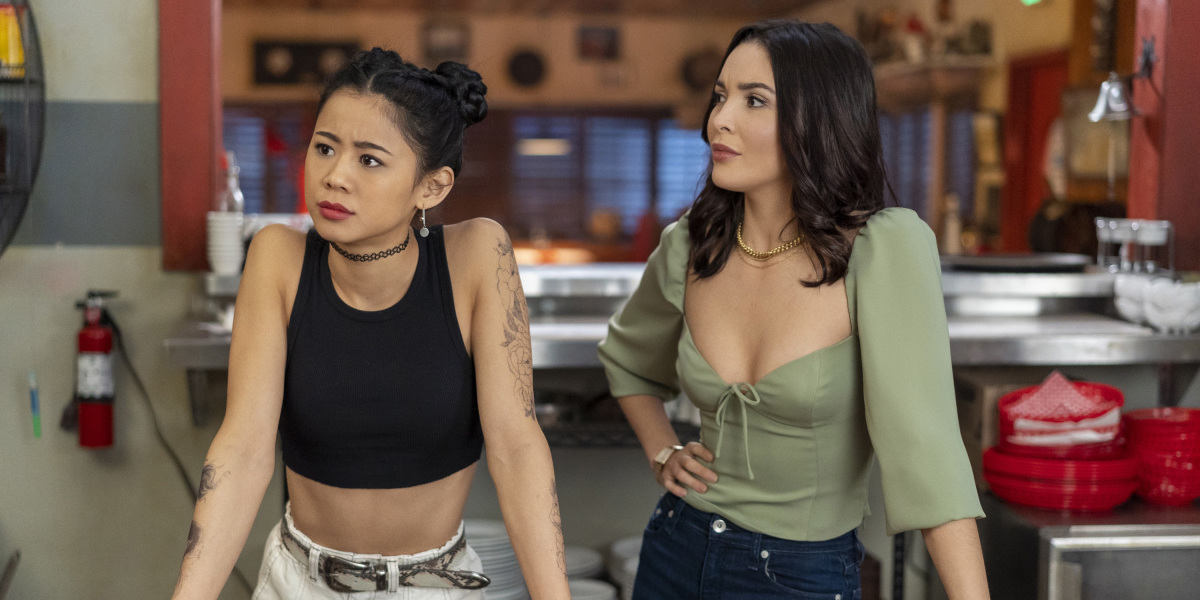 After all of this time, I’m still not down with this story, which is problematic in varying ways. As I discussed in my review of an earlier episode, consent on Odette’s behalf is a big issue that is not being addressed. Nancy Drew season 2, episode 13 doesn’t ease those qualms.

To start, I will say that I am enjoying this story simply from the perspective of George and Odette sharing a body. It’s heartening to see the various ways that Odette is using her time in George’s body, like helping George’s sisters and developing relationships with them. That was entirely unexpected when this first started.

George and Odette getting a better understanding of one another through this twist of fate is intriguing, and it’s nice to watch this weird relationship between them develop.

However, the issue that taints this entire story is the relationship aspect. Odette didn’t ask to be tied to George’s spirit either, yet is being treated like an invader and has no say over what happens to what is, technically, her body right now, too. It’s a messy, complicated issue that is being completely glossed over, which is disappointing and a little gross.

Nick and George’s relationship has carried on like almost nothing has happened, which is uncomfortable to watch considering there is a lesbian being forced to take part in every aspect of that relationship (because while George has no recollection of what Odette does, the reverse does not hold true). 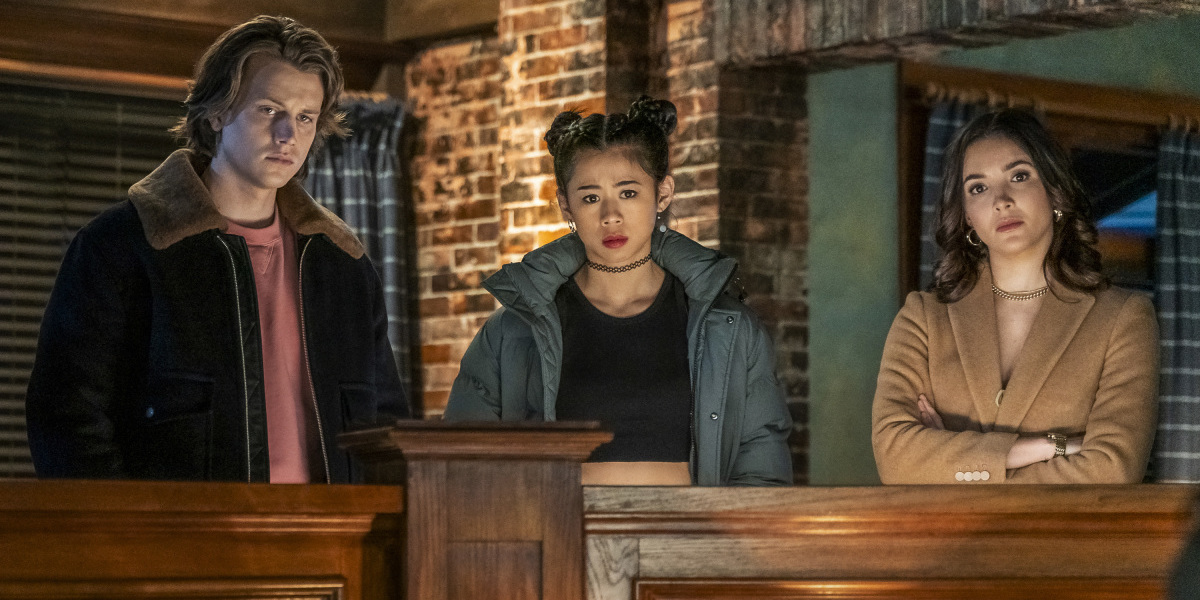 And for Odette and Bess, the entire situation is being handled strangely. While they agreed to be “just friends” on Nancy Drew season 2, episode 13, that was quickly followed by a moment that insinuated those two cannot just be friendly. However, the issue of consent is brought up, kind of, in this capacity and George has full control and is shaming Bess for developing feelings for Odette. Yikes.

What really bothered me on this episode, though, is how George basically said that Nick better not ever find out about Bess and Odette’s feelings for one another.

Whether that be because of her own relationship, because he’ll be angry at Bess, or some other reason, why is it any of Nick’s business It’s George’s body, not Nick’s, and she’s in charge of finding out what will be successful for her and Odette to live life to the fullest extent. It’s not his place.

But isn’t George tired of lying to Nick all of the time? Since this Odette thing started, it seems like she’s always hiding something from Nick, so this picture we’re actively told to see in every single episode of them being the perfect couple and soulmates never feels realistic.

In short, this story needs to end because it’s just too complicated and not being handled properly for the complex and nuanced issues it should, but is not addressing. 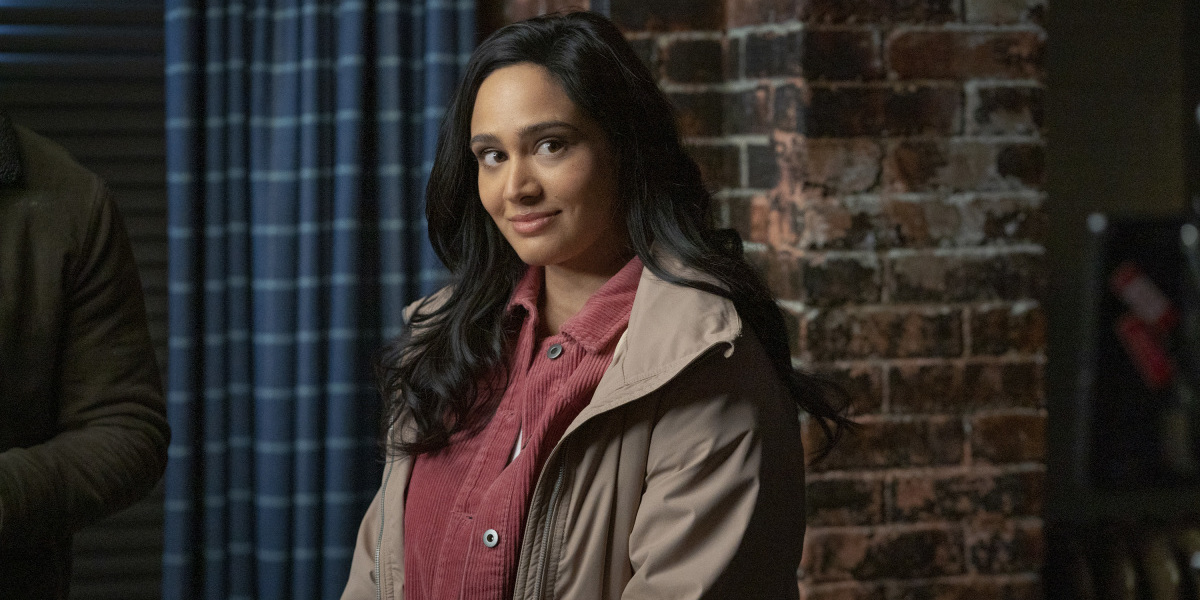 Honestly, I wish the show would calm down on the romances this season. Everything else has fallen to the wayside, including the friendships that made this show so special last season. Nancy Drew season 2, episode 13 is no different with Nancy and Ace’s relationships with the Bobbsey twins and each other further explored.

I don’t particularly enjoy that two people of color are the plot devices as Nancy and Ace delve into their feelings for one another. It feels wrong on so many levels. It’s also frustrating that Gil is being made into an antagonist out of nowhere when his relationship with Amanda seemed so different in the season premiere.

At this point, I like Amanda more than most of the characters on this show and do not want to sit around waiting for Ace to break her heart. I expect that Nancy will end things with Gil when she realizes how controlling he is, while Ace and Amanda will continue on until she sees his feelings for Nancy are strong and departs for her European adventure. So what’s the point of exploring these couples if they are, already, so clearly on the journey to the end?

Nancy and Ace only got with the Bobbsey twins after it was clear they had unexplored feelings for each other, so the twins are essentially being used. Let me be clear: I have no issue with Nancy and Ace as a couple. In fact, it might be very successful when it is explored, but starting it out like this is just not acceptable. 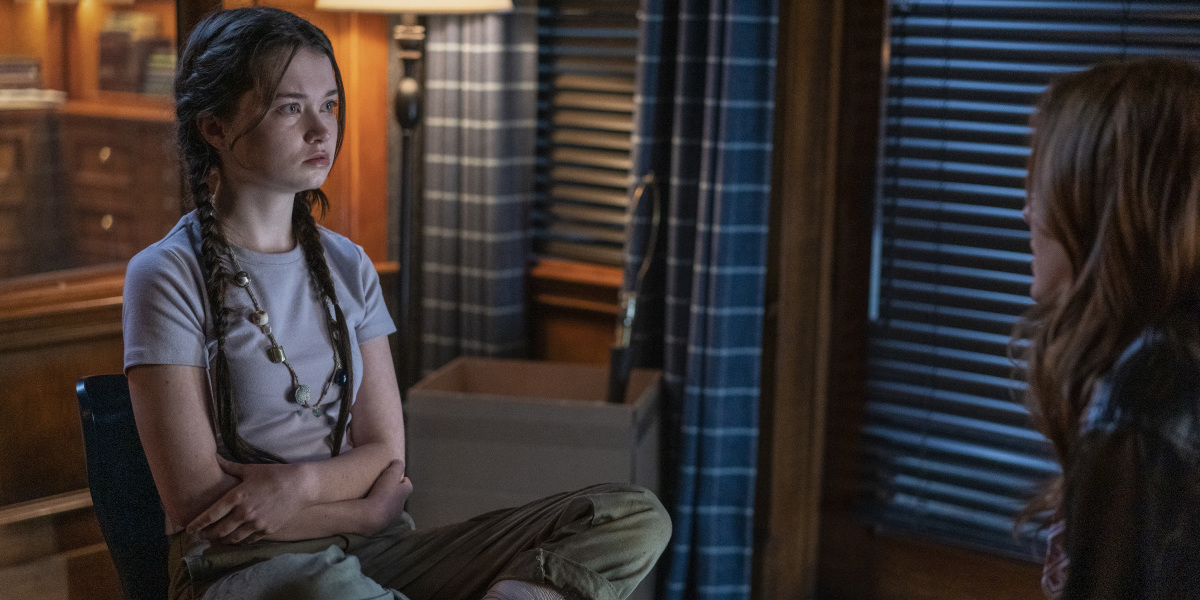 As for the final moments of Nancy Drew season 2, episode 13, it’s laughable that, of all people, Nick called Ryan to rat on Nancy having second thoughts about Celia. I get wanting to take down the Hudsons, and Nancy’s still set to do that with the exception of Celia, but all Ryan does is mess everything up. Nick should’ve called Carson instead, at least.

No one seems to make any effort to understand the trauma that Nancy has endured, particularly when it comes to her family. Whether or not Celia can be redeemed like the Fire Souls were remains to be seen, but it’s completely understandable why Nancy is so desperate to have a relationship with her. She has two fathers, but has lost both of her mothers.

She desperately wants someone to fill that void, and after she bonded with Celia without their memories, it seems more feasible now. She’s seen hope for her grandmother and what their relationship could be. It’s not that hard, if anyone on this show bothered, to know where Nancy is coming from and how to support her.

But no one on this show cares enough for Nancy to consider her feelings, really (except Carson and maybe Ace, but Ace has even had moments where he joined in on everyone unreasonably bashing her).