Last week, on Loki episode 2, our titular hero came face to face with his variant. Instead of helping the TVA stop her, he leapt through a portal to join her cause.

This week, we get a good look at the variant and everything she stands for. She and Loki have great chemistry, and it was a lot of fun to see how both of them needled the other. They really are perfect foils.

This episode somehow had plenty of action, and yet, it still moved slowly. The quieter moments allowed these two characters to feel each other out to see if any sort of trust could be built between them.

The episode ends on a large cliffhanger, so we’ll have to wait until next week to see what comes of it all. 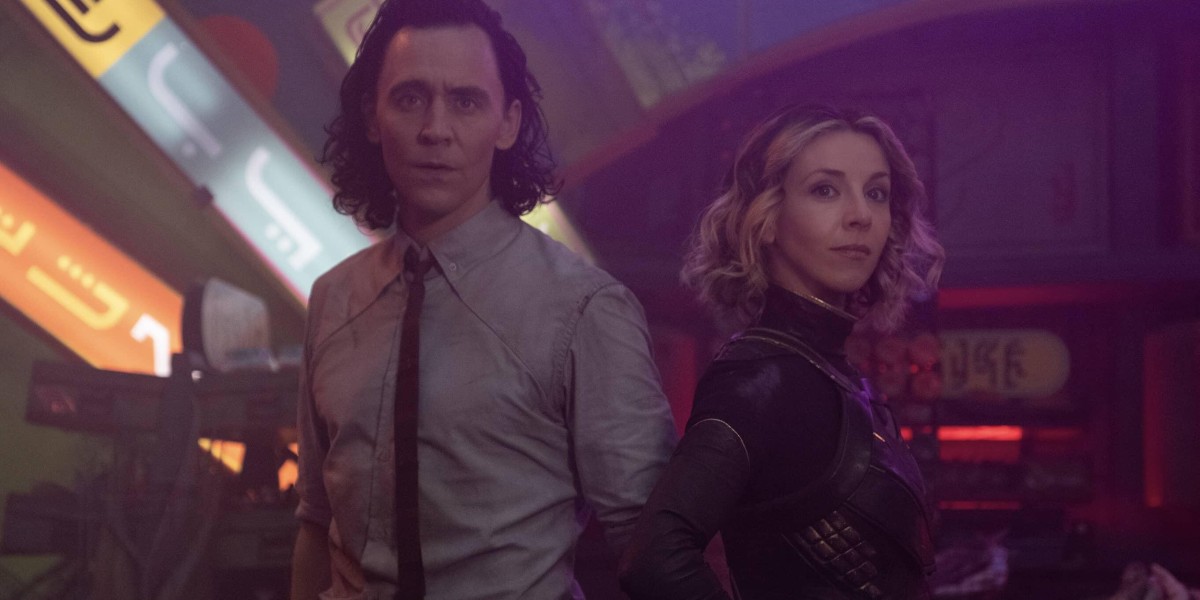 At the top of the episode, we see Variant Loki interrogating the commander from the last episode. She’s using an enchantment on C-20 to access the woman’s mind and find the location of the Time Keepers. It takes a few tries, but she’s successful—right as the TVA shows up in her apocalypse unannounced.

When the variant and our Loki jump through that door, I was expecting them to be far away from all the action. But this truly was the best distraction, wasn’t it? As troops are being mobilized, Variant Loki takes this time to infiltrate TVA headquarters while chaos ensues.

I wouldn’t be living up to expectations for my Loki episode 3 review if I didn’t talk about how much I loved watching Sophia di Martino kick ass on screen. She takes out the minute-men left and right, and prunes them without hesitation or remorse. She has a job to do, and no one is going to stand in her way.

Well, almost no one.

All the while this is happening, our Loki chases his variant down, politely (and sometimes threateningly) asking her why they’re not on the same side. They square off a few times, each one getting the upperhand at one point or another. But when it comes down to it, they’re forced to flee from the TVA or risk getting pruned themselves.

Loki picks a random destination on the tempad, which means he ends up sending them to Lamentis-1 in the year 2077, which Variant Loki says is the worst apocalypse on the list. A moon and a planet will collide, killing everyone in sight—including them if they can’t recharge the tempad in time to leave.

Loki hides the tempad from the variant to force her to work with him, and this is where she finally introduces herself as Sylvie, an alias she’s chosen for herself. Loki struggles with the idea that she’d walk away from a power vacuum after the TVA is destroyed. All she says is she’s not like him, and by the episode’s end, we still don’t know her true intentions.

The pair find out that there’s an ark full of people heading off-planet in order to escape certain doom. It would be the perfect place to find a power source large enough to recharge the tempad, so they sneak onto the train heading for the ark and try to lay low.

But Loki isn’t exactly good at doing that. What ensues is a wonderful scene full of new information where we get to see a different side of Loki. Sylvie is still buttoned up pretty tightly, but we get a glimpse at a softer side from her, as well. This is the kind of scene you look forward to breaking down in a Loki episode 3 review.

Loki says he was adopted, and then quickly asks if he spoiled Sylvie on her own life. But no, she knew she was adopted because her parents told her (this fact adequately annoys Loki). They then talk about their moms, and it definitely gives me “your mom’s name is Martha, too?” vibes.

But while Sylvie hardly remembers her mother at this point, Loki is reminiscent of his own. He’s always thought fondly of her, and even shares a story about some of the magic she taught him. Frigga never fails to draw out the best in Loki, and I love that she will forever have impacted his life.

The pair then shift into talking about love. It seems they both don’t have much time for it, and both of them are bitter about the impracticality of it all. Loki likens it to an imaginary dagger; one which can be wielded both up close and far away, and one which will inevitably disappear.

“Must’ve been would-be princesses or, perhaps, another prince,” Sylvie speculates. “A bit of both,” Loki responds. “I suspect the same of you.”

And with that, Disney and Marvel have confirmed that within the MCU, Loki is bisexual. It seems likely that all of his variants are too, but at the very least, Sylvie doesn’t disagree with his assessment.

Thanks to the end credits, we know Loki is also genderfluid, but it’s nice to get an on-screen conversation that solidifies him as bisexual. While this is a wonderful first step and something I am eternally grateful for, I hope we will see Loki act on his bisexual feelings on screen down the line. It’s one thing to say it out loud; it’s an entirely different thing to see it played out as part of a story arc. (P.S. See what Executive Producer and Director Kate Herron has to say about Loki’s bisexuality.)

For now, however, that’s not in the cards. While Sylvie sleeps, Loki gets drunk and starts singing (oh boy, I didn’t know how much I needed this until Disney handed it to us on a silver platter). He even shouts, “Another!” and smashes his cup on the ground.

Unfortunately, he’s caused too much ruckus, and after a quick fight, he gets tossed out the train window. Sylvie is forced to follow, and when they land, Loki reveals he broke the tempad in the process.

Loki suggests they try to save the ark in order to escape, and on the way, he tries to get Sylvie to reveal how she enchants people. This is when we learn that all the people who work at the TVA were once human, and none of them know they’re variants. Does this include Mobius and Renslayer, or are they exceptions to the rule?

I have a feeling this information could be enough for Mobius to rethink his alliance to the Time Keepers. 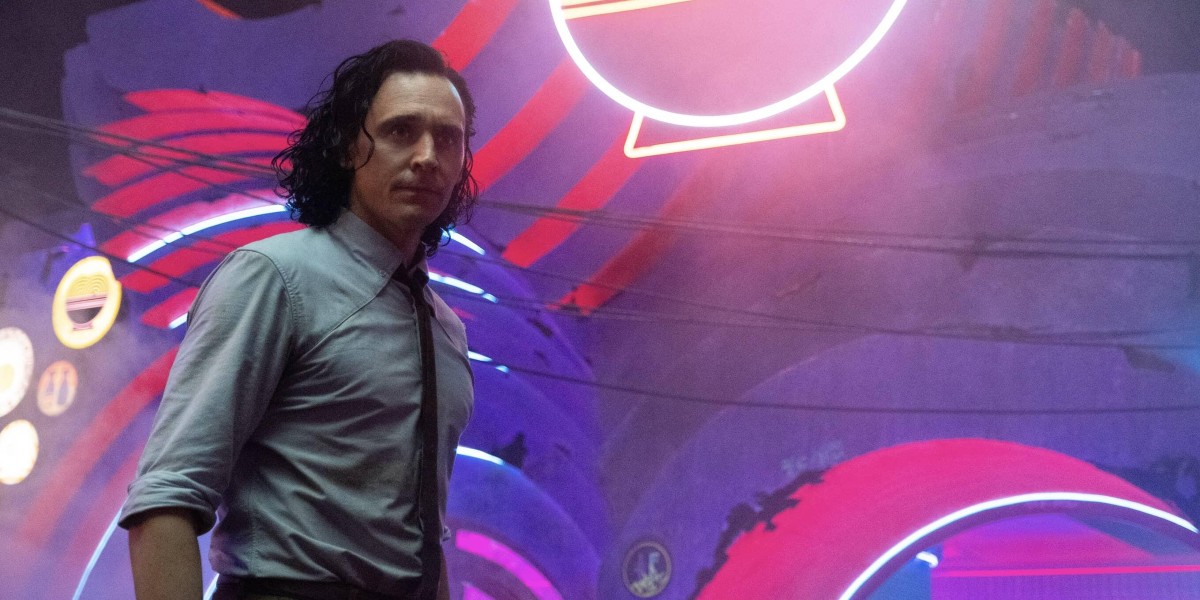 Loki and Sylvie make it to the foot of the arc, fighting their way through the crowd and against several officers. But before they can hijack their only way off the planet, a huge chunk of the moon hits it and the entire thing blows up. Sylvie walks away, defeated.

It seems like Loki is at the end of his rope here, but we know there are three more episodes left in the season, which means there’s got to be a way out of this mess. So, let’s take a minute out of this Loki episode 3 review to do some speculating.

My first thought is that the tempad isn’t actually destroyed. Loki might have tricked Sylvie into thinking it was so she’d be desperate enough to reveal more information about herself, her plan, or what she knows about the Time Keepers.

But even if that’s the case, the tempad will still need to be recharged, and their one hope for that just blew up in their faces.

The TVA won’t know what apocalypse Loki will have gone to, so it seems unlikely that Mobius will rescue them unless they can somehow send a message to the TVA in time. If this is the case, then they’re on their own.

Loki and Sylvie are both incredibly intelligent people, so I wouldn’t be surprised if they found some roundabout way to survive the apocalypse. Loki also seemed quite careless in this episode, and while I think he’s an agent of chaos and loves feeding into his frivolity, he’s also a survivor. Would he really have been so irresponsible this entire time, knowing it could be the end of him?

My last thought is that Sylvie and Loki are still in that mining cabin at the beginning of the episode. Loki believes his mind was too strong for Sylvie to enchant him, but this wouldn’t be the first time his arrogance got in the way of reality. Perhaps she’s still trying to get the real tempad out of him.

Hopefully we’ll find out the truth of the matter next week, on Loki episode 4.

Do you agree with our ‘Loki’ episode 3 review?