The magic is back and better than ever in Square Enix’s masterpiece RPG title Kingdom Hearts 3.

The Kingdom Hearts games have deviated from the path as of late. They’ve introduced complicated story elements, one too many masked villains, and most importantly, none of them were Kingdom Hearts 3.

If you played Kingdom Hearts 2 back when it was released in 2005, you’ve done nearly a decade and a half of waiting for KH3. Thankfully, if you kept up with all of the spin-off titles throughout the years, you’ve been rewarded massively in what is the most cohesive and fun Kingdom Hearts games I’ve ever played (spoiler free).

Ironing out some plot points

The Kingdom Hearts games were in desperate need of some sort of spice to get the story up to par. That exact spice is a tried and true trope: lampshading.

I won’t discuss anything that was lampshaded or who said what, but there was just the right amount of this storytelling device to let the player know that yeah, there were many missteps in the Kingdom Hearts games, but KH3 was going to defy all odds to get everything done right. 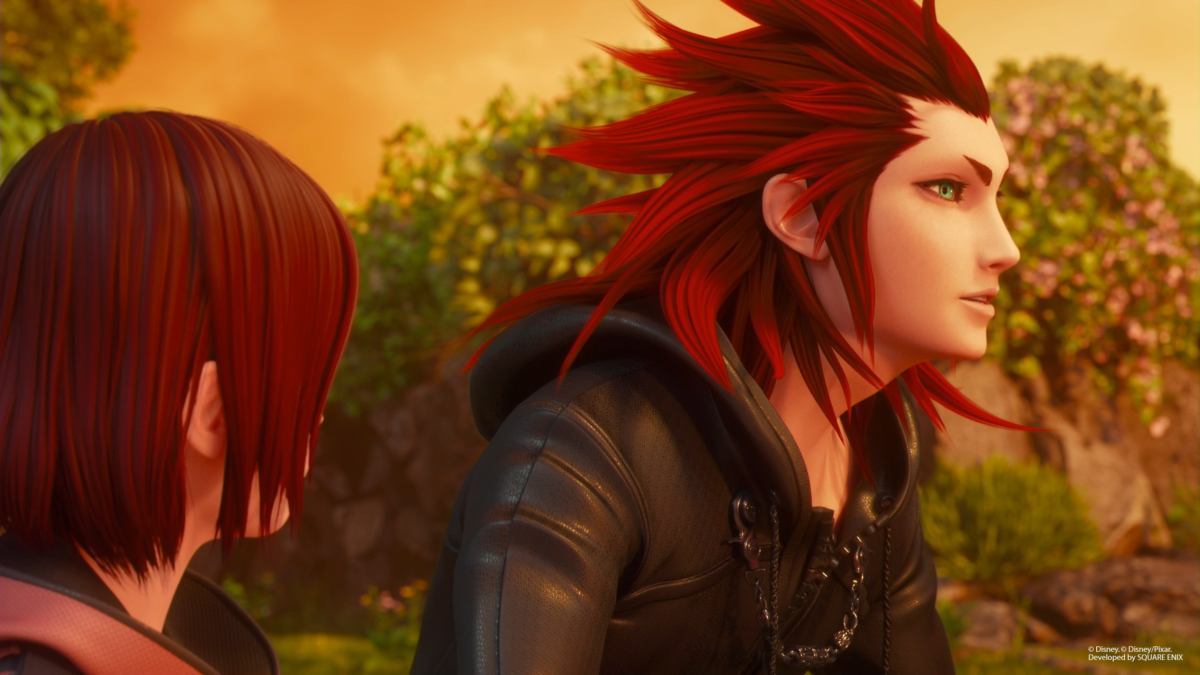 There is nary a single plot point from any of the now nine main-series Kingdom Hearts games that I’m still frustrated about. There was nothing hamfisted, and you understood exactly what sort of bow the story was tying up the second it was happening. This sort of cleanup may have taken away from the drive of any other series’ plot, but for Kingdom Hearts 3, it’s the sort of beautiful resolution that LOST could have only dreamed of.

I cried. And then cried, and cried, and cried some more. I have never ever cried at a video game’s plot or voice acting as often and as hard as I did for the entirety of Kingdom Hearts 3. From the beautiful to the nostalgic to the tragic to the heartwarming, there are so many moments that will touch your heart in KH3.

Unreal Engine + mixed art style = one and a half pints

Sorry for that bit of math there (I know, we’re all happy to leave 358/2 Days in the past). What I mean to say here is, many of the worlds and cutscenes look stunning, spectacular, and just like you’d want an HD Kingdom Hearts game to look like. Others look like hard plastic.

This dichotomy is such a drastic shift that you’ll be left scratching your head over how so many scenes ended up looking so half baked, while others looked photorealistic. I’d like to say that it comes and goes with specific worlds, but even the opening world shifts back and forth between these art styles often enough to give you whiplash. 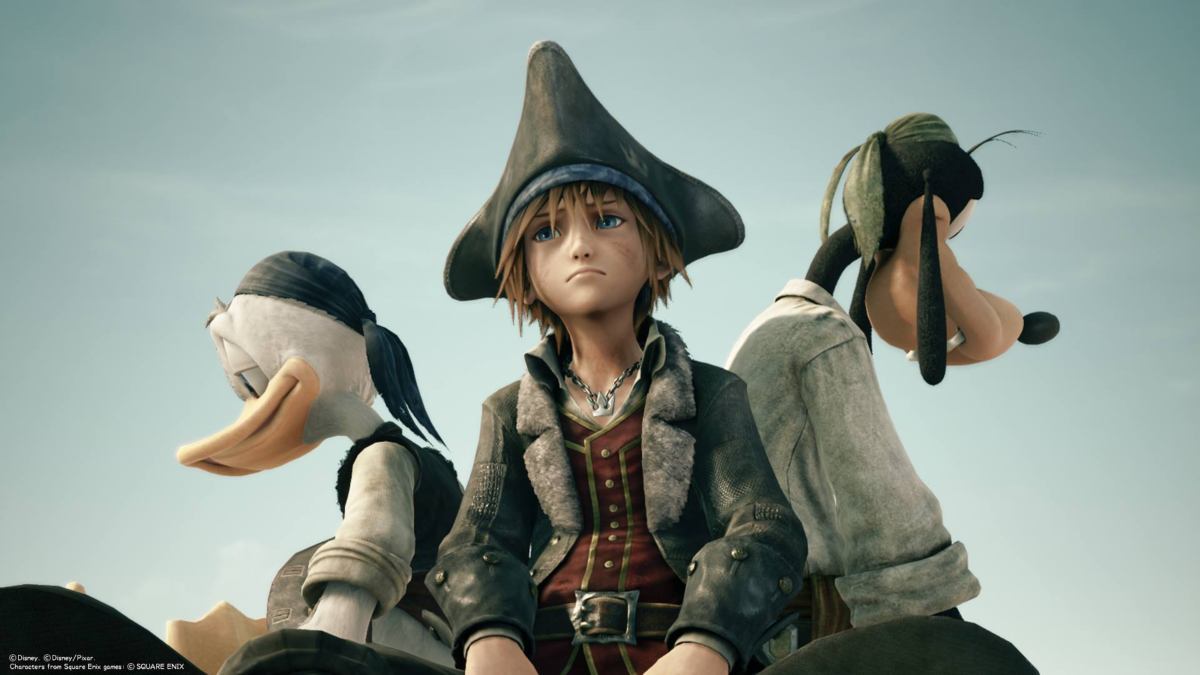 The good looks really good. Eyes, fabrics, and hair, in particular, have such wonderful qualities to themselves. It looks like the developers took the majority of development time to style. There has always been a subtle emotional quality about the ways characters emote with their eyes in the Kingdom Hearts series, and here, that’s even more important.

You’re able to read into character motivations and intentions with a slight squint, a darting glance, or the tiniest of brow furrows. This is the sort of stuff usually associated with games filmed with live-action actors, of which Kingdom Hearts 3 was not. This mastery of the muscles and twitches of the human face soar lightyears ahead of any of Square Enix’s Final Fantasy titles. 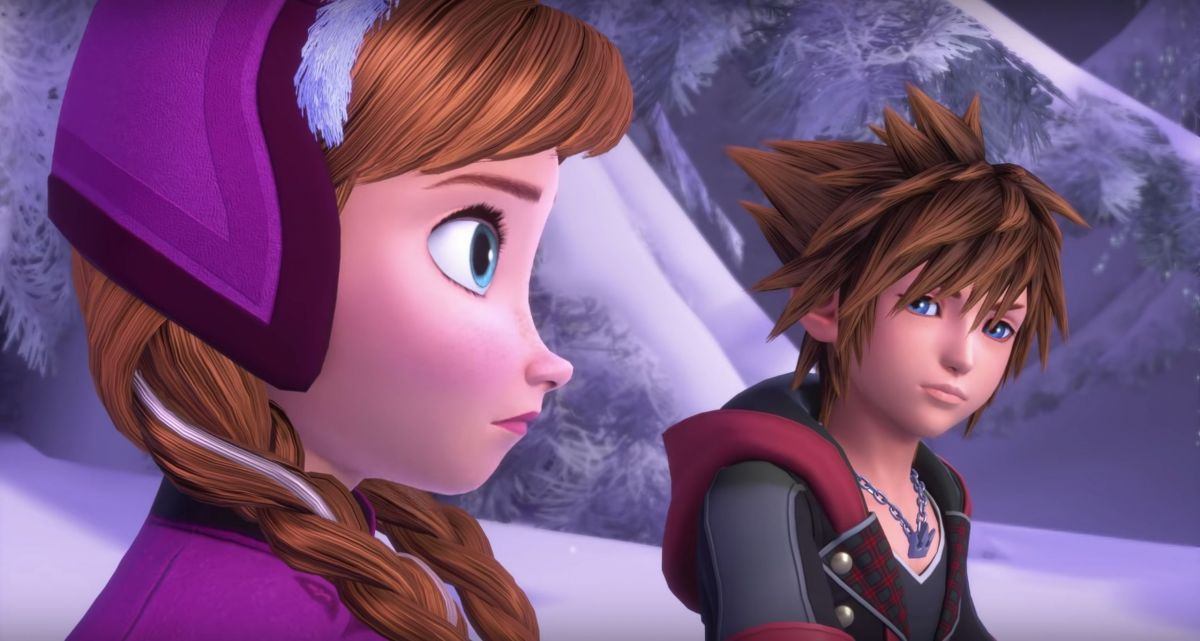 The environments, in particular, water, feel like they’re real. There was never a dull background texture, although some extended levels did start to meld into giant labyrinths, which was probably the point. Take it or leave it, Unreal Engine gave us enough wonderful moments to make up for the surprisingly elementary bits, that come the game’s conclusion, your memory will be (mostly) wiped of all weak graphical moments.

May your heart be your guiding key

Level designs are mostly amazing, with a particularly bland one souring the sweet taste in my mouth. There are only 7 main Disney worlds in this game, which includes a Pixar inclusion for the first time in series history.

The Tangled world was so beautiful. There are no words to describe the warm fuzzies I had when playing through Rapunzel’s story. The Kingdom of Corona is an absolute treat for any fan of the Disney film. 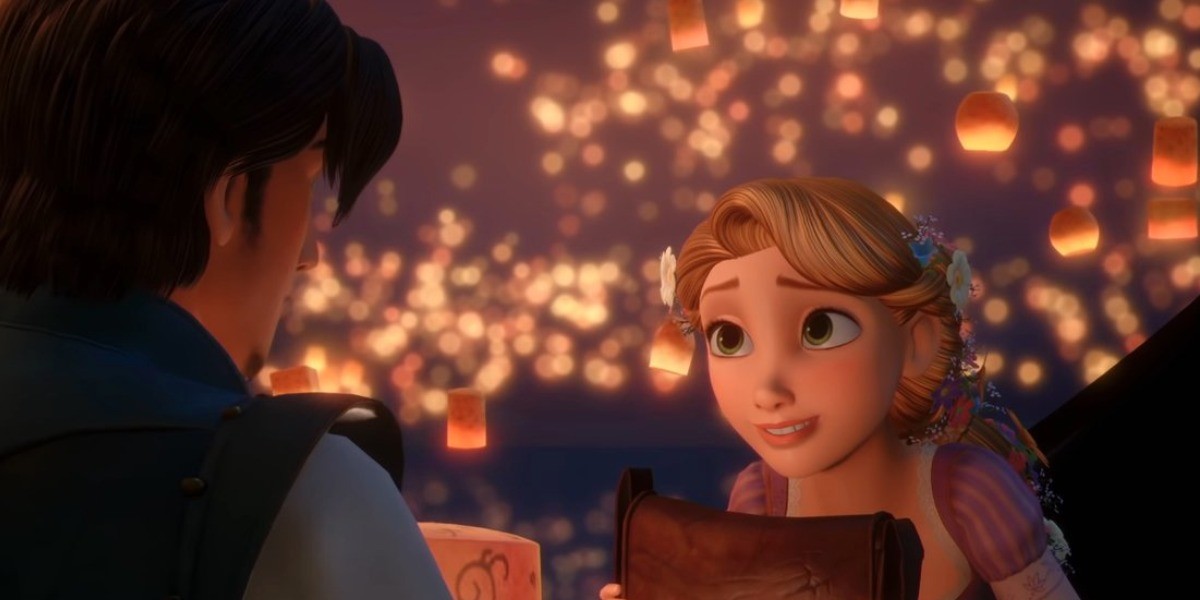 With world maps spanning double or more of what any given Kingdom Hearts world had before, it’s easy to get a bit lost from time to time. The game’s difficulty relies on this, because if the path was as clear and easy as the disappointing Monster INC.‘s, the game would easily cut five hours off of its 25 hour-long playthrough.

There is an attempt here to make both Kingdom Hearts and long dungeons work, but with a real-time battle system, it was all too tempting to glide right past optional battles. You’ll be sitting in a lot of cutscenes, and while it felt like there were more than there was in any Kingdom Hearts game before, that’s probably coming from the time and distance we’ve all experienced from the series since 2012’s Dream Drop Distance.

My friends are my power

Combat is beyond easy, perhaps even more so than Kingdom Hearts 2‘s. It’s so much fun, but only because you’re given so many overpowered combat options from the get-go so as to neutralize any potential threats. I played on Standard Mode, but felt as if I was playing on a Weenie Hut Jr. difficulty.

Team attacks are more present than they ever were before, with most of them granting you, Donald, Goofy, and other auxiliary Disney party members temporary invincibility. Every team attack is too strong, allowing you to blast through Heartless battles, and simply melt every single boss.

Attractions add more variety and splash to battles, along with making you wish you were at the real Disneyland instead of watching a cheap Big Thunder Mountain ripoff. 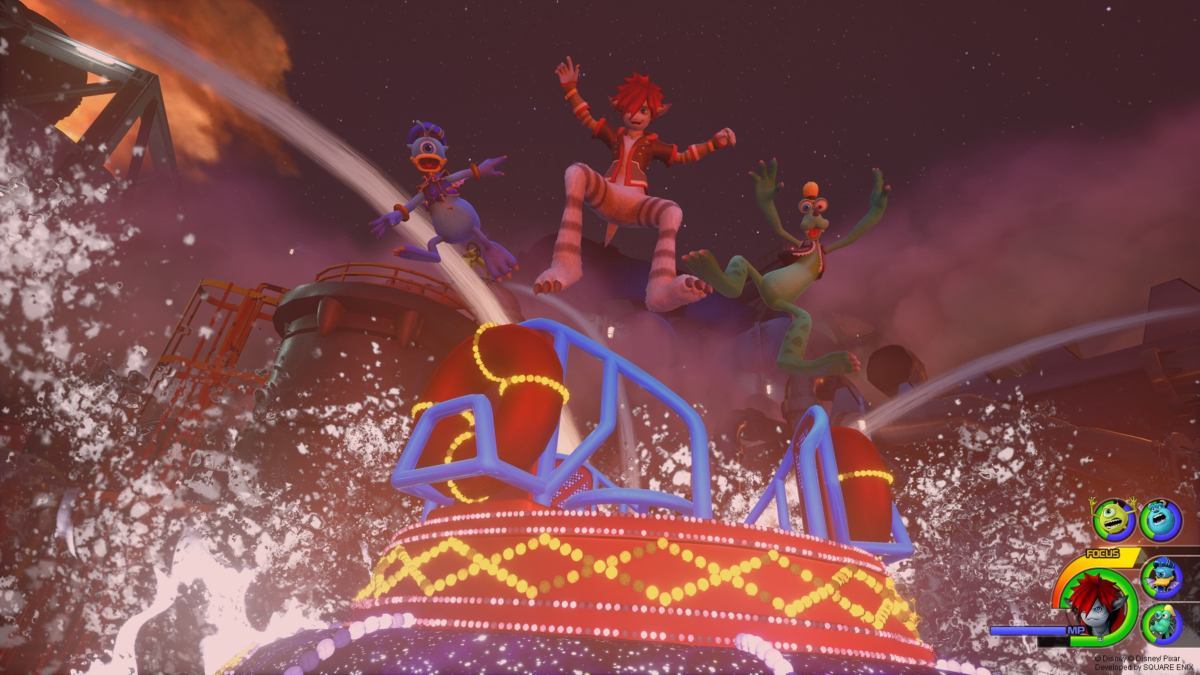 Keyblade transformations replace Kingdom Hearts 2‘s drive forms, with each world gifting you a new set of skills and ultimates based on the structure of the Keyblade’s stats. I found myself using a magic-based one for the entirety of the game, as magic is an even more OP component of Sora’s arsenal.

I did not die once throughout my Kingdom Hearts 3 playthrough, save for specific event battles in the Pirates of the Carribean level. While the dogfighting here was innocent enough, the ship battles were so clunky that Superman 64 called and asked for its cheese back. I would seriously debate whether or not I’d replay Kingdom Hearts 3 simply due to these relatively short but very miserable sailing experiences. The concept was there, it felt cute for half a second, but the execution plays out like Assassin’s Creed Odyssey nightmare fuel.

There were summons, but unless I was instructed to do so by a guidebook, I’ve never found myself calling Disney friends into battle. There was too much easily at your disposal of your quickmenu shortcuts to justify clicking through the menus to activate Wreck it Ralph or Simba.

Deep down, ‘Kingdom Hearts’ is light!

Kingdom Hearts 3 is the best game a Kingdom Hearts title could be. It takes the best elements of previous titles’ gameplay, but forgets to give players on even Proud mode a satisfying challenge.

The pretty bow is there, and it’s wrapped neatly around the end of the Xehanort saga. Some will say that the plot of Kingdom Hearts 3 was too neatly tied up, but to them, I present this question: would you have preferred to have finished the game confused, or feeling complete?

I feel complete. I’ve been playing the Kingdom Hearts games since I was a preteen, and through some extremely rose-tinted glasses, I can still say that the cracks in the armor here aren’t all that marring. Kingdom Hearts doesn’t get an easy pass in my books, and for this superfan of Sora’s adventures, heed these words: get caught up on the series and earn this ending. 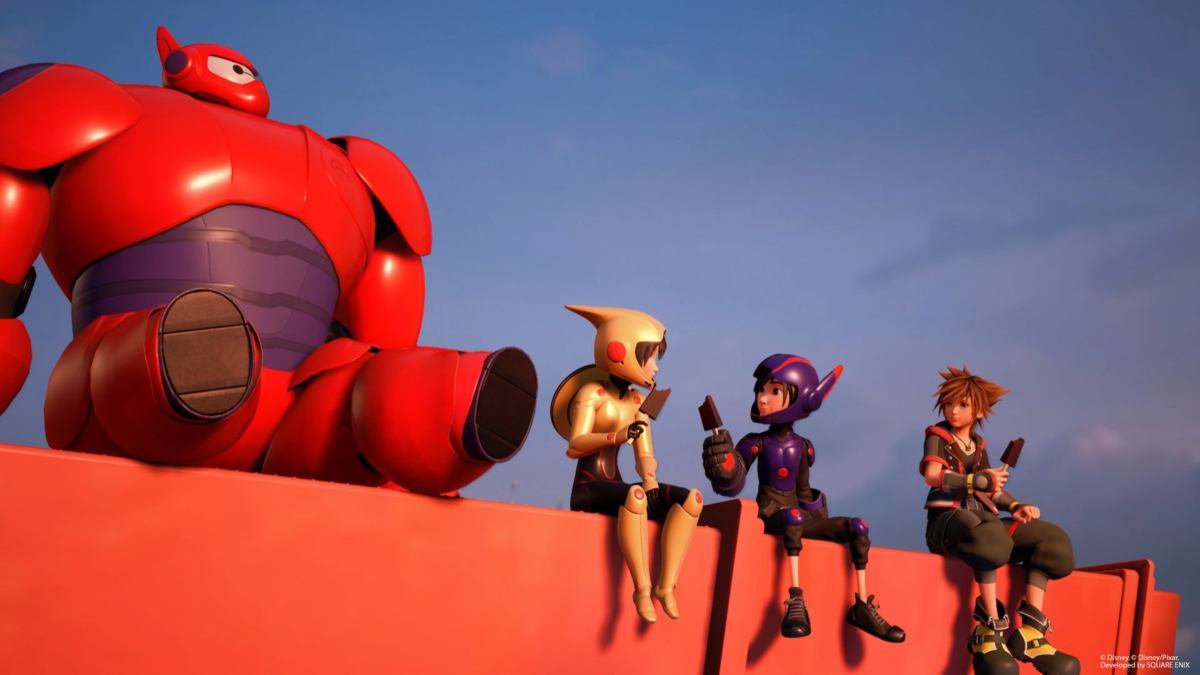 It’s deep, lore-heavy work, but Kingdom Hearts 3 is the stuff of legends. It’s been hyped and then overhyped past that, and that’s okay. It shoves in just the right amount of nostalgia to keep the tears streaming, while not forgetting that yeah, there is a Big Bad to take down.

If this is the end of the Kingdom Hearts games’ focus on Sora and co., I’d be okay with that. Sora’s had his run, and while he’s made his magic, there isn’t much story left to be told for him. Picking up the momentum of this momentous title in a Kingdom Hearts reboot would be the best thing that this epic series could do for itself.

As for now, let’s celebrate the fact that we’ve had the Harry Potter of video games wrap up so cleanly. It’s the end of an era, but I have a good feeling that Sora’s adventures will leave a lasting impression on Disney and Final Fantasy gamers of all ages.