‘I-LAND’ members: Meet the K-Pop trainees battling it out

Get ready for the next big K-Pop reality survival show by meeting the 23 I-LAND members with their profiles! (Updated with final 7 members)

Note: For update to date information on the final 7 members from I-LAND that formed ENHYPEN check out their guide here!

The goal of I-LAND is to develop and produce the perfect idol group. After three years of planning and building the structure that the trainee members live in, the show is ready to begin.

The I-LAND members consist of boys and young men from all over the world who came to compete to fulfill their dreams of becoming idols.

Learn more about I-LAND with the concept trailer:

In the finale the last batch of trainees underwent their final test. Two members were eliminated to form the final 7 members that would become ENHYPEN – 6 of which were from the fan’s global votes and finale member picked by the producers.

Daniel and K were both eliminated in the finale.

The remaining 7 trainees on part 2 that have not been eliminated are: Heeseung, Jake, Jay, Jungwon, Niki, Sunghoon, and Sunoo.

Read more about them below! 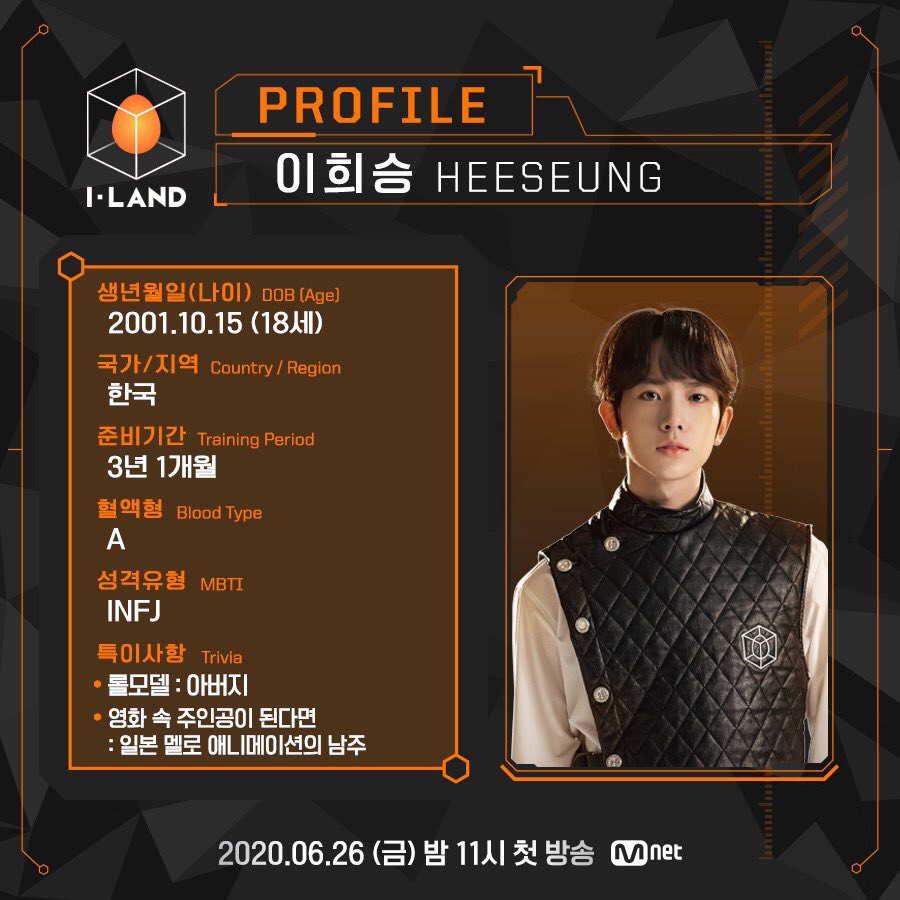 Heeseung often acted as the center for the I-LAND members during the first part of the show. He’s been a trainee for a few years already, and is close with the TXT members from his time training with them at Big Hit. He’s trained in vocals, rap, and dance.

Heeseung’s favorite sport is basketball and his soul food is Ramyeon, saying that he eats it at least three times a week. He also needs a pillow to hug while he’s sleeping. He’s said that his father is his role model.

In the first round of global voting, Heeseung ranked third with 1,006,965 votes from fans! 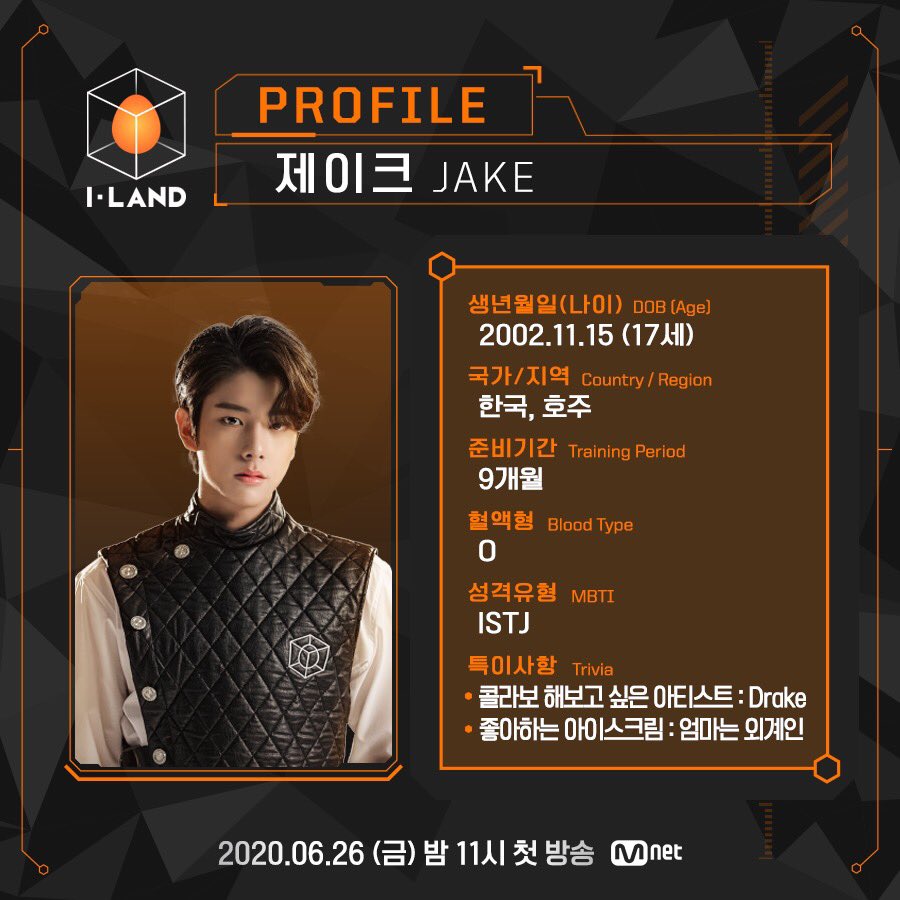 Jake didn’t really start shining on the show until they got closer to the final test for part one. He was able to help the other I-LAND members learn the dance for the final test and he was happy to see that they looked up to him and trusted his skill to ask for help then.

Jake’s favorite sport is soccer and his soul food is chicken. He’s also said that he needs a comfortable pillow in order to sleep.

He’s revealed that being away from his family in Australia for the first time has been difficult, having only arrived in South Korea the week of his audition. 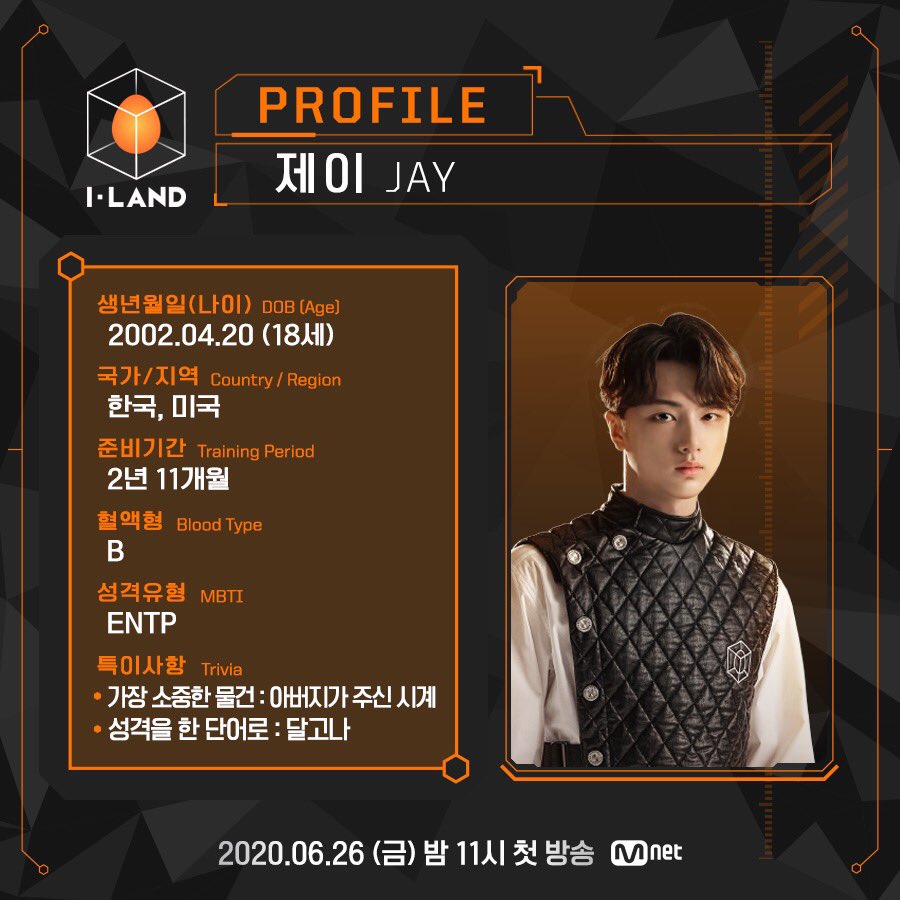 Jay is known for his dance skills among the I-LAND members, although he did face some confidence issues during the first part of the show. He’s been a trainee for a few years and is trained in rapping and dane.

Jay’s favorite sport is badminton and he’s said that his personality is really excitable, because of that people call him a puppy. Jay is also an only child in his family. 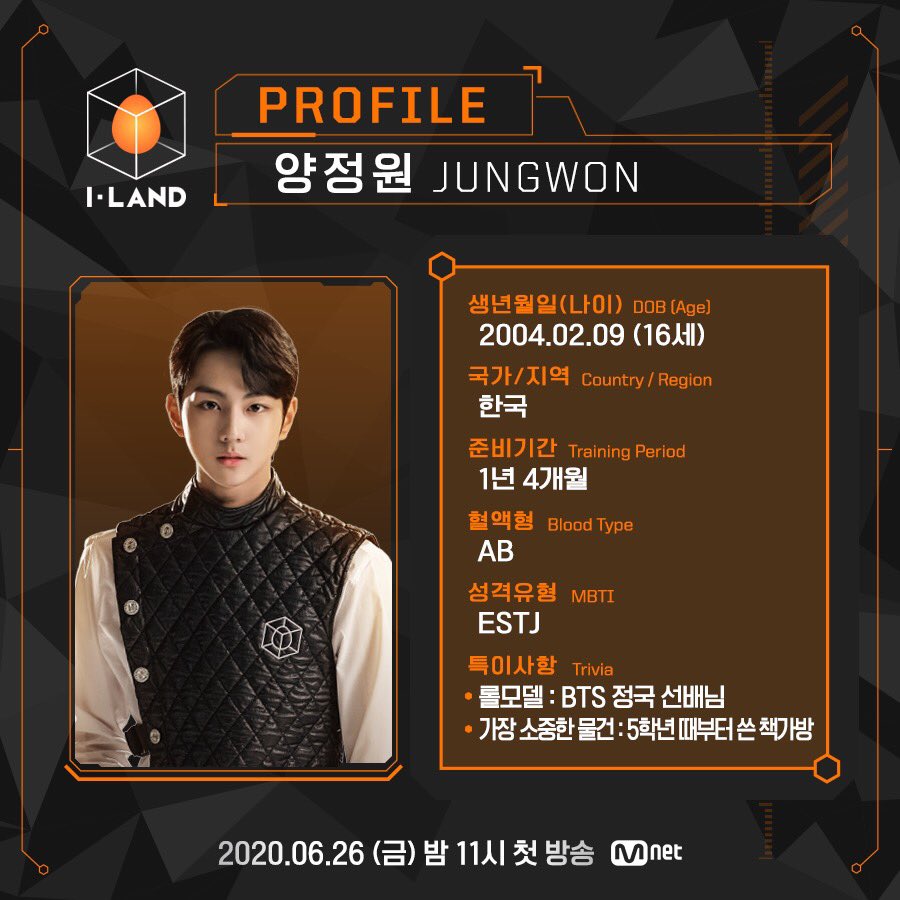 Jungwon was shown struggling a bit with dance during the first part of the show, however he displayed good teamwork with the other I-LAND members.

Jungwon said that he would compare himself to a monkey as an animal and that he wants to become and artist that performs music he loves. He’s also said that his role model is BTS member Jungkook. 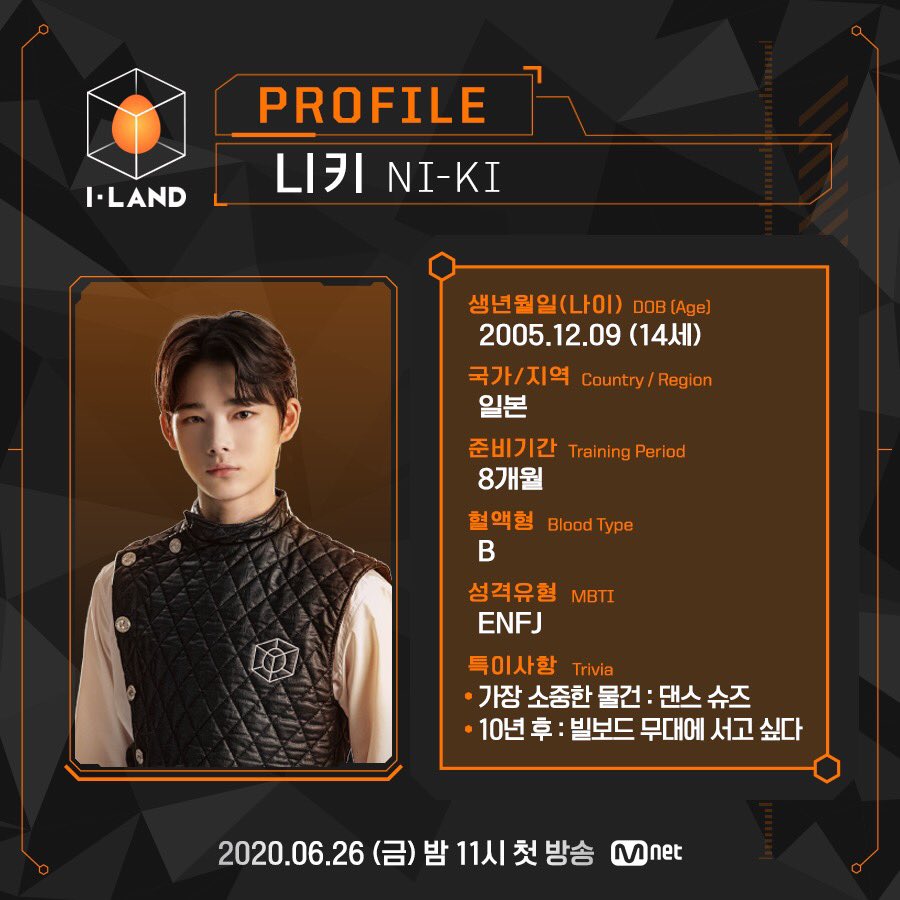 Although young in age, Ni-ki is one of the top dancers on I-LAND. He’s even said that his most precious item is a pair of dance shoes. Before becoming a trainee, Ni-ki was a backup dancer for K-Pop group SHINee.

Though he early on received some criticism from the producers for his unstable voice while dancing, they continued to look towards him as one of the better dancers to help the other trainees learn choreography for the test. 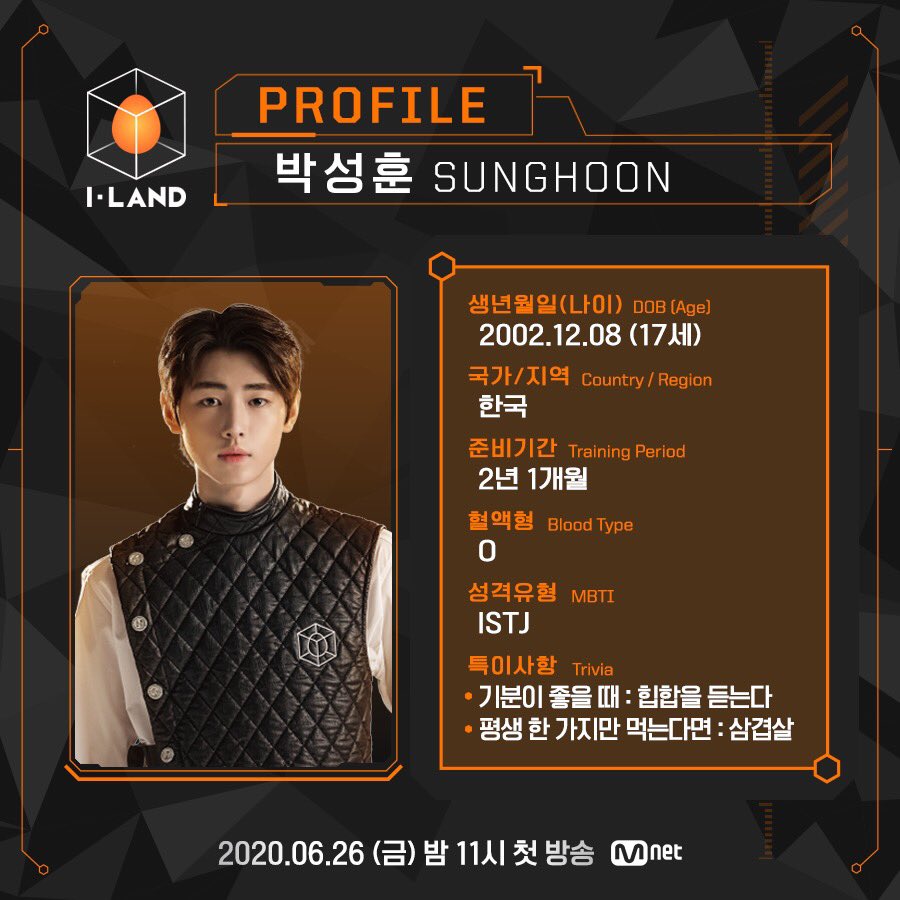 Sunghoon showed his ability to pick up choreography quickly and his background in ice skating gave him an edge over the other trainees when it came to certain moves.

Sunghoon said he would compare himself to a penguin, and also that he would describe himself as “careful.” He was formerly a competitive ice skater where he participated in national and international competitions. Sunghoon only started dreaming of becoming an idol two years prior when he first saw BTS in concert.

He has a younger sister (Park Yeji) who is five years younger than he is. 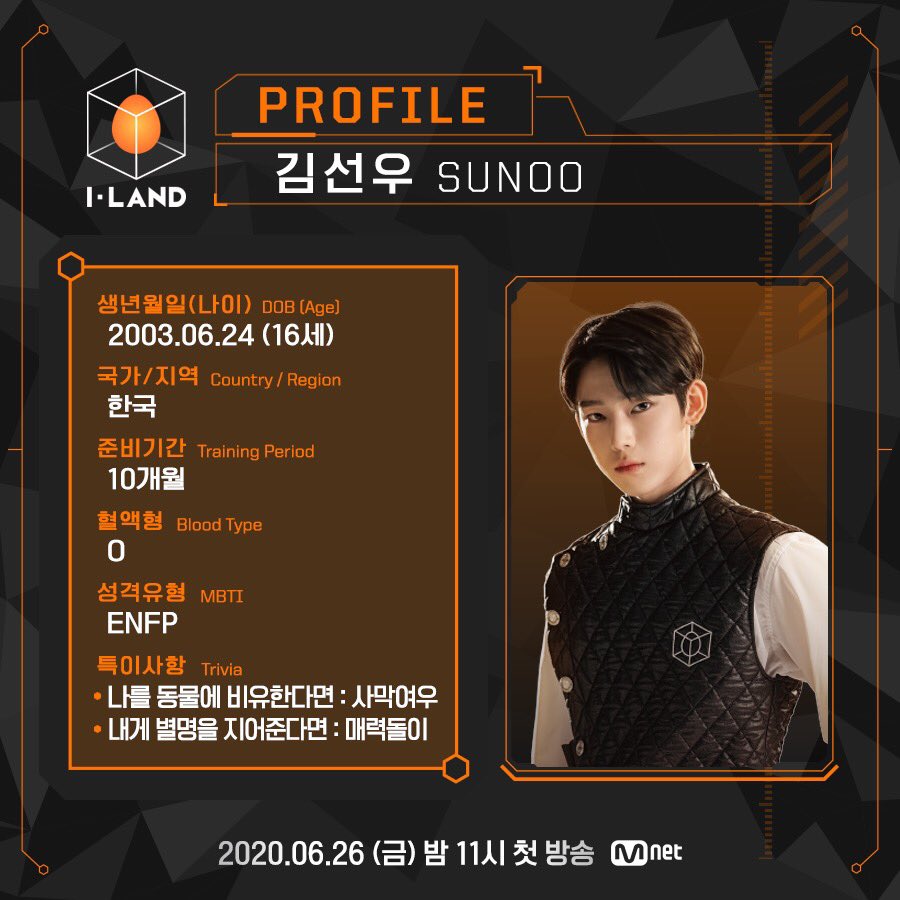 Sunoo has said that if he had to explain himself he would say that he is bright and energetic. His favorite food is tteokbokki.

He recently revealed that he’s had some health issues since he was young and had to undergo surgery, so training has been physically tough on his body. Although he hides it well and worries about being a burden to the other trainees during practices.

During the first round of global votes, Sunoo received the most votes out of all the trainees with 1,087,503 votes from fans!

Geonu became the first I-LAND member voted off the show in the second part of the series.

Ta-ki became the second I-LAND member voted off the show in the second part during episode 10.

Hanbin became the third I-LAND member voted off the show in the second part during episode 11.

Daniel and K were eliminated from I-LAND in the final episode. 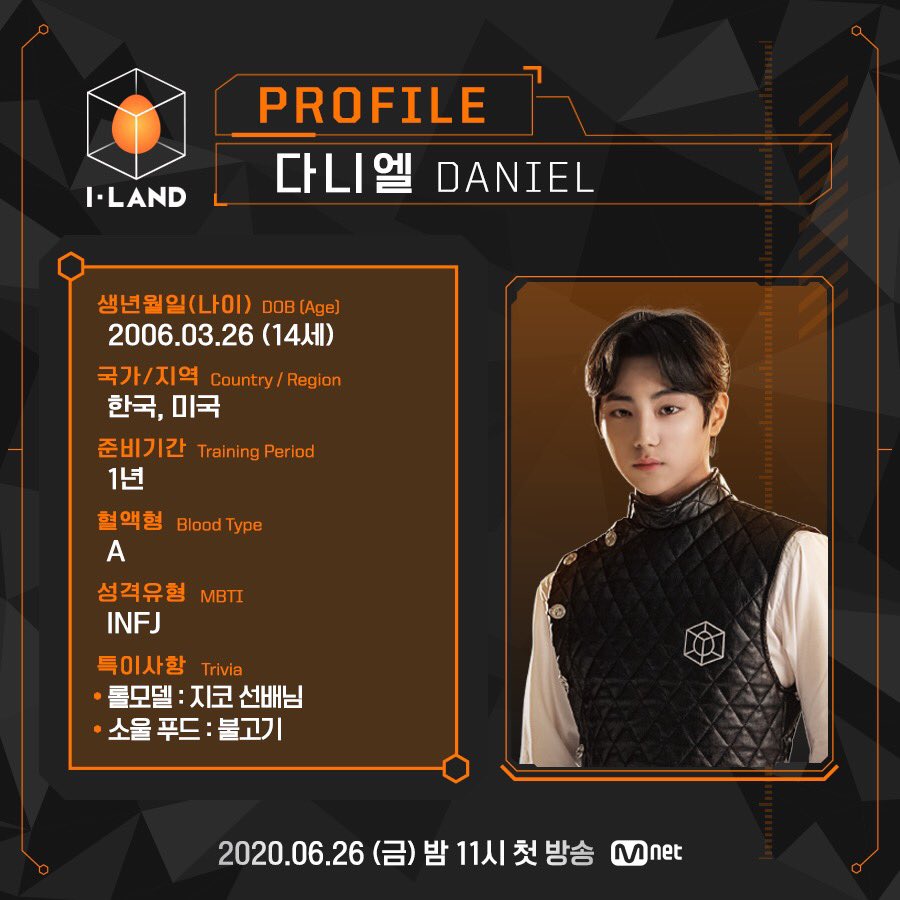 Daniel is the youngest contestant on I-LAND, though you wouldn’t be able to tell it form his mature personality. His role model is Block B’s Zico and his favorite food is bulgogi.

A true introvert – Daniel has compared himself to a deer and has also said that his biggest fear is people.

On the series so far, Daniel has proven himself to be skilled in dance and vocals, but he’s also a skilled rapper which hasn’t yet been showcased.

He came in second place in the first round of global votes receiving 1,021,269 votes from fans! 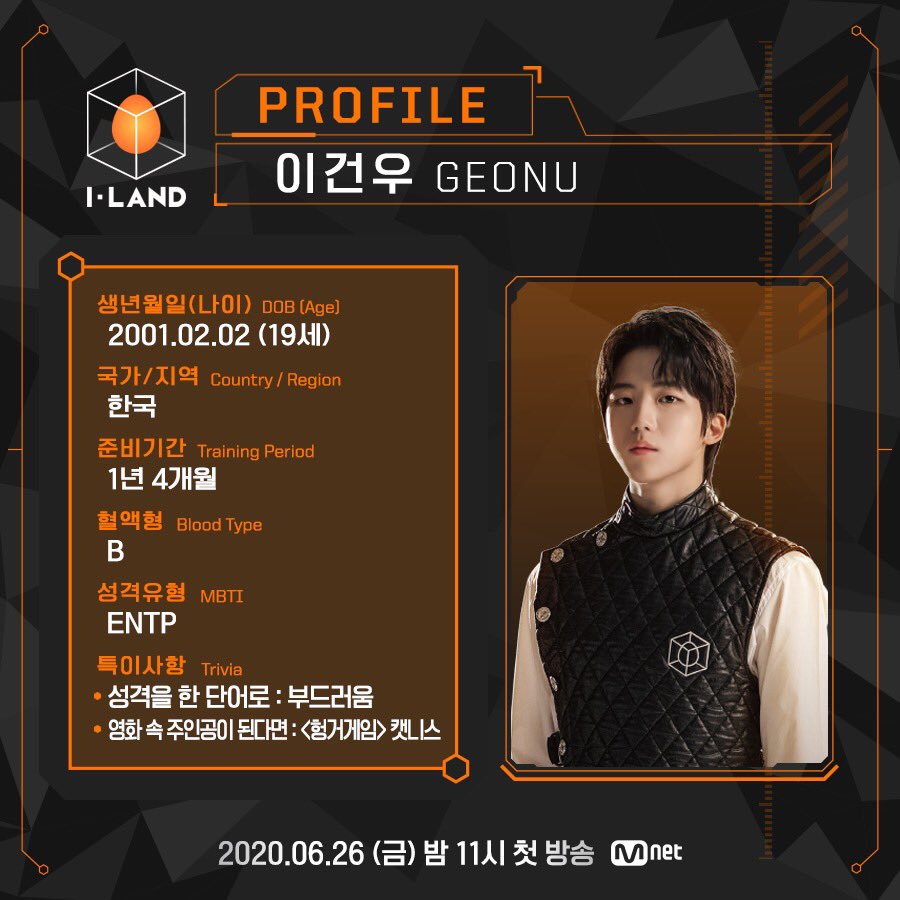 Geonu has described his own personality as being soft, and he’s definitely been one of the more quiet trainees on the show. However, he’s quite a talented vocalist as shown when he sang “Butterfly” in the showdown between the I-LAND and GROUND members in episode 5.

The trainee compared himself to a seal, and also said that he’s most scared of having bad health. 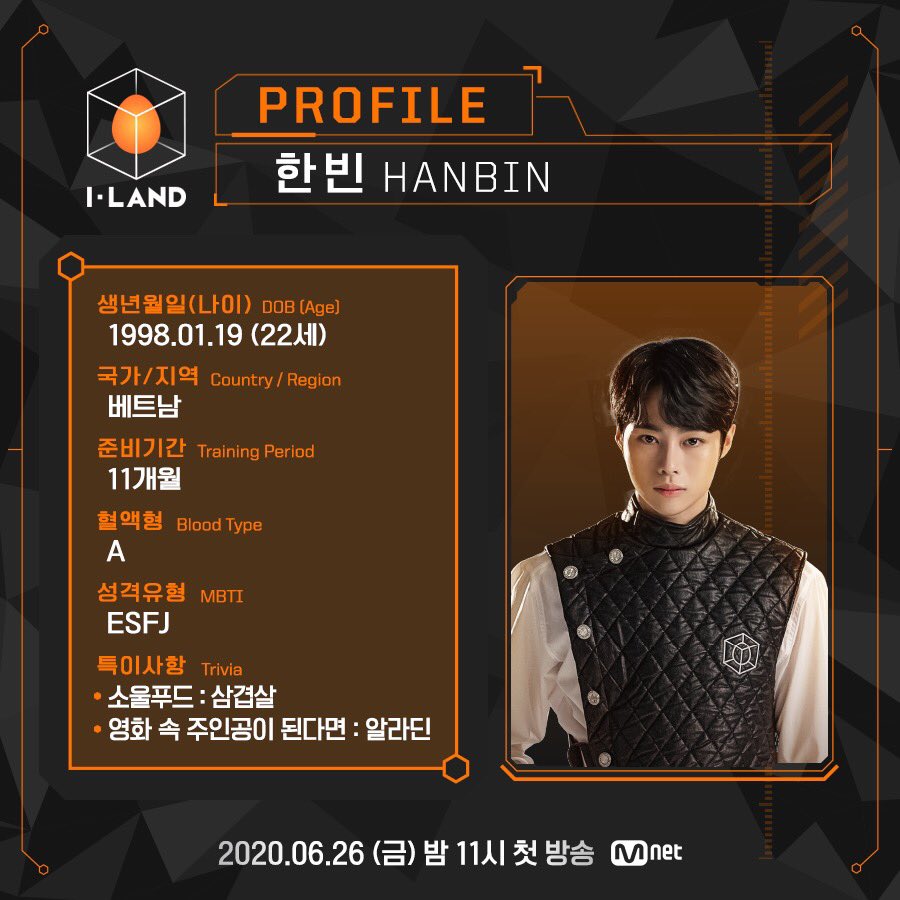 Hanbin is most known for his dance skills on the show. Back in Vietnam, he was a member of the dance crew C.A.C. He also studied Marketing at the Hanoi University of Commerce.

His favorite food is Samgyeopsal and his favorite sport to play is badminton. 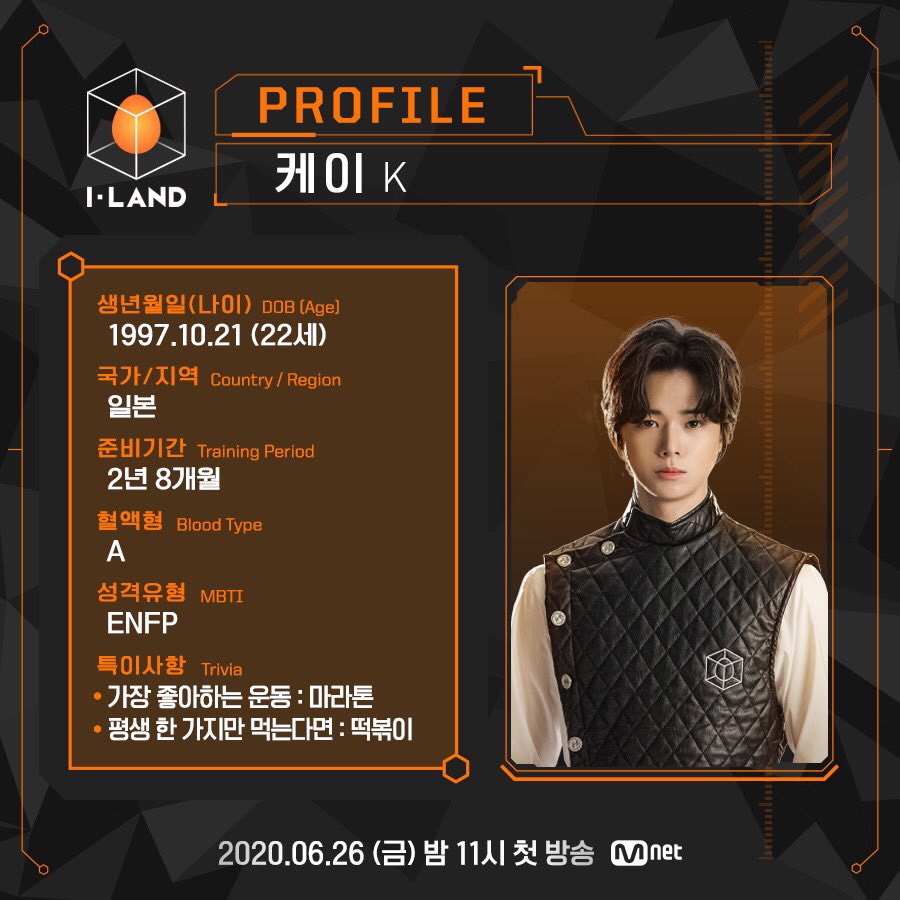 On the show, K often took on major parts for the performances and even choreographed a dance for the face-off with the GROUND members that left a lasting impression with the producers. He was seen forming a close bond with Taki who acted like his little brother, although they were often separated because of the voting.

K’s favorite sport is running, he previously trained and competed in marathons before becoming a trainee. Before bed he always has to stretch and keeps stretching mats with him. His favorite music is hip-hop and rap. 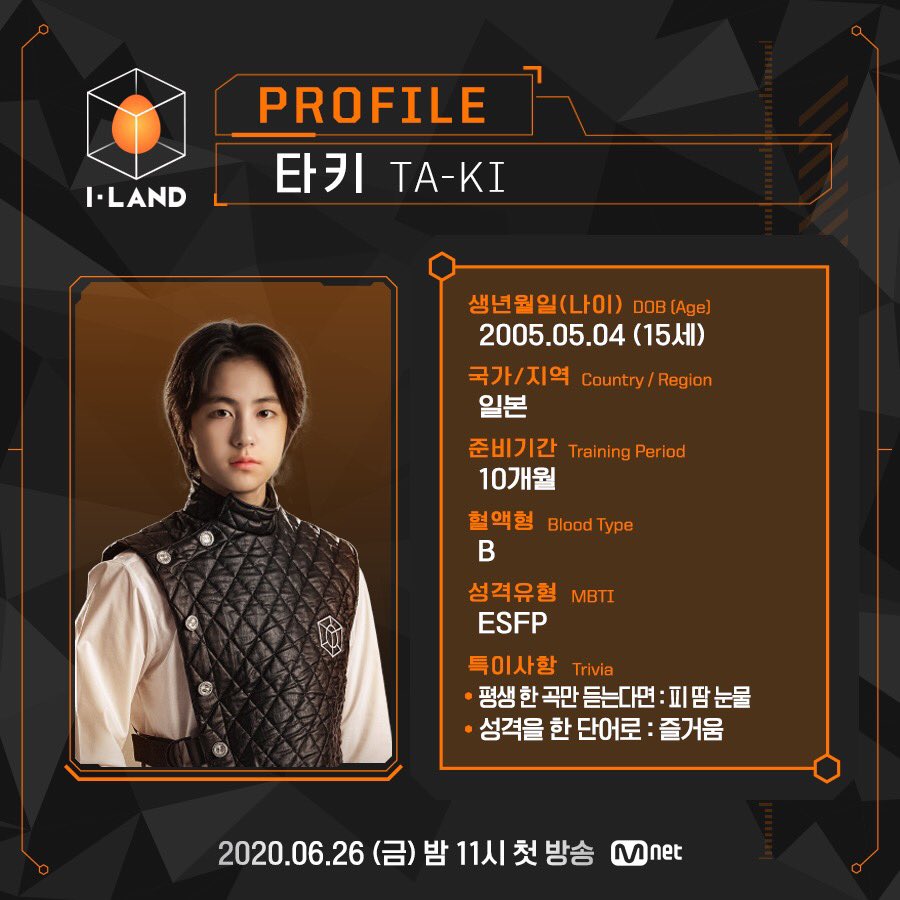 Ta-ki is admired by fans for both his fun personality which brings a special charm and his dance skills. He has said that if he could listen to only 1 song in his entire life it would be “Blood, Sweat & Tears” by BTS. He’s also described his personality as fun and joyful.

He’s known for being a being a big fan of BTS’s rapper Suga (Min Yoongi), and also being close with his fellow trainee K.

Most of the trainees from part 1 will not be able to move onto the second part of the show. The trainees below are those that were eliminated from the show after the global voting was closed.

Learn more about the members from part 1 that could move on to part 2: 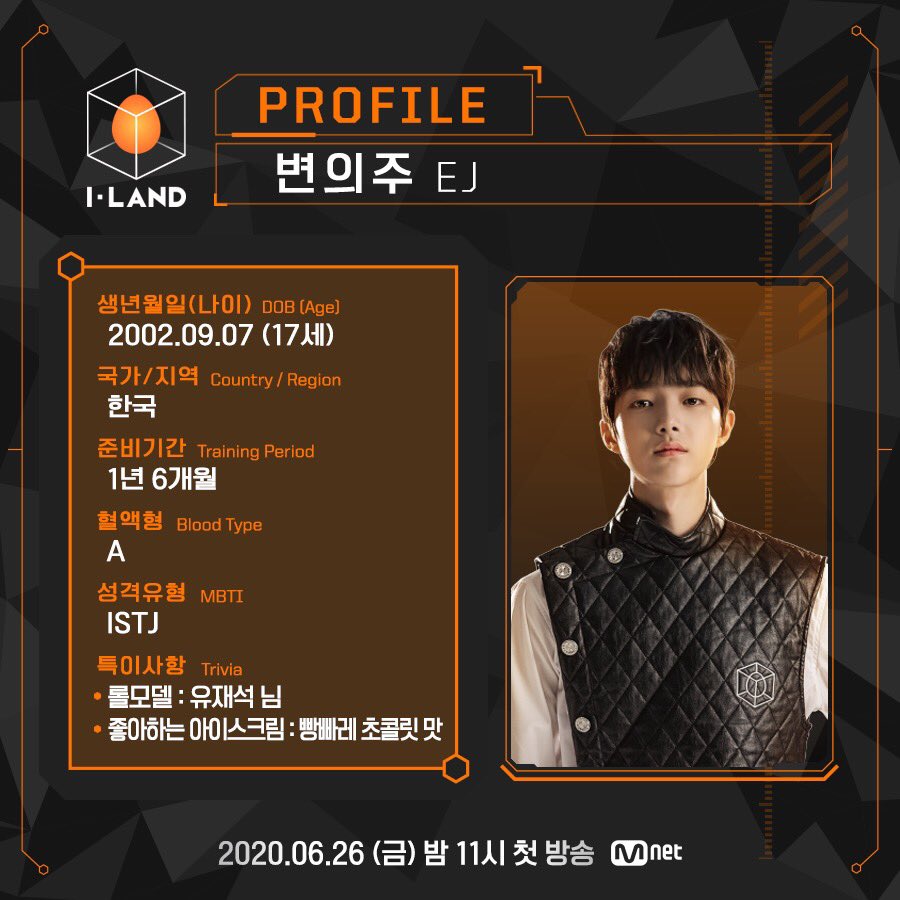 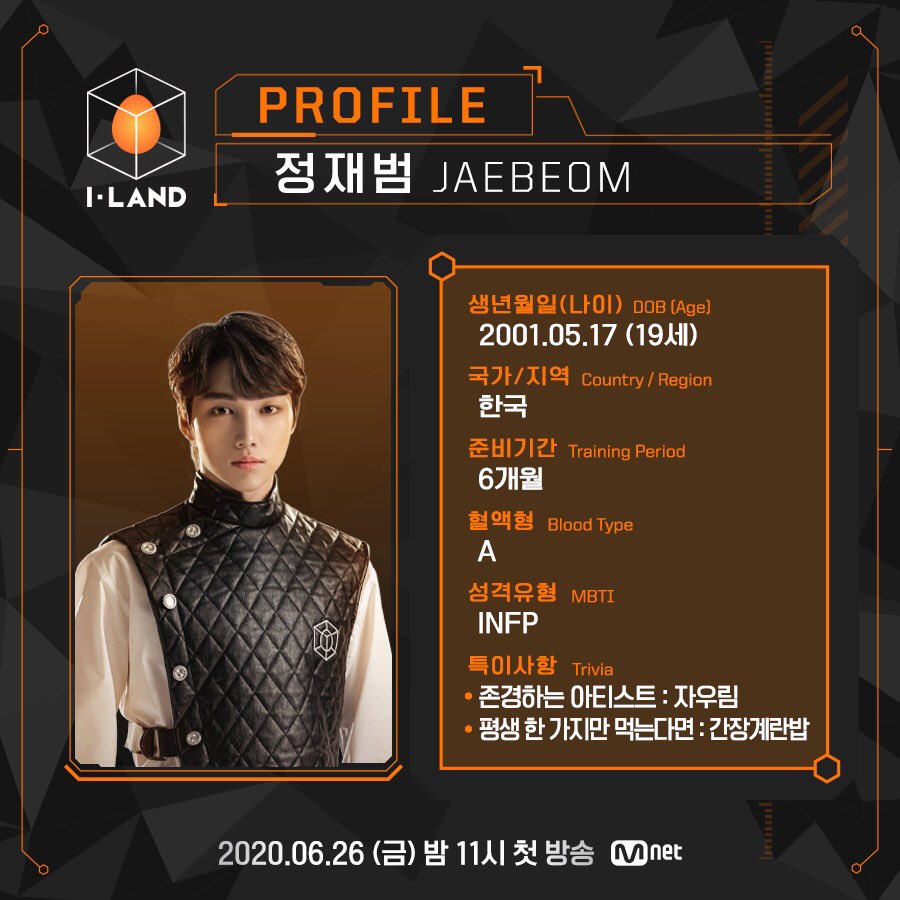 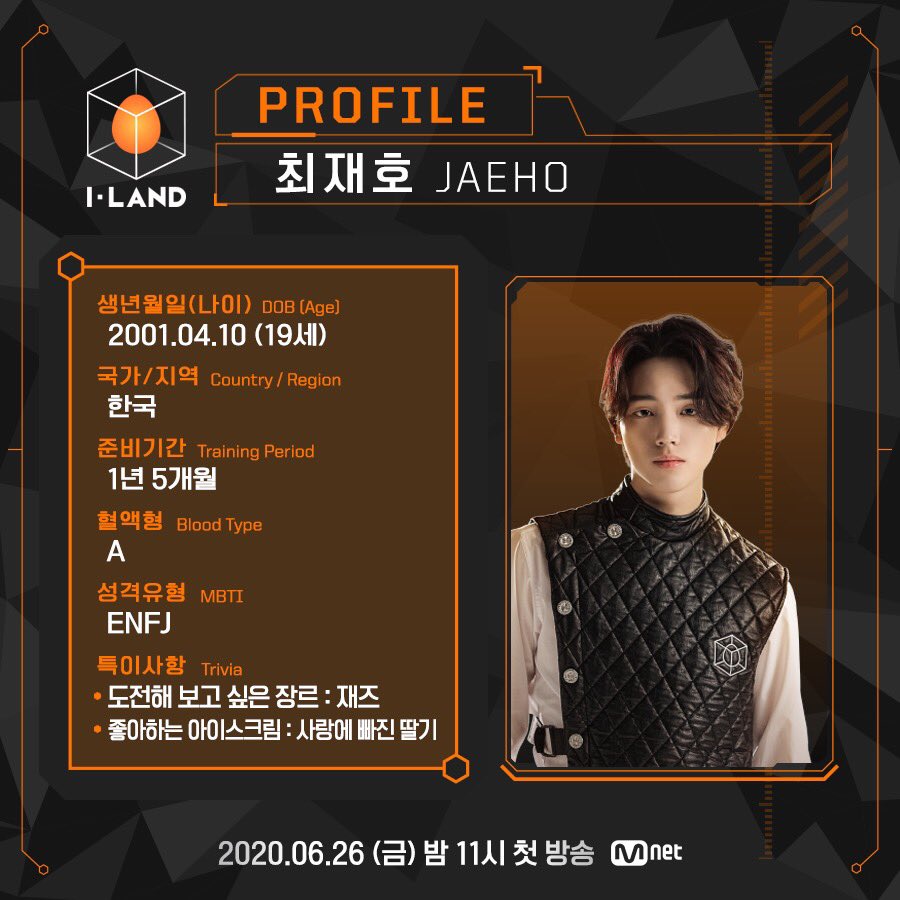 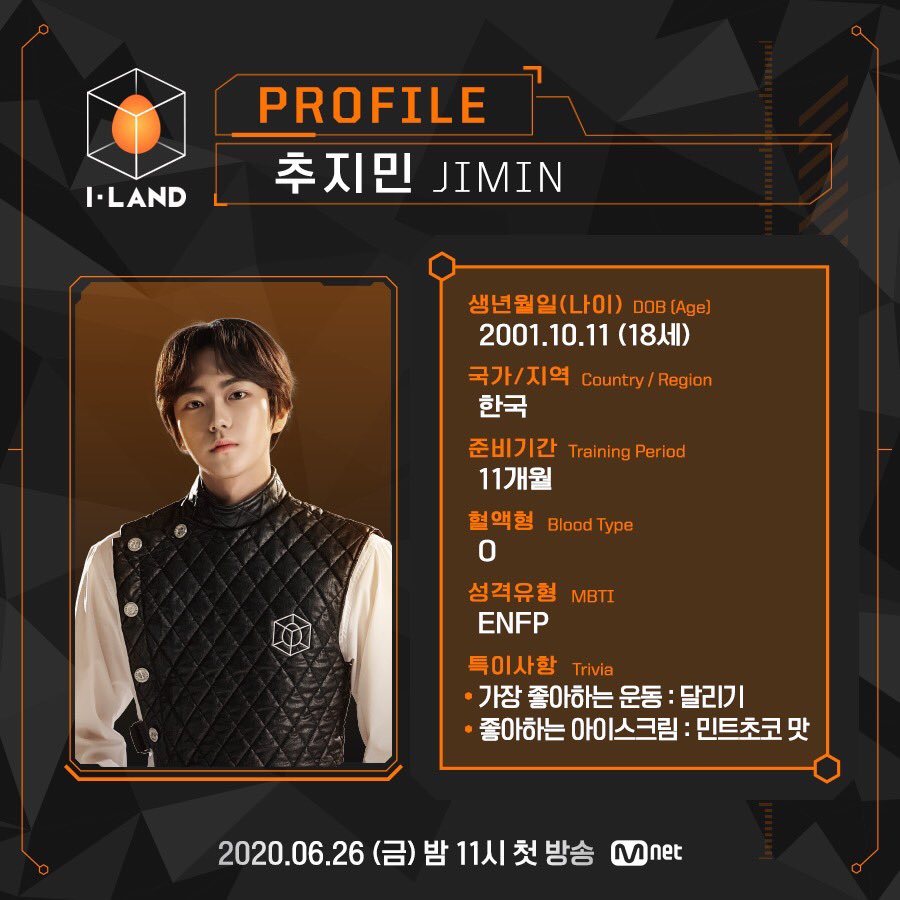 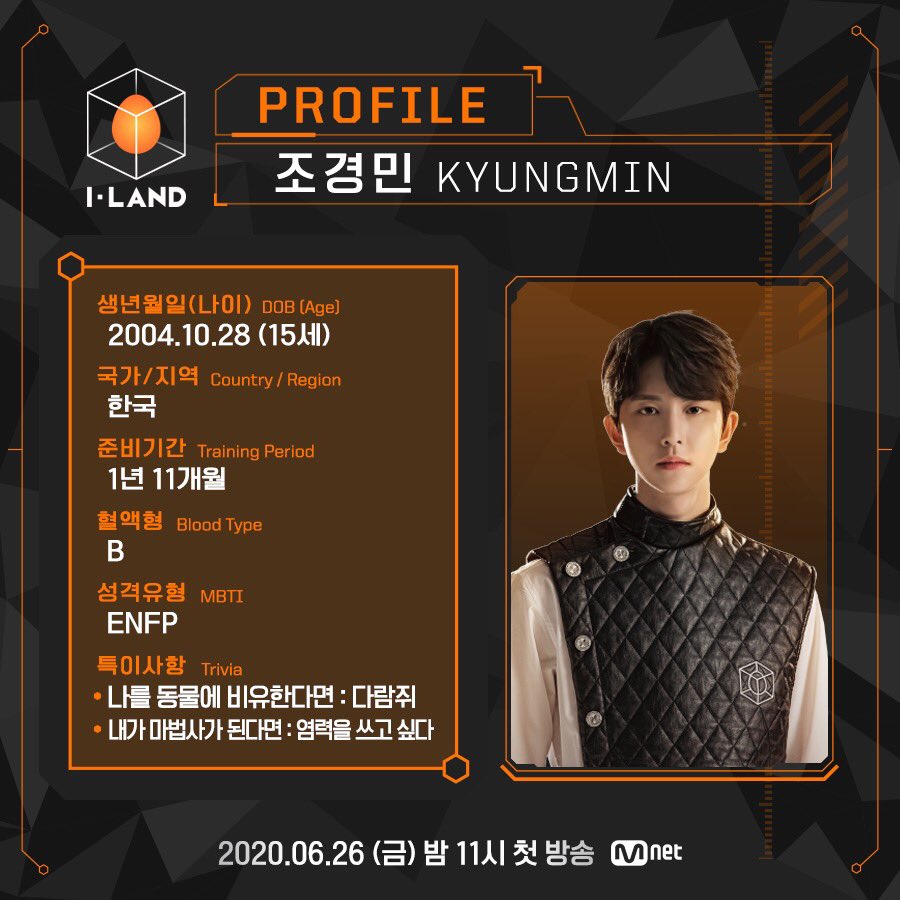 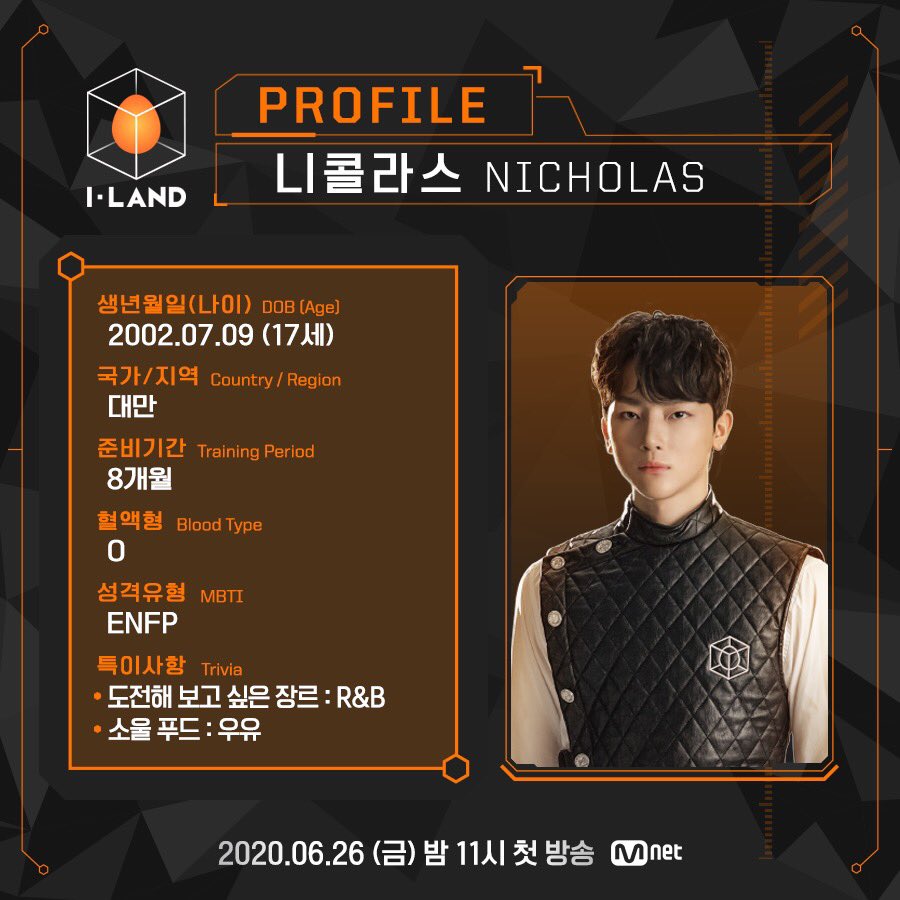 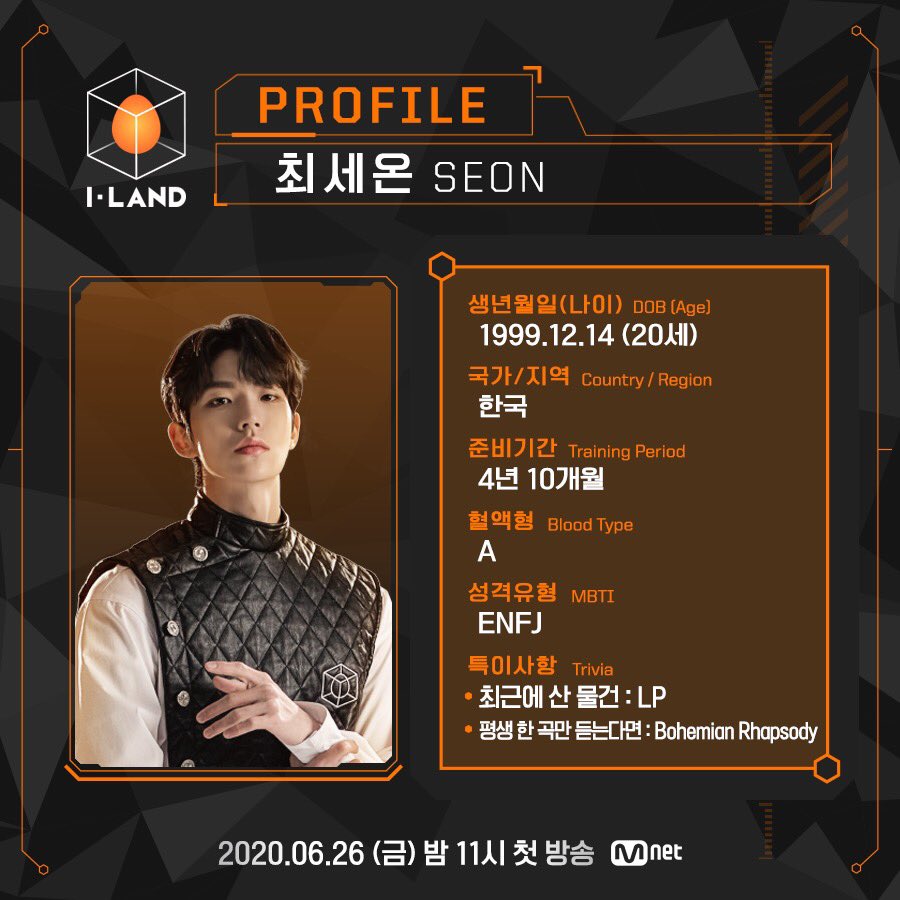 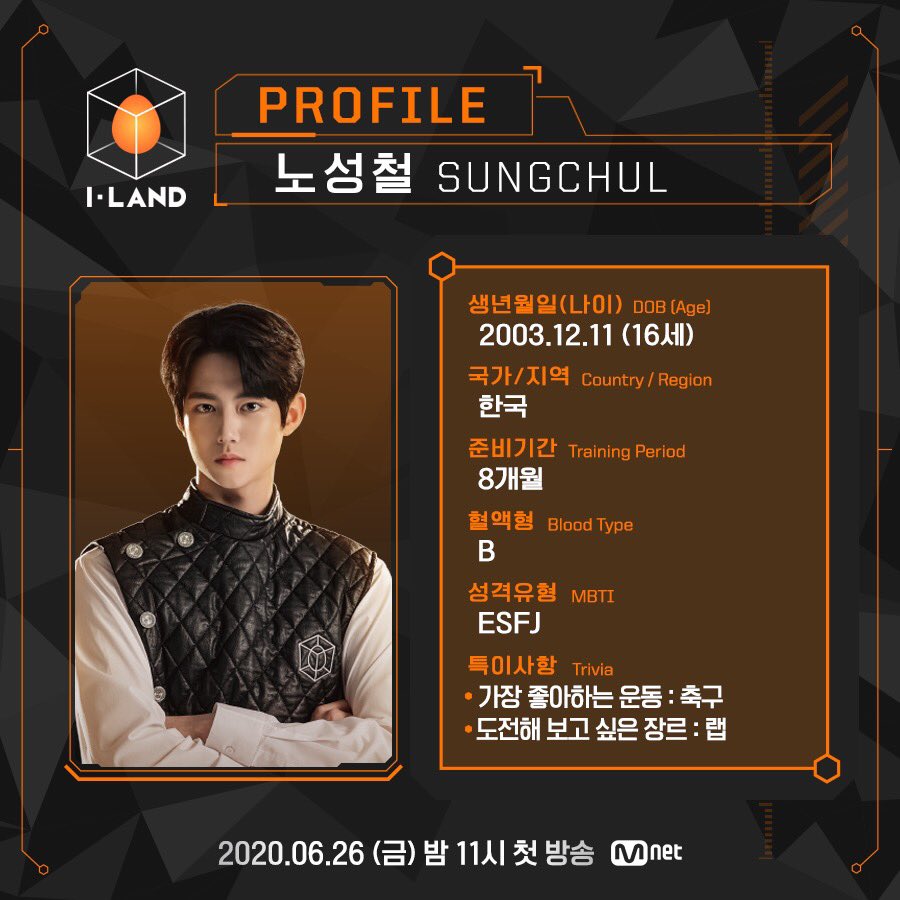 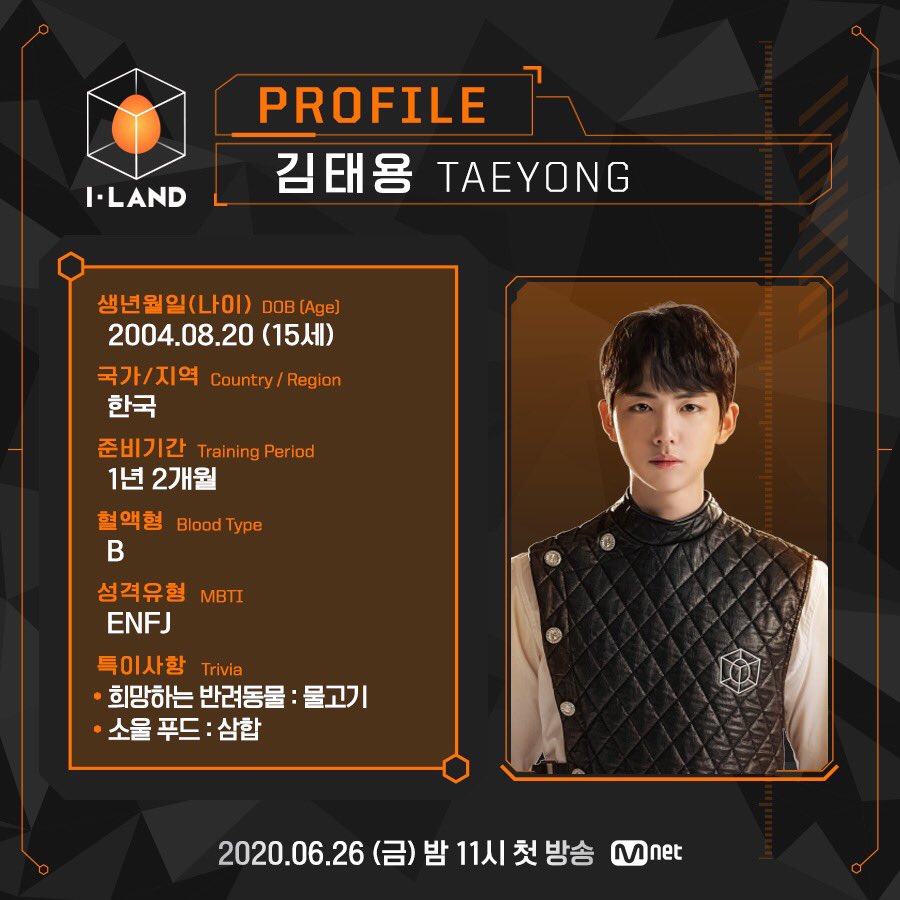 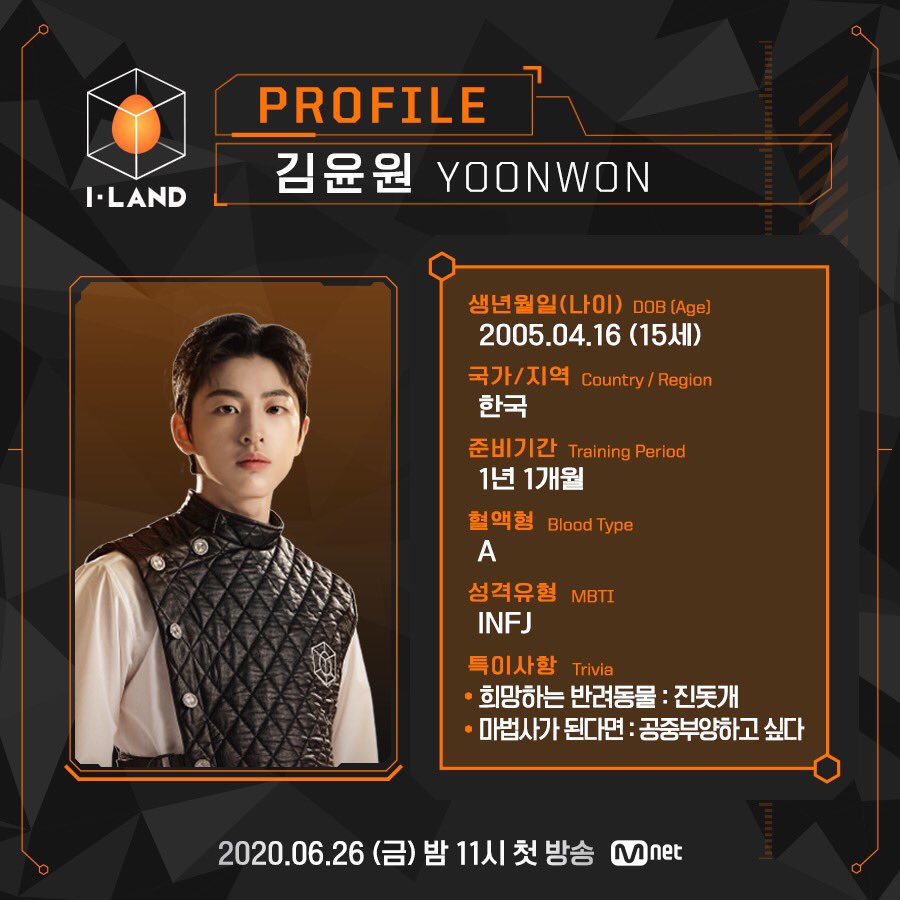 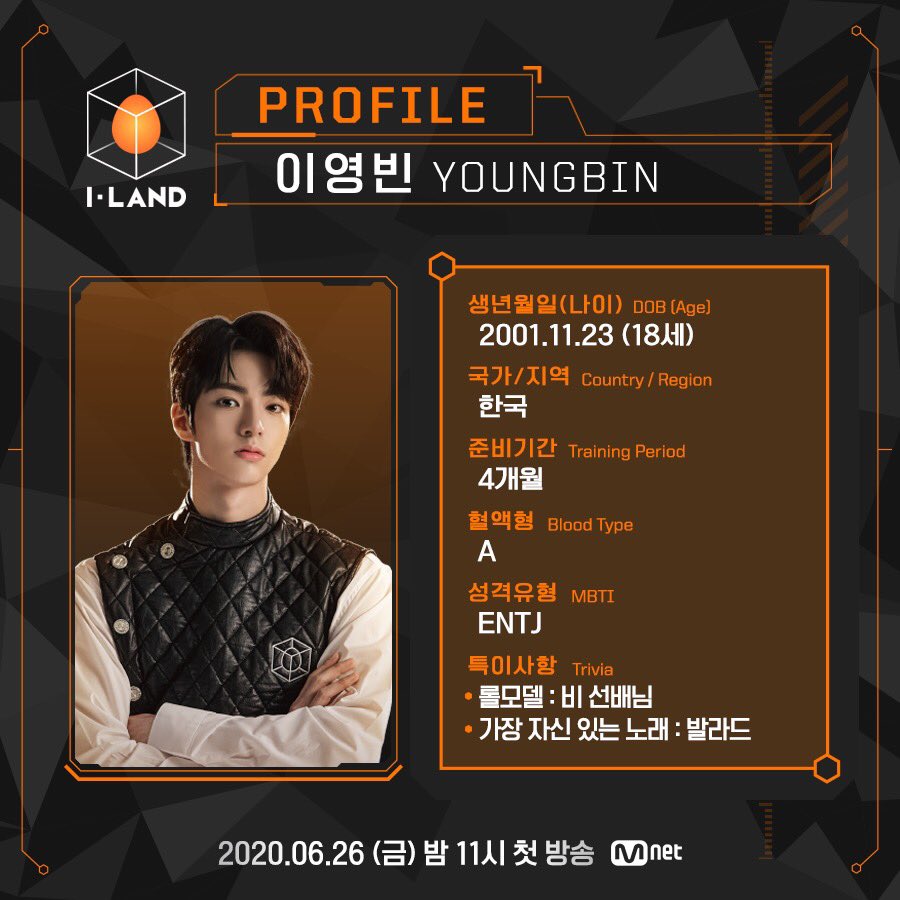 I-LAND episodes will be available to stream on Youtube as well as Rakuten Viki for international viewers! A special feature called I-LAND cams will be availble on Weverse!

Which ‘I-LAND’ member are you excited to learn more about?