This weekend, Disney’s Cruella—the live-action origin story of the villainous fashion designer Cruella DeVil, who came to fame in the 1961 animated classic One Hundred and One Dalmatians—hit both theaters and Disney+. This is the second live-action iteration of the material, with 101 (and 102) Dalmatians coming 25 years ago, starring Glenn Close as Cruella. The latest version, directed by Craig Gillespie of I, Tonya and Lars and the Real Girl fame, stars Emma Stone as the titular villain and Emma Thompson as her villain, the Baroness von Hellman, another famous designer in this world.

This version of the story begins with Cruella (born as Estella) as a child, a precocious, rule-breaking iconoclast, whose mother is killed in a freak accident. Cruella enters a life of grifting in London and eventually finds herself as an apprentice at the Baroness’ fashion house—where she soon realizes that it was at the Baroness’ party that her mother tragically died so many years ago.

Cruella tries to find a balance between bold, brash, broad satire with psychological realism. In its way, the story functions more as a superhero origin story than that of a villain. By the end of the film, Cruella isn’t even an antihero, but a true hero. 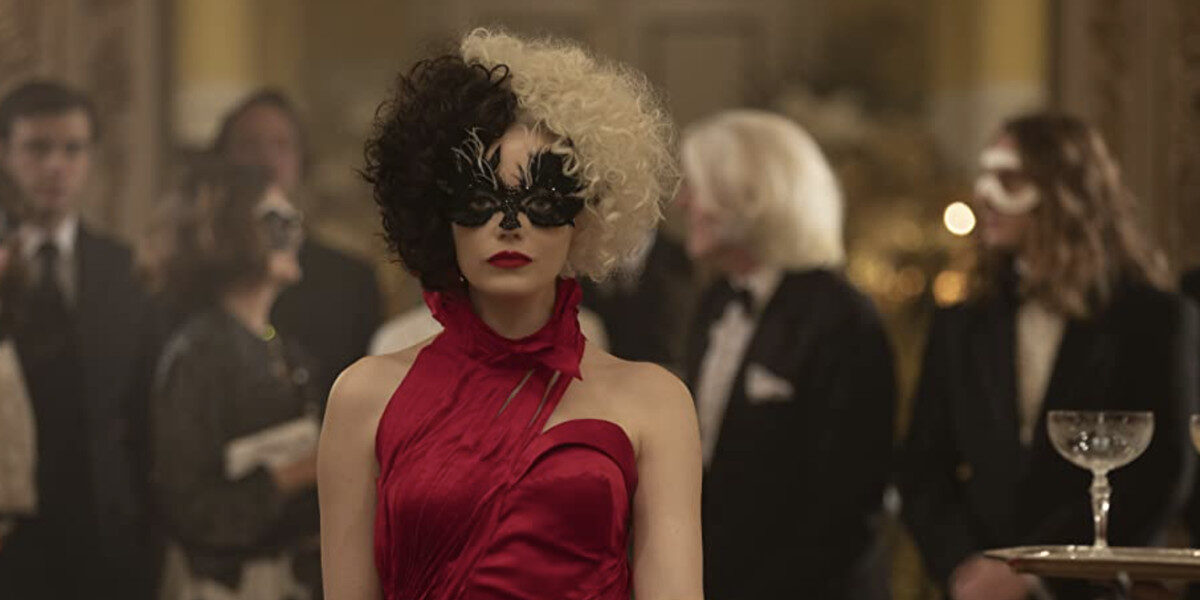 Stone’s Cruella, by starting as a young woman who has experienced intense trauma, seeing her mother pushed over a cliff by three vicious Dalmatians, is tasked with transforming from a real person into the villain that we all know—from Estella into Cruella—but there’s a catch. By the end of the film, Cruella has dipped her toes into revenge, almost turning fully mad and evil, but eventually she pulls back. She doesn’t kill any dogs and the Baroness pays for what she did to Cruella’s mother. Justice is served. Stone does her best, but by pushing the wickedness of the character without fully committing to it, the script fails her, dealing her an impossible task.

By offering easy explanations as to her motivations, Cruella neuters its title character. Turning her into the hero of the film feels like a cop out; the intent of the movie is clearly to have its cake and eat it too. Her henchmen, Horace and Jasper (played by Paul Walter Houser and Joel Fry, respectively), are her friends from her youthful grifting days, and they express dismay as she descends into obsessive revenge. That friendship is part of why Cruella reverts back to sanity (along with the natural human instinct to not be a murderer). Stone is unable to fully embrace either take on the character because the story doesn’t commit to what it wants Cruella to be—villain or hero.

101 Dalmatians, on the other hand, was strictly a broad comedy, with elements of fun adventure that kept the plot moving. It had an entirely different agenda from Cruella, and as such, Stone and Close were tasked with portraying the character in very different ways. 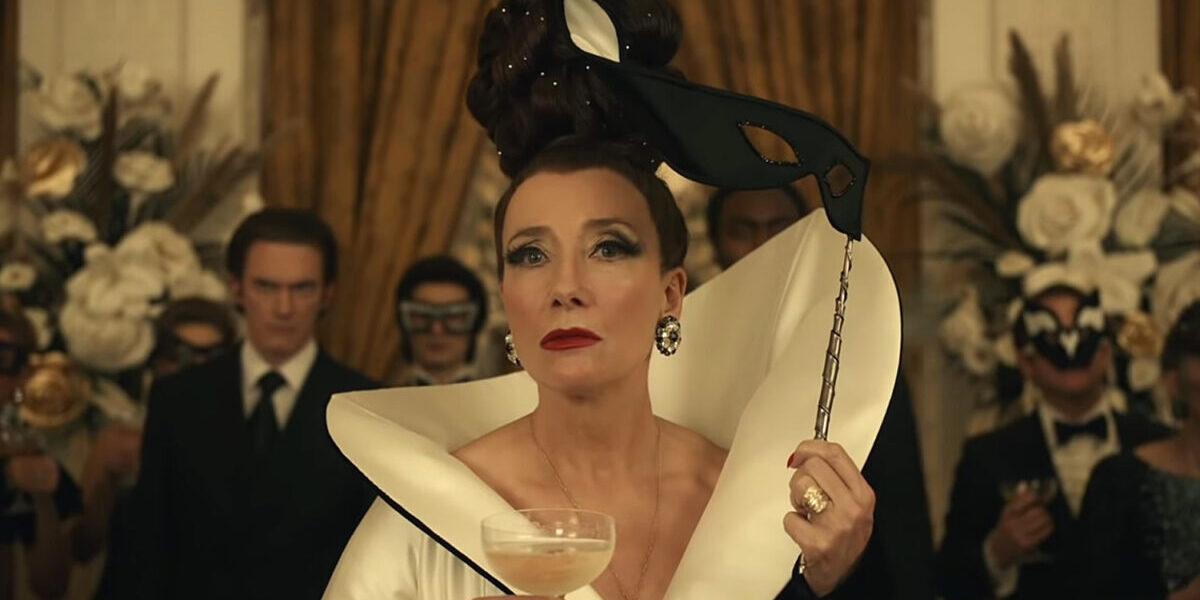 Close is able to forego any reason for her cruelty in 101 Dalmatians. She’s a fashion mogul who wants those puppies to make a coat, and that’s all there is to it. By the mid-90s, Close was one of the world’s biggest stars—specifically for playing bold, unhinged, scary women (as in her Academy Award-nominated roles in Fatal Attraction and Dangerous Liaisons, and her Tony Award-winning role in the Broadway musical adaptation of Sunset Boulevard). This was an event, for her to play someone who was a real monster.

Close’s villain is evil for the sake of being evil. The drive for a psychological realism in Cruella comes from a sense that people like Close’s Cruella don’t actually t exist, that there must be some trauma in her past that turned her into this, and maybe there is, but the lack of motivation makes her all the more frightening, and all the more fascinating. To psychologize the villain lets them off the hook by making them sympathetic, which is why Stone’s Cruella cannot ultimately become a puppy killer. The film cannot ask the audience to sympathize with a truly evil woman.

A different movie might give Cruella a backstory in a way that doesn’t lead you to sympathize with her but just understand her better, something that films by Martin Scorsese have often done, in Taxi Driver and The King of Comedy, which were the inspiration for Todd Phillips’ Oscar-winning film Joker. The audience is eager to follow those stories, to find out what happens next, but knowing the psychology of their protagonists does not make their actions any less reprehensible. They are compelling but they are not relatable. It has been said that Cruella may have been intended to be a female Joker for our era, a gritty drama about a villain, but Cruella pulls its punches in a way that Joker didn’t. 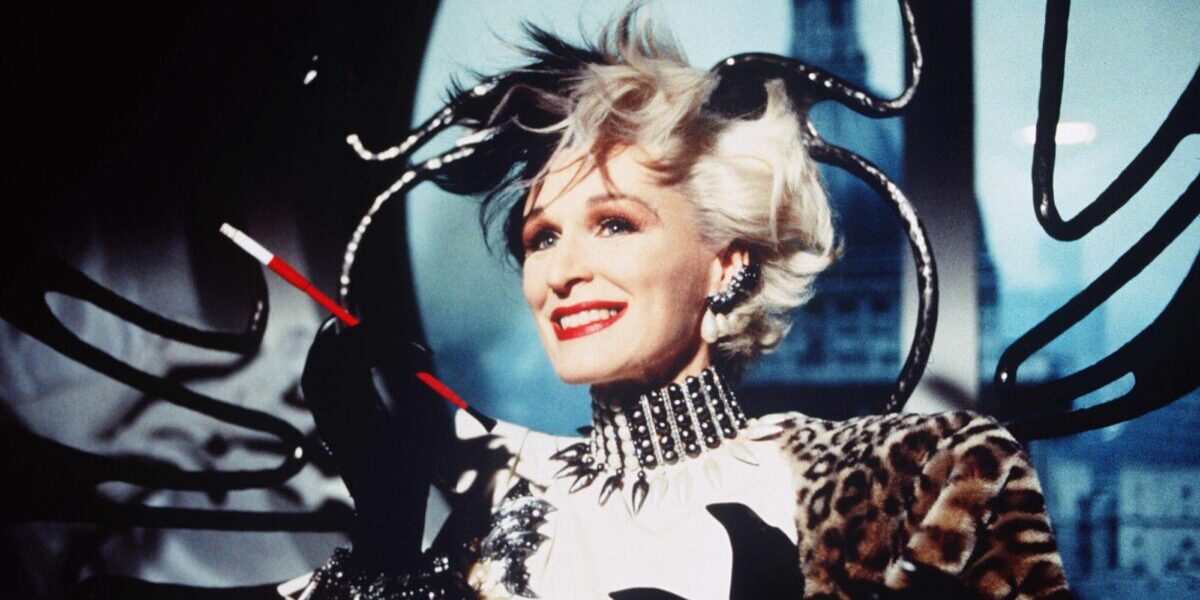 101 Dalmatians, on the other hand, doesn’t ask Close to be relatable and allows her vision of the villain to be so clear as to become iconic. It is such a specific, crystallized portrayal that it pushed the box office of that movie over $300 million (half a billion in today’s dollars). Audiences were dying to see what Glenn Close could do with the role.

Ultimately, Cruella tries to be both 101 Dalmatians and Joker in one, a combination that is impossible to reconcile. Because Cruella is a Disney film, it can’t be more adult than PG-13, which is a problem that Joker did not have. It’s a problem without a solution baked into the very concept of the film, which unfortunately left the great actress Emma Stone holding the bag and the blame.