We use cookies to ensure that we give you the best experience on Hypable. If you continue to visit us, we will assume that you are happy with it.
8:30 pm EDT, June 18, 2019

‘The Hidden Power of F*cking Up’ book review: The Try Guys succeed one fail at a time

The Hidden Power of F*cking Up is an intimate depiction of the Try Guys’ biggest insecurities and their most powerful accomplishments, wrapped up in a hilarious self-help guide.

Hidden Power serves a dual purpose: It’s perfect for fans who want to know more about the Guys while simultaneously being a pretty fucking good self-help guide. They really have developed their own failosophy, and it’s an incredible way to tackle life in all of its wonderful, terrible, uncertain glory.

Most people reading this book (and this article) will already be familiar with the Try Guys, but whether you’ve never heard of them before or can list off every single one of their videos in chronological order, Hidden Power gives you a detailed look into their lives like we’ve never seen before.

The first section of the book introduces us to the concept of failure being necessary for growth, as uncomfortable as that may be for most of us. It’s well-researched but also completely approachable in the way it’s written, which serves to provide a slew of important information while also keeping you interested.

This isn’t just a recap of how they became successful as Try Guys; it’s about helping people, and that is immediately apparent as soon as you open the book.

The Try Guys discuss the 'Hidden Power of F*cking Up,' living out their creative dreams

The following pages introduce us to each guy in turn: Keith, Ned, Zach, and Eugene. Long-time fans of the Try Guys will be familiar with their stories and will have already heard various anecdotes presented in the book, but Hidden Power lays it all bare, giving us a timeline that runs through childhood to adolescence to the present day in a way that’s never been so cohesive and insightful.

Once you get a better idea of who the guys are, we jump into the real purpose of this book. Each guy took on one aspect of their life they’d like to improve. Unlike most self-help books, these guys aren’t experts in their fields — quite the opposite, actually! — but they are experts in failing. And by showing us how failure can lead to success, they reveal its hidden power.

Yeah, they really got that title right.

Keith’s up first, taking on the health chapter. For someone who loves fried chicken, going vegan is probably his worst nightmare. But he did it, for himself and for us. It wasn’t all pretty, and he definitely didn’t stick to the diet 100% of the time, but he put in a concentrated effort. He even went to a CrossFit class!

Ned took on the style section. He’s always felt insecure about his clothes, deciding it was better to be safe than sorry. His challenge was to work with a stylist and come up with five outfits that tackled his fears head-on. There are some gorgeous full-page portraits of Ned in this section, each one a testament to his commitment to this task. 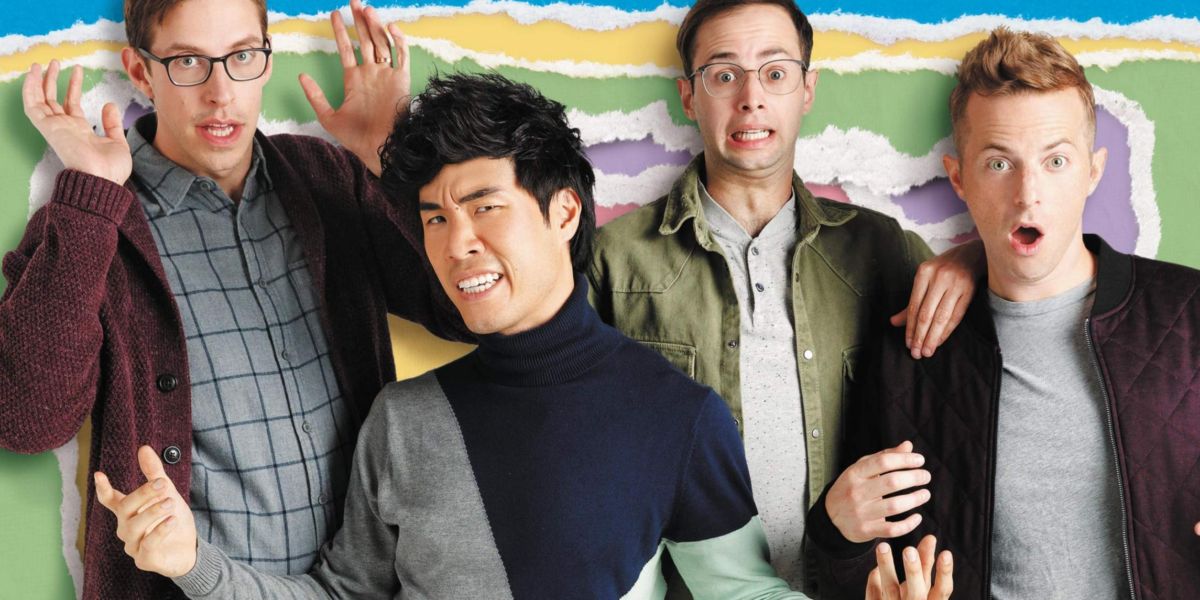 We pause in the middle so the Guys can complete a fifth, group task (they’re nothing if not overachievers). This time, it’s related to work and their newfound company, 2nd Try. Here, they talk a little bit about how much work goes on behind the scenes and then try to work like a famous CEO for the day. It might be one of the bigger fails in this book, but I think it also provides the most lessons.

From there, we jump into Zach’s section on love. It wasn’t too long ago that we found out he secretly had a girlfriend, so it seems appropriate that he’d headline this particular part of the book. He talks about meeting Maggie and the wonderful relationship they have, but also recognizes that he could do more and sets out to accomplish exactly that.

Lastly, we have Eugene. He and his family are perhaps more enigmatic than the other Try Guys and their relatives, so this section is particularly enlightening. He discusses his familial dynamic and then allows the other Try Guys to give him a set of three challenges he must complete in order to get closer to his family.

While each section is headlined by one of the Try Guys, every single one of them talks about their own experiences in each chapter. Zach opens up about having ankylosing spondylitis in the health chapter, Eugene talks about what fashion means to him in the style chapter, Ned candidly discusses his relationship with his wife in the love chapter, and Keith weighs in on the relationships he has with his own family in the final chapter.

It’s almost like the four of them are sitting in the room with you, sharing all their innermost thoughts. Sometimes they interrupt each other and sometimes they’re there simply to offer some kind words. You even get some bickering, but in the end, it’s clear Keith, Ned, Zach, and Eugene took a huge leap of faith knowing the others would be there to help them land on their own feet.

It’s hard to truly categorize this book. On the one hand, it reads very much like a memoir. We learn a lot about each Try Guy, both personally and professionally. On the other hand, it’s designed to showcase some of their most embarrassing moments and force you to realize that even the most successful people you know (either in real life or on the internet) still fuck up sometimes. It also deserves equal placement on both your nightstand and your coffee table. (Seriously, the pictures and the layout are stunning.)

At the end of the day, what strikes me most is that this is an honest, open discussion about failure. Even they admit how much it sucks to fail. No one likes to live in that discomfort. But they’ve built a brand on picking themselves back up again, and that’s what this book is truly about.

There’s no doubt that the Try Guys are successful, but that doesn’t mean they never mess up. It also doesn’t mean they’re not insecure about all the same things we are. But by embracing the ups and downs, and choosing to actively work toward bettering themselves, they’ve offered their fans an avenue to walk right alongside them.

It’s not always an easy journey (for them or us — I definitely cried a few times), but it’s a rewarding one. The Try Guys truly want to help other people navigate this thing we call life, and whether it’s through their videos or this book, it’s clear they’re doing a damn good job of it.

The Hidden Power of F*cking Up is available now! You can order it from Amazon, Barnes & Noble, IndieBound, and Book Depository, or add it to your Goodreads list. 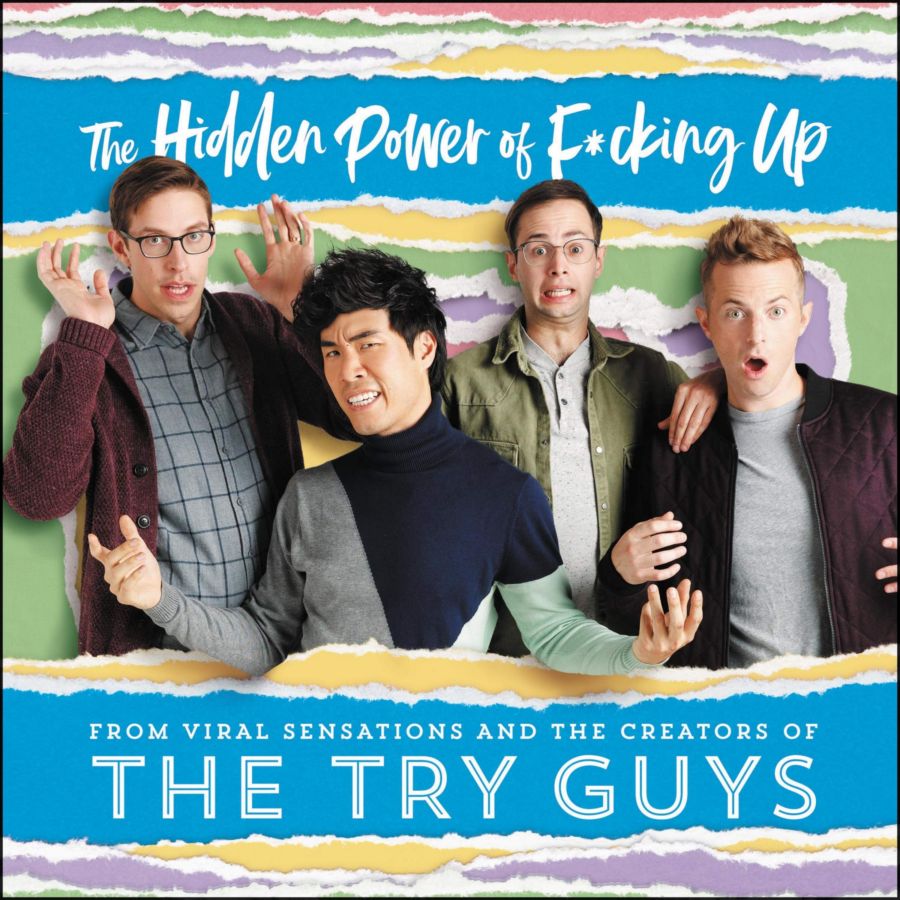