We use cookies to ensure that we give you the best experience on Hypable. If you continue to visit us, we will assume that you are happy with it.
11:00 am EDT, August 19, 2015

Four years ago two of my best friends and I were talking and we said, “Wouldn’t it be fun to watch all the Harry Potter movies back to back?” to which we all enthusiastically replied “Yes!”

Yet as the years passed and we moved busily through high school, the chance never came up to do it. With all three of us heading off to college this fall, we knew that it was now or never. So three weeks ago we got together and began what we had been planning for four years: A Harry Potter Movie Marathon. Now I’m not here to boast about what we did, I merely wish to chronicle what transpired. So without any further ado, I present a “Tale of Three  Friends.”

It was 1 o’clock in the afternoon and my two friends and I were finally sitting in a theater-esque basement, anxiously ready to start a 21-hour long journey. We had our cloaks, our wands, and all eight movies stacked up next to the DVD player. The lights dimmed, the Warner Brothers logo flashed across the screen, and we were off!

Harry Potter and the Sorcerer’s Stone brought waves of nostalgia, and we quoted almost the whole movie between the three of us. This was the least eventful of the movies, as it was only the start of the journey. As the train left Hogsmeade Station and Hagrid waved the kids goodbye, we knew that it wasn’t really goodbye for us. We quickly popped in Chamber of Secrets, itching to continue. The Warner Brothers logo came and went again, and we were back for another magical year at Hogwarts, plagued only by the dangers of — that’s right, you guessed it: puberty. From Harry’s first deep grunts to Ron’s wonderful voice cracks, we had settled in to the voices we would be hearing for the next eighteen hours.

Before we knew it, the second movie was over, a horcrux had been destroyed, and we all had tears in our eyes as the students of Hogwarts applauded for Hagrid’s return (I guess Chris Colombus loves ending movies with Hagrid; he should’ve tried that with Percy Jackson). In almost no time, Prisoner of Azkaban had started and Harry was doing some funny business with his wand in his bed in the middle of the night. By the time Harry got to Hogwarts, it was clear that this movie had a very different tone than the first two. The three of us watching were able to appreciate the maturing of the kids after just witnessing their youthful acting for five hours.

And then, just like the two before it, the third movie was over in the unforgettable freeze frame of Harry riding off to who-knows-where. At this point in our movie watching journey we were ready for pizza, Butterbeer, and some strong black tea (or a large brandy).

After quickly grabbing some pizza, frantically stirring our Butterbeer together and bringing down the box of tea, we loaded up Goblet of Fire and sat down for what we knew would be a long time.

After watching three movies of relative youthfulness and whimsicality, Goblet of Fire really struck us as the first step towards the world that Harry Potter would live in for the next four movies. The obnoxiously long hair that the boys sported in this film actually seemed very reasonable after watching the movies in succession. It showed a nice transition into the rebellious world of teenagers while maintaining the heart of the characters.

Again, this movie was over before we could say “quidditch,” and by now it was a little bit past midnight. It was daunting, to say the least, to think that we were only halfway done, but we were determined to see this to the end. Energized by the over-dosage of black tea, we loaded up Order of the Phoenix and were welcomed into the world of David Yates. The sudden shift into wide, sweeping panoramic views was actually very impressive after watching the (for lack of a better word) cramped fourth movie. The clean-cut hair was also a nice touch. This movie, like the book it heralds from, went by slower than we expected. It took forever for the kids to get to the Department of Mysteries and face Voldemort. Nevertheless, we enjoyed the movie and were still functioning when we loaded up Half-Blood Prince.

I’ll keep it simple and summarize the sixth movie in one word: darkness. Literally every scene had a darkness filter over it and the whole thing seemed so damn depressing. We still loved it, but when it was over we all were a little depressed ourselves. 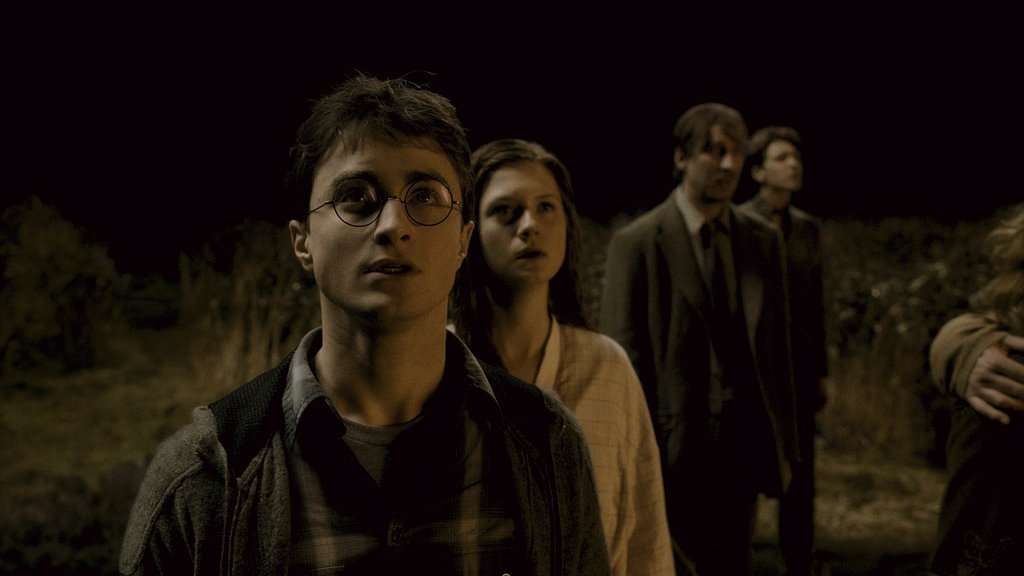 This is the point in our tale where things start to change. All of Deathly Hallows, Part 1 had an overlying “bleh” factor because of our lack of sleep. We still were able to get through it and enjoy it, but it was not a pleasant ride. As green lighting shot up into the air and the screen flashed to white, all of three of us knew what was about to happen. We were about to start the final movie of the Marathon. Long story short, the final movie was over, ending with an emotional dagger stabbing us in the hearts as we saw a new generation going off to Hogwarts.

And then it was done. We were sleep-deprived to say the least, and the rest of the day we heard Harry Potter noises and music wherever we went. But to see the development of the characters, the actors, and the directors over a short amount of time made us all appreciate even more the work that went into the films. What marveled us further was the fact that this whole film franchise had stemmed from seven books written by one individual.

Above all else the three of us cherished the 21 hours-plus that we had just spent together. All of us had grown up with Harry Potter, and that is what actually sparked our initial friendship. To spend some of our final moments together before heading off to college watching all of the movies was amazing. In the moment, none of us looked at it as a time of reflection. It was simply an awesome time with best friends. However looking back on it, I could not think of a better way to have relived Harry Potter and our friendship.

The three of us met around 6th grade (Harry’s First Year) and have remained friends since. Although we never truly followed Harry’s story — Voldemort was never a threat to us — watching the movies in succession was kind of like watching the past seven years of our life. We had worked together, laughed together, struggled through romances together, and even though one of our friends moved and changed school districts, we were still able to remain best friends. We met plenty of Malfoys along the way, and had teachers that reminded us of Umbridge and Trewlawney, but we met even more Rons, Hermiones, Ginnys, Nevilles, Lunas, and Harrys.

The past seven years have gone by faster than I ever imagined, and watching all of the movies in a row really reminded me of how fast time can be. Despite the fact that the three of us are going our separate ways this fall, I know it’s only a matter of time before we meet again at our own King’s Cross Station.

Some might call what we did over that 21 hour span madness, but our consensus after all was said and done? Purely magical.

by Karen Rought
by Brittany Lovely