Grey’s Anatomy season 16 is finally here, and the premiere episode didn’t let us down! With a series of flash forwards, there was plenty of drama!

The Grey’s Anatomy season 16 premiere is all about the relationships in the series and where they’re going after all the drama from last season.

Through a series of flash forwards, viewers are treated to a look at how things unfolded in the weeks following the point from where we last left the characters.

When we left off with Jo last season on Grey’s Anatomy, she was heading into treatment for her depression.

Right from the start of the episode, Jo is seen checking in. Which is somewhat of a demoralizing process of having to give up all her personal items and being patted down by staff.

She’s left in tears at the end of it all, and it’s a punch in the gut to see her in that state.

Maggie had just gone looking into the fog for Jackson when we last saw her. She’s still looking for him when the episode starts, but she quickly finds him.

Jackson located some hurt mountain climbers and an ambulance from Station 19 quickly arrives. Together, Jackson and Vic manage to save them and then they all leave the fog for the hospital.

Meredith made a dramatic goodbye to her kids and told DeLuca her plans to confess at the end of last season.

Then at the start of this season, she’s meeting with her lawyer to go over everything that really happened. She’s confused when her lawyer doesn’t seem very fazed and tells her to go back home while she takes care of it all.

It’s actually kind of a funny moment, despite the seriousness of the situation!

After just having given birth Teddy and Owen get a visit from Amelia with Leo to meet his baby sister.

It’s cute until Bailey interrupts because she needs Owen and Amelia’s help. She also drops the bomb that Weber, Alex, and Meredith were fired and leaves them all confused with talk of criminal activity.

Apparently, Teddy doesn’t get to relax with her baby because they leave Leo with her and then Tom shows up. He’s not surprised at all that Teddy is back with Owen now.

But he doesn’t want to give up on her either, so it looks like Tom is sticking around for her, too.

He’s actually helpful though because he takes Leo away to bring him to daycare and, of course, that can’t help Teddy’s emotions. 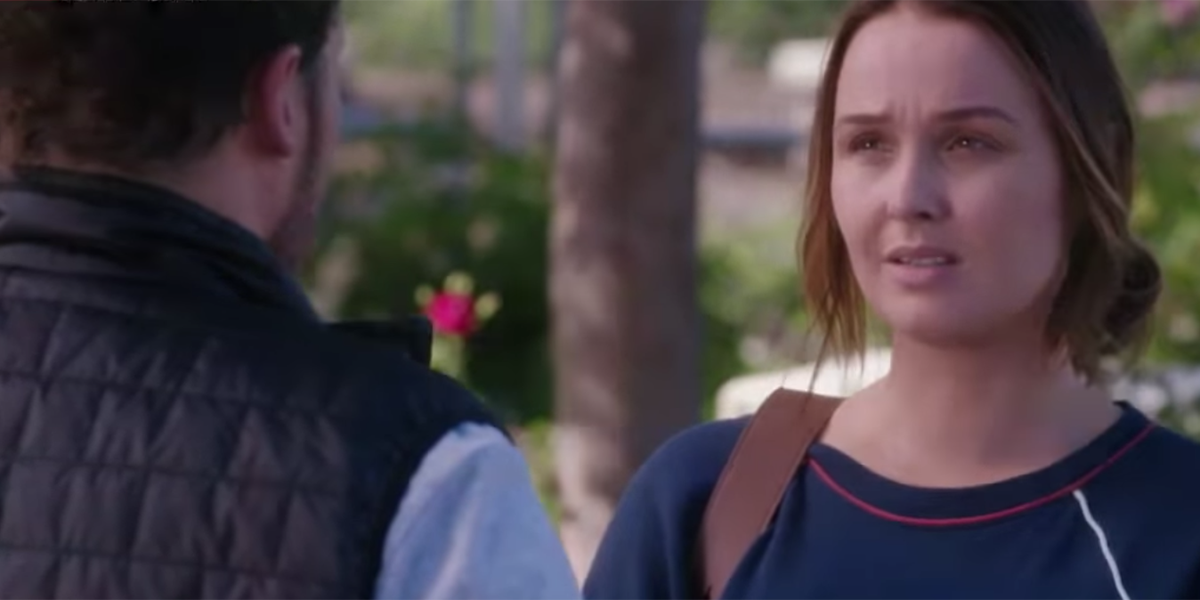 At this point, there’s a time jump on Grey’s Anatomy and Jo is seen being dropped off at the treatment center by Alex. It’s a tense moment where Jo tells him that they’re not legally married, so she understands if he wants to use this as an out.

They don’t resolve it at all, and she leaves to go inside alone. There’s a big question mark over what will happen with them now.

It also looks like Link is just as confused as everyone else with what’s going on with Amelia. She explains to him, in the middle of a surgery, that she does want to keep dating him but take things slowly.

Amelia’s trying to be rational and not jump in too quickly just yet.

Teddy and Owen are supposed to be a family now, but she’s living in a hotel.

The baby is crying and Teddy is crying and Owen is confused as to why she won’t just move in with him. Owen’s not really good with emotional stuff, as we all know. Teddy has to explain to him that she doesn’t want to live in his home with Amelia.

It’s obvious that Teddy is having a hard time adjusting to being a new mom and Owen doesn’t get it. And it’s really not a good look on him so early in their new relationship.

Things are a little better for DeLuca, who is out of jail and gets his job back thanks for the hospital’s shortage of doctors. He might be on a tight rope though, as Bailey is still upset with him and basically has no choice but to let him back to work.

After taking a week to cool off, Jackson and Maggie start talking again, but they’re both on different pages. Jackson thinks he’s done nothing wrong as usual, and Maggie is rightly upset at how he treated her on their excursion in the woods.

Finally, they break up. Annoyingly, it is Jackson who says they’re broken beyond repair. It’s hard not to feel like Maggie will continue to feel badly at the way Jackson made her feel even when they’re done. 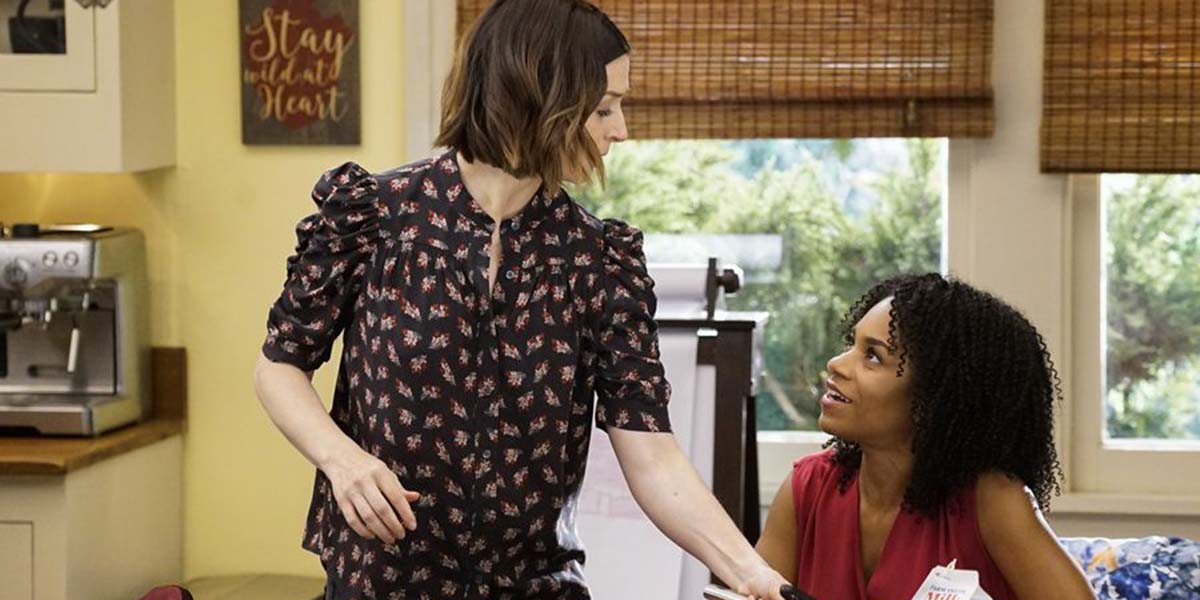 Another time jump on Grey’s Anatomy shows that the breakup is sticking! Maggie tells her sisters that she wants someone who treats her better and hopefully this will actually happen.

Jackson seems to be ready to move on fast, as he talks to Vic (hello little Station 19 crossover). He approaches her on the guise of thanking her for saving them on the mountain. But he’s also quick to ask her out, which she’s interested in, too.

This is actually kind of annoying, but it also shows that Jackson isn’t right for Maggie.

Owen continues to be a hot mess and shows up at the hospital looking for Teddy. He’s worried she brought the baby there and admits to Amelia that he offered to milk her when she was having trouble breast feeding.

Thankfully, Amelia tells him to be patient and also can’t believe his milking comment…and neither can we.

He doesn’t know that Teddy is actually at the hospital, but she’s just napping in one of the doctor’s lounges with the baby. After a little talk with Bailey, she looks like she’s in better spirits, if only she can get things with Owen to a better place.

Link and Amelia seem to be enjoying dating and getting to know each other better. Weber tries to go out for a new job at another hospital but they worry about his age, ouch.

Weber ends up changing his course of action and tells Alex to go out for the job instead. That way, if Alex gets it, then he can have an in for a job as well. It looks like these two will be sticking together at the very least. 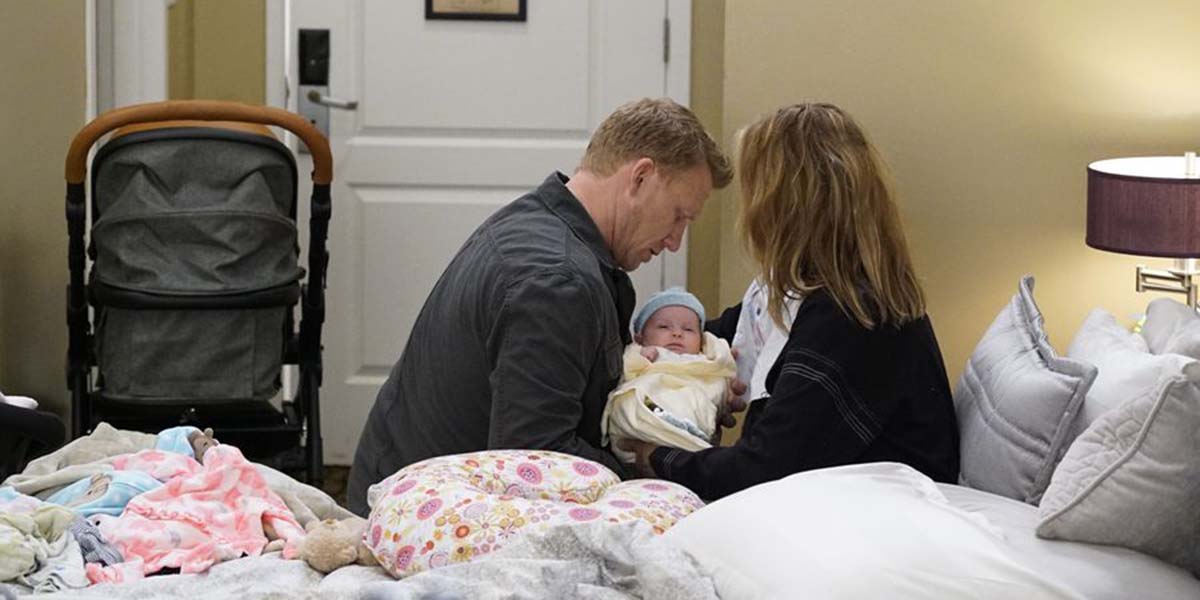 The final time jump on Grey’s Anatomy quickly sets up different storylines for a few of the couples!

Jo is being released from the center and Alex goes to pick her up. In a cheesy but adorable moment, he tells her that he doesn’t want the out. He wants to marry her for real.

Thank you to the Grey’s Anatomy writers for not breaking up my favorite couple. You really had me worried for a while there.

Owen gets it together and finally lists the house for sale. He lets Teddy know that they’re going to buy a new one together and until then, he got them a better suite to stay in.

Maybe Owen can actually step it up and be there for her? We’ll see what happens next because I don’t trust him just yet.

Amelia goes to see Carina to ask about a three-way and leaves figuring out that she’s pregnant. I really wasn’t expecting that one at all!

It looks like Amelia’s plan to take it slow with Link might be out the window? This could bring up a lot of feelings for Amelia; we already saw how trying to get pregnant with Owen sent her through a lot of emotions from past trauma.

I’m worried about what this could mean for her emotional development. It looked like she was straightening everything out, and now it could all go bad very fast.

As she’s leaving work, Maggie sees Jackson with Vic. They’re just talking, but it’s clearly way more than just a friends thing, and Maggie is hurt. Jackson is kind of rude about it, and now it looks like they straight up hate each other?

I’d like to see this drive Maggie to move on with someone new instead of feeling bad for herself. She doesn’t deserve any more pain on Jackson’s behalf.

Catherine apparently found out that Weber got a new job with Alex, and she is not happy about it! He’s mad at her and she’s mad at him, and I have no idea what will happen with them.

She still has cancer, though, so I doubt Weber will leave her. I’m just not sure how they can repair things. Unless Catherine can magically get his job back at the hospital.

At the end of the episode, Meredith and DeLuca are enjoying time together, but it’s ruined when she gets bad news. Despite what her lawyer told her earlier, the board is seeking action to take away her medical license.

Now Meredith’s future as a doctor is in limbo.

What did you think of the ‘Grey’s Anatomy’ season 16 premiere?

Why I love ‘Mockingjay’ (no matter what the Internet haters say)

Your definitive ranking of Halloween movies

Unaltered Star Wars theatrical cuts rumored to be released: Why it's culturally important