We use cookies to ensure that we give you the best experience on Hypable. If you continue to visit us, we will assume that you are happy with it.
8:30 pm EDT, April 13, 2020

Melissa de La Cruz has all the fun with her re-imagined cast of DC Comics heroes and villains in the newest DC YA Graphic Novel Gotham High.

All of DC’s YA graphic novels have re-imagined their heroes and villains to tailor their stories and characters to a young adult crowd — aging the characters down to their teenage years and giving them problems and storylines which are relatable to their central audience.

However, while all of these DC YA graphic novels have done a fantastic job in re-imagining their characters and giving us evocative and exciting stories, I will say that Melissa de La Cruz’s Gotham High seems like the one that had the most fun with its re-imagining.

The book is a breezier read than Shadow of the Batgirl, more traditionally high school than either The Oracle Code or Harley Quinn: Breaking Glass.

However, what it lacks in seriousness and deeper messaging, it more than makes up for with its fun, its willingness to approach old heroes in new ways, and its slightly absurd storylines that would feel right at home on The CW.

Admittedly, that’s not the approach to comics — nor to these iconic heroes and villains — that will appeal to everyone, especially those fanatically bound to established canon.

However, if you love teen fiction, embrace YA tropes, and are open to re-imaginings of your favorite heroes and villains, then Gotham High will be just as fun for you as it was for me. 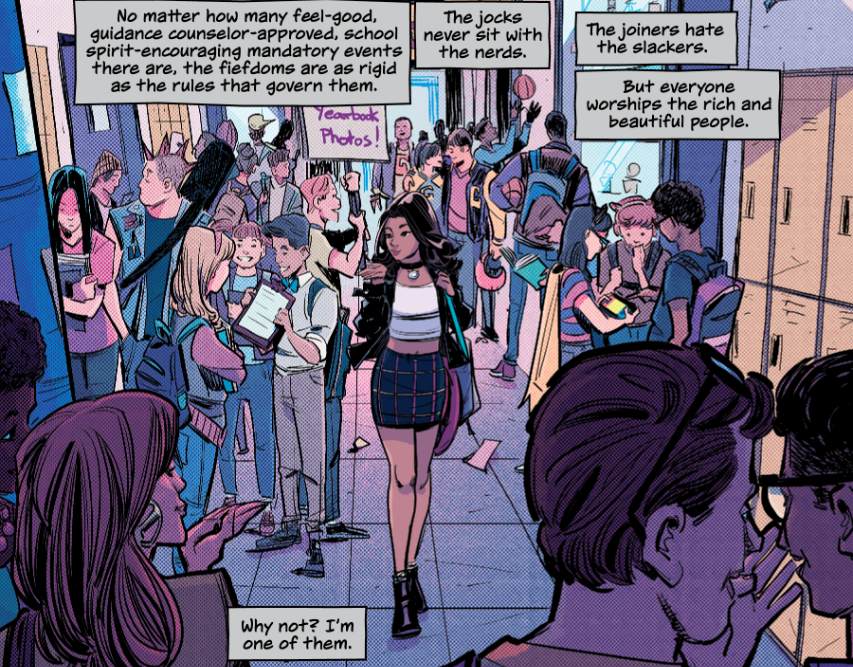 My very first impression of Gotham High was that it felt like a first-rate comic book high school AU that you’d find at the top of the ao3 list if you searched for stories with the most kudos.

Gotham High leans into its high school setting and shows a complete commitment to its teen tropes, imbuing its characters and storylines with all the sensationalized and somewhat absurd shenanigans that we’ve now come to expect from our delightful teen TV shows.

That means that the storytelling in Gotham High hinges on love triangles, teen angst, wild parties and a lurid rash of kidnappings, with all our favorite de-aged Gotham City residents playing an integral role.

All the elements in the story are things that would be right at home in the latest episode of Riverdale — or its superior Spanish-language spiritual sister-show Elite — both shows which I enjoy the hell out of, even if I’m occasionally mystified by the decisions of the characters or exasperated by what they’re choosing to do with their lives.

But that’s the fun of these teen shows — and of Gotham High. Melissa de la Cruz enthusiastically embraces its superheroes-as-regular-teenagers conceit and has fun with it.

In doing so, she reminded me of my favorite thing about comics books — the fact that they’re a medium, not a genre — which means they can tell whatever kind of story, in whatever kind of way, and are limited only by the imagination of the author.

And it’s clear that Melissa de la Cruz knew exactly what type of story she wanted to tell, and had a helluva fun time telling it — which then translated into my helluva good time reading it. 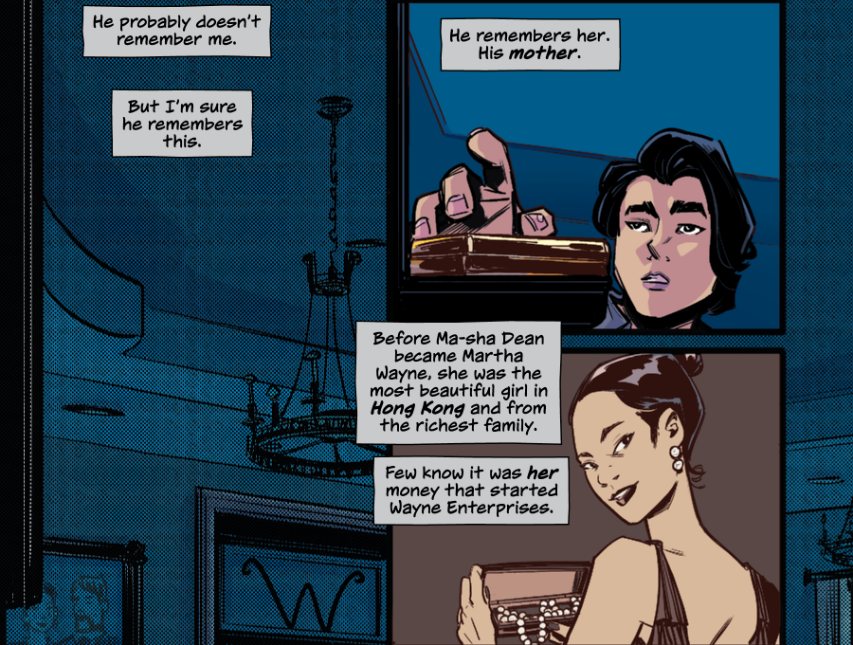 Taking The Joker, Bruce Wayne, Selina Kyle and Pamela Isley back to high school and giving them normal high school problems — well, ‘normal’ in terms of what we expect to see on any number of teen TV shows — was an absolute blast to read.

However, what I appreciated the most about Gotham High was the way in which Melissa de la Cruz took the idea of a re-imagined Gotham City and absolutely ran with it, giving us familiar characters and presenting them in brand new and wholly interesting ways.

While The Oracle Code and Shadow of the Batgirl kept most of the familiar beats of their respective characters’ backstories, Gotham High takes more of the approach adopted by Harley Quinn: Breaking Glass and uses the opportunity to reshape who the characters are and where they come from.

Gotham High gives us the kind of diverse range of characters that I can only dream about in modern day comics, with Bruce Wayne as a Chinese-American young teen, Alfred his gay uncle, Selina Kyle as Selina Garcia Kyle and Pamela Isley with a Korean-American heritage.

It’s a diverse mix of names and faces that you might see in any centrally located, metropolitan school — which is exactly what Gotham High would be — and it was refreshing to see these familiar characters represented in brand new ways.

There have been, of course, a measure of criticism levied against the re-imagined versions — which is, frankly, absolutely stupid.

DC Elseworlds stories have cast Batman as a vampire, Batman as a Russian freedom fighter/terrorist (depending on who you ask), and Batman as a Victorian Era hero on the tail of Jack the Ripper — but it’s a Batman with a mother from Hong Kong that’s a bridge too far? That’s absurd.

To me, changing the racial and ethnic identity of these familiar heroes and villains added a fun and fascinating new facet to the characters and their stories, and is something that I wish we’d see more of in mainstream, canonical comics.

But, as this is a complete non-canonical line of the comics, that makes it the perfect place to have completely different versions of our popular heroes. That Melissa de la Cruz was able to so deftly change so much about the characters, but still keep them recognizable is a real testament to her skill and talent.

Like I said before, Gotham High won’t be for everyone.

However, if you like new twists to classic characters, enjoy stories with fierce heroines and even fiercer friendships, and love watching The CW’s best teen TV shows, then Gotham High is absolutely for you.

Gotham High is available now. Be sure to order your copy from DC Comics, Barnes & Noble, Amazon, or your local independent bookstore. Also, don’t forget to add it to your Goodreads “to read” shelf!