Our Glee Christmas episodes list breaks down the many, many things the show got wrong. But they did manage to produce a few great covers of classic Christmas tunes.

Glee’s Christmas episodes follow a treacherous path. The first holiday-themed episode arrived in season 2. It was the perfect platform for the show to give rabid fans some tunes to get them through the holiday shuffle, while, arguably, producing the show’s most mainstream cover, “Baby It’s Cold Outside.”

The Glee Christmas episodes peaked in the first outing. “A Very Glee Christmas” was a jolly romp that payed homage to several classic movies and songs. It also kept the plot of the series moving along as Rachel and Finn rode the wave of their romance to its end point, Will and Emma awkwardly danced around one another, and Coach Beiste was given room to grow into the character we all love. 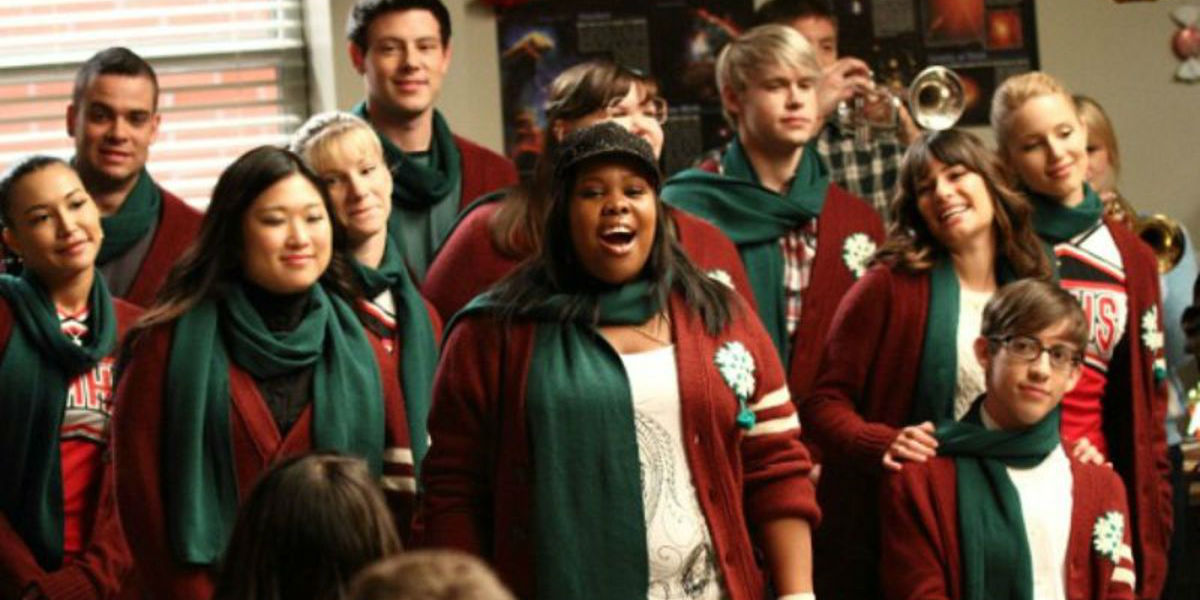 The tunes fit the characters from Kurt and Blaine’s early flirtations, to fueling Will and Sue’s hallway battles. The overarching story of How the Grinch Stole Christmas complimented the continued arc of Sue’s greed countered with her soft heart, the spirit of the McKinley underdogs, and Brittany still believing in Santa.

“A Very Glee Christmas” reflects all the best that Glee has to offer. And all it had to lose in the forthcoming seasonal ventures…

Give me an Amber Riley solo any. day. of. the. year. Apart from Riley’s incredible Mariah Carey cover, “Extraordinary Christmas” almost meets the mark set by the previous season’s holiday showing. Giving the New Directions an actual shot to make their mark on local television (remember the awful mattress commercial?) the series opted to offer them a Christmas special in the styling of The Star Wars Holiday Special and The Judy Garland Christmas Special.

This comes in conflict with Sue’s request that the New Directions sing at the homeless shelter is crushing as she does so to avoid the lonely holiday without her sister present. The episode served the perfect platform to have Artie direct, Finn to be a geek, and Rachel attempt to outshine everyone on screen, it also sets up a classic Glee plot line — do what is right, or follow what will bring you popularity.

And, of course, they find a way to make both events work. With the Christmas special airing in black-and-white during the episode, the group comes together to sing for the shelter and bring toys and smiles for everyone. Also, bonus points for an original number!

Honestly, all I remembered about this episode at first glance was that Chewbacca somehow made it to McKinley. But as I rewatched the episode, I came to realize that this one, is much worse than I remember. (I fully blame this on the fact that I am guilty of wearing Kurt and Blaine blinders during this time of my life.)

The episode is told in vignettes as seemingly written down by Sue. Artie has flash of what life would be like if his accident never happened, Kurt finds out that his dad is sick, Jake and Puck travel around LA pools singing about Hanukkah, and Brittany and Sam get married and believe the end of the world is nigh! 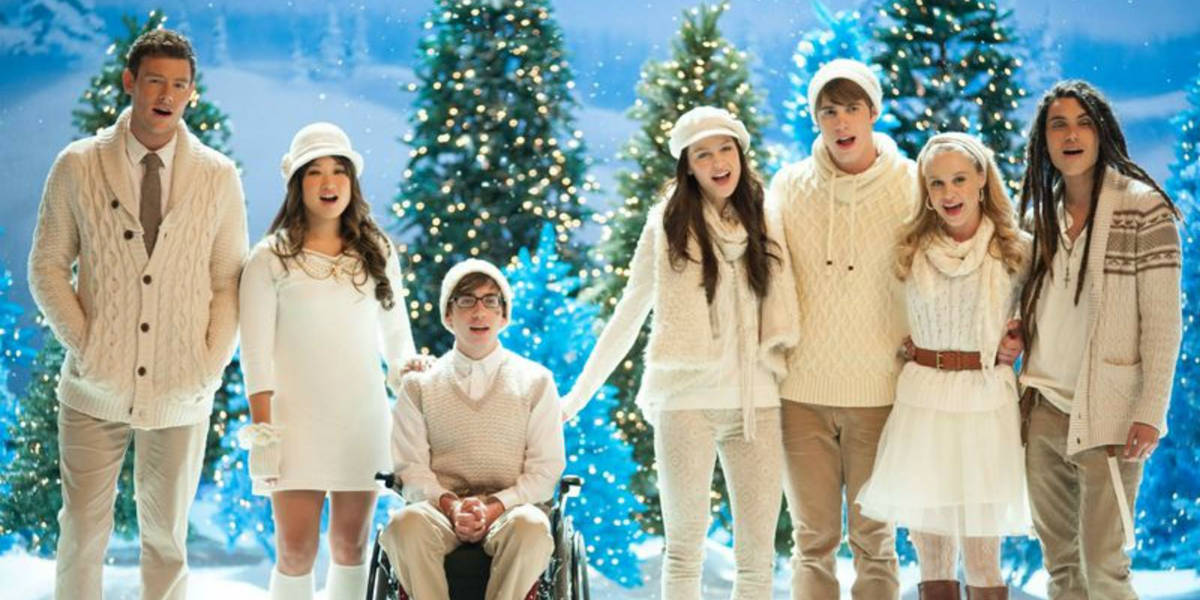 Woah. This episode suffers from the special type of Glee mania that rarely pans out in a season or episode. However, once again, the holidays find a way to allows Sue to steal the spotlight with touching moments involving a secret Santa and a final performance that slowly melts her cold heart.

This episode should have remained “unaired.” What a train wreck. It even comes with a warning from Sue at the top stating that Fox deemed the episode “too controversial.” Yes, I am aware that was written specifically for this, but it’s still true.

Nativity contests, drunken Santa escapades, and a rendition of the Chipmunk Christmas classic, winds up leaving some people unemployed, a store robbed, and viewers with a scene of Alex Newell giving birth to Jesus (which ironically winds up being the best song to come of the episode). Honorable mention to Becky being cast as baby Jesus. 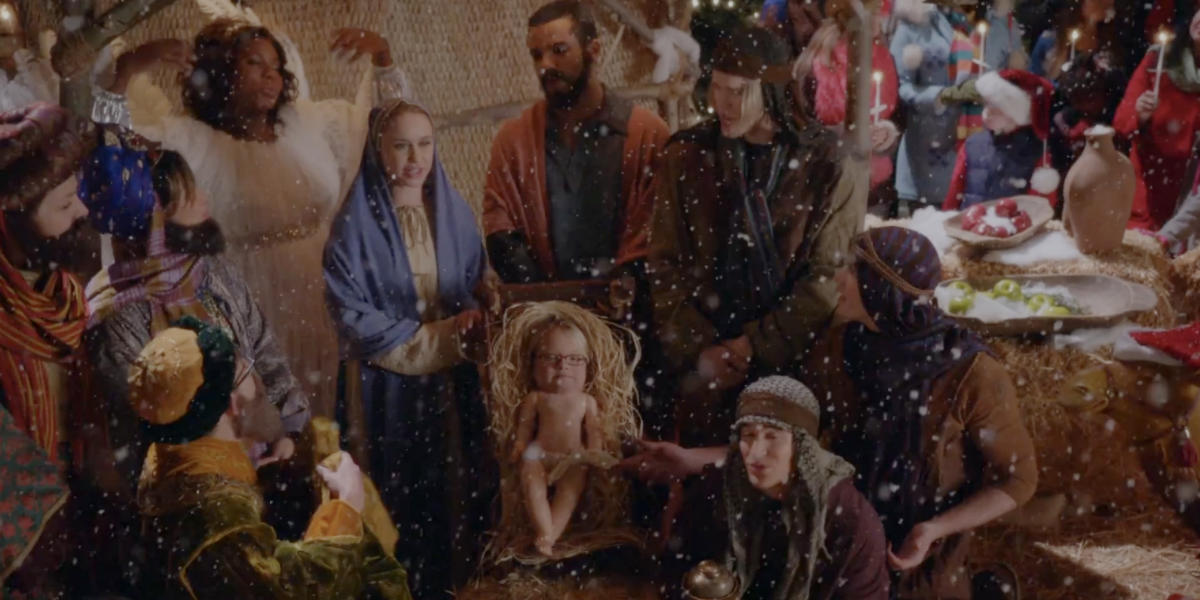 Honestly, I would skip this one all together and scan the song list. It’s truly a nightmare before Christmas. Perhaps it’s for the best that the Glee Christmas episodes ended here.

You can stream all the Glee Christmas episodes and more on Netflix!