We use cookies to ensure that we give you the best experience on Hypable. If you continue to visit us, we will assume that you are happy with it.
11:00 am EDT, May 3, 2021

Girls5eva is for anyone who still isn’t ready to let go of their dreams of being a teen pop star. Here’s our review of the new Peacock series.

Girls5eva tells the story of a former 90s girl group who have settled into far less glamorous lives since their music career crashed and burned after a particularly severe sophomore slump. When their long forgotten hit, ironically titled “Famous 5eva,” is sampled by rising star “Lil Stinker,” the group sees an opportunity to reclaim the fame of their youth.

Meredith Scardino is the creator and showrunner of Girls5eva, and Tina Fey, Robert Carlock, Jeff Richmond, David Miner, and Eric Gurian serve as executive producers. All of these people were also a huge part of the creative team behind Unbreakable Kimmy Schmidt, and that will not surprise you one bit when you start watching Girls5eva.

The two shows are incredibly similar in tone and in humor, so if you love Kimmy, this is probably going to be your next favorite show. Just like Unbreakable Kimmy Schmidt, Girls5eva offers endless optimism and joy coupled with quick and sharp situational humor on top of ample meme-worthy moments, lines, and jokes that are sure to become iconic, inextricable threads in the rich tapestry that this show is weaving that will hopefully continue for many seasons. 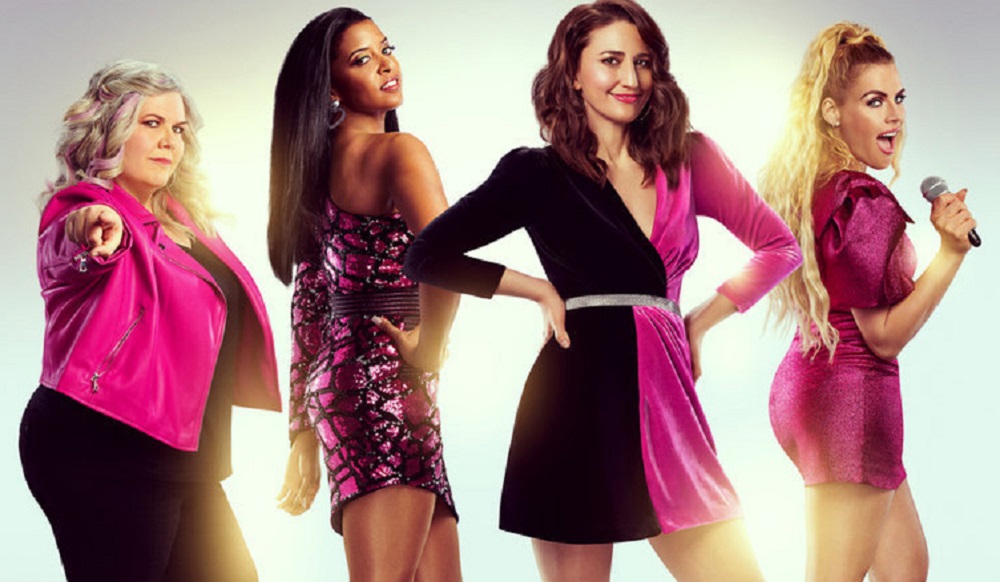 That being said, if you’re not a fan of Kimmy Schmidt, that doesn’t mean that this show isn’t for you. Although the tone is similar, the subject matter and characters are very different. Like all of the best comedies, Girls5eva manages to pull off being hilarious while having an incredible amount of heart. It does this by focusing on a well-developed, lovable, and exquisitely cast group of characters.

Busy Phillips, who people have fallen in love with for always being predictably real and very funny in shows like Freaks and Geeks, Dawson’s Creek and Cougar Town, is at her absolute best as Summer in Girls5eva. She strikes the perfect balance as the group’s resident “ditzy blonde,” making us laugh hysterically at Summer’s ignorance and innocence without portraying a one-note caricature. She’ll also keep you laughing as you root for her well-rounded and lovable character to better herself in many ways throughout the series.

Related: This Will Only Hurt a Little book review: Honest stories from Busy Philipps’ ‘sparkly’ life

Renée Elise Goldsberry dazzles as Wickie, the group’s most high maintenance member, showing that her comedic chops rival any high note that Angelica Schuyler ever hit in Hamilton. She’ll stun you with both her voice and her incredible narcissism in Girls5eva.

Wickie is the source of most of the show’s hilarious topical one liners that will undoubtedly be quoted and gifed for years to come. She may be the show’s least grounded character, but every group with a dream needs someone whose head is a little bit above the clouds, and Goldsberry embodies the character’s power and unquenchable passion beautifully. 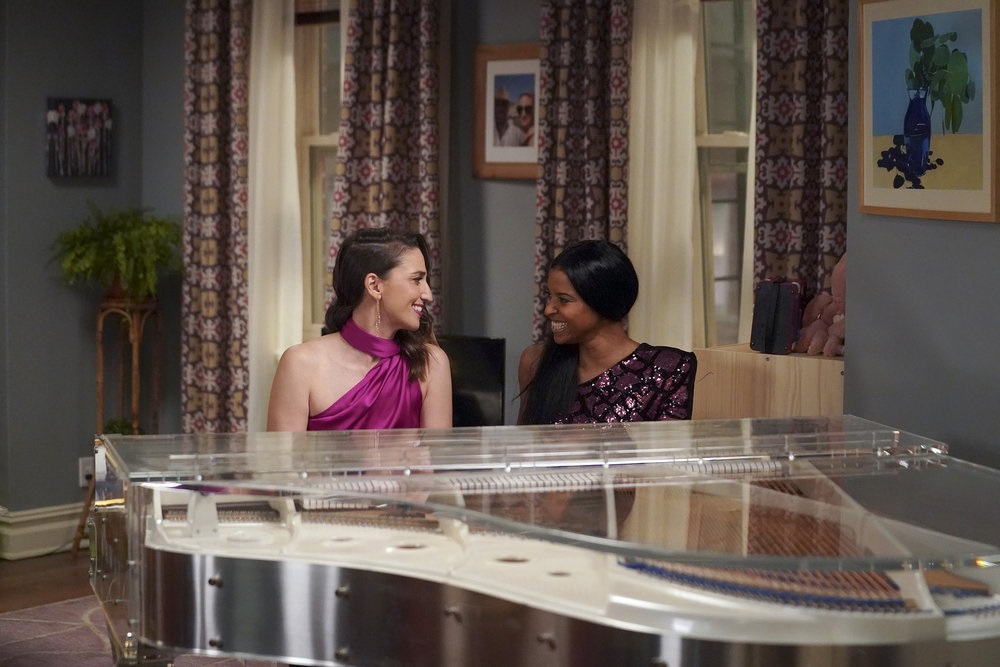 Although it’s nearly impossible to choose, Paula Pell’s Gloria just might be my favorite character in Girls5eva. Somehow Pell even makes being a dentist hilarious, and watching her balance her practice with her reemerging pop persona provides some of the show’s biggest laughs. On top of bringing so much of the humor, she’s also the root of a lot of the show’s heart, becoming a friend and mother figure to Summer, dealing with her own heartbreak, and reminiscing about coming to terms with her sexuality in the 90s.

After watching Girls5eva for this review, it’s completely insane to me that Sara Bareilles has never been the star of a TV show before. She’s already proven she’s far more than a popstar by writing the music and lyrics for the Broadway musical, Waitress, and eventually starring in the production, and now Girls5eva is finally showcasing her immense talents to a wider audience.

As Dawn, Sara Bareilles is kind of the group’s “every woman.” She’s a little bit awkward and doesn’t always feel like she belongs, but her talent speaks for itself and her passion makes her persevere. Even though Bareilles isn’t necessarily known for her comedic prowess, she’s just as funny and sharp as the rest of the cast and is a standout in every scene she’s in. The storylines involving her family are some of the most genuine of the series, and she carries them perfectly.

You also get to hear so much of Sara’s gorgeous voice in the show. It’s somehow just as breathtaking even when it’s singing words like, “we’re gonna be famous 3gether, ’cause that’s one more than together.” 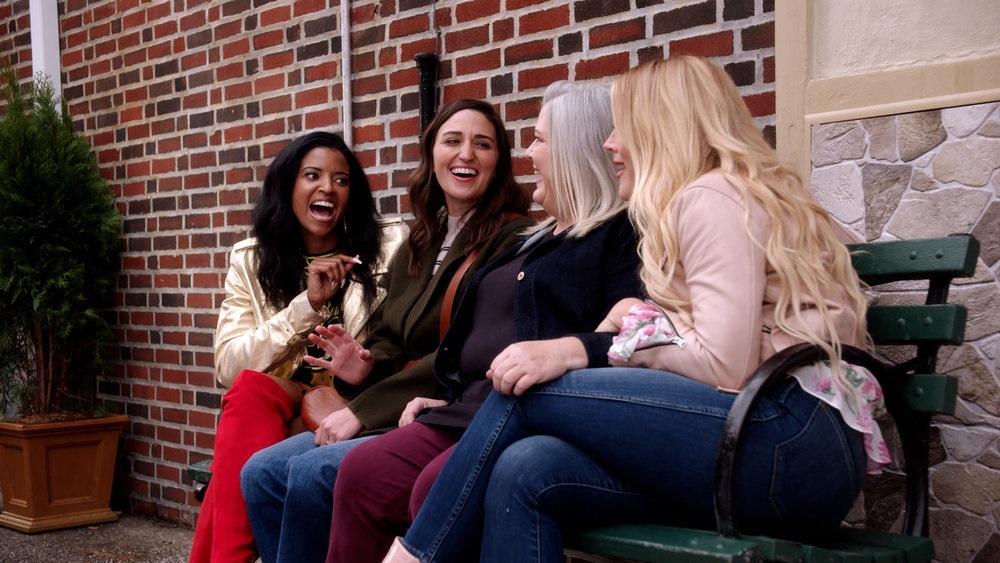 While it’s not as big a factor as you might expect, Girls5eva does offer a little taste of nostalgia for those of us who obsessed over, and/or are still obsessing over 90s pop groups. The music video esthetics, the bad contracts and even worse managers, the legendary romances between pop icons, the songs that really don’t hold up when you listen to them as adults…the show has it all.

Finally, just like the iconic girl group the show has obviously been inspired by, Girls5eva is brimming with “girl power.” The friendships that grow and blossom between the girls, particularly between Gloria/Summer, and Wickie/Dawn, are so well-written and authentic. The fervor and relentlessness with which they chase their dreams and surmount obstacles is also downright inspiring, and I challenge you to walk away from Girls5eva without a huge smile on your face and a little fire in your heart.

Check out the trailer for Girls5eva below, and catch all eight episodes of the series on Peacock on Thursday, May 6! And let us know if you agree with our Girls5eva review in the comments!