We use cookies to ensure that we give you the best experience on Hypable. If you continue to visit us, we will assume that you are happy with it.
4:30 pm EDT, September 25, 2019

HBO, stop playing coy and make the Dance of the Dragons ‘Game of Thrones’ prequel already

Recent news about a second Game of Thrones prequel series raises hopes for a particular slice of Targaryen history.

Given the overwhelming popularity of HBO’s most-viewed series (which recently took home Best Drama at the Emmys) it’s not surprising that the network has dedicated its resources to finding the next stop on the lucrative Thrones train. The open fields of Game of Thrones prequel series are rife with potential — but also, in typical Thrones fashion, many dangers.

How to best strike recreate the perfect storm of magic and politics, intimate characters and global conflict, brutal deaths and hot-sexy-sexiness, is a question that HBO is clearly taking seriously. Having commissioned five different pilot scripts for the hotly-anticipated Game of Thrones prequel project, the network chose first to move forward with Jane Goldman’s story of a primal Westeros, set thousands of years before the events of the original series. Dubbed “Bloodmoon” in the production phase (though Executive Producer George R. R. Martin refers to it as the legendary “Long Night,” the series will star Naomi Watts and Josh Whitehouse.

I look forward to seeing what magic Goldman can work with her Game of Thrones prequel, especially as (from the little we know) the story seems to center exponentially more women and people of color than the original. Goldman is in truly unknown territory, and that is definitely appealing — especially as more information be provided on the eldritch mysteries of Game of Thrones.

But this latest news that Ryan Condal and George R.R. Martin are moving forward with another Game of Thrones prequel based on Martin’s Targaryen history, Fire & Blood pushes the first series to the back of the two-concept queue for me. Directly from Martin’s crazy-genius mind, this is material that feels inevitably bound for adaptation, each movement branded with his stamp of drama as personal as it is political, and as real as it is magical.

Fire & Blood Vol. 1 tells the story of the Targaryen conquest of Westeros by Aegon the Conqueror, and the several tumultuous generations that followed. The story climaxes in another telling of the Dance of the Dragons, a ravaging Targaryen civil war that decimated the continent, and all but wiped out the family’s stable of dragons. (In case you were wondering, Martin doesn’t get anywhere near Mad King Aerys and Robert’s Rebellion here; he claims that Fire & Blood is meant to be a set of two books, but the first volume only covers about a third of the dynasty, so… okay man. Sure.)

The early part of the history is more challenging to adapt, as Martin sketches broader strokes of Aegon I, his sisters and wives Visenya and Rhaenys, and their immediate offspring. There is plenty of battle and intrigue, and suggestions of the depth beneath the surface of these larger-than-life figures — though much of it remains unexplored. An adaptation tackling the Targaryen reign from the beginning will have plenty of raw material, but will need to add more than a few finishing cinematic touches.

But as Fire & Blood progresses, Martin begins to luxuriate in the full degree of his genius in character, conflict, and world building. The 55-year-long year reign of Jaehaerys and Alysane, grandchildren of Aegon I, is detailed with the endless sacrifices of preserving a realm at peace — and even more importantly, it’s teeming with some of the greatest and most intricately-drawn characters Martin has created for the world of Game of Thrones.

Jaehaerys, the stalwart and wise, who transformed the realm at the cost of his own children. Alysane, his sister-wife, whose love for her king could not distract her from the quiet wreck made of their family. Their sister Reyna, once meant to be queen, whose life becomes a series of betrayals and loss after she’s abandoned by the woman she loves.

There are obviously more, as this is George R.R. Martin, and bounties of drama to explore on screen. But even this is mostly careful prelude, building pressure in the bottle of Westeros where family violence is kept corked by dragons, until the strain becomes too great.

The Dance of the Dragons, the war that explodes between Jaehaerys’ great-grandchildren, reads like is has already been written for the screen. It’s far too complex to break down entirely, but the action begins when the growing factions of House Targaryen finally splinter over a contested succession. The king has died; should the Iron Throne go to his oldest daughter, named as his heir? Or to his son by his second wife — a woman hell-bent on seeing her son rule Westeros?

Every act of the Dance of the Dragons is simultaneously intimate and colossal. The personalities of the warring princess and prince seethe off the page, while the family and courtiers around them push circumstances into territory that would be violent enough if each side didn’t have a full cadre of grown and rideable dragons. 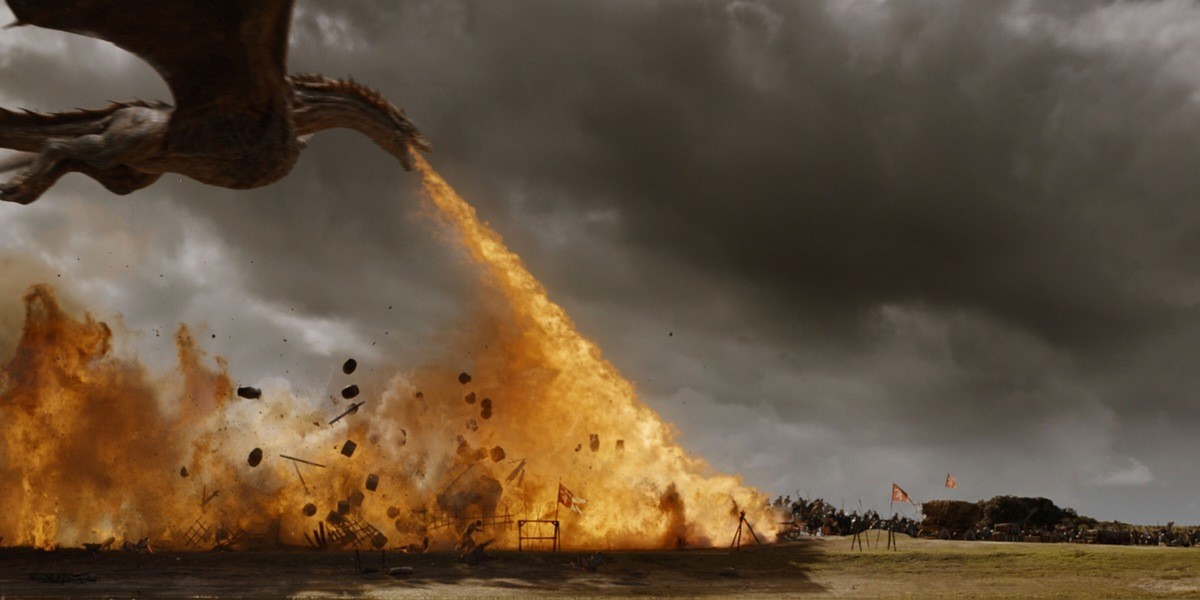 Brother fights sister. Cousin murders cousin — in midair. Assassinations alter the course of the war, and the survivors’ lives. Dragon meets dragon in epic, otherworldly combat, and the stakes are at once as grand as Westeros, and as small as a festering family squabble. The detail, derangement, and devices Martin uses to tell his story are breathtaking, the factions each so realized that the A Song of Ice and Fire still debates which party had the better claim — and which atrocities should disqualify them from the bloody game.

I understand why fans might be skeptical about such a deep exploration of Targaryen history. For one thing, the second you reference Fire & Blood (a 700-odd-page treatise worthy of Tolkien’s verbosity), we’re immediately in uber-geek territory. This is a very large swath of historical time that might seem pointlessly impenetrable. (And… yeah, some of it is, I’ll fully admit.)

Then, there’s the fact that it feels like this ground has been trodden before — after all, didn’t Game of Thrones give us quite enough about House Targaryen, their inherent madness and their inevitable downfall? We’ve seen how that story finally ends in the form of Daenerys, dying with blood, fire, and a whimper. Why rewind to the beginning of this gloomy tale?

Another issue: Targaryens are often not the most likable of Houses. I’m not a huge fan myself — the ancestral God-complex gets grating quickly, their arrogance is staggering, and you’re never more than a few cousins away from a psychopathic monster.

The drama tears through the way power works when the authority of dynasty blends with overwhelming force, how families are built and disintegrate and recombine. How greed can double as generosity, how leadership becomes a thing that is owned, rather than owed, and the catastrophe of both complicit silence and the collision of two immovable forces that happen to be dragons.

Yes, this is largely acted out by dragon lords on the canvas of their freshly-birthed country (though there are plenty of Baratheons, Arryns, Lannisters, and even a few really badass Starks to round out the adventure.) It’s pretty clear that House Targaryen is a massive source of inspiration for George R.R. Martin, even as fans may have other favorites. But the fact is that his best work carries the same stamp, regardless of which House it regards.

Conflict, pressing and internal, that spills out into the world with drastic consequences. Characters who we intimately understand with merciless clarity, whether we love or despise them. And a breathtaking realism that redrafts the colossal magic of fantasy into something so honest, it feels like it must, in some alternate realm, have really happened.

That’s what makes Fire & Blood so deserving of its hopeful place as a Game of Thrones prequel. All of the ingredients for success are already in the pot, just waiting for HBO to turn on the heat and serve us up something delicious. To me, it seems inevitable — I only hope HBO agrees.

What do you want to see in the ‘Game of Thrones’ prequels?