We use cookies to ensure that we give you the best experience on Hypable. If you continue to visit us, we will assume that you are happy with it.
2:14 pm EDT, September 24, 2019

Female-led ‘Arrow’ spinoff in development at the CW

Arrow may be headed into the final season, but the stories set in its world are far from over.

After eight seasons, Oliver Queen will be hanging up the green tights and bow and saying goodbye to Star City.

However, it looks like Arrow fans will be able to stick around for more superheroics set in the world of Arrow — only this time, headlined by three powerful female heroes.

Deadline reported this morning that that the CW is currently developing an Arrow spinoff that would tell the story of three of its female characters: Katherine McNamara’s Mia Smoak/Green Arrow, Katie Cassidy’s Laurel Lance, who played the Black Canary in the first four seasons of Arrow and Juliana Harkavy’s Dinah Drake, who played the Black Canary from the fourth season on.

The series should come as no surprise, as CW president Mark Pedowitz hinted at a spinoff series set in the Arrow-verse back in August.

“Nothing is ever 100 percent done,” he told reporters at the time. “You learn that over time. There’s a possibility, but we haven’t had a discussion about what that storyline will do as [we plot the] next generation [of DC shows]. There is another property we’re looking at for the following season.” 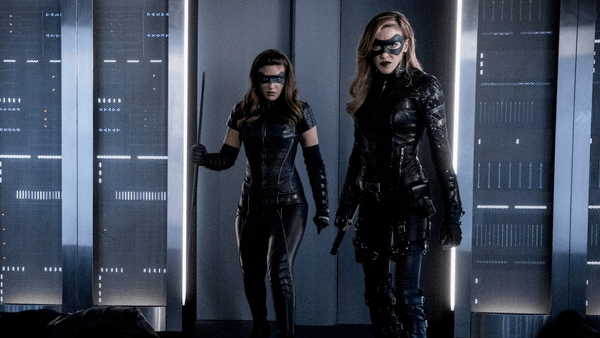 Katherine McNamara first arrived on the scene in season 7 in the recurring role of Mia Smoak — a rough and tumble street fighter who became a rebel leader of sorts. Through the course of the season, viewers found out that she was Oliver Queen’s daughter. McNamara was promoted to a series regular for the eighth and final season.

The potential Arrow spinoff series will air as a backdoor pilot during Arrow’s final season. The episode will be co-written by Showrunner Beth Schwartz, along with arc Guggenheim, Jill Blankenship and Oscar Balderrama. It will be executive produced by Greg Berlanti, Sarah Schechter, Beth Schwartz, Marc Guggenheim, Jill Blankenship and Oscar Balderrama.