We use cookies to ensure that we give you the best experience on Hypable. If you continue to visit us, we will assume that you are happy with it.
6:30 pm EST, January 31, 2019

The first season of The Dragon Prince had us asking many, many questions about where the show might go next. But we also have some theories, too.

There’s nothing quite like theorizing over your favorite show. The Dragon Prince‘s first season provided just enough of a taste of the wider world for us to draw from to piece a few clues together, and come up with some ideas of where certain story elements might be heading next, and we wanted to get them down before the second season premiered.

That way, we can either have a moment of triumph, should any of them prove true, or laugh at how obvious and wrong we were down the line.

So, here are four theories we have about The Dragon Prince, based on what we know from the first season.

As soon as Rayla admitted in episode 5 that her parents were not only alive, but betrayed the Moonshadow elves by abandoning their post on the night the dragon prince was “killed,” I knew immediately that there had to be more to that story. Though I didn’t form a theory until the finale, something wasn’t quite sitting right about Rayla’s assertion that they ran away.

Everything we had learned about Moonshadow elves up until that point — particularly with their binding ceremony — is that they are honor-bound, and believe heavily in justice. That they would disappear, without a trace, leaving the humans free to presumably destroy the egg of the dragon prince was at odds with everything about Moonshadow elves. It wasn’t until Viren used his coins to scare Runaan into telling him what he needed to know about the mirror that the wheels began to turn on what really could have happened to Rayla’s parents.

They are trapped in Viren’s coins.

Runaan’s face, upon seeing some of the beings caught inside the coins, was one of recognition. From both an AMA chat on reddit, and the end credits of The Dragon Prince, we know that Runaan is close to both Rayla and her family. It would make a perfect kind of sense that their disappearance was not because of a betrayal, but Viren’s Dark Magic.

With Runaan also trapped in a coin, and with little to no way of knowing whether it’s reversible, we may not learn the truth of who Runaan saw that would cause him to react the way he did.

But, down the line, if Runaan and the others trapped in Viren’s coins are freed — and Rayla’s parents are among them — it would provide and interesting twist to Rayla’s story, and potentially lead to a very interesting reunion.

“Dark Magic is bad” might not sound like a radical theory (we did, in fact, notice the name). But Dark Magic in The Dragon Prince doesn’t just seem to be bad in the cosmic sense; it seems to be bad specifically, and very consequentially, for the mages who practice it.

Exhibit A: Viren’s cracked, dead-seeming, ice-like face that appears in the dungeons in episode 9, and as a looming terror in the final moments of the season. That suddenly alien face seems like a significant change from our previously pale (and irritatingly hot) Lord Mage… but is it really a shift, or in fact, a return to his normal state?

Well, in episode 5 of The Dragon Prince, Viren performs a spell involving a trove of luminescent butterflies hidden in his chambers. Throughout the process, his face is hidden and his skin cast in shadow, but his eyes glow livid from the darkness. This unseen act of magic (which, of course, involves killing one of the butterflies) clearly seems to revive Viren, letting off a purple glow that later seems to burn in his eyes. A similar glow appears in his eyes after the scary face makes its first appearance — specifically, after the massive investment of magic involved in trapping (and perhaps killing) Runaan inside the face of a coin. Another piece of evidence is suggested in the opening moments of The Dragon Prince, as the origin of Dark Magic is explained. The unnamed human mage who discovered this power also glows with purple light, and performs a spell that casts very familiar shadows across his face.

So what does this all mean? Well, we posit that Viren is now so deeply in the grip of Dark Magic that the power has not only altered his physical appearance, but perhaps even his personality. While we don’t have much by way of comparison, Viren’s ruthlessness regarding the missing princes, Runaan, and even his own children is remarkable even for a Machiavellian politician. We think Viren has been corrupted by his magic, and that there are probably even darker consequences (no pun intended) still to come.

This theory is also potentially important insofar as it concerns Claudia. At this point, Claudia doesn’t seem to be suffering any ill-effects from her use of Dark Magic, or even be aware that’s a possibility. But how long will that state last? Could Claudia, too, come to change under the influence of her magic? Will her mind be twisted along with her face, as her father seems to be? What effect might this have on the otherwise happy-go-lucky nerd as she pursues the path that Viren has laid out for her? What will the consequences be for Soren, and for Callum and Ezran? When Bait comes to bite, is there a way back from Dark Magic?

That might just be the question that The Dragon Prince needs to answer most.

Harrow’s soul is trapped inside Pip, his bird — Donya

This one feels like an obvious theory — and one that most The Dragon Prince fans likely have — but King Harrow’s soul being trapped inside of Pip was the first theory I had for the season.

It makes a ton of sense, after Viren introduced the dual-headed snake, and the possibility of saving the life of his longtime friend. Though Harrow refused to resort to Dark Magic, and an argument escalated between the two, we never saw Harrow again after Viren emerged from his chambers. 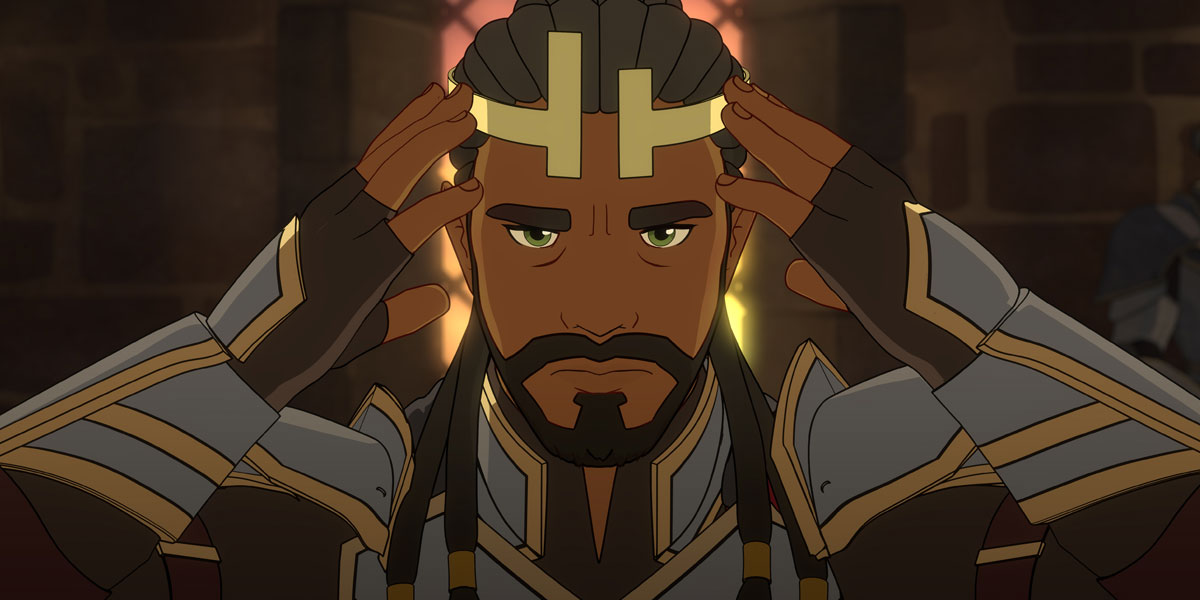 Harrow’s body, ultimately, must have perished — in order for the Moonshadow elves’ binding to release — but the fixation, and conversations, that Viren had with Pip after Harrow’s “death” were incredibly suspicious.

And no matter what was said behind closed doors between Harrow and Viren, the two were still close, and still loved each other. Viren — as we know — is very set in his ways when it comes to seeing his plans through, and him “saving” Harrow, and proving his plan correct, is one I could certainly see him carry out no matter what, if only for his own satisfaction.

Whether Harrow’s body could be retrieved, should this theory prove true, remains to be seen — though, my money is on the fact that his soul will need a new “host” body — and could complicate matters like the line of succession.

But, for now, we’ve got one eye on Viren, and another on the bird…

Though Callum was born of two humans — that we know of — there is something niggling at me that all is not as it seems with him. Callum’s affinity for magic, and his connection to it, feels more natural than that of the magic humans can perform.

We’ve been told humans can’t connect to primal sources — outside of a conduit, like a stone — and thus have to resort to Dark Magic, but that doesn’t feel like the whole story when it comes to Callum. So, perhaps, somewhere in his bloodline — prior to his parents — there is some elf in him. Removed enough that there are no longer any physical elven attributes to his appearance, but just enough that, should he be able to tap into it and look within himself, he might actually be able to perform a natural form of magic.

And, really, it would make him an interesting foil to both Claudia and Viren, who rely heavily on Dark Magic, as a human that can connect to a primal source. Because, if anyone can manage to do it, I believe it’ll be Callum.

Do you have any ‘The Dragon Prince’ theories?

by Irvin K
by Pamela Gocobachi

Miles Teller will tackle the making of The Godfather for his next big role.

Our Lucifer season 5, part 2 review is spoiler-free and discusses the penultimate season of the hit show from Netflix, starring Tom Ellis and Lauren German.

If you miss Schitt’s Creek and Alexis Rose as much as we do, you’ll love the journey that these Alexis Rose quotes take you on.

Casting for HBO’s The Last of Us series is picking up steam— and the series’ latest recruit comes in the form of an actress that’ll be all too familiar to fans of the video game.

Looks like Danai Gurira will be sticking around as part of the Black Panther franchise.