Now that the finale of Telltale’s choose your own adventure has hit, we are all asking ourselves one burning question: come the end of the story, does Clementine die?

Telltale’s TWD ran for seven years, and saw Clementine go through many trials and tribulations to get her to the final episode of the series. She’s a fighter, and has always survived, even when the odds were stacked against her.

Having learned how to survive under the guidance of Lee, Clementine has had quite the go ever since her protector died at the end of the first season. Depending on story choices, she may have lost a finger to a car door, had to sew up her own arm after a horrible dog bite, and suffer a pretty hefty head injury in a car crash. Unfortunately, her struggle only became even more difficult in the final episode of Telltale’s The Walking Dead, titled “Take Us Back.”

Clementine fights for her life

As the series wrapped up its final plots, Clementine found herself locked in a battle for her people against a season one antagonist, a turncoat named Lilly. At one point, Lilly takes pity on Clementine, if you work the conversation right. However, there are some pretty harrowing situations for the two women, leading to an explosion on a docked boat. 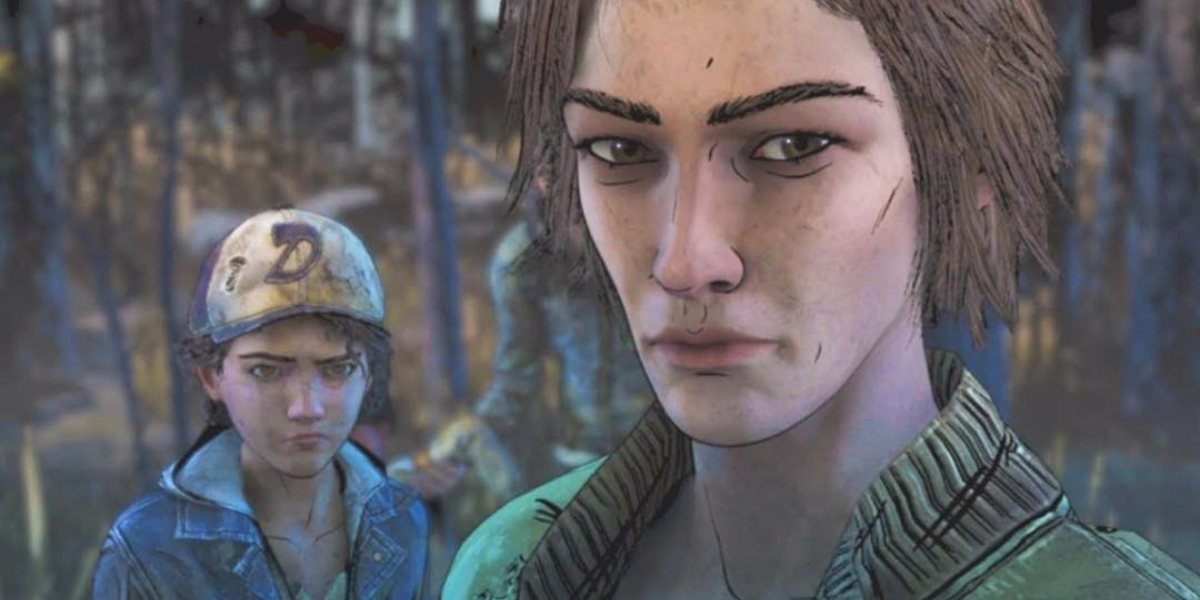 In a final standoff, Lilly and Clementine aim their respective weapons at each other. Lilly knows that if she shoots Clem, AJ will end the enemy. Does that stop Lilly from killing Clementine? As the events unfold, Clementine is the one that has the decision of whether or not to kill Lilly.

Coming out of the battle against Lilly’s crew mostly unscathed, Clementine witnesses Minnie, a new character in the final season, being mauled by a herd of walkers. Minnie is partially a victim of her circumstances, but made some poor choices that led up to her demise.

See, Minnie and her twin sister Sophie were abducted by Lilly’s forces, and then were trained as soldiers to do battle with rival communities. At one point, Minnie and Sophie staged an escape, but when they were caught, Minnie decided to kill her own twin sister. 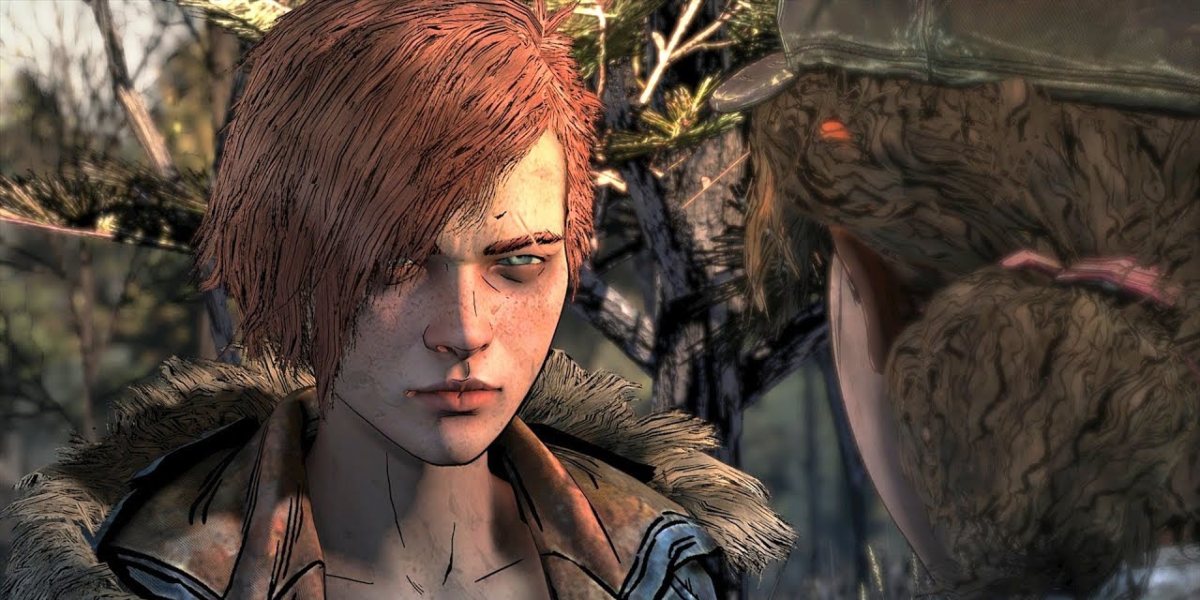 This grievous decision took its toll on Minnie, as after the boat explosion, she doesn’t seem to know when it’s time to run from the walker herd. With her face half chewed off, Minnie is left for dead by Clementine.

Clementine, AJ, and friends all narrowly escape the walker herd surrounding Lilly’s community, but unfortunately, Minnie hasn’t had her last stand. Completely maddened by rage, loss, and the walker virus, a dying Minnie tracks down Clementine in an attempt to take younger brother Tenn down with her. 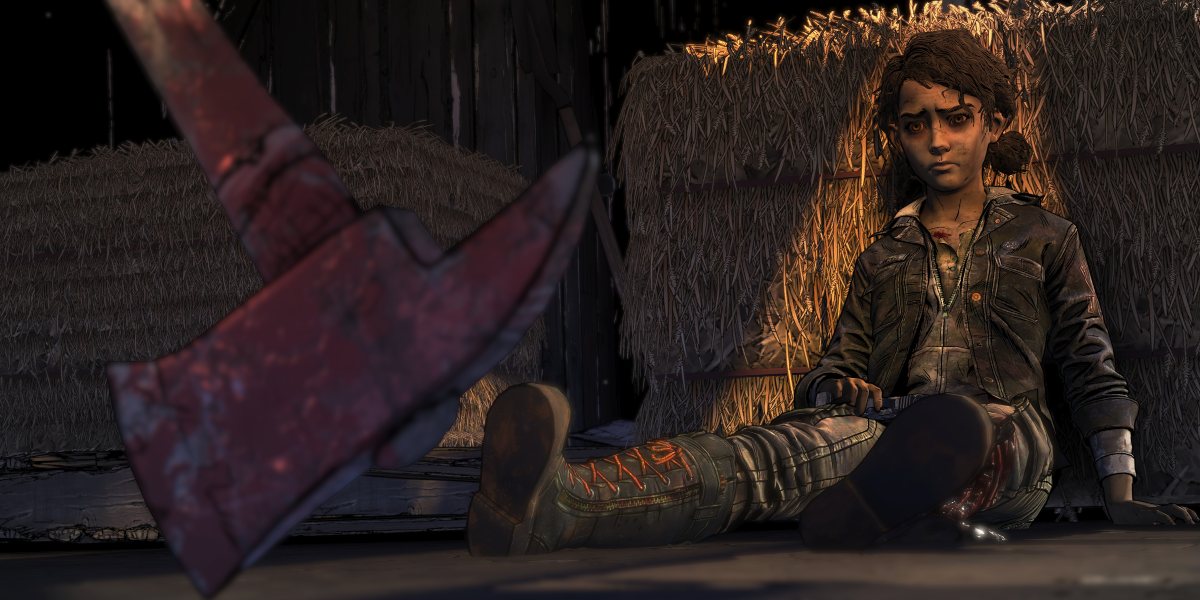 Minnie walks amongst the walker crowd, dodging Clementine’s arrows. Wielding an ax covered in walker viscera, Minnie slices down on Clementine’s left shin. Wincing through the pain, Clementine (and whoever lives past the decision-based events, save for the plot armored AJ) scrambles away from the now feasting walkers.

Limping as fast as she can, Clem has AJ help her climb up a small cliff to escape the walker herd. As she reaches for AJ’s hand, a walker bites down on her dangling and damaged left leg. She’s wearing a boot, but Minnie’s attack split open the leather material. 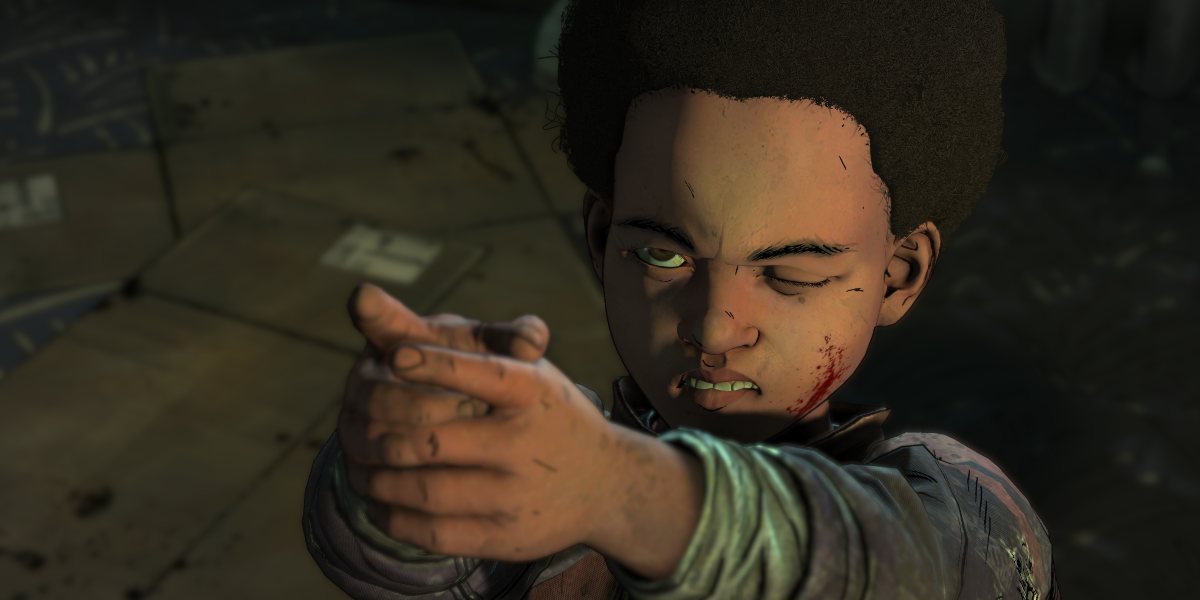 Sitting at the top of the ledge, Clementine slowly, painfully pulls back her sliced boot to get a closer look at the walker bite. Yep, she was bitten. She tells AJ to run for his own life, but stalwart and loyal to his protector, AJ drags her into a nearby barn.

Struggling to remain alive, Clementine instructs AJ on how to close off the barn from the walkers. Bleeding out from the ax wound and dying from the walker bite’s infection, Clementine can either ask AJ to ax her in the head, or leave her to turn.

The ax comes down with a *TWACK*, and the scene cuts to black.

We’re then thrown into the McCarrol ranch flashback, wherein we witness Clementine take the life of a caretaker for infants at the community. It was a disturbing event that still haunts Clementine, but it was the only way to save AJ from the burning wreckage.

As the flashback plays out, Clementine looks at the shivering and frightened boy, knowing that she will always have to protect him with her life. The scene ends, and Clementine’s story comes to an end.

So does Clementine die at the end of Telltale’s ‘TWD’?

Time jumps forward a bit to AJ hunting fish at their community’s local river. Now, AJ’s making all of the tough decisions. Where is Clementine? AJ is invited back to the boarding school community for dinner, as a sunset wraps up the final scenes of the series.

Still, she persists. As it turns out, Clementine didn’t die at the end of TWD. AJ hacked off her mauled and bitten leg, and then (apparently) cauterized the wound to prevent her from bleeding out. AJ was able to get her back to the boarding school in (mostly) one piece, leaving our series protagonist disabled, but still very much alive.

The events that we didn’t see were detailed on a Tumblr post written by Kent Muddle, a director for Skybound Entertainment’s production of Telltale’s The Walking Dead.

Ok we know how AJ saved Clem by cauterizing her leg, right? So is it possible that the heat from it sorta killed out the spread of the bite? Possibly, but what really saves Clem is the small amount of time between bite and amputation.

So there you have it. While the hashtag #StillNotBitten no longer applies for Clem, she does, indeed, survive the end events of Telltale’s The Walking Dead, regardless of the player’s decisions.

What was your initial reaction to the end of Telltale’s ‘TWD’?