‘Dangerous Alliance’ book review: An Austen-inspired romance with an edge of mystery

Jennieke Cohen’s Dangerous Alliance: An Austentacious Romance breaks the mold of Austen-adaptations with a captivating romance (and mystery!) that asks, “What would Jane’s heroines do?”

One of my favorite moments in reading any form of romance is the arrival of a character you find the protagonist is firmly against, but with whom you are mildly obsessed. And if this feeling has ever made you gasp, left you grinning with excitement, kicking your feet, then you must pick up a copy of Dangerous Alliance by Jennieke Cohen immediately.

Victoria Aston is not one of these girls. She not only has a perfectly respectable dowry but finds herself content to stay aloof from the social scene for some years, preferring a life of assisting with the responsibilities of her family’s estate. However, after an incident involving the future of her family’s inheritance and where it will fall, she finds herself wrapped up in engagements at the start of the social season.

Also setting out for a turn in the social scene is Thomas Sherborne, the Earl of Halworth. The neighbor of Victoria who spent most of his youth as her playmate and best friend, Tom was exiled for five years by his father and only returned following the man’s death to inherit the failing estate of his family. Almost an entire year had passed before he ran into Victoria, saving her life at the start of the novel and growing ever tired of her and his brother’s attempts to ruin what is left of his patience and kind heart.

Gowns, walks through London, creamed ice and more than one afternoon spent with questionable company, set Vicky as less like Emma Woodhouse and more like a charge of the tilter Austen character. Set against a backdrop of an evolving mystery that threads its way from the outset of the novel through the family drama at the heart, Dangerous Alliance does have one key ingredient for fans of the aforementioned author — a web of potential candidates for courtship.

Of course, some standout as clear contenders (ie, you know they will be bad) while others are doomed from their introduction to not live up to societal or family scrutiny (ie, you would die for them if someone even looked at a hair on their head wrong).

Cutting seamlessly to showcase the points of view of Victoria and Tom, Dangerous Alliance flirts with all the elements that could weigh a story down, offering instead a story full of surprises and nostalgia like the first time you picked up your favorite novel.

Making good use of the phrase, “an Austentacious Romance,” the novel hangs its bonnet on each of those words. Perhaps my favorite feature of the work is that it is not trying to subvert instances where it draws from the pages of four of Austen’s novels. Instead, you meet a girl who sees herself and her world reflected in detail, a version of her story told through the eyes of another woman. She is inspired, cautioned, and driven by not only Austen’s characters, but by the author as well.

Victoria does not hide the fact that she is a person who does not fit into any character description on the page. She likes to wear pants, ride horses around the estate, do the jobs that need doing to help ensure her family’s well-being and what that status affords the people who work for her estate. Her status affords her certain privileges, but also certain restraints. The same goes for Jane Austen. It’s what these two women do within those confines and the moments they calculate to step outside of them that make them equally compelling figures with whom you wish to spend a little time. 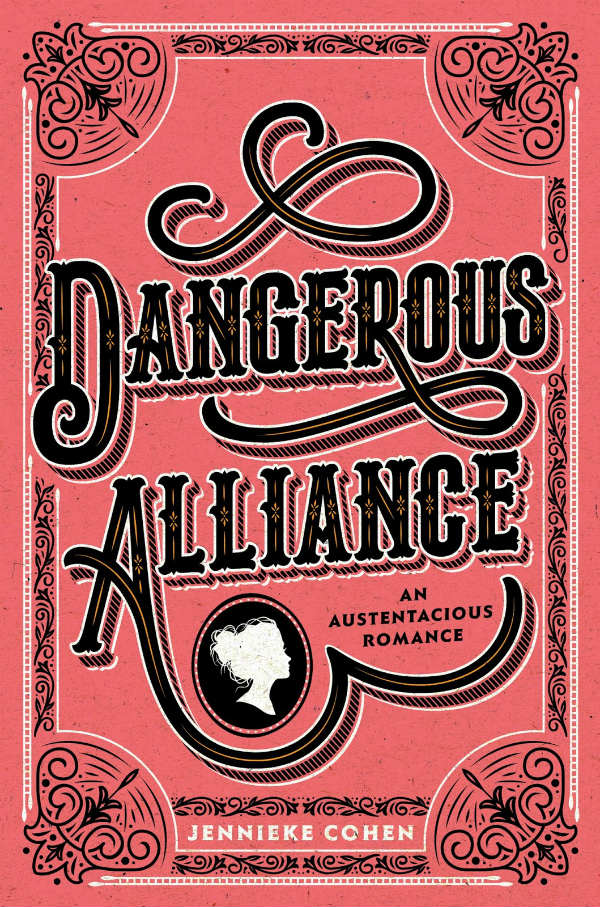 About 14 pages into Dangerous Alliance, I was overcome with the desire to brew a cup of tea, sit in front of a fireplace, and devour it in one, long continuous read. Minus the fireplace and the occasional break to make several cups of tea and move from couch, to chair, to couch again, that is exactly what I did.

I devoured all of Austen’s novels much in the same manner, one that is not unlike that of our heroine, Victoria. With each one, I was firmly decided on which traits were admirable, which traits were detestable in each woman, and which men I would feign a dizzy spell, if only to have them catch me in their arms.

Though Elizabeth Bennett, Emma Woodhouse, and Fanny Price did less to inform my social behavior and more to fill my idle weekend hours, to this day I can attribute their traits to any number of characters I come across in both period and contemporary pieces. But here in Dangerous Alliance, Victoria does the work for us. She examines her social scene through the lens of the characters from the pages of her favorite books, carefully selecting which persona will produce the best results.

At the first instance of this, I was wary that the novel would try too hard to force each character into a mold built by another writer. I’ve read far too many Sherlock Holmes adaptations that fall into this trap. But Dangerous Alliance does not use Austen as a crutch. As Victoria’s sister says to her, “This is no novel, Vicky. This is our lives.”

It is very much about the circumstantial moment in these characters lives. And although this is still very much a historical romance told with the trappings of societal laws and prejudices of the early 1800s, Dangerous Alliance tells a modern story. Countering the light-hearted fandom elements of Victoria’s love of Austen, there is a story about friendship, love of family, and the fear that comes with taking a stand.

And of course, there is enough romance to make your heart flutter. Take for instance, the first ball of the season. Victoria, firmly set to go about the evening looking for potential suitors as part of her obligation to her family, finds herself swept up in conversation with Mr. Carmichael, a 25-year old who has amassed a fortune in business dealings but has no formal title to his name. Once left unchaperoned, the banter between Victoria and Carmichael becomes colorful, riddled with teasing and a strong desire to not focus on polite catch-up. “Perhaps we could discuss the even more enthralling topic of the weather,” is a line that I will be borrowing from now on.

And as conversation lends itself to plant you firmly in this pairing’s corner, the return of a neighbor whose past has not yet been revealed is announced at the ball and everything changes. I’ve decided after reading this single passage that unexpected arrivals at the top of a staircase at Regency-era balls where every head turns towards the guest is my reading weakness.

Just as you find yourself wrapped up in a montage of bad afternoon outings (how Dangerous Alliance managed to pull this off on a page is still blowing my mind), the reminder that something evil is afoot, sticks another pin in the cork board of the mystery you forgot about.

Finally, the story keeps family near its heart. So many secrets exist behind closed doors for Tom and Victoria — the explanation behind Tom’s exile, the circumstances around Victoria’s sister — you’ll want to go back and reread Dangerous Alliance from the start to examine how they inform their actions over the course of the novel.

Dangerous Alliance by Jennieke Cohen is now available from Amazon, Barnes & Noble, The Book Depository, or Indiebound. Also, don’t forget to add it to your Goodreads “to read” shelf!