We use cookies to ensure that we give you the best experience on Hypable. If you continue to visit us, we will assume that you are happy with it.
10:00 am EST, January 27, 2021

When we last left Grace, she was dealing with a lot: Her boyfriend’s brother being privy to her every thought, her boyfriend’s parents out to kill her, figuring out her new gargoyle abilities… And, on top of it all, coming back to life after dying.

Needless to say, Crush ended on a pile of loose threads upon cliffhanger atop a cliffhanger. It was almost cruel the way that book ended, but only in that we had to wait another six months before we’d find out what happened next.

Sadly, that wait isn’t over yet, but we do have an exclusive excerpt to share with you to make the wait a little less painful! 👀 It may not answer any questions or give many hints about where the story is going to go, but it will definitely get you excited to read more.

Check out this exclusive excerpt from ‘Covet’ (Crave #3)!

I glance up again, but he’s looking at me strangely, so strangely that I put my pen down and hold his gaze. “Hey, what’s going on?” I ask. “You feeling okay?”

“Yeah, of course.” But he seems taken aback by the question, though I can’t figure out why.

“You sure?” I ask after he doesn’t say anything else—which is distinctly un-Hudson-like in and of itself. God knows he’s never been one who’s short of things to say. But after the day I’ve had, I’m really not in the mood to try and guess what’s wrong with him, so I just raise my brows and ask again, “What’s going on, Hudson?”

“Nothing.” There’s a bit more bite in his tone this time, and relief skitters through me. This Hudson I know what to do with. The other, softer one…I don’t have a clue. “Why?”

“Weird?” He lifts an imperious brow. “I am never weird.”

And I giggle. That’s the Hudson I know. “Never mind. Let’s get to work.”

“That is what we’re here for.” He pulls out his laptop and a notebook. “Any ideas on what question you want to discuss?”

I give him my ideas, and after a few minutes of debate, we settle on the butterfly effect—is it ethical to change something in time, for the right reasons, if you know that it will change other things later on, maybe in a not-so-okay way?

He takes Socrates, I take Aristotle, and we decide to meet in the middle with Plato.

I find an article about Aristotle’s On the Soul and start taking notes on things we might be able to use. It’s a pretty interesting article, and I get wrapped up in it, so much that I’m barely paying attention when Hudson clears his throat before saying out of the blue, “No one’s ever asked me that before.”

I’m in the middle of writing something down, so I don’t look up as I ask, “Asked you what?”

His answer doesn’t register at first, but when it does, my brain shuts down. It just flat-out stops working for one second, two.

But then I’m jerking my eyes up, and Hudson is right there—his face open, his gaze oceanic—and for a moment, I forget how to breathe. Not just because of the way he’s looking at me but because the full weight of his words finally sinks in. What they mean.

Awareness charges the air between us, has my heart beating way too fast and the hair on the back of my neck standing straight up. And still, I can’t bring myself to tear my gaze away from his. Still, I can’t do anything but lose myself in the bottomless depths of his eyes.

“No one?” I manage to force the words out of my too-tight throat.

He shakes his head, gives a little self-deprecating shrug, and just like that, he destroys me.

I’ve always known his life was awful. I’ve seen glimpses of it, figured things out by what he didn’t say, even met the horrible people who call themselves his parents. But it’s never registered before—at least not like this—that Hudson has never had anyone in his whole two-hundred-plus-year existence who cared about him. Who really, truly cared about him and not what he could do or what they could get from him.

It’s an awful realization, and a heartbreaking one.

“Don’t what?” I ask, my throat somehow even tighter than it was just a minute ago.

“Don’t feel sorry for me. That’s not why I told you.” It’s obvious he’s uncomfortable, but he doesn’t look away. Neither do I.

“This isn’t pity,” I finally whisper. “I could never pity you.”

Something moves behind his eyes, something that looks an awful lot like grief. “Because I’m a monster?”

“Because you made it.”

Excerpt from Covet © 2021 by Tracy Wolff. All rights reserved, including the right to reproduce, distribute, or transmit in any form or by any means. For information regarding subsidiary rights, please contact the Publisher. 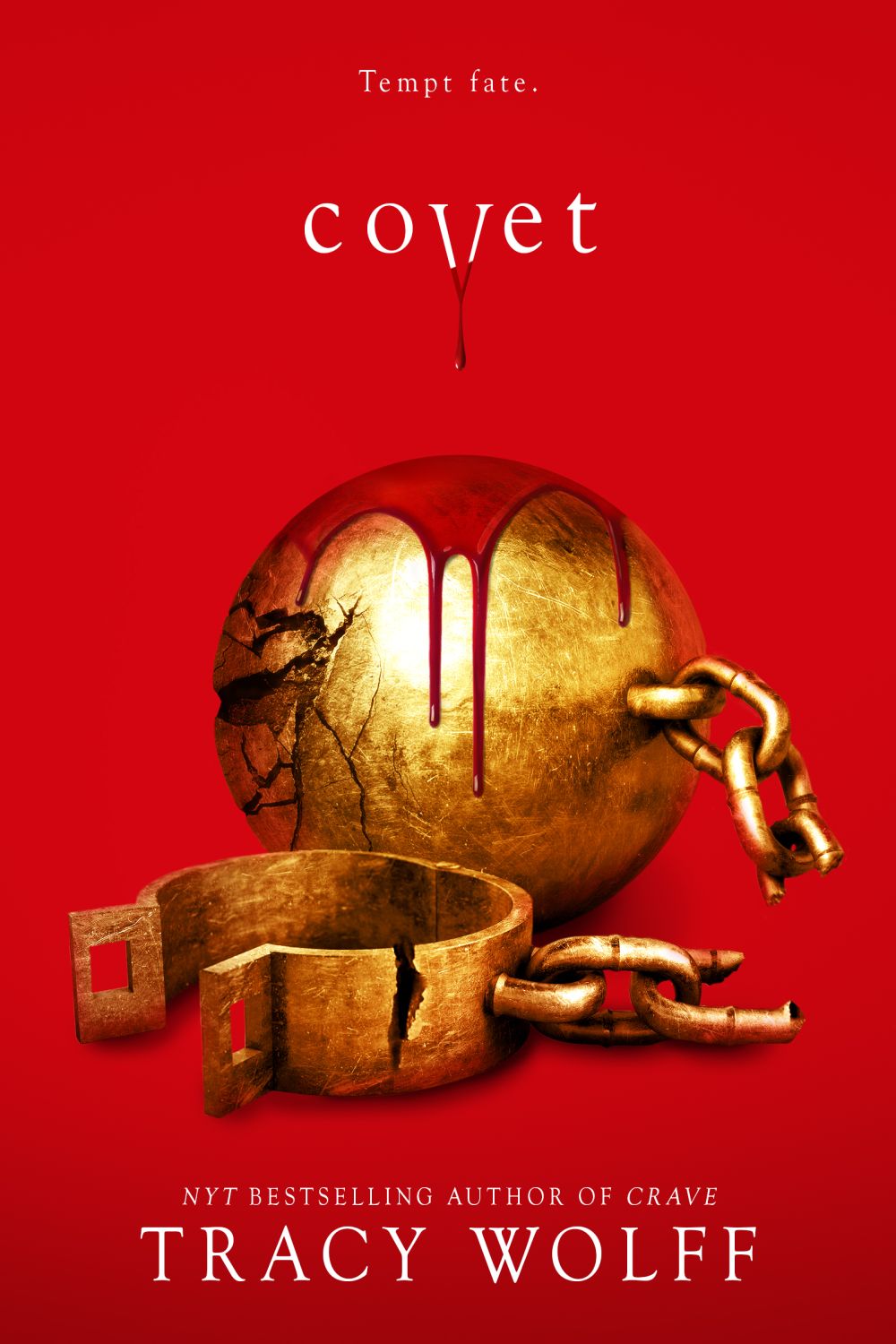 I may have reached my breaking point. As if trying to graduate from a school for supernaturals isn’t stressful enough, my relationship status has gone from complicated to a straight-up dumpster fire.

Oh, and the Bloodletter has decided to drop a bomb of epic proportions on us all…

Then again, when has anything at Katmere Academy not been intense?

And the hits just keep coming. Jaxon’s turned colder than an Alaskan winter. The Circle is splintered over my upcoming coronation. As if things couldn’t get worse, now there’s an arrest warrant for Hudson’s and my supposed crimes—which apparently means a lifetime prison sentence with a deadly unbreakable curse.

Choices will have to be made…and I fear not everyone will survive.

Covet by Tracy Wolff will be available on March 2. You can preorder really neat *exclusive* editions from Target and Books-a-Million. You can also preorder your copy now from Amazon, Barnes & Noble, The Book Depository, or Indiebound. Lastly, don’t forget to add it to your Goodreads “to read” list!