We use cookies to ensure that we give you the best experience on Hypable. If you continue to visit us, we will assume that you are happy with it.
6:00 pm EST, January 1, 2020

I watch Batman Returns every Christmas season; it is not novel to say anymore, but the point remains: Batman Returns is a Christmas movie, taking place on and around the holiday, and staging several of its iconic sequences at events related to it: a Christmas tree lighting, a masquerade ball, etc.

I watched the Tim Burton Batman films over and over as a child. Then, I rejected them for a while, as one does as they grow up. Returning to them as an adult, I found I have almost no affection for the original 1989 film while Batman Returns grows in my estimation every time I see it.

What makes Batman Returns the most enduring of the Burton-Schumacher Batman films is the fact that the true protagonist is Selina Kyle/Catwoman (Michelle Pfeiffer). It is her journey from meek office drone to confident supervillain that gives the film its structure and, surprisingly, its heart.

Selina is a woman, one that has been sidelined her entire life, one filled with anger. She works as a secretary for Max Shreck (Christopher Walken), the owner of the department store, Shreck’s. During a meeting at the beginning of the film, Selina dares to speak her mind on a business matter, and she is reminded to simply pour the coffee.

Selina berates herself and continues to do so all the way into her home after work. She enters her pink, stuffed animal-filled apartment and bemoans her lack of boyfriend as well. She has simple desires (i.e. a fulfilling career, a partner to come home to) but she cannot seem to catch a break on either front. Her anger festers.

Soon thereafter, Selina tries to prove her worth to her boss, and when she discovers his dastardly plans for a secret government takeover of Gotham City, he kills her. She is entirely disposable to him. 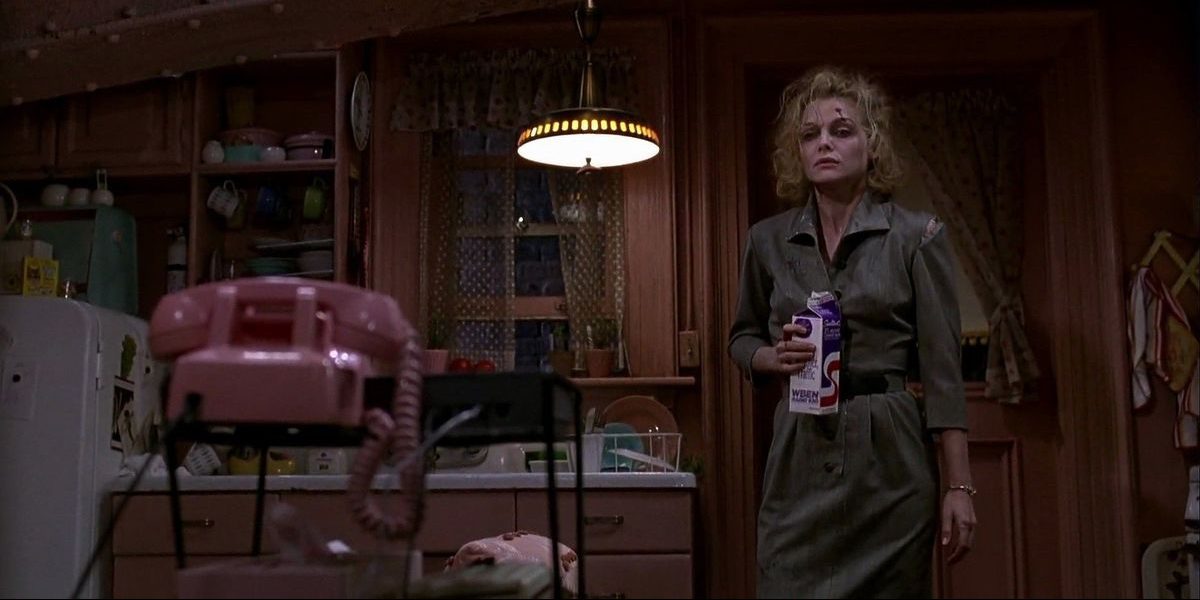 It is only in death that she becomes the person she is meant to be: Catwoman.

Upon her revival, Selina is confident, resourceful, and finally able to focus her anger productively, even if her ghostly pallor and bloodshot eyes that make her look like those photos of Prince Philip returning home from the hospital last week.

Selina finally finds purpose in life: dispatch her murderous, corrupt boss. She lets her anger guide her, finding her agency, destroying all of her stuffed animals and fashioning her now legendary, leather bodysuit.

It is also at this point that she finds love. Like the old adage says, you can’t love someone else until you love yourself first. Now that Selina is standing in her power, she is able to find her equal: Bruce Wayne (Michael Keaton). Selina and Bruce begin dating out of costume while Catwoman and Batman begin fighting in them.

When they dance at the masquerade in the middle of the film, they are the only two people not wearing masks. Their natural faces are masking the other from their true identity. The tension in the moment is palpable, and leads to them realizing who the other is. Masks off.

When she realizes Bruce is Batman, she asks him, “does this mean we have to start fighting?” in a despondent whisper, because she already knows she will have to choose her identity over her love — she has come too far to give Catwoman up now.

Selina had finally built her true identity, which she could only do after killing the identity that she thought was expected of her (well, having it killed for her). From that point on, she knows who she is and what she wants, and nothing is going to stand in her way. 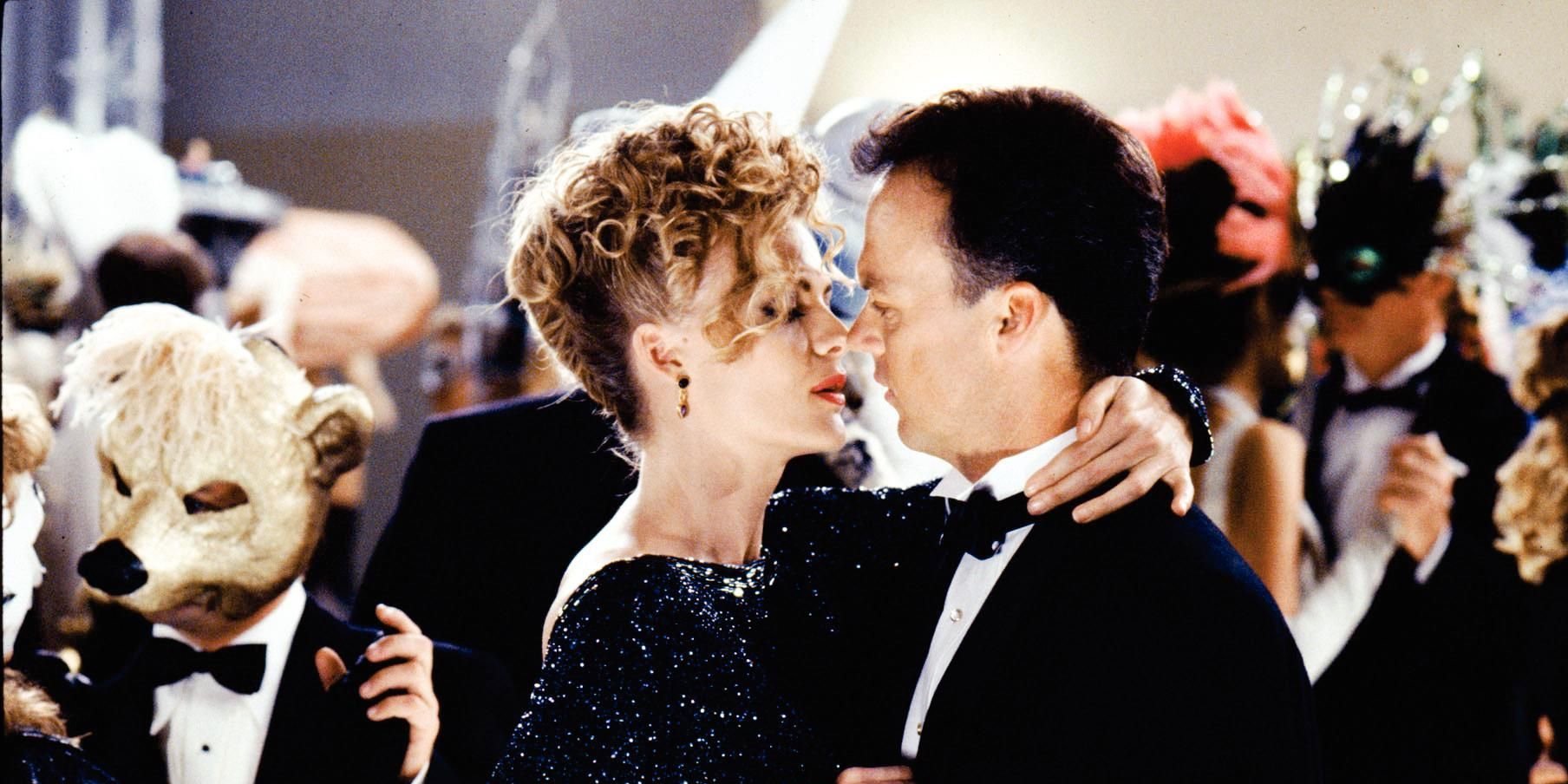 Michelle Pfeiffer gives arguably her career-best performance as Selina Kyle. She is cringingly pathetic in the first act of the film, but also sympathetically sad.

When Selina returns home after her death and begins her transformation into Catwoman, an electrifying energy takes over her entire body. Her motions become calm, her voice deepens, her eyes begin to pierce whatever she looks at.

Pfeiffer starts Batman Returns as a shadow and transforms into the one of the most iconic characters in cinema of the past generation. And very few people have mastered the art of looking at someone or something you love but cannot have the way Pfeiffer has, as she does when she gazes longingly at Bruce.

By becoming Catwoman, Selina embraces the weirdness in her soul. Catwoman was always inside of her waiting to be unleashed, but she had to literally die in order to find her. All of Tim Burton’s films are about someone who feels “other” and their struggle against society. Catwoman embodies that theme better than any other of his protagonists.

It’s no wonder that in the form of Catwoman, the theme of embracing your otherness has become a beacon for queer men and women around the world — for anyone who seems other. Selina had tried for her entire life to live the way she thought society expected her to, but it is only when she comes out of the closet, so to speak, that she finds happiness.

It is an important message for the holiday season: be yourself and follow your purpose. Let yourself be reborn as the person you are meant to be.

The holidays can be a lonely time for anyone, especially people who do not conform to society’s expectations. And Batman Returns shows a powerful way for those people to embrace and love themselves. So this New Year’s, take a moment to reflect on who you are supposed to be, and become her.