We use cookies to ensure that we give you the best experience on Hypable. If you continue to visit us, we will assume that you are happy with it.
12:15 pm EDT, October 24, 2019

An ode to C-3PO, hero of ‘Star Wars: The Rise of Skywalker’

The final trailer for Star Wars: The Rise of Skywalker is giving me all the C-3PO feels.

The new trailer for Star Wars: The Rise of Skywalker is designed to yank at your heartstrings harder than Luke Skywalker pulls back the thruster on his X-Wing.

Familiar faces return, appropriately accompanied by on-screen tears. The score soars, trumpeting the classic main theme that swells in time with our nostalgia. Throughout the ruthlessly emotional Rise of Skywalker trailer, titles remind us that This Is It, Guys. This Is Really The End. The Saga Is Totes Over. Bring Tissues.

It’s all a swirl of miasmic feeling and bright colors, as thoroughly effecting for your average Star Wars fan as it is agonizingly unspecific. The Rise of Skywalker trailer offers virtually nothing by way of story, does not update the stakes of the conflict, and assures us of very little beyond, “Yep, this is definitely Star Wars!”

But there is one moment that stands as an exception to all the feels and vaguery. At the trailer’s midpoint, the emotive voice-overs, dazzling explosions, and ominous looks pause for a moment of actual interpersonal exchange.

In one of the galaxy far, far away’s many rooms filled with mechanical junk, a small creature prepares to alter something within C-3PO’s circuitry. The golden droid swivels his head from side to side.

“What are you doing there, Threepio?” asks Poe Dameron.

“Taking one last look, sir,” Threepio says. “At my friends.”

Here’s the thing. Since time immemorial (or, I guess, like, 1977) C-3PO’s position in Star Wars has usually been as the butt of the joke. And that’s fair. It’s funny to watch such a fussy, detail-obsessed character fail so thoroughly at rolling with the many dangerous indignities required of a Skywalker companion. Actor Anthony Daniels’ comic timing is always a delight, and Threepio is all you could ask for from a stick-in-the-Dagobah-mud sidekick.

Whether Threepio is being ejected from the Tantive IV, cartoonishly dismembered in a bug factory on Geonosis, or reminding our heroes (yet again) of their deliriously bad odds in the coming fight, his anxiety-ridden state of being remains maddeningly consistent: He’s afraid. He’s annoyed. And he’s going to make sure we all know about it. 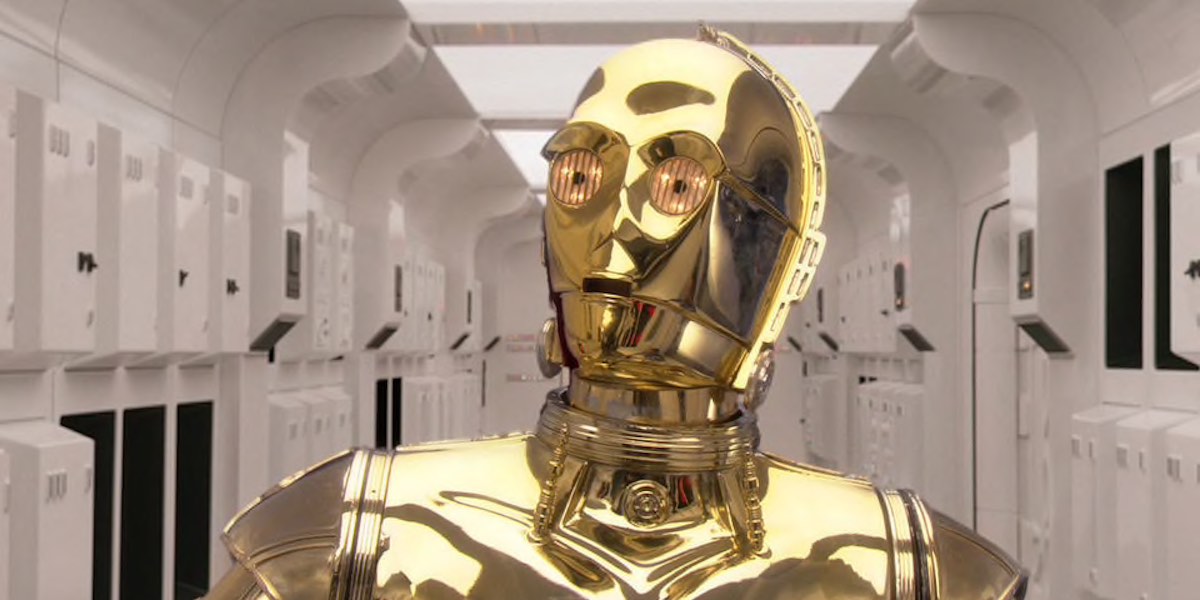 C-3PO’s cowardice is a reliable point of humor in the Star Wars films, and usually in the many other Star Wars media in which he appears. (Another tip of the hat to the tirelessly prolific Daniels is appropriate here — Threeps, as I call him, is everywhere.) From a certain angle, the golden droid largely exists as a foil to the brave and indomitable R2-D2, who may not speak Basic but is arguably more eloquent than the the wordy Threepio.

If R2-D2 is motivated by loyalty and a sense of what is right, C-3PO is guided by a sense of “What is least likely to kill me?” R2-D2 dives fearlessly into the perilous unknown, and Threepio follows — but only because he is dragged there, most likely while screaming.

Of course, C-3PO has his moments of glory. His deification by the Ewoks of Endor might be one of the funniest scenes in Star Wars, not least because of Luke and Han’s utter bafflement that their irritating companion is now their only way out of death by teddy bear.

And while C-3PO and R2-D2’s relationship is often played for humor, there’s no question that the two droids also share a real emotional bond. These two long-time travelers might just have shared more drama and close calls between them than any other pair in the galaxy, and there’s no question that the saga honors the duo far beyond their parts of circuits and chrome. 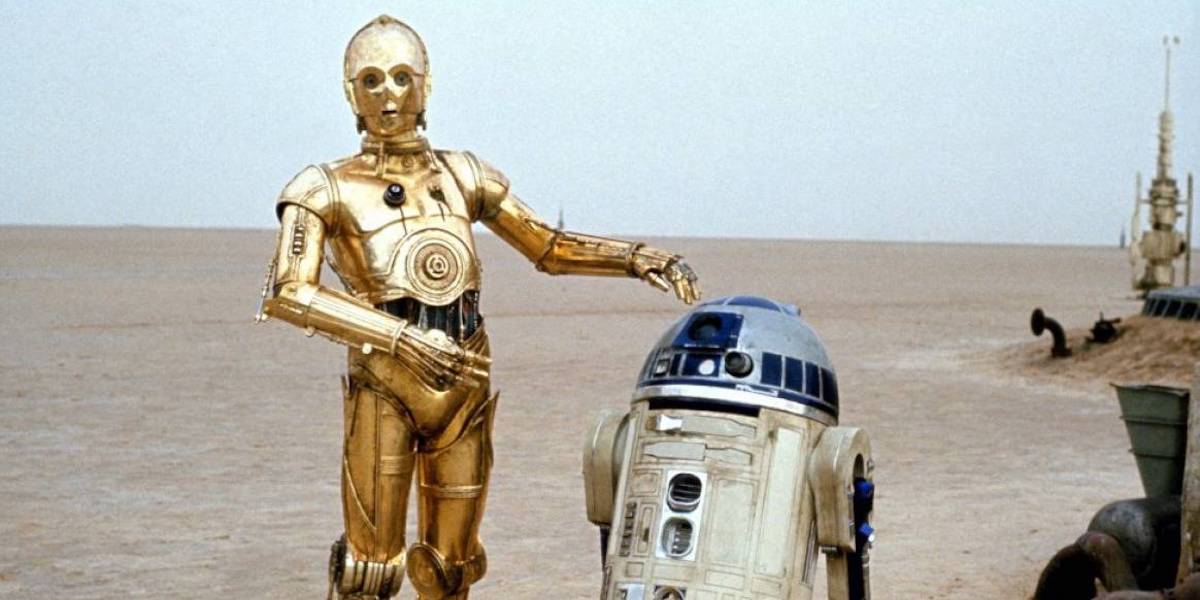 Still, this startlingly specific moment in The Rise of Skywalker trailer, in which C-3PO seems to offer a very final farewell to his companions, throws the totality of the golden droid’s characterization into stark relief. Like all good concluding arcs, it’s made me reflect on C-3PO, the galaxy’s perpetually perturbed, borderline bitchy, but essentially beloved butler-robot, and what he has contributed to the multigenerational saga of Star Wars.

And that is a dose of well-defined, thoroughly earned, and deeply relatable neuroses.

I’ve always felt a weird, and perhaps unflattering kinship with C-3PO. Despite the jokes at his expense, I found in the golden guy a reflection of my own anxieties. The tiny agonies of every day, he expressed; the boundless terror of the unknown, he acknowledged. Just because you’re on an alien planet doesn’t mean you like getting dirty, right?

Threepio is, for me, a grounded being in a story full of wildly elastic heroes. I might dream of emulating Leia’s iron resolve, Luke’s bright bravery, or Han’s wily wisdom — but I could not and cannot really relate.

Well, I am also afraid of scary things. I also want to follow protocol. I also want to hide and be kept safe, to avoid pain, to live in an ordered and predictable galaxy. I have never wanted to be flung through the stars, forced to contemplate my own infinite smallness; rather than shout into the void, I would happily whisper into a small, cozy room.

Related: 3 The Rise of Skywalker theories about Dark Rey

Yes, if I were ejected from a spaceship and forced to march miles across a desert, I too would happily sell myself for a bath and a place to sit down. I can’t take the heat, and I make no apologies.

But C-3PO’s significance is greater than his patented brand of foppish terror, and even the fact that I can recognize his refusal of the call as my own. His true importance lies in the fact that his small hopes and overactive sense of self-preservation exist in tandem with his continued importance to the grand sweep of Star Wars.

He may whine. He may holler doom at every turn. But Threepio is brought (or dragged) along on the magic carpet ride all the same. No matter his attitude, our heroes are better off with him than without him. 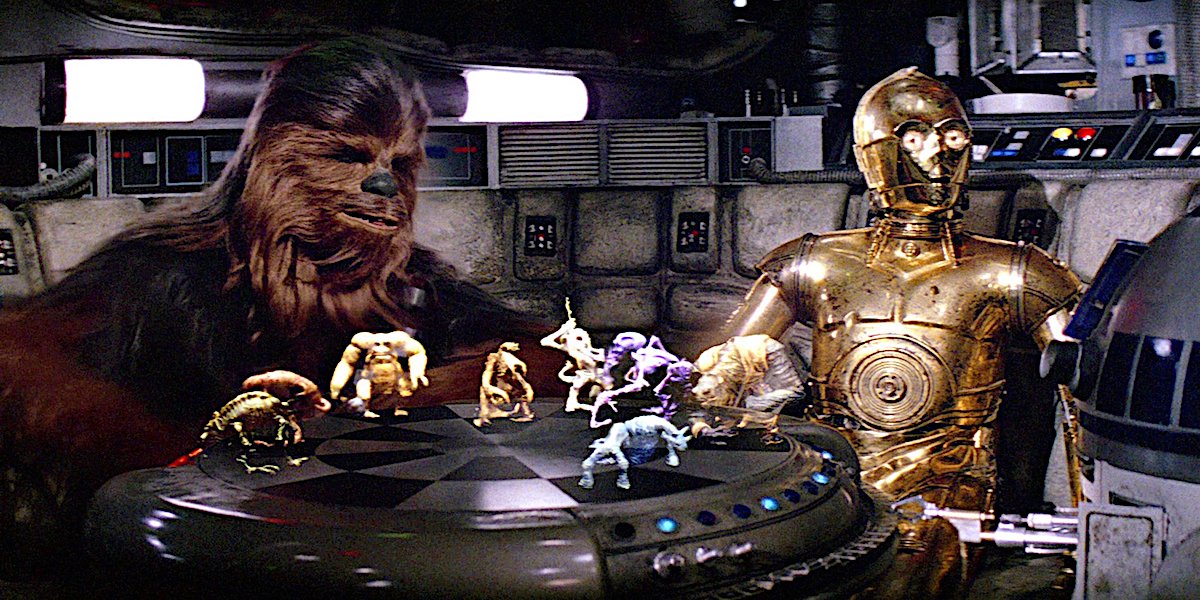 R2-D2 may get more of the affectionate looks, be represented in more stuffed toys, may be a higher-tier Legendary Droid. But Threepio is just as indelibly part of the patchwork of rebellion fans have followed for so long.

C-3PO never signed up for this ride, and he isn’t particularly happy to be here. It doesn’t matter; he contributes anyway, to both the story and the marvelous metafiction of the GFFA. Star Wars simply would not be Star Wars without C-3PO.

That, I think, is why the brief exchange in The Rise of Skywalker trailer strikes such a resonant chord. As fans, we don’t know if this is truly the end of Threepio (though his mysterious red-eyed doppelgänger seen in earlier trailers suggests that some change is in store). But it certainly seems that C-3PO thinks he is about to meet his maker. And instead of the characteristic hue and cry, Threepio takes a moment to identify what he really values.

This time, it is not survival. It is, as he says, his friends.

(Dear Lucas, it suddenly got dusty in here.)

Isn’t that, in the end, the point of a character like C-3PO? Yes, he’s here to make us laugh. Yes, he’s here to be a kindred spirit for all of us anxious non-heroes out there. But he’s also here to show that our ultimate value is not in bravery, or resilience, or being one of like four million “best pilots in the galaxy.”

We are important in our showing up. Our sticking around. Our bonds that we build and preserve through sheerly, stubbornly being — and therefore becoming more than the sum of our parts. Just like C-3PO is, no matter what his eventual end.

This brief scene in The Rise of Skywalker trailer follows a particularly ominous voiceover from the Emperor, who croaks that “Your coming together is your undoing.” It doesn’t take a deep dive to recognize that this thesis will probably not be borne out by the film. Still, it’s worth noting how deliberately the Threepio scene already debunks this.

Brief as it is, that exchange — like Star Wars — is ultimately all about connection. And though that has been a fallible theme for Threepio through his saga-length journey, here in this final chapter, there is no longer a shred of doubt.

C-3PO is a grounded being in an atmosphere of heroes. And now, at long last, he owns his own irresistible gravity.

Star Wars: The Rise of Skywalker lands in theaters on Dec. 16.