We use cookies to ensure that we give you the best experience on Hypable. If you continue to visit us, we will assume that you are happy with it.
1:00 pm EST, December 18, 2019

BTS Bon Voyage season 4, episode 5, “Let’s jump!” brought on the member’s first-night camping in New Zealand and a wild outdoor activity that tested their fears! Here’s all the can’t miss moments from the episode!

If you haven’t already watched and purchased the season, you can find it on Weverse!

Related: BTS Bon Voyage season 4: Release date, episodes, and everything else we know

As the others were busy getting the camp gear all set up, Yoongi and Jin focused on making sure the fire was ready to cook with. Jin was confused as to why the olive oil he used wasn’t working and asked Yoongi if it was supposed to burn.

To which Yoongi replied, of course not. Cue to Jin trying to hide the olive oil away. He was not successful.

Let’s not forget that Yoongi jokingly told Jin and the others that they could use the olive oil for the fire because he wanted to buy the big bottle of it for cooking. 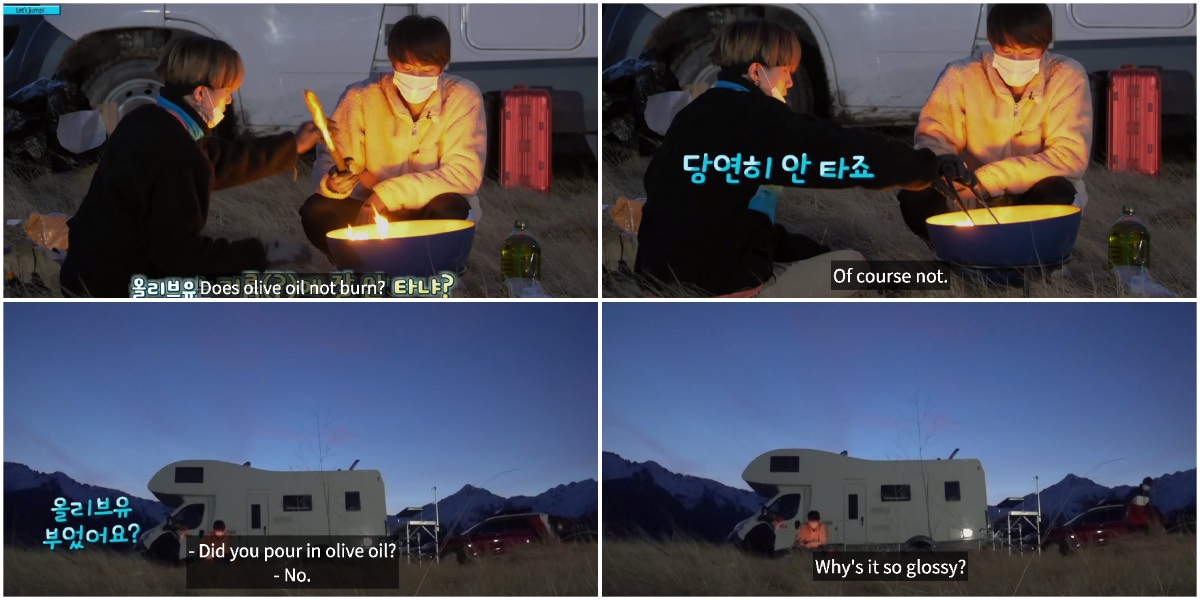 Jungkook, Jimin, and Hoseok were all building cots together for the tent. Naturally, they wanted to test the durability of the cot so Jungkook jumped onto one. Which then led the other members to pile on top of their maknae.

The result is their infectious laughter at Jungkook getting smooshed into the cot, which held all that weight! After enjoying their dinner and sitting around the fire to chat about their trip so far, the members decided it would be a good time to make some coffee. However, they had to reuse some of the same cooking gear that Yoongi had used for dinner.

Namjoon volunteered to wash the ladle for Yoongi while he made the coffee, which might not have been the best idea. Yoongi used the ladle to scoop up the coffee when it was done, only to discover that it made the coffee taste spicy! After questioning Namjoon about it, they found out that he’d only actually rinsed it off without any soap. 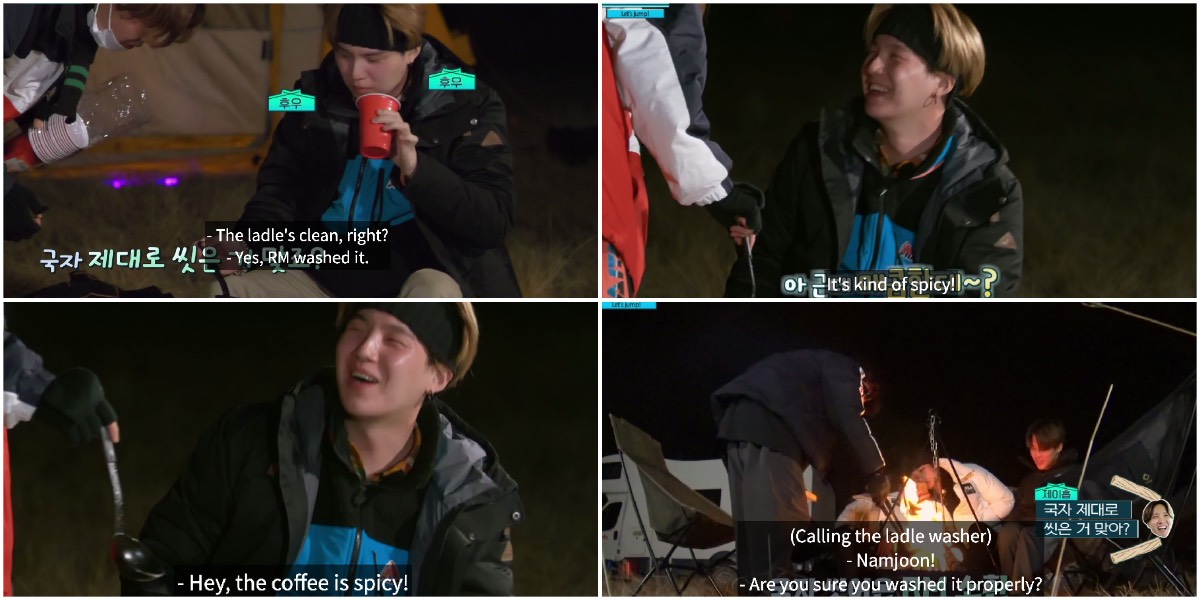 As the members got ready for bed, they realized that Taehyung was missing. At first, they thought that he might have wandered off to go look at the stars. But once they got inside the camper they discovered that he’d laid down in the bed and dozed off, in his winter jacket and everything. 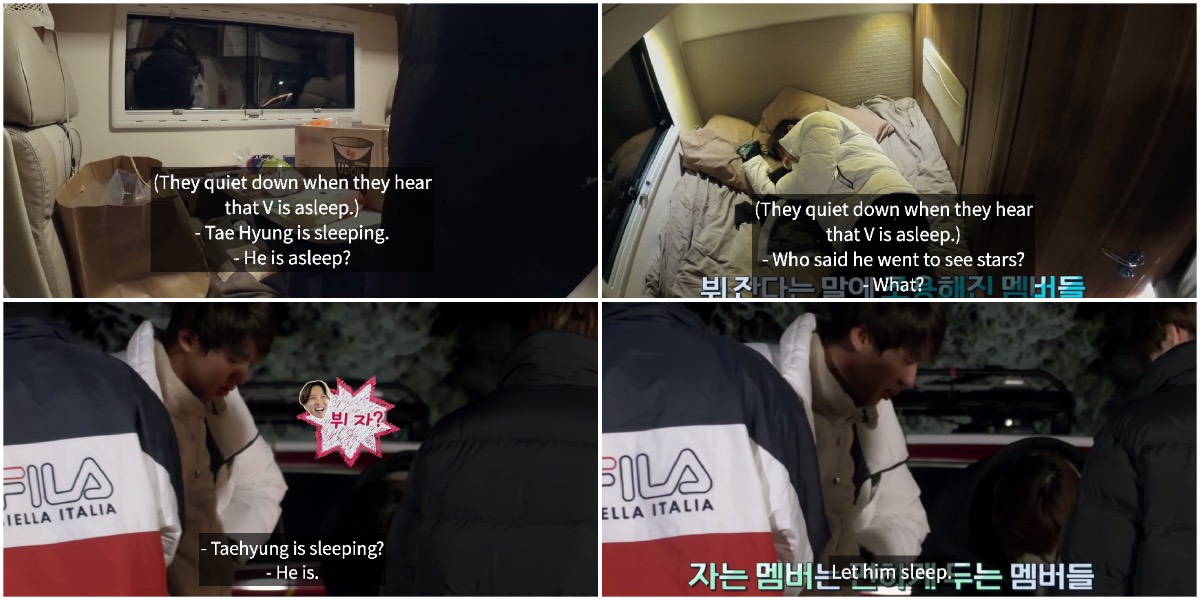 In the morning, the members are all extra sleepy! Probably because they had so much to do the night before with camping as well as sleeping in different environments than they’re used to.

The camper crew complained that it got too warm in there, while the tent crew had their heat turned off in the middle of the night. And apparently, Jin slept in the SUV? 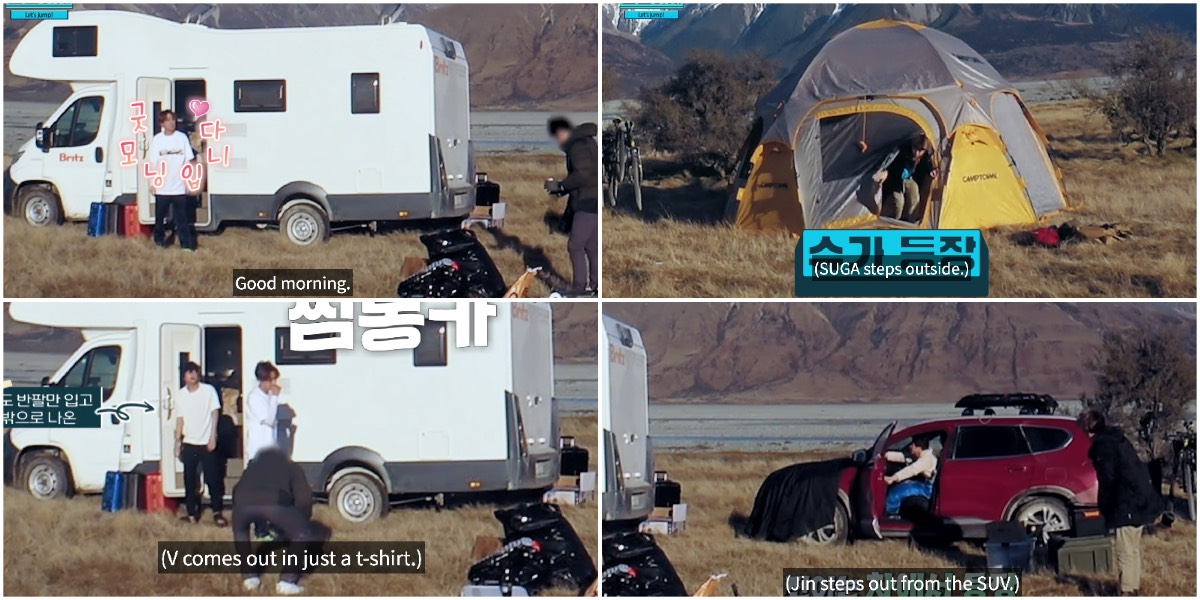 Once they’re all packed up and ready to head off to the spa, the members divide up into different vehicles. Jin drove the SUV along with Yoongi, Namjoon, and Taehyung as his passengers. They chat about their night as they drive along the bumpy road. They hit a particularly big bump and somehow they don’t notice when the entire rack of bicycles falls off the SUV!

Luckily, the Bon Voyage film crew driving behind them spotted the bikes and saved the day. 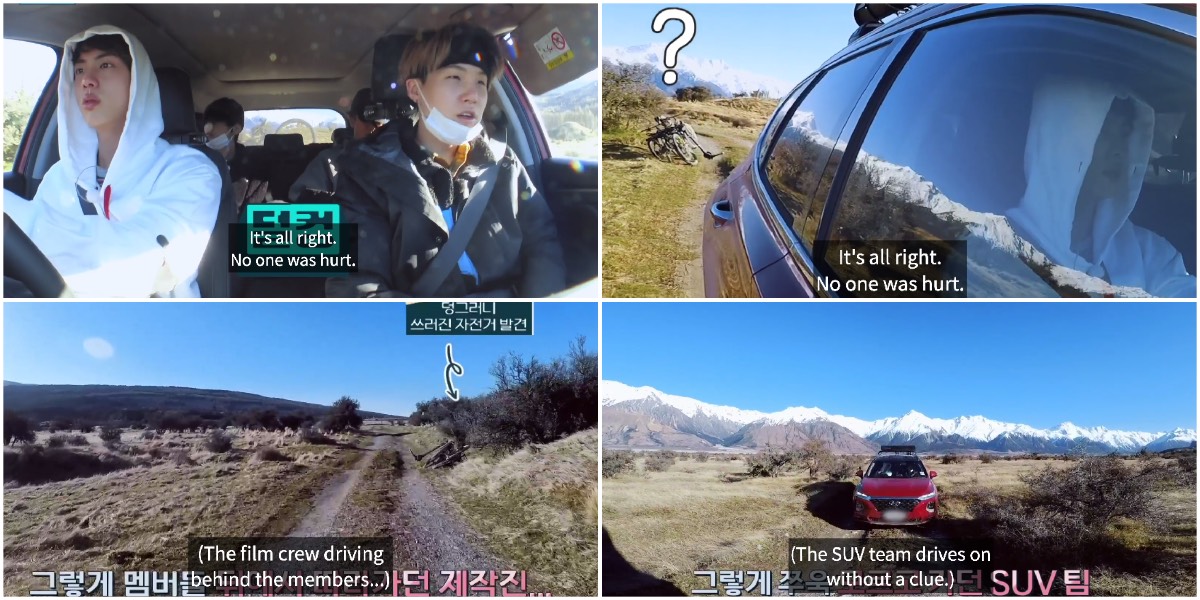 The members got to enjoy a nice soak in the hot tub together after their first-night camping, along with some snacks to keep them full and happy. It’s mostly a relaxing activity until they get silly and start to have a water fight.

They all create chaos with all the water they splash around. Minus Yoongi, who just sits there until they’re done and complains he was an innocent victim. 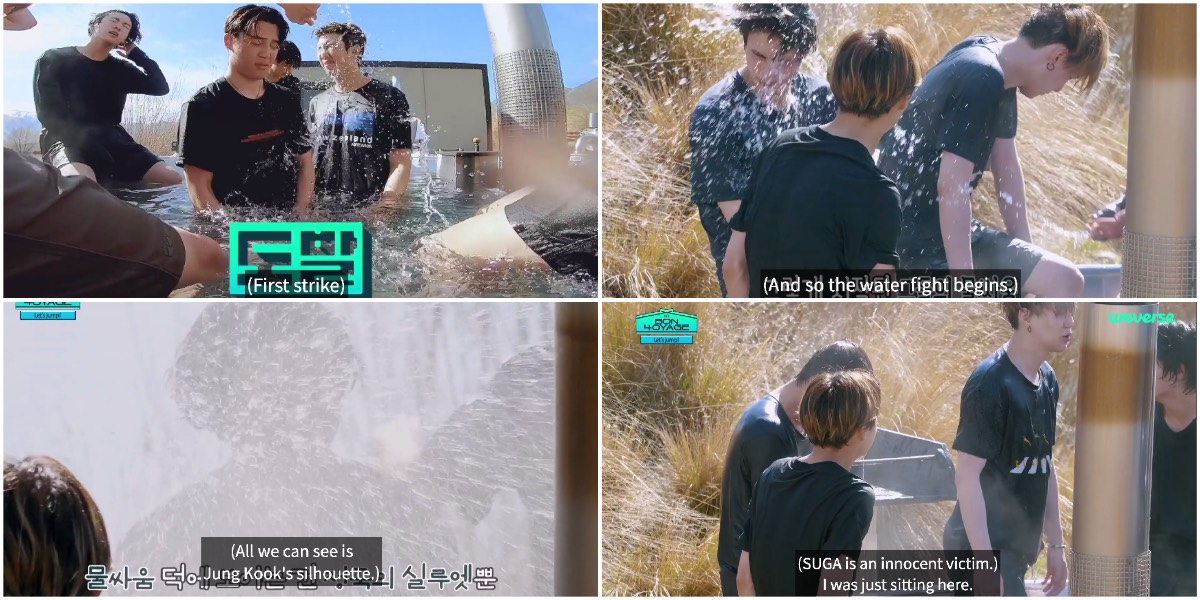 After enjoying the hot tub and taking some showers to refresh, the members headed off to their afternoon outdoor activity for Bon Voyage. Which was a giant swing and catapult over the mountains of New Zealand! Understandably, not all of the members wanted to take the scary leap a hundred feet in the air. Surprisingly, Jin and Hoseok volunteered to go on and they went first!

They were very proud of themselves for taking on the scary ride as they’re usually known as the members who scare the easiest!

Taehyung and Namjoon also went on the giant swing, while Jungkook went on by himself and did it upside down! Taehyung and Jungkook were the only ones that tried out the catapult that shot them into the air over the landscape. 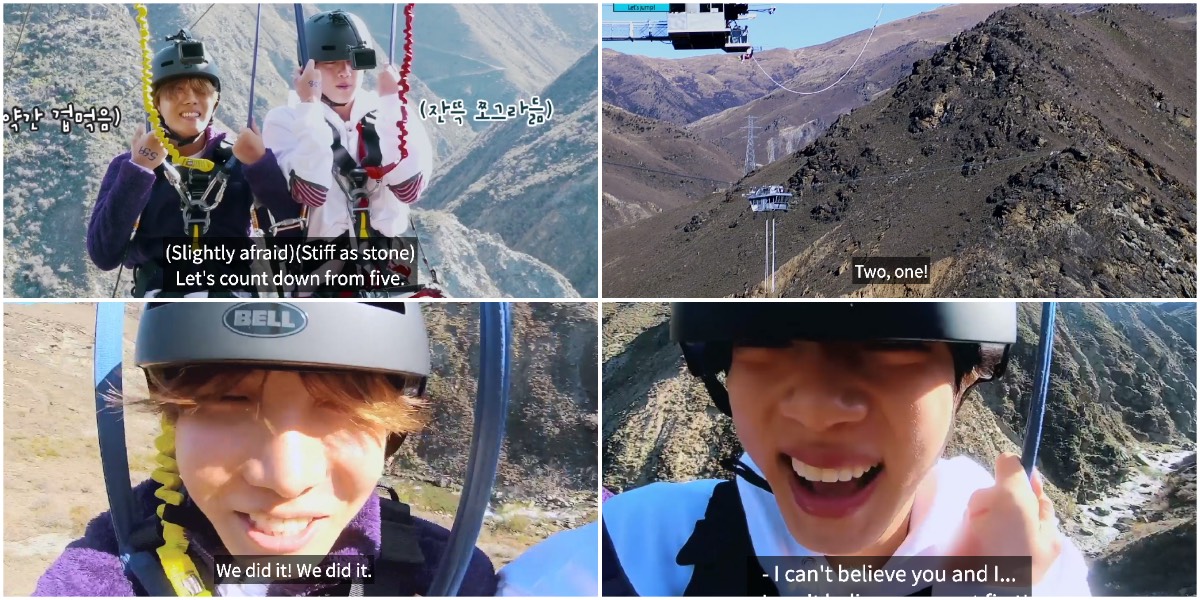 While half of the group is grocery shopping for more supplies, the others take the camper van to get it ready for their second night camping out. They have to fill it up with water before they can get started, and Jimin gets excited thinking it would be nice to surprise the others.

He wants to try and get the tent and fire all set by the time the grocery team gets back. Hoseok and Jin aren’t as convinced as Jimin that they would receive an enthusiastic response from the others. 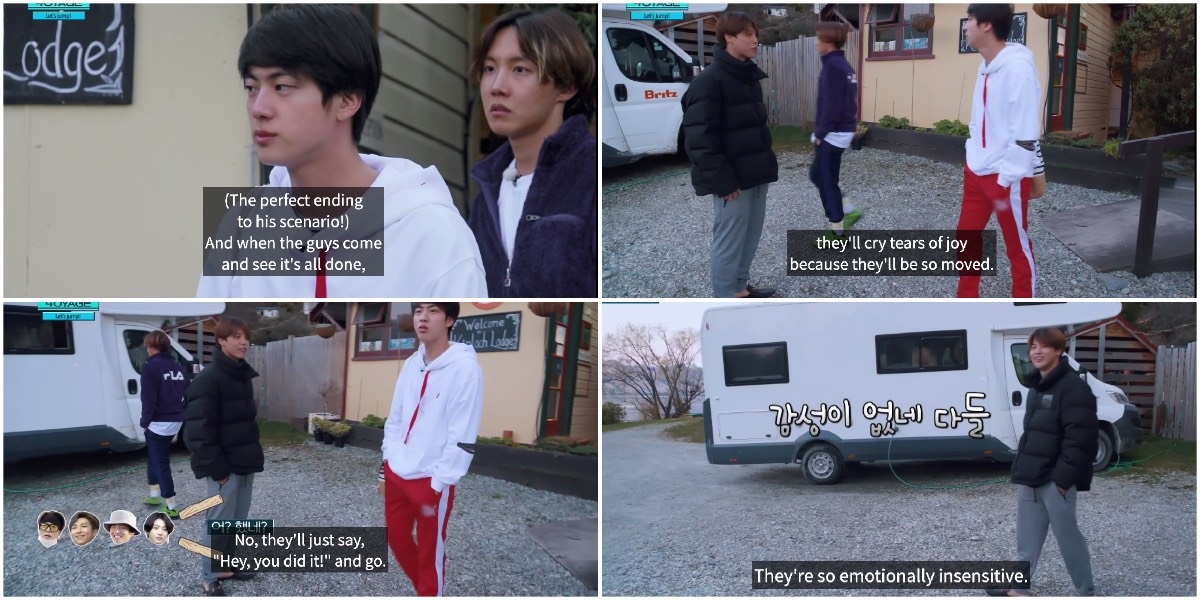 On the next episode of Bon Voyage, we’ll get to see BTS’ second night of camping out in New Zealand!

What was your favorite moment from Bon Voyage season 4, episode 5, “Let’s jump!”?

by Sonya Field
by Jay Snow