We use cookies to ensure that we give you the best experience on Hypable. If you continue to visit us, we will assume that you are happy with it.
7:00 pm EDT, March 18, 2019

Be More Chill has actually arrived on Broadway, a testament to the power of fandom… so we went to see what all the fuss was about.

For those unfamiliar with the background, Be More Chill is based on a young adult novel by Ned Vizzini, about a teenage boy who ingests a supercomputer in a pill to make himself popular. (Shocker of shocks, it doesn’t go well!) The book was adapted into a musical by Joe Iconis (Smash) and Joe Tracz (The Lightning Thief Musical, A Series of Unfortunate Events on Netflix), with direction by Stephen Brackett (The Lightning Thief Musical).

The show had a very brief run in New Jersey in 2015, but the cast album was rediscovered two years later and went viral, attracting a large and vocal fandom. Finally, theater producers decided to mount a production of it Off-Broadway last summer. That production sold out pretty much before it even opened, so Be More Chill transferred to Broadway, where it’s packing the Lyceum Theatre full of excited teenagers eight times a week.

If you’re already turned off by “ew, teenagers!” — as most reviewers over 30 seem to have been — then leave well enough alone. Lobbing vitriol at Be More Chill has become something of a cottage industry among the very people who lament that young people don’t see theater enough. 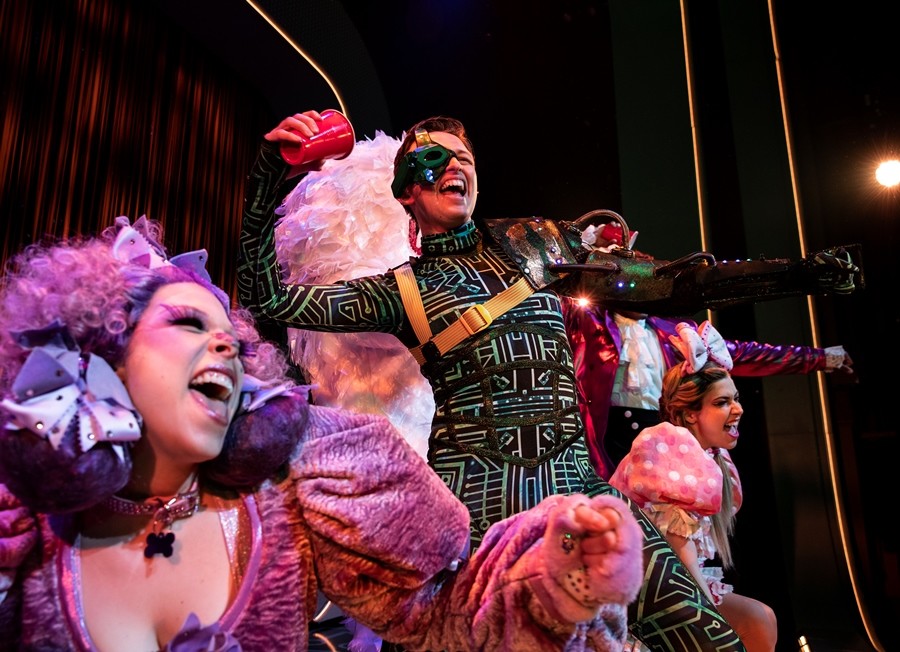 One thing I appreciated is that the two leads — Jeremy (Will Roland) and Christine (Stephanie Hsu) — genuinely look and act like high schoolers who wouldn’t be top of the food chain. They feel like people you knew in high school, or perhaps you were them in high school, rather than someone you’d stumble into on a CW show. They’re the leads, but they’re allowed to be kooky and a little out there, rather than being the straight man while the supporting cast shines.

Much of the first act is given over to setting up the story, but it moves briskly along. The proceedings get a jolt of life when George Salazar (The Lightning Thief Musical) shows up as Michael. There’s good reason why Salazar has been the breakout star of Be More Chill — he infuses every scene with a giddy geekiness that can’t help bringing a smile to your face. Think of him as this show’s Luna Lovegood — an out-there character completely comfortable with who he is. You either want to be like Michael, or want a friend like Michael. Salazar and Roland have an easy camaraderie as Jeremy and Michael, where they are totally convincing as long-time best friends.

There isn’t a single weak link in the cast, but the other standout is Jason Tam (If/Then) as the SQUIP (the supercomputer making Jeremy cool). Jeremy’s SQUIP appears as Keanu Reeves, and Tam oozes charisma, swaggering around the stage as a wholly believable personification of coolness. The SQUIP enters Jeremy’s mind and instructs him how to be cool. The scenes are heightened for effect, but never quite veer into caricature — this musical in sincere in its regard for teenagers’ plights, which is why it’s resonated so well. 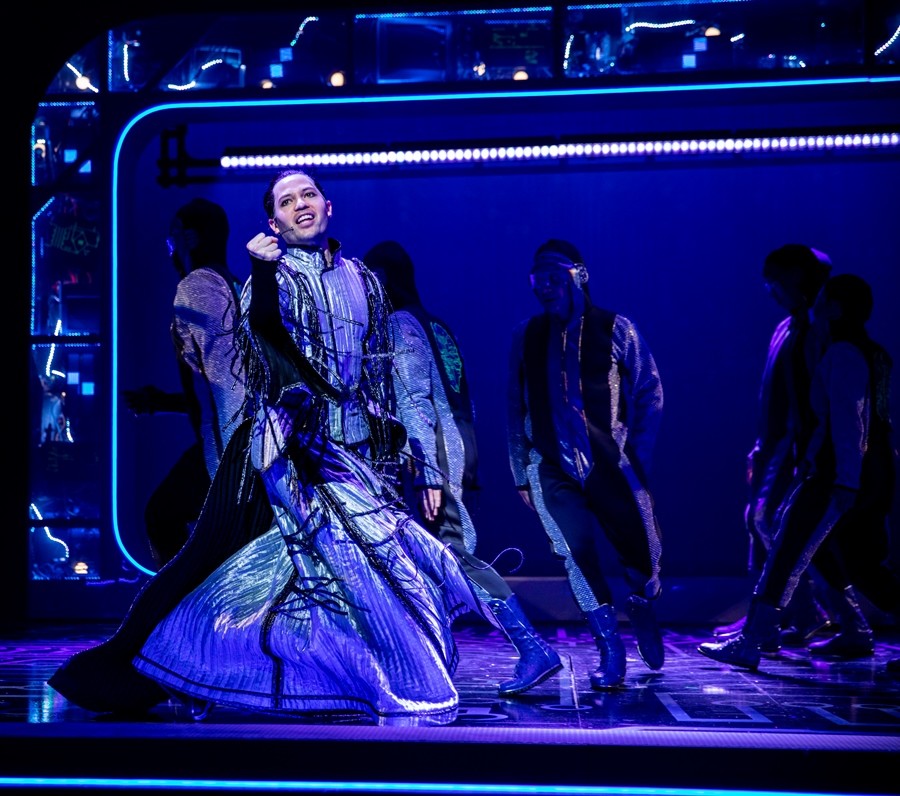 Unfortunately, the conclusion of Act 1 marks the weak point in the show. Joe Iconis wrote a new song for the Off-Broadway production’s Act 1 finale, a big solo for Jeremy right after he decides to ignore Michael in favor of popularity. It’s called “Loser Geek Whatever,” and was released as a single a few months ago. In this writer’s opinion, the song was by far the weakest in the entire score. Musically, it just wasn’t very interesting. Storywise, it didn’t work at all.

We’d just watched Jeremy cut Michael out of his life in favor of popularity — and while we can’t speak for all audiences, this writer empathized much more with Michael than with Jeremy in the situation. So just as we’re seething at Jeremy, he gets a very long solo whining about how he doesn’t want to be a loser. It’s very difficult to sympathize with his plight after the awful treatment of his best friend. So the new song’s a dud, but the rest of Act 1 is certainly enough to hook audiences.

In fairness, my +1 at the show considered “Loser Geek Whatever” to be one of the best songs, so your mileage may vary. And if you fall into the latter camp, good news: there will be a (just announced) Broadway cast album preserving the Broadway production.

But from worst to best: the top of Act 2 is by far the best chunk of the entire show. It opens with a rousing party song, “Halloween,” which was my favorite song of the whole show (and my ringtone for all of October). Not since the Mean Girls movie has there been such a biting look at teenagers celebrating Halloween! Major props to the costume designer (Bobby Frederick Tilly) for all the characters’ Halloween costumes — we won’t spoil the punchlines, but they’re fantastic! 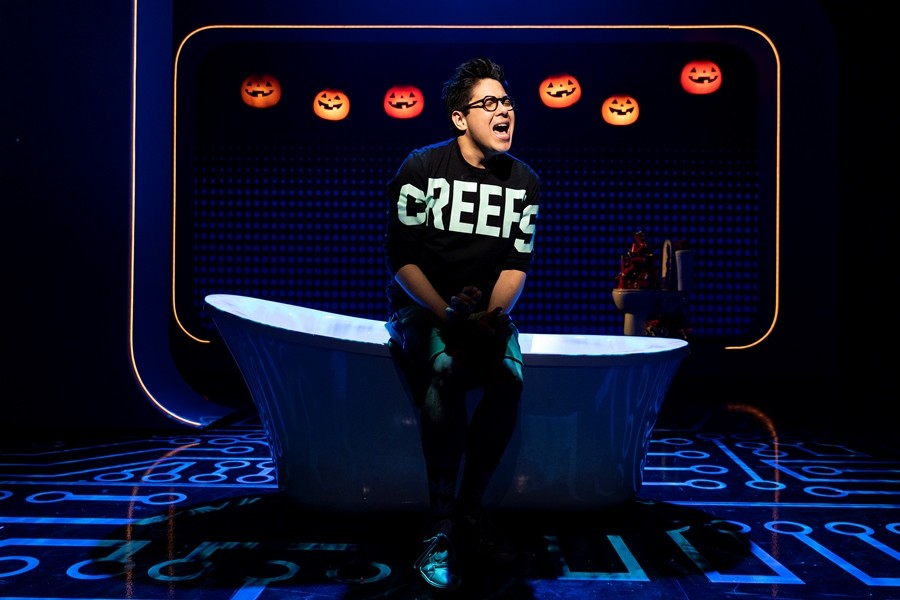 The party segues into perhaps the most hilariously uncomfortable scene, as Jeremy is seduced by a popular girl dressed as a baby. But while that’s played for laughs, those are quickly replaced by sobs for the show’s flagship number: “Michael in the Bathroom.” George Salazar’s big solo was what catapulted Be More Chill to cult classic, and by the end of it, there wasn’t a dry eye in the Lyceum. The big solo is a musical rendition of a slowly building anxiety attack, and the only thing harder than watching it is looking away. If there’s any justice in the world (there probably isn’t), Salazar will win a Tony Award and every other theatrical accolade for his performance here.

The show hurtles toward its predictable yet satisfying conclusion and ends up feeling much shorter than it actually is. It’ll leave you feeling good and humming the songs for the next few days. It’s also a breath of fresh air for Broadway — a scrappy little musical that parlayed actual audience response into success, instead of brand names or musicians’ catalogues. We highly recommend you see this musical on Broadway, and make sure this production does more than survive!

For tickets and further information, visit the show’s official website.