We use cookies to ensure that we give you the best experience on Hypable. If you continue to visit us, we will assume that you are happy with it.
1:00 pm EDT, April 7, 2020

‘Aru Shah and the Tree of Wishes’ book review: Every wish has a price

Aru Shah and the Tree of Wishes is the third installment in Roshani Chokshi’s Pandava series. Read our review to find out how it fares!

The Pandava Quintet was a brilliant series to launch the Rick Riordan Presents imprint. It started with The End of Time, which led us to The Song of Death.

Now, we sit beneath The Tree of Wishes along side Aru and her friends, looking up into its bountiful branches for answers to questions we’re afraid to ask.

Aru has and always will be a complex character. She’s not difficult to love by any stretch of the imagination, but she does come with her fair share of faults. She’s prone to lying, quick to anger, and full of terrible jokes.

And yet there’s so much potential in her. Aru Shah and the Tree of Wishes explores many themes, but the one that stuck out the most was Aru’s struggles with becoming a leader.

Her sisters look to her for guidance, and even though she doesn’t think she’s ready for that kind of responsibility, she does her best to protect those she loves.

And, you know what? She’s pretty good at it.

Those faults that Aru struggles with are the same qualities that make her a fantastic leader. She’s quick on her feet, deeply loyal, and a true light in the darkness. Just because leadership does not come easy doesn’t mean she isn’t destined for greatness.

But our protagonist isn’t the only one who gets to shine. This Aru Shah and the Tree of Wishes book review would be remiss to ignore Mini, Brynne, the twins, and even Aiden and Rudy.

Mini, who often struggles with her confidence despite her brilliance, doesn’t miss an opportunity to save the day, even if she doesn’t get the credit. We see more of Brynne’s strength, as well as her vulnerability. She cares deeply for the people she lets into her inner circle, and all of us would be better if we had a friend like her. 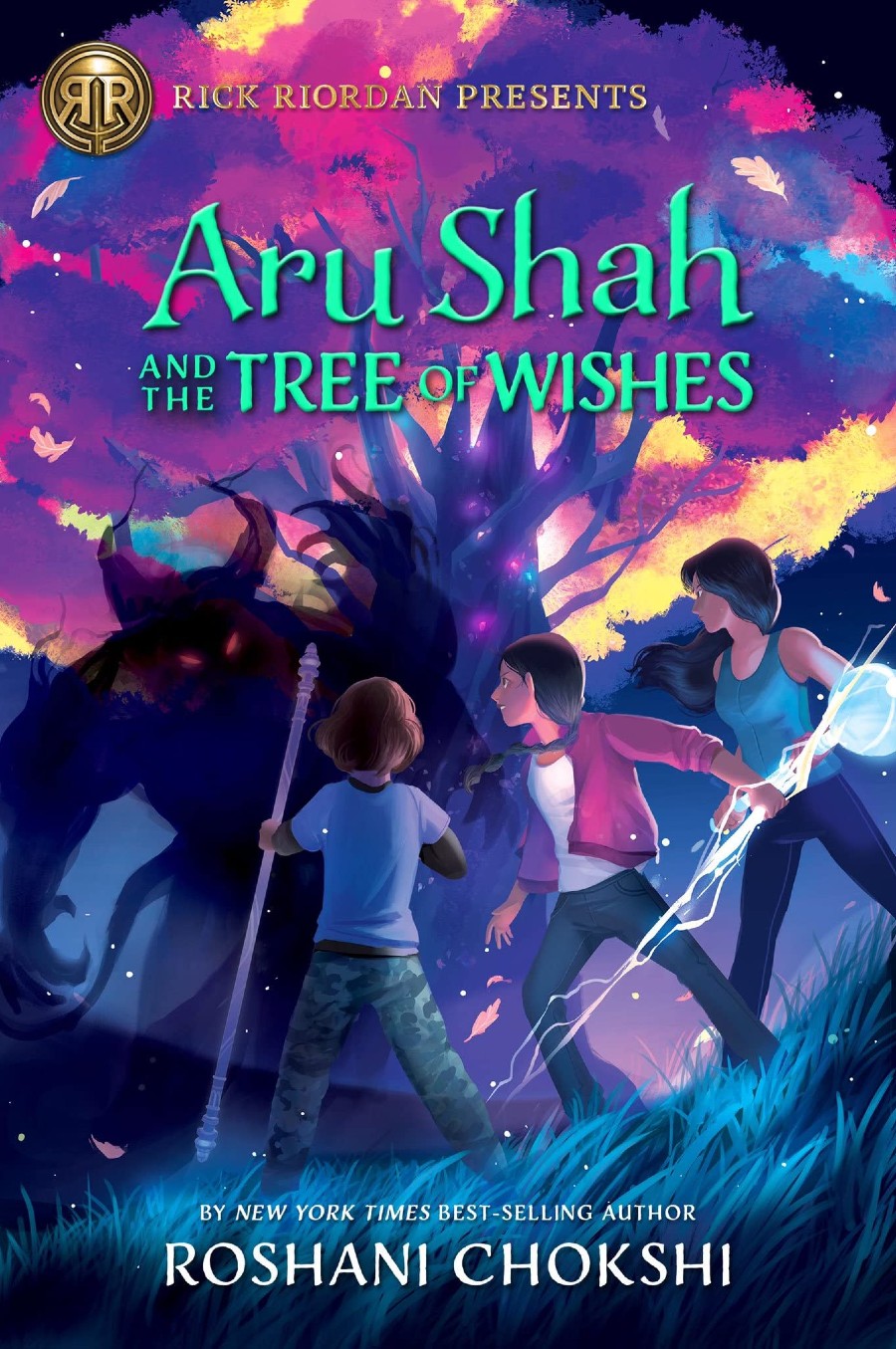 Nikita and Sheela also take the spotlight in this book. We learn more about what their nightmares are made of (literally), and find out that Nikita’s thorns are more bark than bite. These two are so interesting to me because they hold the keys to saving the entire universe—at only ten years old.

What a burden it must be to bear that kind of power alone.

But they’re no longer by themselves, and throughout Chokshi’s third novel in this series, the twins come to learn this lesson as deeply as Aru, who still struggles with her own fears despite having learned that she can rely on her sisters in a pinch.

And then there’s Aiden and Rudy. The former is a constant vision of hope and comfort for me (and I think Aru would agree), while Rudy, his cousin, is a constant source of frustration and annoyance.

In fact, Rudy reminds me of the titular character in the Trials of Apollo series by Rick Riordan. He’s pretentious, oblivious, and cowardly, and yet you can’t help but to root for him.

And it’s when he chooses to stand up for himself and his friends that he shines brighter than anyone else. Rudy experiences a great amount of personal growth throughout Aru Shah and the Tree of Wishes, and I’m excited to see what comes next for him.

Like the other Aru Shah books, Tree of Wishes is full of Chokshi’s characteristic colorful characters, her wonderful sense of humor, and more pop culture references than you could possibly count on both hands. It makes these characters feel as though they could pop into existence, fully formed, at any given time, asking you for help on their latest quest.

The lessons Aru and her friends learn in this installment are important, but there’s no guarantee they’ll be enough to save everybody. We still have two more books to go before this series is over, and a lot could happen in that time.

Aru Shah and the Tree of Wishes explores memories, sacrifice, duty, dreams, and truth. But it’s important to remember there are two sides to every coin, and no matter what the prophecy says or what Aru thinks she knows, secrets abound in a world full of magic and mythology.

What did you think of ‘Aru Shah and the Tree of Wishes’?