We use cookies to ensure that we give you the best experience on Hypable. If you continue to visit us, we will assume that you are happy with it.
1:30 pm EDT, April 18, 2021

Of course, most of the weekly superhero discourse is centered around the other major superhero show that features two major movie stars and is concerned with the ongoing legacy of a vibranium shield, but I’m of the opinion that there’s more than enough room in our collective hearts and minds — not to mention our weekly viewing schedules — for at least one other superhero show.

Invincible has the look of your favorite late 90’s/early 2000s Saturday morning cartoon, but make no mistake — this isn’t a show for children.

That’s not to say it’s just another version Amazon’s other superhero show — The Boys — because even if Invincible isn’t shy with its kill count or the amount of blood it spills, it doesn’t have near the level of cynicism that The Boys has when it comes to dealing with superheroes.

Instead, Invincible gives us something different altogether from the superhero fare we’ve gotten thus far. It’s brightly colored and earnest in a way that superhero fans gravitate towards, but with a sense of realism and grittiness that those who are a bit tired of standard superhero fare will enjoy.

Its characters are wholly original, yet reminiscent of prototypical heroes that will bring to mind long-time fan favorite heroes. However, since its set in its own distinct world, it feels more welcoming to those who don’t have the time or the inclination to delve into 50 plus years of comic book history or to watch 25 plus movies to understand a single storyline.

In short, Invincible is a superhero show that straddles the line between familiarity and novelty, drawing us in with the heroic archetypes and standard villains we’re used to seeing in all the DC and MCU fare we’re treated to, but placing them in a novel superhero universe and writing them into bold and fresh storylines. 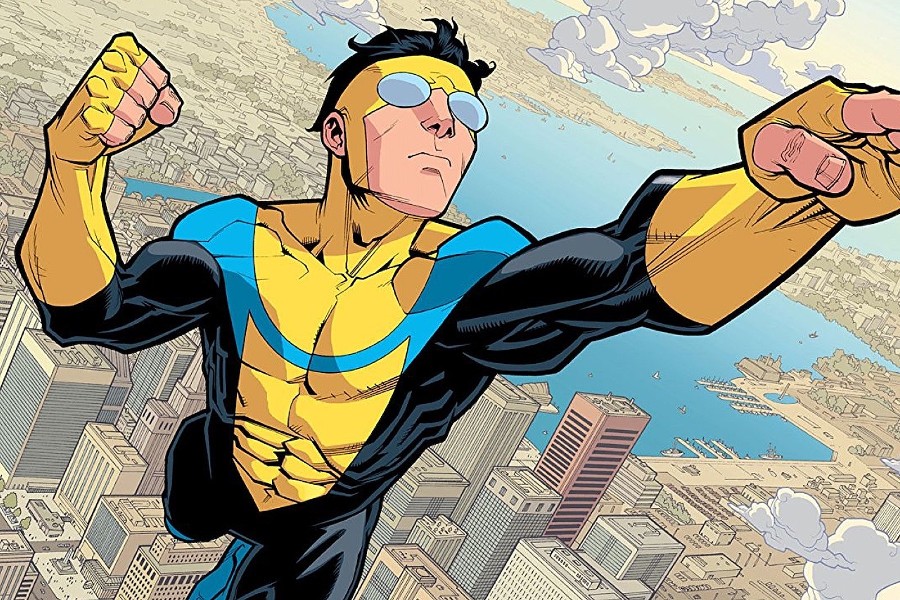 Based on the Robert Kirkman (of The Walking Dead fame) Skybound/Image Comics series of the same name, Invincible follows Mark Grayson, who is your everyday, average 17 year old whose father happens to be the most powerful superhero on Earth, Omni-Man.

Ok, so maybe Mark isn’t actually that average — especially not when he develops powers of his own and starts training with his father to become a superhero in his own right.

Steven Yeun plays Mark Grayson, aka Invincible (which is totally a name a 17 year old would give himself), with J.K. Simmons playing his father, Nolan Grayson aka Omni-Man, and Sandra Oh playing his non-superpowered but badass mother all the same, Debbie Grayson.

That’s a powerhouse trio to lead your cast, but the top tier talent doesn’t stop there: Zazie Beetz plays Amber, Mark’s girlfriend who is continuously a victim of Mark’s inability to balance his superheroics with the normality of teen life; Gillian Jacobs plays Eve — aka Atom Eve — a fellow teenage superhero and friend to Mark; Zachary Quinto plays Robot, a — you guessed it — intelligent robot superhero in charge of a new superhero team; and Walton Goggins plays Cecil Stedman, a government agent in charge of the Global Defense Agency (think of him as analogous in some ways to Nick Fury).

That doesn’t even include the smaller parts that employ the talents of Jason Mantzoukas, Mark Hamill, Jon Hamm, Mahershala Ali, Nicole Byer, and Seth Rogen (who also executive produces the show), along with an impressive list of established voice actors like Grey Griffin, Khary Payton, Chris Diamantopoulos and Andrew Rannells.

This means that week in and week out, you’re treated to talented actors bringing those stories and these characters to life. There isn’t a weak link in the expansive cast, and both the major and minor characters are voiced with emotion, enthusiasm and nuance. 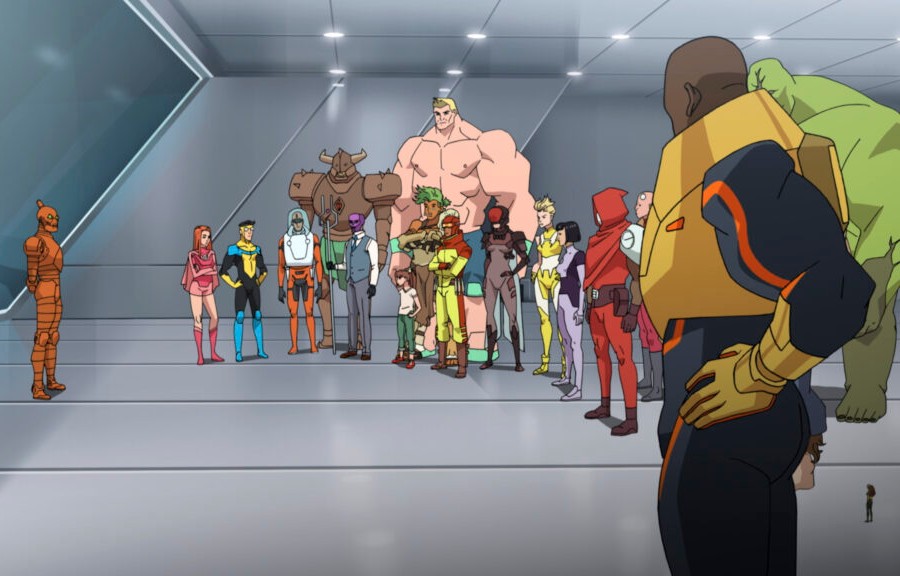 Invincible tells a lot of different stories, and it’s a credit to the writers that it never feels muddy or disjointed.

Invincible is part coming-of-age storyline that we’ve seen time and again in superhero stories, with Mark simultaneously struggling to live up to the legacy of his father (who, as a superpowered alien from another universe, is obviously meant to parallel Superman) and struggling to balance his personal life and professional life.

Invincible is also a pretty standard villain/earth destroying event of the week superhero show, and provides us with all the familiar beats of a superhero universe.

There’s the premiere superteam that saves the world time and again — The Guardians — who are obviously meant to be analogous to the Justice League or The Avengers. There’s the Teen Team, who Mark teams up with a few times and who could be analogous to any number of teen teams littered across the Marvel and DC universes. And, of course, there are a glut of villains introduced in the first few episodes with whom we could easily draw parallels to about half a dozen or so Marvel and DC supervillains.

However, what makes Invincible interesting and worthwhile to watch is the fact it never aims to be a dollar store copy of those universes, nor does it seek to deconstruct them.

Rather, it pays homage to these established archetypes and character beats from the big two universes so that it can build its own unique universe quickly and easily. We’re introduced to a whole slew of characters in a brand new world, but because of the recognizable archetypes, it never feels confusing or overwhelming. Rather, Kirkman and his writers are able to create a distinct universe of superheroes and villains that feels wholly lived-in and lush.

You don’t see the seams of this universe the way you might expect given that it’s completely new; rather, it feels just as established and grounded as a comics universe with 50 plus years of history and storytelling to it. 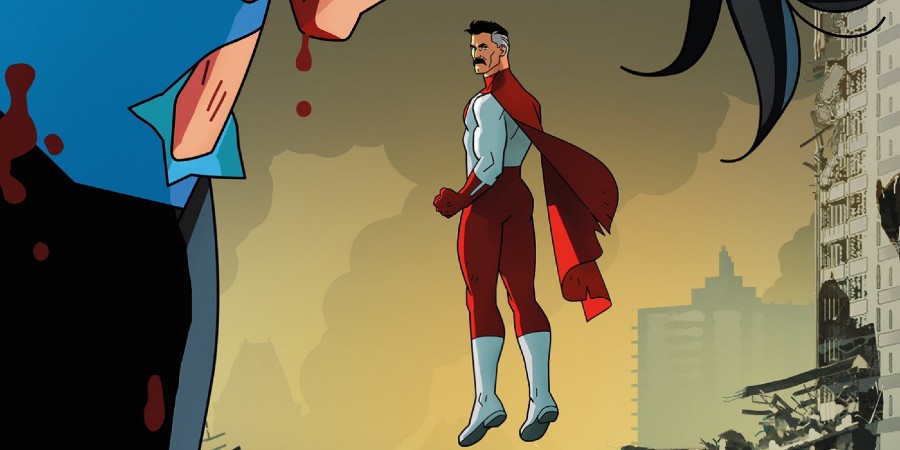 That’s a credit to the writing and world building of the show, which introduces interesting characters like War Woman, Monster Girl and — my personal favorite — demon detective Damien Darkblood and deftly intertwines their character background and arcs with the storylines and action scenes.

This means that the pace of the show zips along at a steady clip, giving you enough to get you going and trusting that you’ll be able to keep up as the story goes on. For a show with a brand new universe of characters to introduce, Invincible isn’t overly concerned with giving you loads of exposition because it assumes a certain level of cultural literacy with regards to superhero storytelling tropes and archetypes.

Rather than getting bogged down in exposition, Invincible drops you in the middle of the world and expects that you’re both familiar enough with superhero tropes to get what’s going on and also smart enough to pick up the rest along the way.

That means it can dedicate ample time to developing its storylines — both primary and secondary — and building out its character arcs. Invincible doesn’t just mimic the animation of the best Saturday morning cartoons, it also seems to be building its season like them. That means that the show gives us great individual episodic storytelling while also building what looks to be a fantastic season-long arc.

I know that’s what television is generally meant to do, but more and more it seems like ‘serious’ TV has framed itself merely as an 8 or 10 hour long movie. Invincible is a show that takes itself seriously, but uses the medium of television to its advantage.

The one hour runtime per episode leaves plenty of time for Invincible to craft fun adventures for its burgeoning superhero protagonist, giving us the highs and the lows of being a brand new superhero, while also developing a few interesting season long arcs that have to do with the mystery behind a superhero slaughter and the construction of a brand new superhero team. 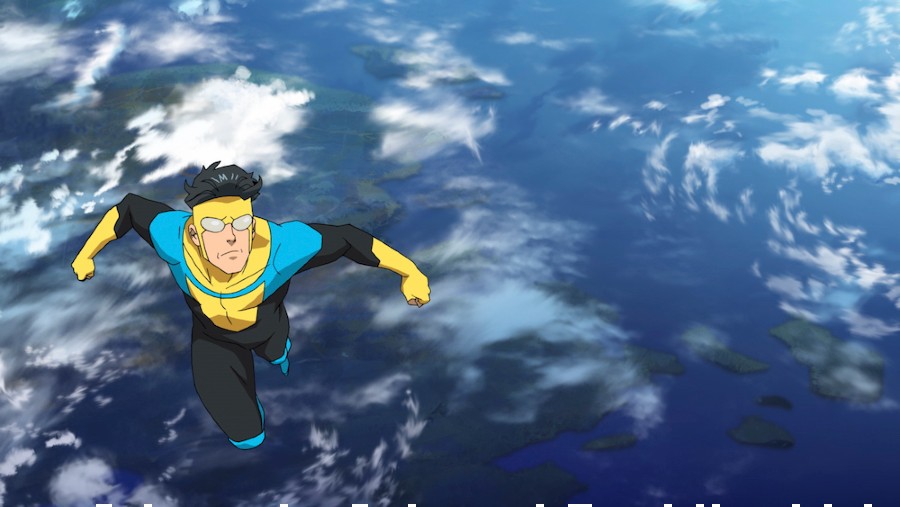 What makes Invincible such a fun and engaging show to watch is that it’s so clearly created by someone who has read and watched a lot of superhero storytelling but hasn’t grown cynical of it, and has a writer’s room that so obviously has a love of superheroes, but isn’t blindly devoted to a specific ideal.

And because Invincible is set in its own distinct world of superheroes, it doesn’t have to worry about being tied to what came before or a specific tone or an event that will occur three years down the line.

It offers us a world that is as recognizable and feels as familiar as what DC and Marvel have to offer, but without the constraints those two universes sometimes place on their properties.

Invincible shows us that there are plenty of superhero stories to tell beyond the DCEU or the MCU, and that those superhero stories can be just as evocative, exciting and engaging — even if the heroes are named Omni-Man, Black Samson and Robot instead of Superman, Iron Man or The Vision.

The first six episodes of Invincible are currently streaming on Amazon Prime, with a new episode released every Friday!Do you agree with our Invincible review? Let us know in the comments below!