We use cookies to ensure that we give you the best experience on Hypable. If you continue to visit us, we will assume that you are happy with it.
9:05 pm EDT, June 28, 2019

The episode, titled “Toldja,” returns to the season’s dual narratives, splitting time between the expanded Earthbound story and the condescend space adventure. Crises of confidence, fortuitous meetings, farewells, and for some reason, guillotines all nudge things along as Agents of S.H.I.E.L.D. season 6 begins to narrow its focus. But first…

At the Lighthouse, May brings Sarge to the control room, where the Coulson lookalike is met with shock and distaste by Daisy. Mack begins the fruitless process of trying to wring information from Sarge, but Sarge confidently sticks to his refrain that doom is nigh unless he is released.

Elena speaks with Jaco in his cell. Jaco struggles to breathe, but tells her of how his world and family were destroyed; he owes his life to Sarge, and refuses care while the boss remains in S.H.I.E.L.D. custody.

Mack interrogates Sarge, but gets no information on his name or origins. Sarge says that Earth does not have to be destroyed, but the shrike’s creator is coming and S.H.I.E.L.D. is unprepared to take on this god-like enemy. He also informs Mack that he will be in charge by the end of the day.

So, you know, shots fired.

Deke follows Daisy around like a flirty puppy, ultimately learning the truth about what happened to Fitz. He confronts Mack, insisting that he would have gone on the Fitz-finding mission. Mack acknowledges this and asks Deke to crack Sarge’s shrike tracker.

Mack takes May’s advice and throws Sarge for a loop by confronting him with the hologram of Coulson. He urges Sarge to save Jaco’s life by cooperating, but Sarge declines, further infuriating Mack with his apparent disregard for human life.

Daisy and Mack have confer, and he confesses that he is struggling as Director. Daisy assures him that Coulson struggled too, but hid his problems from the team. She urges Mack to get back together with Yo-Yo, as the two are clearly still in love. Deke interrupts to reveal that he has hacked the tracker and located two shrike. May and Elena leave to collect the victims and hopefully save them from the parasitic alien birds.

Agent Khan checks on Jaco, who has stopped breathing, but revives to begin EXHALING LITERAL FIRE. Daisy and Mack rescue Khan and knock out Jaco, and Mack takes the opportunity to rub the plan’s failure in Sarge’s face. He also informs Sarge that the two shrike have been safely apprehended, and Sarge feigns being impressed.

Up in the Zephyr though, the two shrike react to their proximity, eventually erupting into a huge mass of crystal spikes with no sign of stopping. Elena and Agent Diaz are trapped in the cargo bay with the containment pod, and May radios the base for help. An agonized Mack brings in Sarge, who only reveals that cold can kill the shrikes once Mack — stuck between keeping Sarge leashed and losing May and Elena — agrees to release his truck and crew. The gambit works, and when Daisy asks for their next move, everyone in the control room, including Mack, turn to Sarge for an answer.

Meanwhile up in space, Enoch, Fitz, and Simmons find themselves once again stuck in the House of Games on Kitson. They attempt to blend in, but quickly apprehended. The man in charge, Mr. Kitson, sentences Fitz and Simmons to death and plans to send Enoch to the brothel.

Simmons and Fitz are laid into guillotines, along with the bluffing, Daisy-gazing space trucker. They all hold the chain attached to their incredibly heavy blades, and the crowd bets on who will decapitate themselves first.

Luckily, a red-haired woman approaches Kitson and demands, with her knife, to buy the two Terrans. Kitson concedes and releases the trucker’s blade, surprising but delighting the crowd.

The woman identifies herself as Izel, and informs the trio that they are now her new crew, as she is seeking “valuable artifacts” that have been “stolen” from her possession — and just so happen to be on Earth. Delighted, Fitz and Simmons help Izel commandeer Fitz and Enoch’s former ship from the puffy-chomping crew.

With Fitz and Simmons settled, Enoch turns to leave. His mission now is to find a home for his people — but he gives Fitz a way to contact him, just in case.

Insofar as Agents of S.H.I.E.L.D. 6×07 serves as the midpoint of the 13-episode season, “Toldja” is, in its own way, almost as unusual as last week’s deep-dive into the minds of Fitz and Simmons. It may not seem like it on initial survey, as “Toldja” returns to the ordinary motions of the series; mystery and adventure on Earth, peril in space.

But like “Inescapable,” Agents of S.H.I.E.L.D. 6×07 is more pointedly concerned with what’s going on within its characters than the spike-happy alien birds and slightly more normal aliens around them.

This has the effect of emphasizing the odd pacing that has characterized the season so far. Plot has taken a definitive backseat to character, and Agents of S.H.I.E.L.D. has diverted from the action several times to relish in its own capacity for wackiness. From a character angle, the experience has been rather giddily delightful, especially given the generally moody tone that has characterized the show for much of its run. But there’s no question that fans who prefer a consistent engine of story have been left with less material than usual.

“Toldja” acts like something of a melange of the experiential absurd (Simmons, Fitz, and Enoch’s adventures back on Kitson) and the psychological, with a few small revelations and tiptoes forward in the story. (Namely Izel’s introduction, knowledge of how to kill the shrikes, and the fact that JACO CAN LITERALLY BREATHE FIRE. GUYS.)

Like Coulson before him, Mack grapples with the weight of his position, torn between his responsibilities to S.H.I.E.L.D. and what he owes the agents who have such a firm hold on his heart. All of Mack’s choices in Agents of S.H.I.E.L.D. season 6 have balanced along the thin line stretched between those two poles. Unfortunately, where being face-to-face with Sarge had previously tormented May and horrified Daisy, it seems to have actively interrupted Mack’s equilibrium. 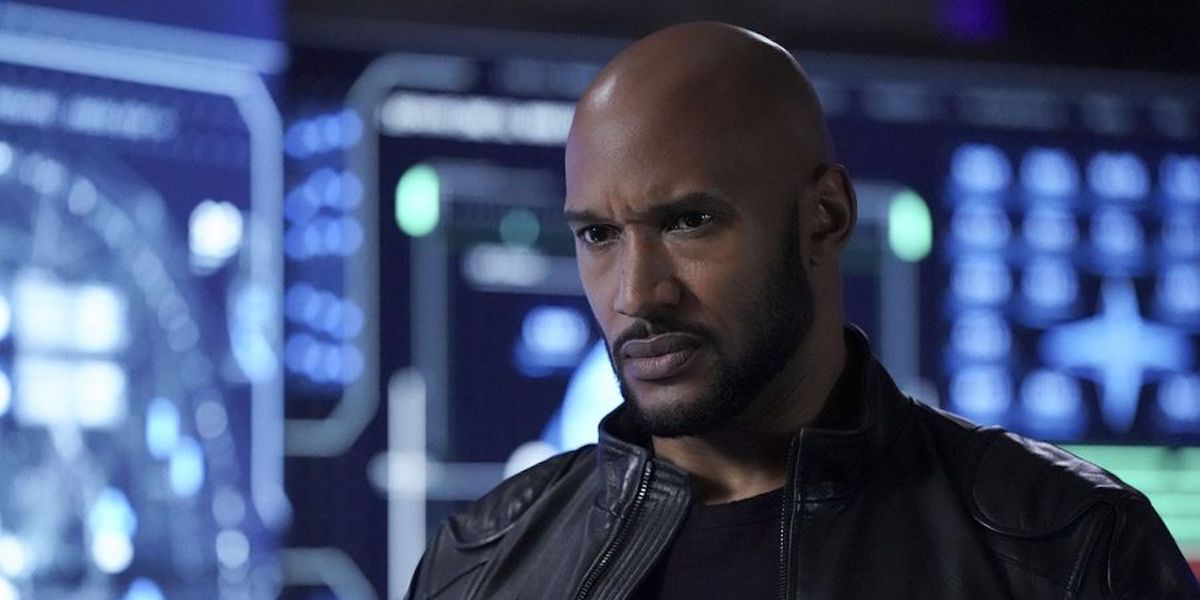 The combination of his mentor’s strange re-materialization, guilt at earlier failures, and the fact that Sarge holds the keys to so many urgent mysteries seems to have deeply shaken Mack’s confidence in his own leadership. There is a reason he turns, with rage, anguish, and confusion, to Sarge when he sees his agents doing the same. Terrified of not being able to do right by his team, Mack is forced to concede at least some of his control to the man (or creature) who can.

As for Sarge, “Toldja” stubbornly maintains the shell of mystery around Coulson’s doppelgänger. The man is a broken record and a stone wall all in one; so convinced is he of his mission’s rightness that there is literally nothing Mack can do to wring out any information on his existence.

Sarge’s mission is all that matters, and so the mysteries he hides behind that familiar face have seemingly no emotional hold on this strange creature. Confronting the life-sized hologram of Coulson may have a fractional effect, but it hardly stands up to the overwhelming advantage he wields over Mack and S.H.I.E.L.D..

Mack and the team are in a war against time. All Sarge has to do is wait.

Thanks to events in space, it seems like that waiting might be coming to an end. The mysterious Izel offers very little information about herself, though she seems affable enough on the surface. But with the unspoken “creator” of the shrikes on the way, and Izel coincidentally heading to Earth in search of her own “stolen artifacts,” it’s difficult not to suspect that Fitz and Simmons’ salvation might not be delivered by the very force that could be their planet’s damnation. 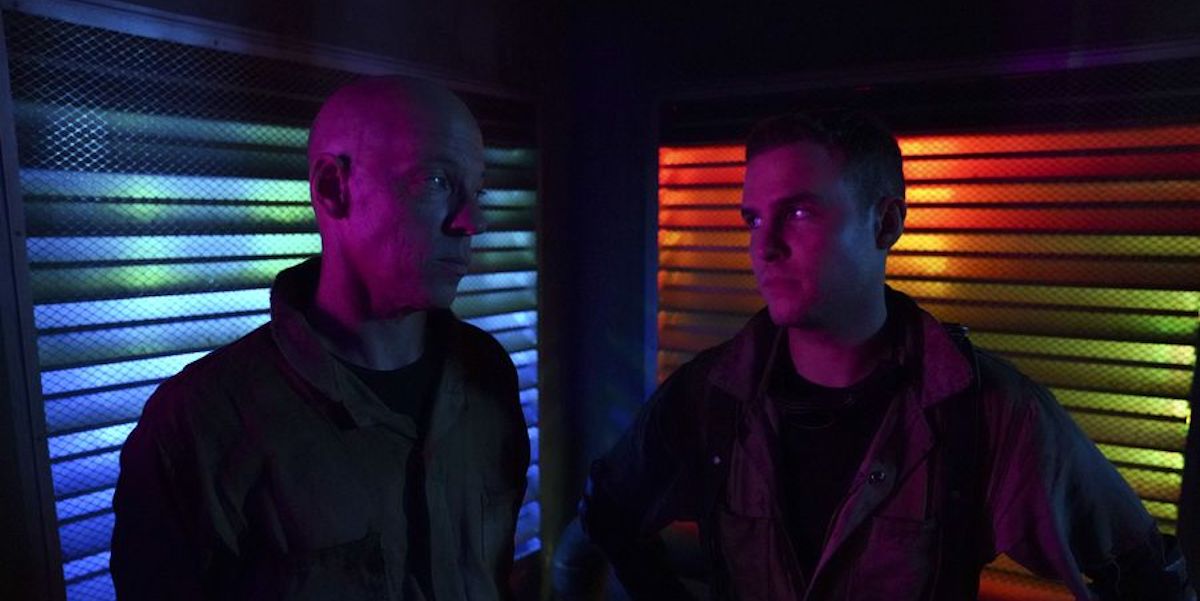 Speaking of Simmons and Fitz, last week’s emotional rollercoaster is followed up with an appropriately lighthearted brush with public decapitation. The heart of their storyline in Agents of S.H.I.E.L.D. 6×07 arrives in the bittersweet stinger, in which Enoch bids his friends adieu in order to save to surviving Chronicoms. It’s a sweet resolution to Enoch’s predicament (and the fact that Agents of S.H.I.E.L.D. has avoided but not downplayed the tragedy of Chronica-2), and adds a touching bow to the Anthropologist’s complicated but powerful bond with Fitz.

That said, Joel Stoffer’s Enoch has quickly become a highlight of the series, so here’s hoping he resettles the rest of his race swiftly, and comes back to play with the rest of the team.

Snowflake: She head butted my face, but I still like her.

Sarge: Everyone seems to have a lot of feelings around here.

Fitz: In my experience, this establishment is good for one thing —
Simmons: Waves of euphoria.
Fitz: –trouble. Wait, what does that mean? Is there something you’re not telling me?

Mack: S.H.I.E.L.D.’s dealt with a lot of folks who thought they were gods, who just had egos.

Daisy: You know who Jordan is, right?
Deke: Do I know… he changed everything! He’s a revolutionary. Because he… invented shoes.

Enoch: You humans have a saying: ‘Goodbyes suck.’ I thought I’d spare you.