We use cookies to ensure that we give you the best experience on Hypable. If you continue to visit us, we will assume that you are happy with it.
10:00 am EST, January 17, 2020

To be one of the worst movies on Netflix is a certain kind of accomplishment, but 6 Underground earns an even rarer accolade.

Netflix has no shortage of original content, whether it be television shows or movies. Recently they’ve decided to try their hand at the next big action blockbuster with 6 Underground. It didn’t exactly thrill some viewers. 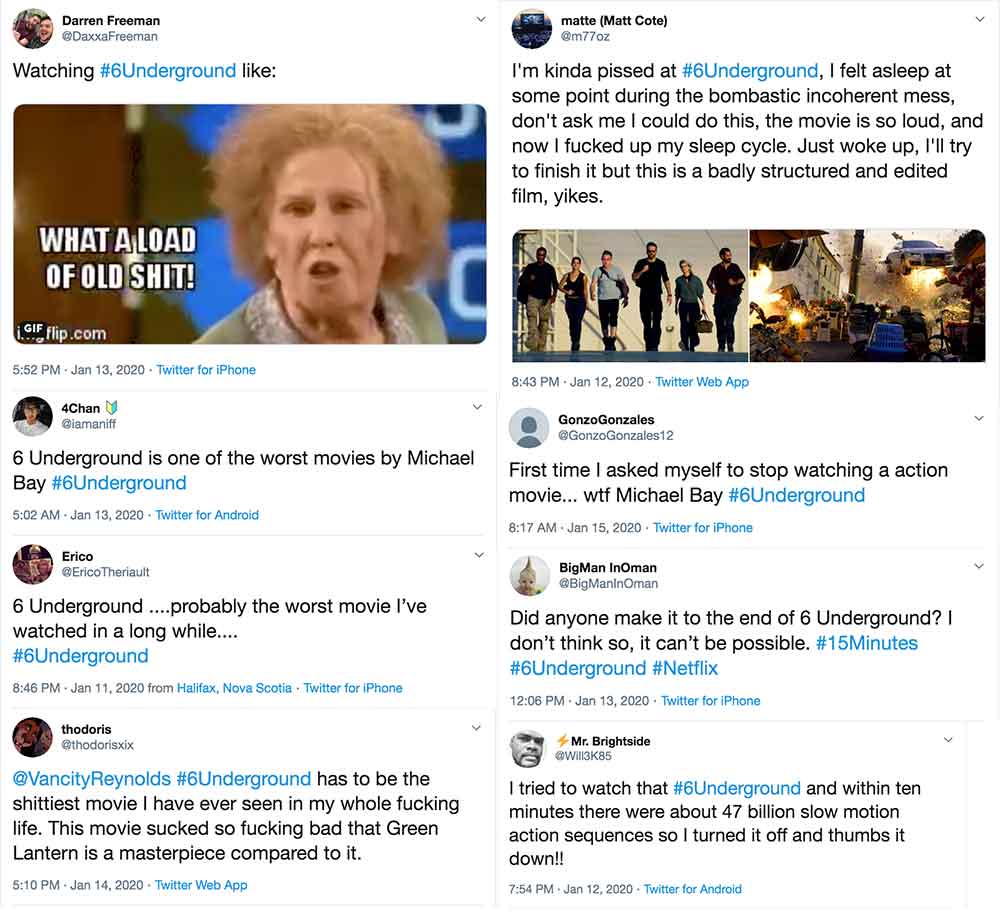 Related: The best original streaming movies of the decade

The cast and characters

6 Underground boasts an impressive cast of actors who aren’t dissimilar to their characters, in that, both are impressive but relatively unknown. Most of this cast can be described as “Oh I know him/her! I like him/her, where have I seen him/her from before?”

Hypable readers will definitely know Adria Arjona as Anathema from Good Omens. There’s also the talents of Mélanie Laurent (Inglourious Basterds, Now You See Me), Ben Hardy (Bohemian Rhapsody), Manuel Garcia-Rulfo (The Magnificent Seven, Sicario: Day of the Soldado), Corey Hawkins (Straight Outta Compton, The Walking Dead), and Dave Franco (Now You See Me, Nerve). Despite such a large cast, each actor makes sure their character stands out in their own light, with distinct personalities that’ll make you inevitably have a favorite and least favorite.

And then of course, there’s Deadpool in a Ryan Reynolds suit, but his name is One. If you’ve seen any other work of Reynolds’, you know what you’re in for with 6 Underground. Love him or hate him, he’s consistent.

You already know you’re going into 6 Underground and getting big action. The official tagline might as well be, “It’s a Michael Bay movie,” because that’s all the internet seems capable of saying. It’s also largely stated as a knock on the movie, as if nobody liked the first Transformers movie, Bad Boys, or Armageddon. There’s a market for people who want style over substance, who just want to let their brain melt to explosions after a long day. If you’re one of those people, 6 Underground is absolutely the best movie on Netflix for you.

While the middle of the film is packed with action, it’s the bookends of 6 Underground that make it the best, worst movie on Netflix. You’re thrown into overdrive the moment the film begins, and it’s unrelenting speed, violence, and explosions for the next 15 minutes. Do you know what’s going on? Not really. Does all of it make sense? Not really. Does it matter? Not really.

6 Underground is unashamedly not trying to be clever or deep, it’s just action for the sake of action because it’s cool.

Likewise, the final mission at the end of the film is so fun to watch, you hardly care whether it makes sense or is plausible. Yeah bitch, magnets!

6 Underground is written by the same guys who wrote Deadpool and Zombieland, Paul Wernick and Rhett Reese. It’s easy to not know that though, because all anyone keeps repeating is, “it’s a Michael Bay movie.”

Michael Bay may be the director of 6 Underground, but people seem to forget the director is not the only person involved in making a movie. It’s true the action is a large portion of the enjoyment of this film, but so too is the comedy. If you liked Deadpool, this movie is worth a watch. In all honesty, it isn’t as funny as Deadpool, but “not as good as Deadpool“ is a far cry from “worst movie on Netflix.” It’s the same brand of humor though, so if you ever wanted to see Deadpool unmasked as Ryan Reynolds, then this is your speed.

Related: The best original streaming shows of the decade

Of course the characters are funny, and each have their moments of comedic relief. The real laughs, however, come during the big action sequences. When chaos reigns, streets are burning, and blood is pouring, you’d hardly expect to be laughing as much as you do during 6 Underground. Whether the mission is going as planned or not, you can count on a one-liner from one of the ghosts to break the tension, or a well-timed action sequence that’s so ridiculous it’s hilarious.

If the visuals aren’t enough to energize you, the music will tip you over the edge. With selections from Muse, The Score, Awolnation and many more, the soundtrack of 6 Underground alone makes it one of the best, worst movies on Netflix. It’s the kind of music that gets your heart pumping even if you’re just sitting on the couch.

The score by Lorne Balfe isn’t anything to fall asleep to either. It may not be the most original music you’ve ever heard, but the pounding drums keep the high octane energy of the film consistent throughout, and complement the vigorous pop songs well.

In all honesty, the story doesn’t matter. Nobody is going into 6 Underground for a compelling narrative with thought-provoking subtext that keeps you thinking even after the movie is finished. Fortunately, 6 Underground mostly knows that.

It’s a simple plot about morally gray good guys taking down an evil dictator, sprinkled with a very blatant message about altruism. There’s no nuance, no thinking necessary, just a story about good versus bad. Maybe an unoriginal plot makes it one of the worst movies on Netflix. It certainly won’t be winning any screenwriting awards anytime soon, but sometimes people just want to watch things explode on a Friday night and call it a day.

6 Underground is definitely not for everybody, but rarely, if ever, is a movie for everyone. If you have a free night at home, and are in need of something to destress after a long week, 6 Underground could be perfect for you. It demands your attention but not your brain. It’s the movie of choice to relax to, while not at all relaxing.

If you’re able to turn your brain off and ignore logic and reasoning for two hours, give this a try. You should also definitely watch it if high energy action and Deadpool humor is up your alley. 6 Underground never tried to be the best movie on Netflix, it just aimed to be two hours of fun. In that, it succeeds in being the best, worst movie on Netflix.

Do you think ‘6 Underground’ is the worst movie on Netflix?